Who and why chooses the path of terror 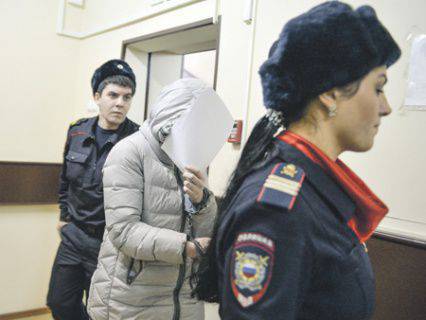 It so happened that I had to discuss with the famous journalist Maxim Shevchenko, who reposted the material on Facebook under the heading "How the FSB turned an athlete and a pupil into a terrorist." It was about a Moscow State University student, Varvara Karaulova, who tried to go over to the side of the Islamic State (IG) banned in Russia, but, in the opinion of a respected colleague who became a decoy of the FSB. The topic, especially in connection with the latest events, seemed to me important. Especially since, looking at the statistics, I found the following data. According to Rosfinmonitoring, in 2013 – 2014 more than 3,5 thousand Russian citizens sent money to terrorist groups. Financial assistance was sent from the 80 regions of the country. For the two years indicated, 40 million rubles were spent on the maintenance of terrorists, from January to early September 2015 only 300 million left the country to support the IG. According to the Interior Ministry, announced at the recent press conference Head Vladimir Kolokoltsev, 1800 Russians.


WHAT RADICALISM IS ATTRACTIVE

Indeed, why do people become radicalized? After all, the fate of the same Barbara would most likely be unenviable if she managed to cross the Turkish-Syrian border and join the ranks of the IG. She would have become a concubine or a lively bomber bomb, and maybe both.

Of course, only very naive people or simple duels can believe in FSB intrigues (although a Russian proverb on this subject is also known). With the current level of technology to identify recruiters of IG in social networks, live decoy ducks are not needed. Now, all the police of the world of pedophiles are revealed with the help of avatars, without resorting to the help of real people. It is clear that it is not the FSB that makes potential terrorists out of “sportswomen and women pupils”, but who or what really?

In this regard, other examples of intention not already averted, but the direct participation of Russians in the activities of the IG deserve attention. It is about the executioner from Noyabrsk, 28-year-old Anatolia Zemlyanka. He became the hero of the video, in which he cut off the head of 23-year-old Russian Magomed Khasiyev. It is known that the Dugout left the Yamalo-Nenets Autonomous District in June 2013. In Noyabrsk, he left his parents and brother Taras Zemlyanka. Anatoly Zemlyanka, nicknamed Jihadi-Tolik, graduated from school number 3 in the city of Noyabrsk, Yamalo-Nenets Autonomous District. And although, unlike Varvara, he studied mediocre, but he entered the Tyumen University and went in for sports.

I must say that in our editorial office these cases caused a lively discussion. Special sympathy caused Barbara. Not everyone had the idea of ​​how a gold medalist of the Russian school and a university student could find herself voluntarily in the networks of jihadists.

I think that the search for an answer to this question is important given the spread of terrorism throughout the world. But here it is necessary to see two aspects, why people underestimate (or do not understand) the danger of terrorism and especially the disastrous consequences both for the individual and for the society to go under his banners. And on the other hand, to understand what pushes young people to such a fatal step. And it seems to me that these are sides of the same coin.

The first question I, in fact, answered at the beginning of the article. This is characteristic of the Russian intelligentsia (and after all, almost everyone who has a crust on higher education considers himself an intellectual) a distrust and a critical attitude to power. Incidentally, the Russian philosopher Berdyaev spoke about such intellectuals. In his opinion, “this kind of world, which until now has been living a closed life under double pressure, pressure from external — reactionary power (Berdyaev spoke of the power at that time, but my opponents, of course, mean today's. - NVO) internal - inertness of thought and conservatism of feelings, not without reason is called "intellectuals", unlike intellectuals, in the broad, national, general historical sense of the word. " From what Berdyaev said in the XIX century, a lot, in my opinion, is true in the XXI.

Now let's analyze the way of a young man to terrorists. Statistics claim that in 2014, 32,6 thousand people died at the hands of terrorists. These figures are indicated by the study “International Terrorism Index”, which, according to the BBC news agency, recently published by the Australian Institute of Economics and Peace. This is 80% more than in the 2013 year. Compared to 2000, the number of victims of terrorist attacks in the world has increased ninefold.

The British Agency BBC published on this subject a collection of materials on the study of this problem by famous scientists. If to summarize their conclusions, the agency notes, then mainly educated people from the middle class are at risk. And the risk situation becomes the political situation in the country where the person comes from. Civil wars, armed conflicts, or excessive restrictions on citizens ’freedoms often stimulate terrorism. Thus, according to UN expert Nassra Hassan, who worked in Iraq for 1996 – 1999 and interviewed suicide bombers who did not succeed in the attack, ordinary members of terrorist organizations, as well as members of their families, mainly received a good education. They were led by religious beliefs, as well as political motives. This provision fully corresponds to the social status of the Russian Varvara and Anatoly.

It is also known that the ideas of serving the IG they came through the Internet. In 2010, Anatoly started a page on the social network VKontakte. There he appeared under the name Tolik Taymulla. The latest entries are dated 2011 year. The last status of the dugout: “Cry of a man is the tears of a lion!” From the point of view of psychoanalysis, in this case we are talking about obvious dissatisfaction with the current status and an attempt to assert itself on the basis of a revaluation of values.

What is important in this case for this category of young people? The barbarian, apparently, could not draw the line between absolute evil, which is the IG, and good. Anatoly deliberately chose evil. In other words, their basic values ​​(if any) turned out to be very conditional. By and large, the basic Christian commandments can be attributed to these values: do not kill, do not steal ... and basic human sins: pride and others.

As is known, the question of the path to terrorism occupied Russian writers in the nineteenth century. In this regard, it suffices to recall the famous "Demons" of Dostoevsky, where a generalized type of revolutionary terrorist was derived at that time. It is said that Russian nihilist Sergey Nechaev, who compiled the Catechism of a Revolutionary, was a prototype of his, a unique document in stories terrorist and revolutionary movement. By the way, Vladimir Lenin spoke rather favorably about this terrorist. Judging by the approach, terrorists of the last century and the current Islamic terrorists were distinguished only by the proclaimed goal. They had no other differences. Fanaticism was their guide to action. But fanaticism is not born from scratch.

THE MAIN RISK IS A SILENCE OF SOCIETY

Scientists name several potential causes pushing people to terrorism. One of the first to present his version was a Harvard scholar Alberto Abadi in his work on 2004 of the year. He believes that the matter is political freedom. At the heart of the work of a Harvard scholar is the International Terrorism Index, calculated by the World Market Research Center for 186 countries of the world. With this indicator, Abadi identified the terrorist risk for each country: how likely a terrorist attack is in it. He compared this indicator with GDP per capita, the Human Development Index, which takes into account incomes, the level of health and education of people in countries, and the Gini coefficient, which measures the level of stratification in society. In addition, he compared the terrorist risks with the Political Rights Index, which is calculated by Freedom House. It turned out that the latter to the greatest extent explains the risks of terrorism.

In countries where political rights are too limited, terrorist risks are very high. Such countries include most of the Middle East, Africa, Asia and Russia.

However, the risk turned out to be high for countries with a low index value, that is, where the political rights of citizens are almost unlimited. These liberal democracies include much of Europe and the United States. In the security zone, there are only states with a moderate level of political freedom, which are not many in the world.

But what about a student of the Faculty of Philosophy of Moscow State University or a student of the Tyumen technical college? What criteria do they fall under? Formally, everything can be explained by the very index of political rights - after all, Russia is in a risk zone. And, probably, the transition of the Caucasian underground to the side of the IG is connected, among other things, with a similar factor. But, in my opinion, factors such as the lack of spirituality of existence, a divided family (in the case of Barbarians), when there was practically no time for the development of a person, a limited outlook and a primitive environment, typical just for many Russian schools and universities. They created a kind of spiritual vacuum into which any ideas could be successfully introduced: from Muslim fanaticism to exotic religions or the teachings of the god Kuzi (a semi-literate impostor who had recently exposed his own sectarian teaching).

In this regard, for the prevention and prophylaxis of such phenomena, I think two aspects are important - the efforts of the state and the efforts of the public. From the point of view of the state, attention is drawn to the state program of patriotic education of Russians up to 2020, which caused a lot of comments in the media, including negative ones. But really, the cases of Barbara and Anatoly show that patriotism in the country is far from being at the highest level and previous efforts to bring it up cannot be considered effective. The propaganda of the eternal, humanitarian values ​​today is probably easier to carry out precisely from the standpoint of the church. And what kind of church it will be: Orthodox or Catholic, Muslim or Buddhist - does not play a special role. The humanitarian essence of their message to society is important.