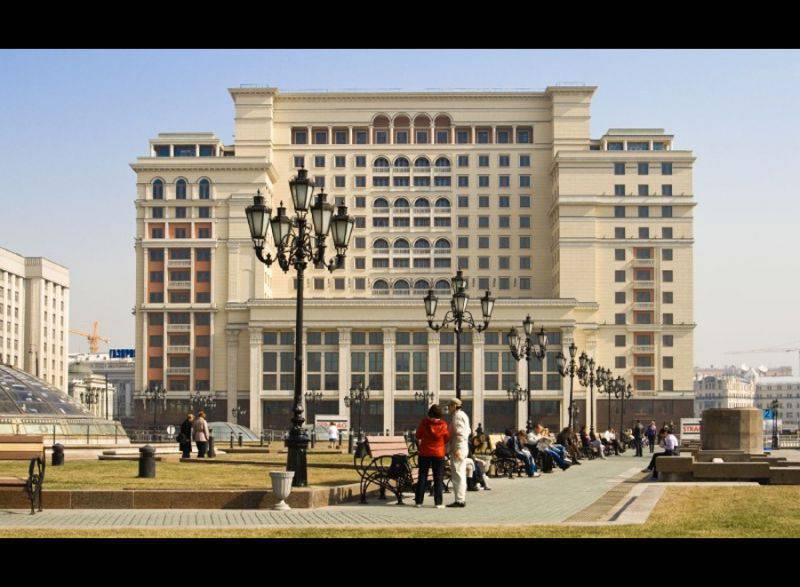 In the 2004 year, under Luzhkov, the Moscow Hotel on Manezhnaya Square was demolished for obscure reasons. This action was called the "reconstruction" by the Moscow authorities. The official version of the reasons for the demolition was the allegedly morally outdated planning solution (the hotel rooms were too small and did not meet the “modern standards”) and the alleged impossibility of reconstruction without complete demolition of the building. Anyone, even a beginner, an architect will immediately tell you that this is complete nonsense. It could be elementary to solve the problem by banal uniting two or three rooms into one without any damage to building structures. The whole point is that this "problem" was not the real reason for dismantling. In the opinion of Vyacheslav Glazychev, a professor at the Moscow Architectural Institute, the purpose of “reconstruction” was theft, since there were no objective reasons for the demolition of such a giant building in the very center of Moscow, built only at the beginning of the 30 of the 20th century, whose designs were in satisfactory condition and could consistently serve another good hundred years. Indeed, in the process of “reconstruction”, unidentified individuals stole more than 87 million dollars allocated from the city budget. But, it must be said that on the scale of such a giant construction (more than 185 000 м2) and, given the complexity of the finishing works, the amount of stolen funds is not so glaring. The fact of theft itself is, and the amount on the scale of construction is not. It does not exceed 10% of total costs and a purely technical justification for such an over-expenditure of funds is not a big deal for experienced “builders”.

The Moscow Hotel is located on the place where the Neglinka River flowed in the XIX century. Now it is enclosed in an underground collector. However, throughout the 19th century, flooding of this section with flood waters occurred regularly and only hydraulic structures of the 20th century allowed to finally stabilize the groundwater level in the area throughout the year. The quarter with the Grand Hotel, on the site of which the Moscow Hotel was built in 30, was located at the place where the very bed of the Neglinka once passed. At one time, a pile field of oak piles was made here to strengthen the marshy soil. Huge trunks were driven into the wet ground and, due to the oak's ability to gain strength, being submerged in water, the ground in this area was stabilized, which made it possible to begin capital construction on it in the 19th century. 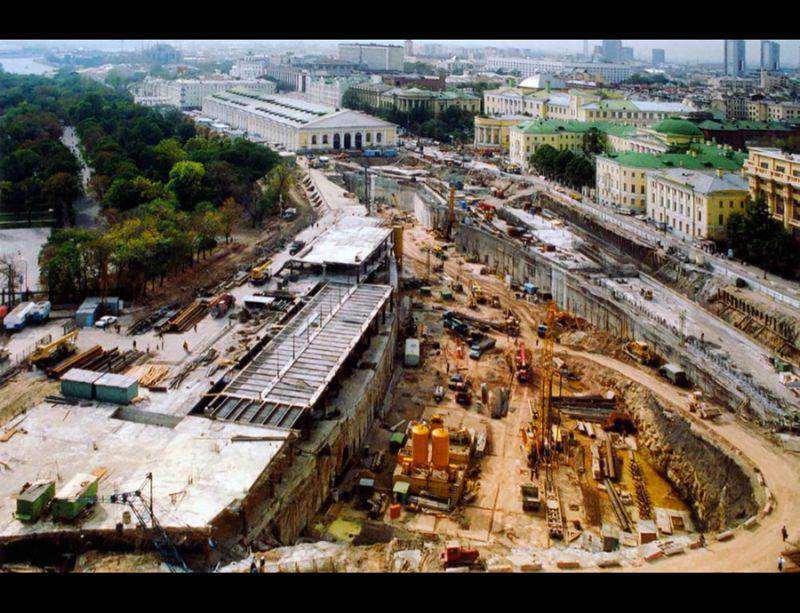 (Construction of the Okhotny Ryad shopping and entertainment center. Archival photo)
In 1995, Yuri Mikhailovich Luzhkov started a grandiose construction on Manezhnaya Square - the Okhotny Ryad shopping center, a complex that goes underground several levels with a lower depth of more than 18 meters from the surface. The construction of one of the largest underground shopping and entertainment centers in Europe, with an area of ​​63 m000, was completed in record time: it took two years to do everything. Even at the beginning of the survey work, many experts voiced the danger of digging such a huge "hole" in the historical center of Moscow, but a quick examination commissioned by the Moscow government showed that historical buildings near the construction site are not in danger. But back in 2002, from the lips of a distinguished academician of architectural and construction sciences, I heard a forecast made by him in a private conversation that if the Moscow hotel is not demolished in the near future, it will soon fall apart ...

During this period, in the immediate vicinity of Manezh Square, the massive 22-storey Intourist hotel complex was located on Tverskaya Street, on the site of which The Ritz-Carlton Moscow Hotel was built in half the size.
According to the academician, this was only the first swallow, which should be followed by the "already sentenced" hotel Moscow ...

I immediately recalled the recent (at that time) events in New York - the terrorist attack on the twin towers. After their collapse, a day later, several massive multi-storey buildings collapsed in the adjacent business districts. 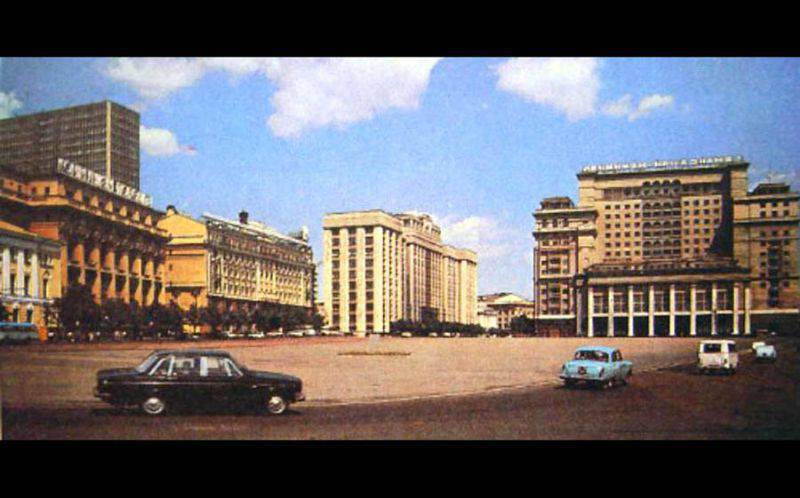 (The square of the 50 anniversary of October (now: Manezhnaya Square). Archival photo. The Hotel Moscow is on the right, the Intourist Hotel’s high-rise building is on the left
As a result of the construction of an underground shopping center, the groundwater level in the Manezhnaya Square was artificially significantly reduced to prevent flooding of the pit. And the oak pile field under the foundation of the Moscow Hotel turned out to be drained. The wooden piles began to rot. This process could take a long time, but its first manifestations were to be expected already in 10-15 years - subsidence of foundations, cracks in the walls, etc. But then the result of an engineering error would have become obvious. And given the concerns expressed by specialists, one could speak not about an error, but about a deliberately negligence or even targeted sabotage. Therefore, after 7 years after the construction of the Okhotny Ryad shopping center, the Hotel Moscow was dismantled for a ridiculous and clearly contrived reason. The prediction of the academic was coming true. Traces of “sabotage” during the renovation were carefully cleaned up - so under the new building a giant multi-level parking lot appeared.

In the same year, 2004, the “Manezh” building “unexpectedly” burned down. These were the two massive capital buildings closest to the Okhotny Ryad shopping center. Both are monuments of architecture. 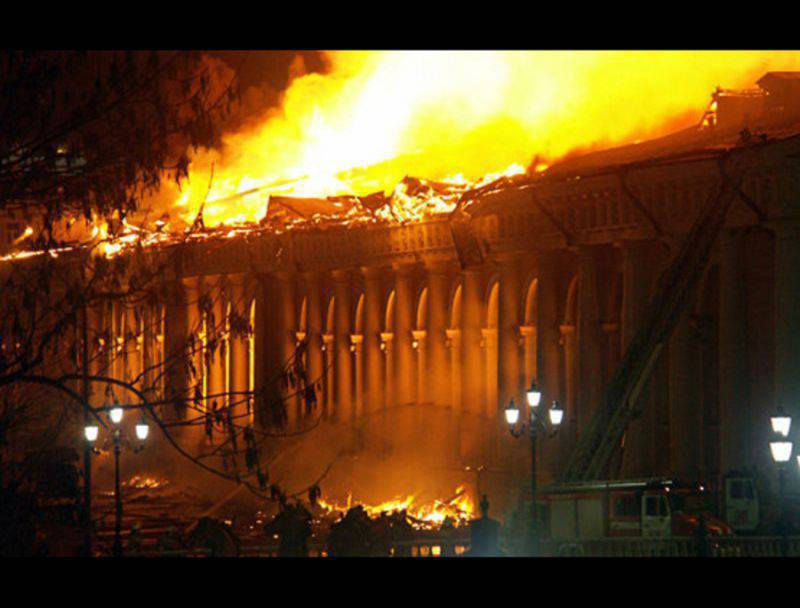 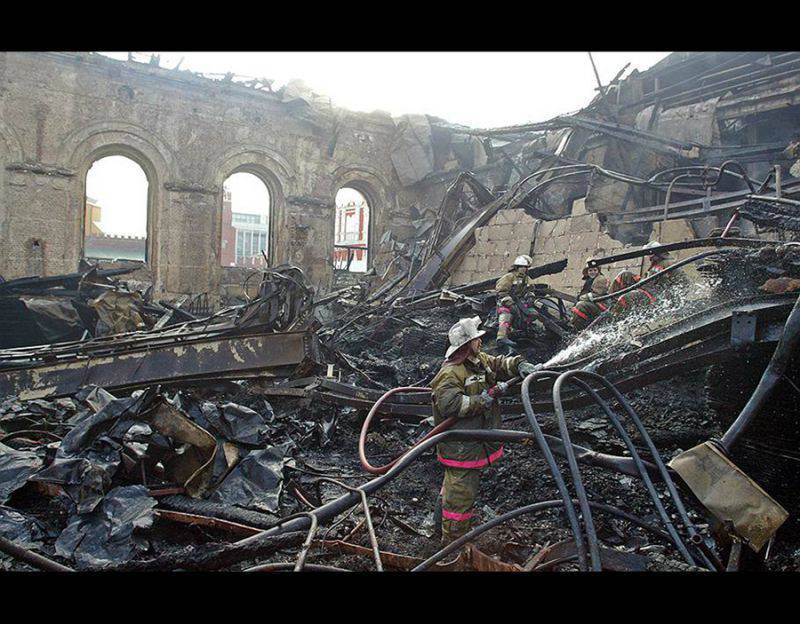 (Fully burnt-out building of the Manege. Archival photo)
According to the official version, the fire started on the roof due to a short circuit and after 15-20 minutes, covered the area in 9 000 м2, as a result of which the building burned out completely. However, the chairman of the Moscow Committee for Culture, Sergei Khudyakov, told Interfax at the time that there was no wiring, as well as electrical equipment on the roof of the Manezh. The very next day after the fire, Luzhkov spoke at a Moscow TV channel, presenting to the public a project to reconstruct the Manezh building in a new “modern” manner. There were drawings, plans, cuts, and even a mock-up with landscaping. And, of course, a new, “salvific” underground level appeared under the renovated building. But did this voluminous project work really be done in just one postfire night !? 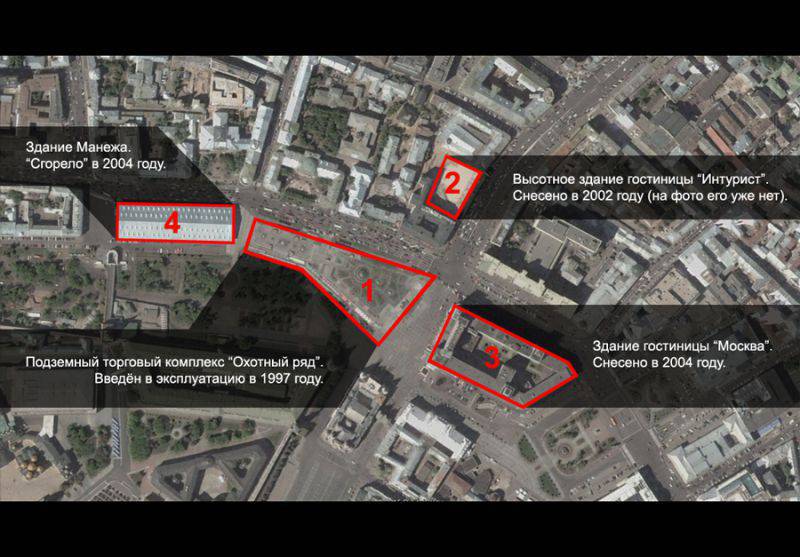 (Manege Square. 2003 space photography of the year)
PS
In 2005, I designed a Moscow apartment for a gallery owner. It contains in Germany a private museum of Soviet photography 20-30-ies and constructivist art. He lives in three countries: Russia - Germany - USA. Rich man. He is still a “bug” - he will never miss her. The contents of the interiors of the former Moscow Hotel (Stalin’s Empire) were extremely interested in him as a collector. He turned on all his connections to try to go out to those who could have purchased these items - chandeliers, doors, furniture, dishes, paintings (there were several paintings in the style of Soviet realism in each hotel room and in the corridors); in a word, he was interested in absolutely everything. I remember how, with undisguised annoyance and great surprise, he told me that he could not find any ends, even a hint, in whose hands all these subjects ended up. All that is now in the interior of the replica - cheap Turkish crafts from shit and plastic. These items have not surfaced since at any auction or in any private collection.