Islands of contention (highlighted in red) on the map. Photo: RIA News
September 2 this year , on the day of the 70th anniversary of the signing of the Act of unconditional surrender and the end of World War II by representatives of the government of militarist Japan, the Russian Foreign Ministry stated a clear statement arising from historical facts and international agreements position on the so-called Kuril issue. Russian Deputy Foreign Minister Igor Morgulov ruled out the possibility of negotiations with Japan over the Kuril Islands in an interview with the Interfax news agency. The following was literally stated: "We are not conducting any dialogue with Tokyo on the" Kuril problem ". This issue was resolved 70 years ago: the South Kuriles passed to our country legally, following the results of World War II. The sovereignty and jurisdiction of Russia over them is beyond doubt. subject to ".

Then this fundamental position of the Russian state was confirmed by Russian Foreign Minister Sergei Lavrov, stating after talks with his Japanese counterpart that the Kuril affiliation "is not a subject for discussion." At the same time, the leadership of the Russian diplomatic department agreed to continue negotiations on the conclusion of a peace treaty between the two countries.

At the same time, let me remind you that Tokyo has for years declared its consent to conclude a peace treaty with Russia only on condition that "the islands of Iturup, Kunashir, Shikotan and Habomai are returned."

Well, let's understand the created diplomatic collision on its merits.

The war dotted i

All Kuril Islands belonging to the Russian Empire since the end of the 18th century - including the southern ones! - By the decision of the Yalta (Crimea) Conference of Heads of State - participants of the anti-Hitler coalition - I.V. Stalin, F. Roosevelt, and Winston Churchill — as a result of the war, were transferred to its former owner of Russia — the Soviet Union. The deprivation of militaristic Japan of these islands also stemmed from the conditions of the Potsdam Declaration, on the basis of which the Japanese government signed the Act of unconditional surrender. The withdrawal of all the Kuril Islands, without exception, up to the island of Hokkaido from the jurisdiction of the state or administrative authority of Japan was also provided for in the Memorandum of Allied Commander General D. MacArthur N 677 / 1 of January 29 of 1946. Then this decision of the allies did not cause the objections of the Japanese government, because it was considered as the realization of the conditions of surrender.

In 1951, the Japanese government signed and then ratified the San Francisco Peace Treaty, in which it "waived all rights, rights and claims to the Kuril Islands and to that part of Sakhalin Island and the adjacent islands, which Japan acquired sovereignty over the Portsmouth Treaty from 5 September 1905 of the year. " This compensated for the territorial losses of Russia (USSR), suffered as a result of the Russian-Japanese war 1904-1905. Moreover, the Japanese government confirmed the refusal of Japan from all the Kuril Islands, including their southern part. And after that, in a joint parliamentary resolution of all parties of the country from 31 in July 1952, the government was given the task of returning Japan only to the Habomai and Shikotan islands, which the Japanese parliamentarians viewed not as the Minor Kuril chain, but as the continuation of Hokkaido.

It was precisely this task that the Japanese Prime Minister Ichiro Hatoyama set before the country's diplomacy, who in 1955 began negotiations with the USSR on the signing of a peace treaty between the two countries.

At the same time, Hatoyama explained that the issue of Habomai and Shikotan should not be confused with the question of all the Kuril Islands, which was resolved by the Yalta Agreement. He recognized that since Japan had abandoned the Kuril Islands and South Sakhalin under the San Francisco Treaty, she had no reason to demand the transfer of these territories to her. Knowing about the position of the Japanese prime minister, after long negotiations, Moscow agreed to make a concession to the territories sought by Japan and to sign not a peace treaty, but a joint declaration on ending the state of war and restoring diplomatic relations.

In the Soviet-Japanese joint declaration signed in Moscow on 19 in October 1956, it was stipulated that the USSR and Japan "agreed to continue after the restoration of normal diplomatic relations ... negotiations on concluding a peace treaty." And this in no way meant, as our Japanese opponents and some of their domestic commentators are supporting them, continue the negotiations on territorial delimitation. After all, the 9 article of the Joint Declaration does not provide any double interpretations: "The Union of Soviet Socialist Republics, meeting the wishes of Japan and taking into account the interests of the Japanese state, agrees to the transfer of Japan to Habomai Islands and Shikotan Island, however, that the actual transfer of these islands to Japan will be made after the conclusion of a peace treaty between the USSR and Japan. "

The fact that this is the maximum concession to Japan, said the initiator of the compromise on the territorial issue, the then leader of the USSR Nikita Khrushchev. On the eve of the signing of the October 16 Joint Declaration, he told the Plenipotentiary of Japan to the Minister of Fisheries, Agriculture and Forestry Ichiro Kono: "The Japanese side wants to get Habomai and Shikotan without a peace treaty and subsequently decide some other territorial issues that we don’t know does not exist. The Soviet government wants to come to an agreement with Japan as soon as possible, and it does not use the territorial question for bargaining. But I must once again quite definitely and to we categorically declare that we will not accept any claims of Japan on the territorial issue, except for Habomai and Shikotan, and refuse to discuss any proposals in this regard ... We cannot and will not make any further concessions. Habomai and Shikotan could be transferred to Japan under a peace treaty, but with the transfer of these islands, the territorial issue should be considered completely and fully resolved. " 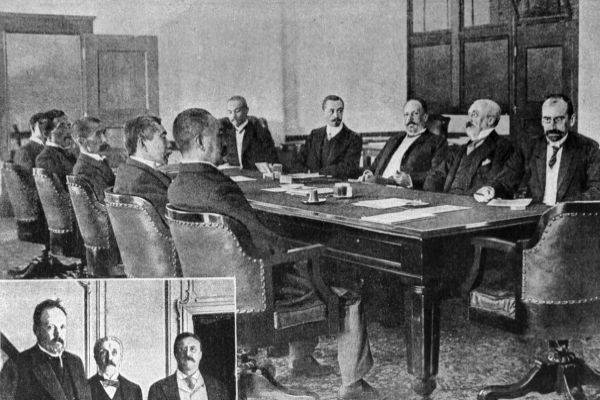 Participants in the signing of a peace treaty between Russia and Japan during a conference in Portsmouth (USA). 1905 g. Photo: RIA News
How did the "northern territories"

Khrushchev rejected the option proposed by the Japanese that the peace treaty negotiations would include a territorial issue. Apparently, it is unknown to those who are trying to argue that, "according to the Joint Declaration, we should continue to discuss the territorial problem with Japan for at least a hundred years."

At the same time, supporters of such a position say that the Soviet Union allegedly conducted such negotiations on the territorial issue for decades. So, to put it mildly, to incompetent people, again, it is not known that the negotiations on concluding a peace treaty envisaged by the Joint Declaration after 1956 by the Japanese government were in fact terminated. With open pressure of the US administration not interested in the final normalization of Japanese-Soviet relations, in violation of the conditions reached in the Joint Declaration, the Japanese government arbitrarily demanded that Japan not only Habomai and Shikotan be returned to Japan, but also the largest and most developed Kuril Islands - Kunashir and Iturup.

The anti-Soviet-minded American and Japanese circles set themselves the goal, putting forward unwarranted conditions that were unacceptable for Moscow and blocking the process of concluding a Japanese-Soviet peace treaty for many years. The situation escalated in 1960, when the Japanese government, instead of a peace treaty with the USSR, against the will of the Japanese people, renegotiated a military alliance with the United States against the USSR and the PRC, confirming the right of the American armed forces to have numerous military bases in Japan.

There was a situation when, in the event of the transfer of the islands of Japan to them, US military facilities aimed at our country could be created. Therefore, the Ministry of Foreign Affairs of the USSR 27 on January 1960 sent a memorandum to the Japanese government stating that "only on condition of withdrawal of all foreign troops from Japan, the islands of Habomai and Shikotan will be handed over to Japan, as stipulated by the Joint Declaration of the USSR and Japan from October 19 1956 of the year. " In response, the Japanese government began to impose anti-Soviet sentiments in the country, accusing the USSR, in spite of signed international agreements, including Japan itself, in allegedly "illegal seizure of originally Japanese lands." From the state budget and big business donations, a fund was formed to finance a noisy campaign for the return of the northern territories. In the face of the Japanese government’s refusal to comply with the provisions of the Joint Declaration, its unwillingness to negotiate the signing of a peace treaty and using Tokyo’s official, fictitious “territorial problem” to escalate hostility to the USSR, the Soviet government stated that this problem did not exist in Soviet-Japanese relations. allowed by the end of the war.

After that, the USSR Foreign Ministry invariably rejected the attempts of the Japanese side to impose a discussion on the artificially created so-called problem of the northern territories.

As for the peace treaty, the Soviet leadership has never refused to conclude and develop relations with Japan. So, in 1977, the General Secretary of the CPSU Central Committee, L.I. Brezhnev noted: "In a joint Soviet-Japanese statement of 10 in October 1973, an agreement was fixed to continue negotiations on concluding a peace treaty. The Soviet Union is ready, of course, if the Japanese side does not put up unacceptable conditions, bring this important matter for our countries With the sober approach of the Japanese side to the realities that emerged as a result of the Second World War, this could be done - and done quickly. " 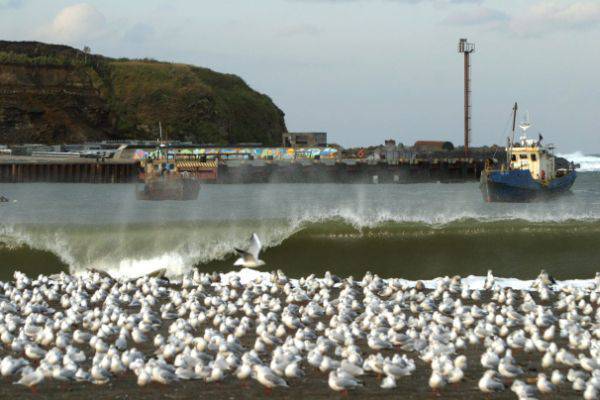 It is gratifying that after decades of vague policy, the current Russian government, following the will of the people, has finally dotted i and reaffirmed the inalienability of its sovereign territories - the Kuril Islands - from Russia. At the same time, it believes that the signing of a peace treaty would contribute to drawing a line under the post-war period and the comprehensive development of relations between the two neighboring states.

The conditions of our country to conclude a peace treaty are known to the Japanese government. They were recently recalled by Russian Foreign Minister Sergei Lavrov, pointing out that progress on this issue is possible only after Japan recognizes the post-war historical realities, including the UN Charter in its entirety. But, as recent events show, Tokyo refuses to recognize these realities, continuing to link the issue of concluding a peace treaty with unreasonable territorial claims.

Well, we lived without a 70 peace treaty for years, we will live still. By the way, we do not have a peace treaty with the main adversary in the war, Germany, and this has not interfered with the development of political, trade, economic, cultural and other relations between the two countries and peoples for decades. 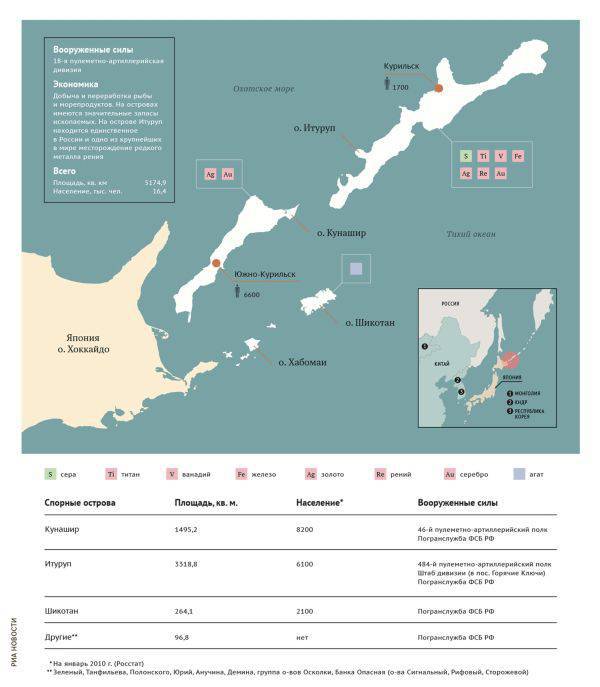 The wealth of the Kuril ridge / infographics RIA Novosti

Ctrl Enter
Noticed oshЫbku Highlight text and press. Ctrl + Enter
We are
Victory Day over JapanWhy there is no peace treaty with Japan
30 comments
Information
Dear reader, to leave comments on the publication, you must to register.