December 30 2015
2
One of the results of World War II was the increased interest of leading military countries in promising anti-tank weapons. The increase in the level of protection of modern armored vehicles has grown significantly, which required appropriate anti-tank weapons. One of the main ways of developing such systems was recoilless weapons, from light hand grenade launchers to large-caliber guns that needed a tractor or a self-propelled chassis. In this area, various attempts have been made to create new military equipment based on existing models. So, in 1945, an interesting project was launched in the United States to develop combat vehicles with recoilless weapons based on existing lightweight chassis tank M24 Chaffee: self-propelled guns M37 HMC and anti-aircraft self-propelled gun M19 MGMC.


The first experiments on installing recoilless weapons on existing equipment, which became the predecessor of the new program, began in the spring of 1945. The first such project involved a slight revision of the design of the new self-propelled artillery installation M37 HMC, which involved the replacement of auxiliary weapons. In the basic version of this machine, built on the base of the M24 tank, the T107 ring turret with attachments for the M2HB large-caliber machine gun was located on the onboard cylindrical body assembly. Like weapon should be used against infantry and aviation the enemy. At the beginning of the 45th there was a proposal to strengthen the firepower of auxiliary weapons of self-propelled guns. 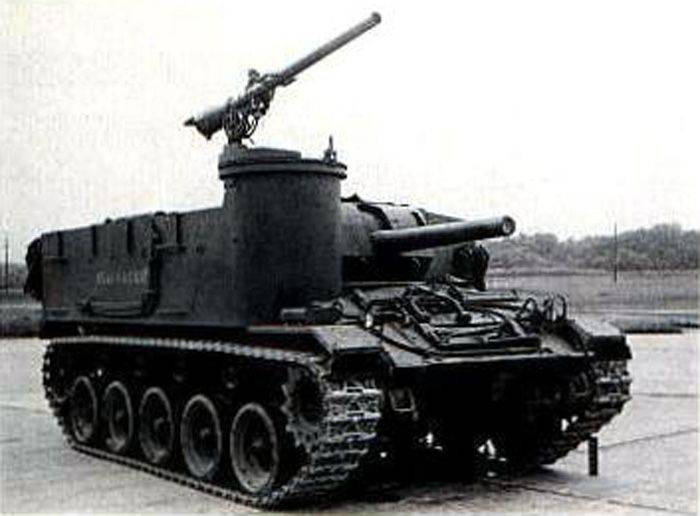 Within a few months, some design work was carried out, as well as prototyping and testing machines. The basis for the experimental machines were taken serial ACS M37, relatively recently descended from the conveyor. In the course of these works, two cars were refitted (according to other sources, the same self-propelled gun received both times new weapons). The project involved dismantling the existing machine gun and installing a recoilless gun in its place.

It is known about the testing of two auxiliary weapons systems. 75-mm recoilless gun T21 and 107-mm recoilless mortar M4 were mounted on the turret of the ACS. The assistant mechanic was to use this weapon together with other crew members. Ammunition was located in the fighting compartment. 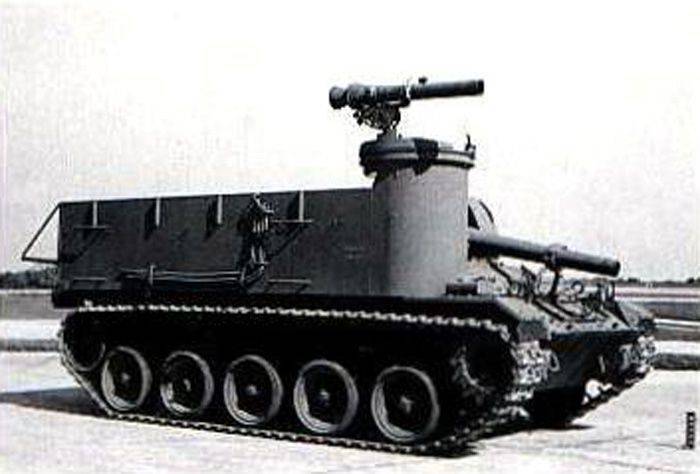 Details of the tests of such modified self-propelled guns are unknown, however, in the available sources there are characteristic disadvantages of the project. The top-open design of the M37 base-mounted ACS has seriously hampered the use of recoilless weapons, when fired, emitting flames and reactive gases. In order to avoid injuries to the crew and damage to the units of the machine, up to the saddest consequences, it was possible to fire from recoilless additional armament only in certain sectors. At the same time, safe firing sectors were not located in the most convenient way for effective fire.

The use of recoilless guns as a substitute for a machine gun made special demands on the design of the base machine. For this reason, the modifications of the M37 self-propelled guns were considered inexpedient and unpromising. However, the work on a promising program is not stopped. Already in the summer of 1945, a new phase began, during which a full-fledged combat vehicle with a new weapon was created. This time it was decided to abandon the idea of ​​retrofitting existing equipment and create a completely new project based on ready-made components.

An analysis of the capabilities showed that the M19 MGMC anti-aircraft gun, based on the M24 Chaffee tank and armed with two 40-mm guns, is the optimal base for a promising self-propelled gun with anti-tank recoilless weapons. This choice, in the first place, was due to a fairly successful layout of the base machine. The chassis of the M19 machine was standard for the American SAU layout at that time. In front of the hull, there was a control compartment and a compartment with transmission mechanisms, an engine was installed in the center, and the stern was released under the fighting compartment with a shoulder strap for the turret. 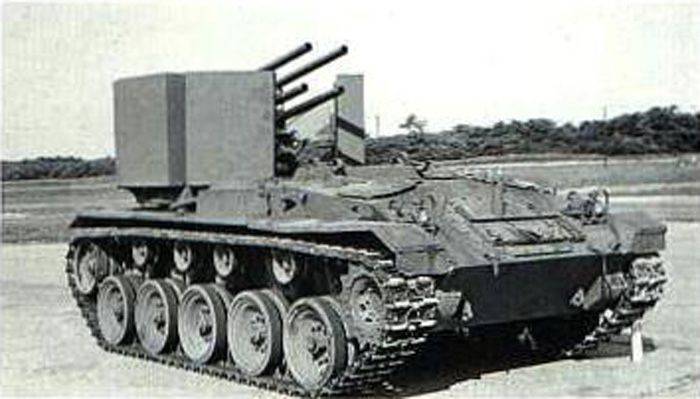 In the basic configuration of the ZSU, the M19 was equipped with a four-seat, pivotal tower open at the top, in which two 40-mm automatic guns were located. The design of the base chassis and turret ensured circular guidance in a horizontal plane. A new experimental project proposed to abandon the existing tower and replace it with a new combat module with recoilless armament. According to reports, the new tower was developed on the basis of some units of the old, but differed in many different elements.

In fact, the only surviving element of the tower was the lower platform, mounted on the hull epaulette. It was installed onboard armored units of curved shape, designed to protect the crew and weapons from bullets and shrapnel. In this case, the right side of the tower had a relatively small width, and its rear part was replaced with a grid on the frame. The port side, in turn, covered the entire side view. On the left side there was a niche for storage of various property. 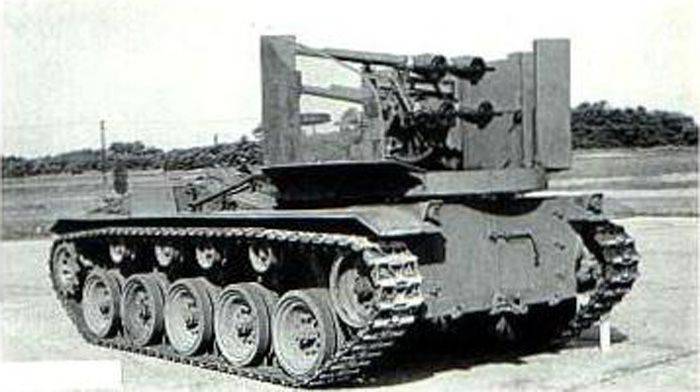 In the central part of the new tower mounted installation for four recoilless guns, made on the basis of the existing system M12. Its design made it possible to direct weapons horizontally by turning the entire tower, and the vertical aiming was to be carried out using appropriate hand-operated mechanisms. The gun mount had a design in which the barrels protruded from the front "window" of the tower, and the breech units had to remain within the combat module, to some extent facilitating reloading.

The assembly of the first prototype of the advanced ACS was carried out by experts from the Aberdeen Proving Ground. The works did not take a lot of time: the car was ready for testing in June 1945 of the year. Soon after, she went to the testing ground.

Initially it was assumed that the new combat vehicle will receive four recoilless guns of the type T19 caliber 105 mm. However, at the time of the construction of the prototype, the specialists did not have the required weapons, which is why the project was slightly modified. On tests SAU came out with a new weapon in the form of four guns T21 caliber 75 mm. Such systems had a smaller caliber and were inferior in their characteristics originally planned, but were available and could be used to assemble the prototype without any delays. 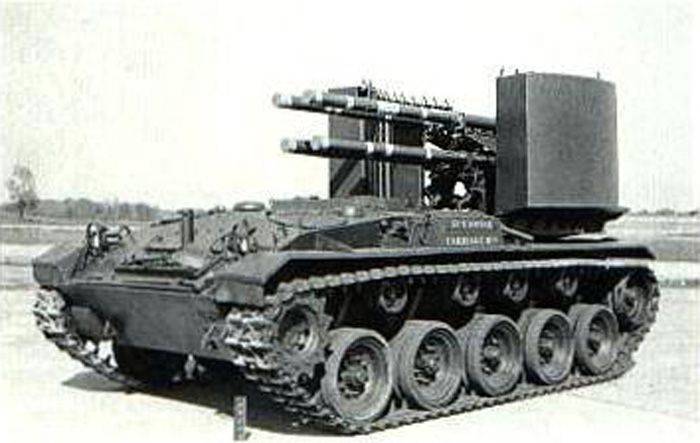 The aim of the project was to check the possibility of installing recoilless guns on existing tracked chassis and assess the characteristics of such equipment. Due to the absence of major changes in the dimensions or weight of the prototype machine in comparison with the base M19, we managed to do without sea trials and immediately proceed to test firing. Similar tests showed the viability of the idea, as well as acceptable characteristics of the proposed machine, even in a “simplified” configuration with 75-mm tools.

According to reports, the T21 75 mm recoilless gun had a barrel length of 5 feet (1524 mm or 20,3 caliber) and weighed 48,6 pounds (22 kg). The system used cumulative ammunition similar to those used by American-made early hand grenade launchers. The warhead of the ammunition allowed to punch up to 63-65 mm of homogeneous armor when fired from a distance of no more than a few hundred meters.

According to its characteristics, the T21 gun was not the best representative of its class, although in the case of the promising project the self-propelled gun perfectly coped with the tasks. The fundamental possibility of installing recoilless systems (including in the form of several tools) on existing and prospective armored chassis was confirmed. According to the test results of the first prototype based on the M19 MGMC, it was decided to continue the work and build an experienced combat vehicle with 105 mm caliber guns. 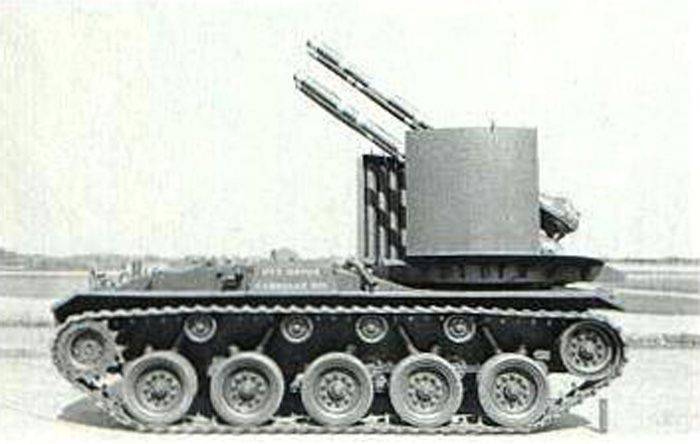 Autumn and winter 1945 of the year went to the creation of an updated project. The overall layout of the perspective ACS remained the same. On the base chassis from the ZSU M19 MGMC, it was proposed to mount a turret with four 105-mm recoilless guns. This time the project was created taking into account the possible start of mass production and deliveries to the troops, which affected a number of design features of the tower. The main innovation was the use of a full booking to ensure the required level of crew protection.

The overall layout of the tower has not changed. In the central part of the platform was located a gun mount, covered on the sides by airborne armored units. The design of the latter has been significantly modified to meet the requirements for the level of protection and ergonomics. On the side, the crew and weapons were protected by box-shaped units made of curved sides, as well as straight frontal parts and roofs. Feed sheets were not provided. Due to certain reasons, the left unit had smaller dimensions than the right unit. Along the sides were places for the crew and attachment for ammunition. The shots were transported in an upright position. 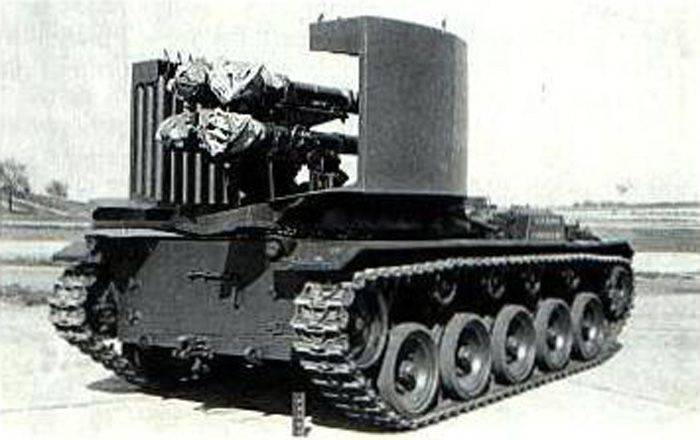 At the central tower installation, four T19 recoilless guns of 105 mm caliber were mounted. It was proposed to charge them alternately, by opening the closures and placing shells from the enclosures into the chambers. Due to the larger caliber T19 guns in terms of fire range and power were significantly superior to the previously used T21.

The assembly of a new self-propelled prototype based on the ZSU M19 with four T19 guns was completed in the spring of the year 1946. In April, the car went to the site and took part in the tests. The details of these tests, unfortunately, are unknown. It can be assumed that according to the characteristics of protection, fire and overall combat effectiveness, the updated SAU should have significantly exceeded the prototype of a simplified configuration. In addition, on the basic parameters, it fully complied with the previously set requirements.

According to reports, no later than the fall of 1946, all work on creating self-propelled guns with recoilless armament based on existing machines of the M24 Chaffee family has ceased. Probably the main reason for this was the lack of noticeable prospects for existing chassis, created during the Second World War. In addition, the fate of these developments could affect their experimental nature. The assembly of prototypes made it possible to try out new ideas in practice, without complicating the work by building completely new combat vehicles. After the tests, respectively, the need for such a technique disappeared. 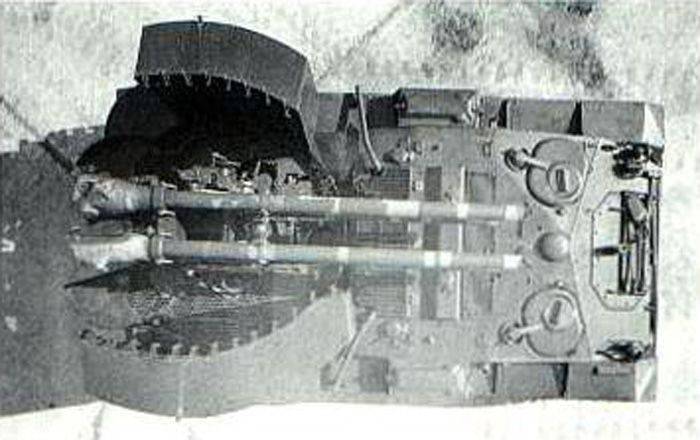 Subsequently, the US defense industry continued the development of recoilless guns and vehicles for them. So, 105-mm gun T19 passed the whole complex of tests, after which it was put into service under the designation M27. Such weapons were installed on various platforms, primarily all-terrain vehicles, and even used during the fighting in Korea. The most interesting representative of the class of ACS with recoilless weapons was the combat vehicle M50 Ontos, created in the early fifties. A base tower with six 106-mm recoilless guns was installed on the base armored chassis of this vehicle.

American projects of self-propelled artillery systems with recoilless guns, created in the second half of the forties, did not reach the stage of mass production of finished equipment. Moreover, all known projects in this field did not even have their own designations. Nevertheless, they allowed to study an important topic and work out the main issues of creating such a technique. In the future, developments in nameless projects were used to create new military equipment, including those that reached the troops.