Vote on time or lose again 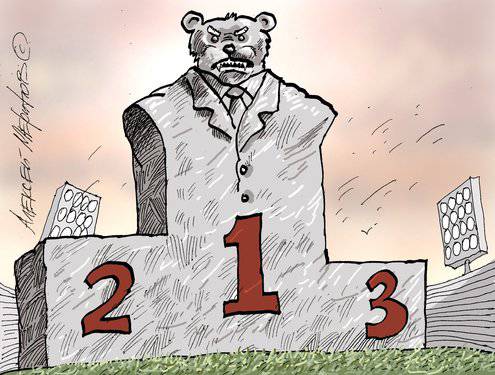 As you know, in less than a week we all have to commit an act of civil obedience, namely, to choose a wise and far-sighted legislative authority again.

This would not be worth reminding once again, especially on the alternative website. stories, if it were not for one nuance, which I consider to be a duty to convey to the public.

Recently some kind of appeal has been spreading on the Internet, excerpts from which I cite:

Everyone talks about low voter turnout. Many say: "I do not vote, not for anyone," "I do not vote, nothing depends on me." Anyone ask - all against edra, but no one believes that his voice decides something. Funny, right? The party of crooks and thieves uses it very well, did not come to the polls - voted for United Russia. I was an observer at the last election and watched the mechanism of “people's will” in all its glory. But we can influence the outcome of events ...

... Need to vote in the evening! From 19 to 20 hours! It is very likely that when you come to the polling station, you will be unpleasantly surprised: Have I already voted? So it happens ...

... 1. Voting from 19 to 20 hours (REMEMBER, VOTING AT TERMINATION IN 20.00).
2. If you received a call asking why not come to vote? - answer (any option):
• fundamentally do not go
• nothing dedends on me
• no one
• there is no column "against all"
• send away
• other ...
And we go to the polling station to vote from 19 to 20 hours!
3. If you got a call, but you cannot visit the polling station, tell me that you will definitely come, but in the evening, later. Your voice will not be stolen!
4. If you find that someone has voted for you, we invite observers. We make a statement to the prosecutor's office about the violation. Let the thieves and rogue will be hard.
5. Today is the day off, rest. YOU HAVE PERFORMED YOUR CIVIL DEBT!

According to my information, a large number of young people, who had previously ignored elections, are going to do just that.

It looks beautiful and logical, but this is a setup!

As you know, the voting procedure itself consists of the following stages:

- the voter draws the passport;
- A member of the commission takes a passport, looks for the last name in the list, checks the data, enters the passport number, transfers the list to the voter;
- the voter signs, receives the bulletin, departs from the table.

How long does this simple procedure take? From 30 seconds to a minute, depending on the quickness of a particular person. And by the end of the day, when everyone was tired, even more. Consequently, in an hour a member of the commission is able to pass no more 100 people through himself. And if not even hurry?

According to rough estimates, in my polling station on the 1 a member of the commission who works directly with the lists has at least 400 - 500 potential voters. Taking into account the fact that half actually goes to the polls, it’s not difficult to handle 12 people for 200 hours. Therefore, the numerical composition of the commission will clearly be the minimum that the corresponding federal law establishes.

EP electorate is estimated at 20%. Consequently, if a 300-400 person comes at the last hour to vote for anyone, but not for the party of power, only a third of them will have time to do it. Where are the voices of those who physically did not have time to vote or, seeing the queue, spat and left, I think it is not necessary to explain.

Thus, there is reason to consider the mentioned opposition appeal as a cunning, well-thought provocation by the ruling party, designed to gather all the protest contingent in a heap and elegantly cut off from the ballot box.

20.00. The voting time is over. Go home. What are the claims, gentlemen? That is the law. It was necessary to come on time.

But we are smarter.
It is necessary and in fact to answer a possible phone call that you are not going to go to the polls. But you need to come not to 19.00, but to 17.00.

firstly, everyone will have time to vote
Secondly, commission members will not physically have time for falsification,
third, they will be careful not to throw in the documents, because now they will not be sure that the refusers will really ignore the elections.

That is, thanks to simple steps, the election fraud operation in this part will be disrupted.

Of course, there is a fallback - fake protocol. But it is more difficult because of the presence of observers, who this time may be incorruptible. I assume that the priority of the considered variant is higher.

If we can break the fraud at least in one stage, let's do it.

The authorities call us to the polls? No problem. We'll come.