Discipline in the army - the basis of the basics or ... in the archives - the power!

December 29 2015
83
There is a widespread opinion that this repression of the 1937 of the year weakened the army, experienced officers did not become (Volkogonov DA Triumph and tragedy / Political portrait of IV Stalin. In the 2's books. M .: APN Press, 1989 , Kn.1 C.1. C.11-12), but discipline has always been in our army at the height. But is it really?


To begin, let's go to 1936, when all repressed commanders and marshals were still at their posts and get acquainted with the state of affairs based on materials from the archives of the Ministry of Defense of Russia and a number of other interesting archives. 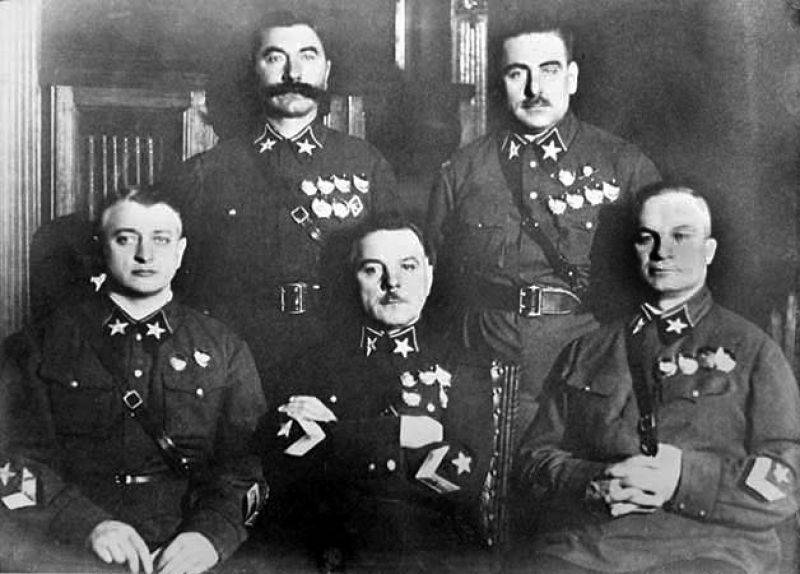 So, judging by the comments made by the commander of the Red Army's combat training department, commander 2 of rank A. Sedyakin, many units that participated in the 1936 maneuvers of the year showed an extremely low level of training of the participating troops. The infantry went to the attack not with rare chains, but with “crowds from the branches”. The soldiers instinctively clung to each other, which meant they were poorly trained. Not practicing bedding, rushing, samokapyvanie, throwing grenades.

The disgusting training of troops was recognized by S. Budyonny himself, who declared that “a company is no good, a platoon is not suitable, a detachment is no good”, “linking the interaction of types of troops ... is lame ... intelligence organization is lame ... soldiers know little duty in battle” - you read in documents of that time .

Komkor S. Bogomyagkov noted in 1935 year that “tactically competent commanders are 99 percent people with good overall development and broad outlook. Exceptions are rare. " But how many then had such an outlook?

The school could not teach them much. And if so, then private soldiers - they were also unable to teach in a good way. Inspection documents paint a monotonously dismal picture of the inept form of training for the rank and file. Classes are constantly frustrated because of their stupid organization. A lot of Red Army men were distracted by various household work. In a number of parts the rifle device was studied without ... the rifle itself, and the telephone was studied without a telephone. Orders for parts of the same Uborevich or Yakir are full of examples of simplifying the rules of firing at the exercises, and all this because otherwise they would simply not hit the target.

And, of course, the army, first of all, begins with discipline, the appearance of the soldiers and commanders, the respect that they can instill with all their appearance, military bearing, knowledge. The divisional commander K. Podlas in October 1936 wrote about this: “The younger ones keep their elders familiarly, loosely, put their feet away…. Sitting take orders, wrangle ... A lot of ragged uniforms, dirty, unshaven, etc. ". Every now and then the documents of the inspectors report that the cadets' uniform was not erased all summer, that they didn’t know what to do when the senior commander appeared, and those were the people who were ordered to train soldiers in the future. It was not so in the Russian tsarist army. One of the old tsarist officers recalled that when the senior officer gave the command to the junkers to form themselves, they should not look at their faces, but only at the tips of the bayonets. Just try to move - you can see everything.

The junior commanders of the Red Army, issued from similar Soviet schools, also looked unattractive. Uncontrolled, often unshaven and in torn tunics, in principle they could not be demanding. It was quite possible to obscure, dignify as a “balda”. A platoon commander or foreman could be criticized by a Komsomol fighter at a Komsomol meeting. What military discipline could there be? And what to do if that was the very atmosphere of the then “proletarian state”. The soldier was seen not so much as a soldier, as a “comrade of such and such ...” (Andrey Smirnov. Great maneuvers // Motherland. 2000, No. 4. С.86-93)

Even a superficial acquaintance with the materials of our military archives shows that the roots of the 1941 disaster of the year go not at all at 1937, but at ... 1917! Moreover, this statement is easily provable. For example, there is data on the state of military discipline just before the war. In a number of the Red Army, emergencies became rampant:

If in the fourth quarter of 1940 there were 3669 incidents, then in the first quarter of 1941 of the year already 4649, that is, there was an increase of 26,6%. As a result of an emergency in the army, 10 048 people were out of action, with 2921 killed and injured 7127 people. In the first quarter of 1941, 3244 people were out of order, of which 945 were killed and 2290 people were injured. The average number of killed and wounded was at the level of 27 – 28 people per day, and in Q1 1941 of the year already 36 people (TsAMO is the Central Archive of the Ministry of Defense, 32, op. 11309, d. 26, l. 245 — 246. ). It is clear that this indicates an increase in the intensity of combat training. But what conclusion was made on the basis of these data and inspections by the Commission on the transfer of affairs of the USSR People's Commissariat of Defense by Marshal of the Soviet Union K. Ye. Voroshilov to Marshal of the Soviet Union S. K. Timoshenko: “military discipline is not at the proper level and does not ensure the exact implementation of its combat missions "(ibid. d.15.l.8.)

Already during the war, in order to strengthen military discipline for officers, seminars, meetings, lectures, reports and discussions were organized on the following topics: “On single-commandment in the Red Army”, “Commander-educator and leader of his subordinates”, etc. For example, in parts 1st Guards tank A lecture was given to the army for officers: “On the role of an officer in strengthening military discipline”, two-day gatherings of tank commanders, tank company commanders and battalions were held, where issues of the practice of training discipline in soldiers were considered (TsAMO, f. 299, op. 3063, d. 31, l. 19.). In the 41st Guards. at the 16th Army at a meeting of the command and political composition, the question “On the introduction of unity of command and the immediate tasks to strengthen discipline” was discussed (TsAMO, f. 208, op. 5415, d. 4, p. 85). Of course, it’s very cool that it would be so if it were not for one “but”: all this happened in the army, where discipline is the basis of the foundations!

Note that the period from 1934 to 1939 years the salary of the commanders of the Red Army has increased dramatically. For example, K. Ye. Voroshilov at the 18 Congress of the CPSU (b) reported that the commanders' monthly earnings — from platoon to corps — increased approximately 2,5-3,5 times. But the greatest "concern" was shown about the top-level commanders. And most importantly - the salary has grown, but problems with discipline remain!

And another thing is significant: almost simultaneously with the salary increase for the red commanders, the cases of their divorces with their proletarian wives became noticeably more frequent. And here there was not only their desire to marry younger and more beautiful, but also, preferably, the former representatives of the nobility. That is, people tried to at least so join the "high and pure." But what was to be done by those for whom even the special designation “non-commissioned officers clique” exists? Before 1937, they had little chance of reaching noticeable heights in the same army, but mass purges had cleared their way up. It is obvious that these very people, who were rapidly rising over the corpses, could not be the moral ideal of the “new society”. But after all they were making their way up ...

So the study of archival materials is not only a tool for learning the truth in relation to our stories, as well as the role of the same discipline during the Great Patriotic War, but also an important means of repelling modern slanderers of Russia!