December 30 2015
13
That trip to the village of Volovo (this is on the border of the Lipetsk and Tula regions) I will remember, probably, for the rest of my life. It was in early spring, when the snow had not yet melted and it was getting dark quite early. Our car just before the way home broke, it was decided to leave it in the village at least for the night. And now I had to somehow get to the station, the last bus. There was enough time, but there was no free transport. And then suddenly, as if grandfather Ignat appeared from nowhere with his cart and horse. He took me to the station, and on the way, having learned that I was a journalist, told me about my childhood. I would, in a mess, immediately take the bull by the horns, write everything down, find out at least his last name and take a picture. But at that time I was so upset about the car that I didn’t do anything. And only after returning home, she wrote down the story of grandfather Ignat in detail.


I must say, this man was immediately conspicuous by his originality. He did not like transport at all - he called all the machines “clerical” and believed that they did not have faith.

I, not without difficulty and fear, climbed onto the cart. The “office” car seemed to me to be more reliable, and even three times faster. Grandfather Ignat threw his sheepskin coat, smelling thickly of sheepskin, onto my lap. And he shook his feet in the old galoshes and got angry at the horse: “Come, soul with a tail! ..”
Ignat told me about his childhood, and it was a bit strange to hear the most confidential, trusted person to a low rank fellow traveler. The grandfather spoke leisurely, and therefore all this evening, too, suddenly seemed unhurried and calm, smelled like an old sheepskin coat.

The war came to Rusanovka (this is the Dolgorukovsky district of the Lipetsk region), stalking Ignatkin’s hopes and mercilessly chopping them to the very root.
In September, Ignatka was going to go to school, to the teacher, Sim Simych, their neighbor. But Sim Simich went to the front, leaving his wife and three children at home. Together with him, Pyotr Mikhalych, a teacher of mathematics and other exact sciences, was also conducted by the older children. 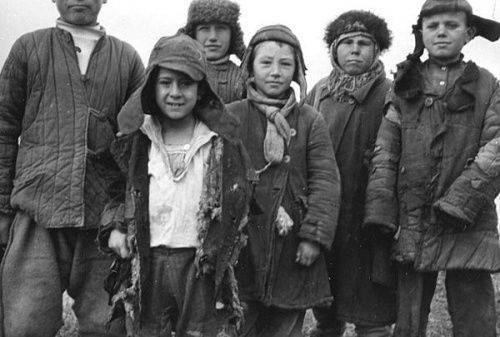 Ignatka rushed about, endlessly looking into the old briefcase, left as a legacy by his elder brother Ivan. And, having guessed that he still could not see his first-grader's degree, he was angry not seriously. I stole a big knife from my mother and decided in the morning to hurry to help ours in order to quickly smash the fascists. The mother found the knife and poured it on Ignat so that she would not think to run out of the house.

Then Ignatka was depressed. His first-year-old friend, red-haired, thin Petka also became sad. It turned out that the lessons they have now are the same as that of preschool children - to help with the housework and fishing. And the honor of first-graders was postponed for an incomprehensible term. Petka, who was called a spindle for thinness and small stature in the village, was still somehow fastened. But Ignatke was completely unruly. He was not tall, sturdy with decent fists, he brought two full buckets from the well and, without even breathing, could bring more and more. Is he about to turn eight years old - and stay in preschool?
Petka, without further ado, offered to take revenge on the Fritz in a partisan manner. How - he did not know yet, and announced that he would think.

Ignatke was not thinking too much - his elder brother Ivan went to war.

Ignatka's father died shortly before the war. He was a lumberjack and once did not calculate - a fallen tree crushed him to death. Mother stayed with Ivan and Ignatka.

Vanya was the first teacher of Ignatka, for that time - a puffy kid, who was teased by everyone for his burr. In no way could he chew his “porridge” in Ignatk's mouth, and therefore all sorts of clumsy oddities flew out of his mouth. Ignatka burned with vengeful hatred to the three letters which he did not resist: "b", "s" and "sh."
So Ivan thought out for his brother various incomprehensible words with these letters. Ignatka tried to speak them, chewed his porridge, got angry and laughed. It was especially difficult for him to get a “red mullet” - as Vanya called it “crane” at the well.

And do what you want until you tell this very little red mullet. Vanya was a strict teacher.

And now he went to the front. Ignatka had already spoken well by that time, but he could not say that he loved his brother. He did not know how to say such words, did not know them, and, if he had known, he would have considered weakness for a girl. And, escorting Ivan out of the house, he only buried himself for a moment in the brother’s hands smelling of smoke and hay.
Ignatka stayed with his faithful friend, red Petka. Together they thought about how to defeat the fascists, pretending this way and that, waiting for the right occasion. Once it seemed to them that luck was at hand - in the village they began to talk about the fact that two of their girls had gathered for the war - the brisk black-eyed Anuta and the quiet, light-colored Zina. The guys decided to join them - maybe together they would get to the front. But the girls refused outright.

And Annie pulled Ignatka a hat on her forehead to the very eyes and said that while the hat is large, they will not take him to war in any way. And the hat was paternal - will it ever fit again?

Soon a funeral came to Pansy. And then to Zina's mother.

Cold in Rusanovka came strong. At night, the water brought by Ignatka from the well froze in the bucket. Ice Ignatka beat with a stick, imagining that he was cracking down on Fritz.

Petka went to the river to fish. But he always returned home empty-handed. And once he fell asleep near the hole and almost fell into the cold water. Saved by the fact that his mother came there to rinse clothes and saw her son.

Petka no longer went to the hole, and Ignatka did not show up after this incident for more than a week. And then, unexpectedly, he had already appeared in the evening, disheveled, mysterious, and dragged Ignat over the village, into the forest.

- What are you, stunned? - Ignatka pounced on him. - Now the mother will come home from work, but my buckets are empty. Last time she saw that I was not there, she poured in — I could not sit down! Even standing soup slurped.

- Shut up! - hissed Petka. - I found Fritz. He lodged under a bush. I think in the darkness through the village decided to break through, you bastard!

Ignatka felt cold in his heels and seemed to scrape a rusty nail. He rushed back, but stopped. What to do with the Fritz? Well, he really will kill them? Or take to Germany? Her mother told me that the Germans were taking their children there by truck. And who tries to escape-shot or hunted by dogs.

And Petka was not scared. He was breathing loudly over the most Ignatkin ear and kept whispering that Fritz would leave if he couldn’t catch him now. Ignatka went after Petka, but the nasty nail was still scrubbing and scrubbing the soul.

Soon the children turned off the road and, getting stuck to the waist in the snow, like flies in semolina, began to make their way to the forest. Hard, as if straw, Ignatka's hair became wet and stuck to his forehead.

Snow piled into sleeves, felt boots, by the collar. He melted, feeling the warmth of his body, mixing with sweat. And Ignatka did not know whether it is fear that cools the soul, or melted snow.

- Here he is! - suddenly exhaled Petka and thumped on his knees, pulling Ignatka behind him.

In the lilac twilight, Ignatka saw a black motionless body under a bush. The soldier was lying somehow absurdly, sideways, putting forward his left hand, which for some reason was shorter than necessary. A cap with earflaps, tied under the chin, slipped on the face. But the recumbent Fritz did not even try to fix it. He did not move at all.

- died? - again breathed over the ear Petka, rising to his feet.

But the soldier suddenly moved a terrible short hand. Scratched it with snow, like a shovel - the hand did not bend, as if carved out of wood.

The soldier still scratched the snow, raised his head. In the twilight of his face was not to see.

Ignatka stood for a while and suddenly began to make his way to him.

- Where are you going? - shouted Petka. - Pretending to be a bastard!

But Ignatka already realized that the soldier was wounded. Maybe Fritz, but wounded. It turns out that there is nothing to be afraid of him - weakened, what will he do to them?
Ignatka approached the Fritz and stopped. What to do with it? And if he has a crook in his bosom? Like a palat now ...

And again scratched the snow with your hand. Ignatke again became scared. Knows the name - and from where? After all, Ignatka is not familiar with this strange man. But what is Fritz really pretending to be? But why speaks so well in Russian?

Just in case, he walked away and barked a voice hoarse from fear and fatigue:

- As it is, arrested, - summed up from behind Petka. - How is it ... handyhoh, here. - And he straightened up, proud of how successfully he screwed up the foreign word.
The soldier tried to move, but only weakly covered the snow with his feet. The cap fell from his head - she was wrapped in a rag. Like a cocoon from a butterfly.

... Carrying out the task of the partisans, Ivan, Ignatkin's brother, blew up a bridge over the river, essentially connecting two villages. But he did not have time to leave. He was caught by an explosion, tearing off his hand. Burnt, contused, he determined the direction and crawled home, losing track of time. Ivan did not know how long he crawled - day, week. Sometimes it seemed to him that, just like that, he was moving for a whole year already. Then Ivan recalled that the snow had not yet melted and there were no visible flowers on the ground. And therefore, time just seems so long, stretched and smeared, like jelly on a plate. And he crawled again, dreaming of getting to his own. After all, not so far away, since the place of his relatives, even if delirious, he finds out!

Ignatka's mothers at that time sent a paper stating that Ivan was missing. Ignatka she did not say anything, she harbored misfortune, with her motherly heart having guessed that her son was alive. And I was not mistaken.

Recovering, Ivan again went to war. Only now he was always holding a rifle in his left hand.

And the Germans soon occupied Rusanovka. But about this page of Ignatkin childhood - another time.