Russia, as a country with the largest reserves of fissile materials and nuclear warheads in the world, attaches great importance to increasing their level of physical security (nuclear security) through the continuous improvement of accounting, control and physical protection systems (UKFZ).

Such efforts are aimed at ensuring the safety of nuclear materials at special facilities, and constitute the first line of defense against their illicit trafficking, fraught with terrorism. At the same time, the concept of a second line of defense was introduced as an additional element of a multi-level security strategy in order to strengthen the potential of Russian customs services in detecting and curbing the illicit trafficking of nuclear materials in the event of their leakage from controlled sites. In addition, measures were taken to reduce the excess amount of weapons-grade nuclear materials by converting them into forms suitable for peaceful use.

Over the past two decades, a great deal of work has been done in the country to improve the quality of the physical security of nuclear materials and the results achieved are evidence of this.

At present, there are no nuclear materials or facilities in Russia that could be of concern: all storage facilities and vehicles are protected at least at the level of IAEA recommendations. Competent supervisory authorities constantly check the effectiveness of UKFZ systems, and the relevant legislative base is regularly updated. In particular, in 2012, the federal regulatory document “Basic rules for accounting and control of nuclear materials” was approved.

It should be noted that the successful implementation of most of the above measures was facilitated by the large-scale cooperation with the United States on the Joint Threat Reduction program (also known as Nunn-Lugar) launched in 1993. It was of particular importance in the 90-e, which are difficult for us, but as the situation stabilized, the Russian contribution became more and more tangible and it was already fixed in the RF budget for 2015 that all such activities would henceforth be at public expense. 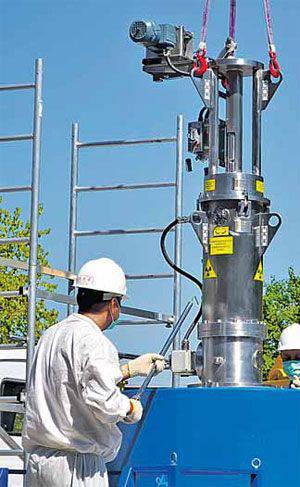 It is appropriate to note that the decision of the United States to invest several hundred million dollars in strengthening the Russian infrastructure of nuclear security was hardly motivated by considerations of charity, most likely was a purely pragmatic, preventive action - eliminating the consequences of a possible leakage of nuclear material (not to mention the potential loss of a nuclear warhead) It would have cost the American taxpayer much more. It is also worth noting that bilateral cooperation was also beneficial for the Russian side, as it allowed to increase the pace of modernization of UKFZ’s domestic systems.

Russia is a party to all international agreements in the field of nuclear safety, including the Convention on the Physical Protection of Nuclear Material and its amendment to the 2005 of the Year, as well as the Global Initiative to Combat Nuclear Terrorism. In September, the 2012 th in the Moscow region were held exercises "Guardian-2012" to combat nuclear terrorism, which was attended by experts from around 50 countries.

The Russian Federation supports the activities of the IAEA in the field of nuclear safety and makes voluntary contributions to the agency’s eponymous fund since 2010. Great importance is attached to cooperation in this field with third countries seeking to master nuclear energy. In practical terms, this means, in particular, the organization for students from these countries of appropriate long-term courses in Obninsk and Tomsk. Russian experts are actively participating in the development and improvement of IAEA advisory documents on nuclear safety and in conducting related seminars.

Keep by the rules

Based on a map prepared by American experts from the Livermore Laboratory based on years of experience working with Russian experts from four national nuclear laboratories (including Los Alamos, Oak Ridge and Sandia), one can assess the scale of bilateral cooperation in nuclear security - in aggregate for 20 years in the Russian Federation have been upgraded around 90 nuclear sites.

In accordance with the executive agreement between the Russian Ministry of Defense and the United States Department of Energy signed in 2001, UKFZ systems were upgraded at the Navy facilities in the Far East and the Kola Peninsula (11 storage facilities for new nuclear fuel and 39 storage facilities for YABZ) GU MO, responsible for the storage and operation of a nuclear arsenal (25 sites). In addition, two technical training centers have been established to service these facilities.

In accordance with the bilateral agreement between the Ministry of Atomic Energy of the Russian Federation and the US Department of Energy signed in 1999, the nuclear security systems containing highly enriched uranium or plutonium buildings in the Kurchatov National Research Center, Mayak Production Association, were upgraded in Sarov and Snezhinsk.

All of these facilities are equipped with modern accounting and control systems, electronic seals and warning devices for attempts of unauthorized access to nuclear materials, car monitoring devices and alarm systems.

The Russian-American project “Second Line of Defense” received official status in 1998 after signing the relevant protocol between the State Customs Committee of the Russian Federation and the US Department of Energy. In subsequent consultations, it was agreed that the United States will provide financial assistance in equipping our border checkpoints with radiation monitoring equipment, which will be produced in the Russian Federation in accordance with the standards of both parties. It is important to note that by this time, successful joint tests of the Yantar stationary system for the detection of nuclear materials had already been carried out at the Los Alamos laboratory (developed and produced in the Moscow-based Dubna research and development center).

Thanks to the joint efforts, with an equal share of the financial burden between the partners in the project “Second Line of Protection”, the 200 of the Russian border checkpoints were equipped with radiation monitoring equipment. At the same time, the total number of used Yantar systems of various modifications exceeded six thousand. It should be emphasized that since the start of operation of the system, the number of annually recorded cases of illicit trafficking in nuclear and radioactive materials has increased by a factor of a hundred.

Monitoring tools similar to those used on Russian borders are actively being established in other countries, in particular in the post-Soviet states (Armenia, Kazakhstan, Uzbekistan, Ukraine). After successful testing of the Yantar system at the IAEA in 1997 – 2000, it began to be applied in the member countries of the agency.

According to the bilateral agreement signed in 1993 on the disposal of weapons highly enriched uranium (HEU) Russia has pledged to dilute 500 for twenty years with tons of this material (sufficient to manufacture 20 thousands of nuclear warheads) to the quality of low-enriched uranium (LEU). The parties agreed that the resulting LEU will be used as nuclear fuel by American nuclear power plants, from which the informal name of the Megatons to Megawatts transaction originated.

The agreement helped to increase the level of physical safety of Russian nuclear material through a significant reduction in HEU stocks. At the same time, it was beneficial to both parties financially. For twenty years, 10 percent of the total US electricity produced has been generated by Russian uranium. Foreign exchange earnings from the transaction amounted to 17 billions of dollars for Russia, which were used among other things to finance programs to improve the safety of Russian nuclear power plants, rehabilitate radiation-contaminated areas, and convert “atomic cities”.

In 2002, the Russian Federation, the United States and the IAEA launched a program to return to Russia from abroad, representing the potential threat of the uncontrolled spread of highly enriched uranium fuel from research reactors of Soviet design.

During a tripartite consultation in Vienna, more than 20 of such facilities were identified in 17 countries. The goal of the program was to provide financial, technical and organizational assistance to Russia in the repatriation of fresh and spent uranium fuel and the development of new ones for conversion of reactors to LEU.

Today, all HEU-based nuclear fuel has been exported from nine countries, partly out of five. Since the launch of the program, about 800 kilograms of fresh and about 1300 kilograms of irradiated uranium fuel have been returned to Russia. This material is placed on temporary storage in special warehouses in anticipation of processing. A preliminary assessment of the possibility of converting fuel from six Russian research reactors to LEU was confirmed. Currently, experts' efforts are focused on the development of high-density LEU - fuel for research reactors in the Kurchatov Center and Tomsk University.

Matthew Bann, a reputable international expert from Harvard University, states: “Over the past two decades, Russia has dramatically improved the quality of nuclear security. Figuratively speaking, the difference between today's and yesterday's level of its UKFZ systems is like the difference between day and night. ”

At the same time, such high marks do not mean that important work has been completed on the whole. Russian expert circles have a clear understanding of what remains to be done. In particular, special attention should be paid to maintaining the operational readiness (sustainability) of the recently upgraded UKFZ systems for the foreseeable future.

Ctrl Enter
Noticed oshЫbku Highlight text and press. Ctrl + Enter
We are
Plutonium CasesMilitary reform as an integral part of the security concept of the Russian Federation: Systematic dynamic assessment
109 comments
Information
Dear reader, to leave comments on the publication, you must to register.