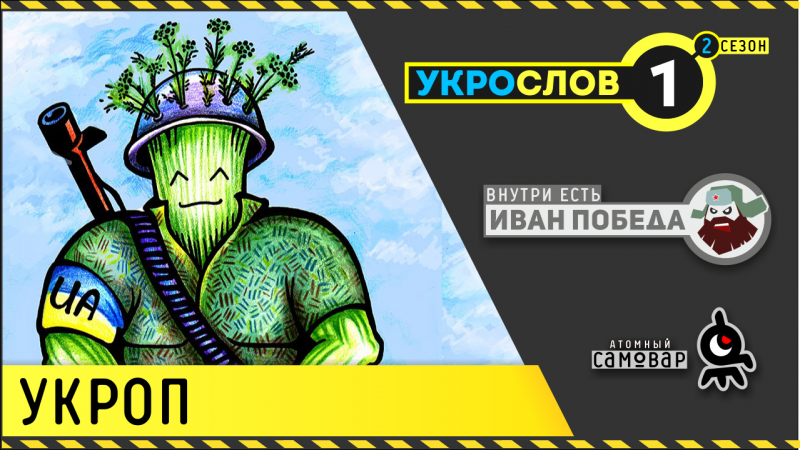 I continue my hard and strictly scientific work on finding the true Svidomo. And today on the operating table is the ancient and sacred symbol of the Ecumenical National Krai - UKROP.

I recommend immediately squander the article down and watch the video. Since the video is important.

Hello to all ours and not to ours! I am Ivan Victory and this is Ukroslov!

And today we will talk about "Dill" - a newfound symbol of Ukrainian power, strength and devoted love for Nenko. Dill or scientifically Dill garden, an annual herb of the umbrella family. But all the cunning of the situation is that in Moscow’s move he is “fennel”. And in Ukrainian - "creep"!

Ukrainian Scientific Academy Historical Fantazy released a report explaining the underestimation of dill in the patriotic education of young citizens. It follows from the report that the understanding of the importance of the symbolism of dill was lost somewhere in the centuries. And only thanks to the extreme Maidan and the treacherous hybrid aggression of Russia against Ukraine, was it found and rethought again. Well, like, gene memory and all that.
And now the strength, loyalty and wisdom of dill beats in the heart of every Svidomo ukropatriot.

Although the version that the ancient proto-clans used dill as a talisman and drove away the wild ancestors of the Muscovites with it was beautiful and ukrologichna. But, judging by the same pseudo-historical data, it turns out that the Muscovites took away from the ancient ukrov and their self-name “Russians”, the Russian alphabet, the Russian language ... and even the very name Russia. It turns out not helped dill it. It did not help at all!

And now, the real version of the origin of the Ukrainian emo symbol is Dill.
At the very beginning of the Ukrainian terrorist operation in the Donbass, ukroviysko, of course, consisting entirely of lyts, carrying light and salvation, hesitated with hopes for a small and victorious war.
In anticipation of a glorious peremoga, the APU joined the rabble of Nazis, fascists, Bandera and mercenaries. In an organized manner, they were knocked down in gangs and gangs ... they self-called themselves terbats and the National Guard. Each gang came up with a terrible name, emblem, flag and stripes, one more terrible than the other. All this masquerade was supposed to inspire, inflamed by Uniate priests, Selyuk and Roguley on the blitzkrieg. On the rich booty and trophies. Yes, most of this riffraff was eager to rob caravans.

Donbass militia did not begin to understand the varieties of Ukrainian lytsarstva ... and called them all in a crowd - "dill". Terrible and Kheroyskoe ukroviysko-became dill. It's a shame, painful and bitter. Anger and tears strangled Ukrainian lytsar. Began razdra. Heroes began to scatter, like cockroaches, drink, grumble ... and die in whole bunches.

Uniate priests and magicians attached to each gang, seeing such a mess, began to scribble slanders and sneak off to the authorities. As a result, the problem was noticed and they began to be solved intensively.

And the decision was - rebranding! According to Western instructions, the word “dill” had to be made a stylish, fashionable and youth symbol of the heroic, centuries-old struggle with Moskal. And the creative burry brethren immediately took up the task. Brainwashing and dusting specialists. Nosy and curly PR people and advertisers. And they are the most patriotic and committed to the ideas of independence - svidomye ukrosemity. These devils are ready to sell their mother for the freedom and independence of Ukraine.

The party “Dill” was hastily registered, uniting the best Svidomo Ukrainians under the strict guidance of the oligarch Kolomoisky and his sixes Korban, Yarosh and Filatov
To justify the moronic name, they came up with the idea that "dill" is coded by ancient ukrami - an acronym that means "Ukrainian Patriot".
A unique and unique dill logo was developed. Well, then the most important and enjoyable stage! Monetization of patriotic feelings! Internet shops are flooded with T-shirts, stripes, stickers with an ancient Ukrainian symbol - garden dill. Then there were fashion shows, art perfomances, trade shows and comics. And pennies flowed in a ringing stream into the bottomless purge of true ukropatriots.

Finally, TV and the media helped make the bunch of dill a national symbol of the Ukrainians, which the fraternity controls and does not release from its sweaty little hands for many years.

A wave of ukropofiliya ruthlessly covered Ukraine. Volunteers with pleasure, instead of helmets and bulletproof vests, were taken - boxes with stripes and dill chevrons. And instead of canned food and dry rations, it has now become patriotic to issue bunches of dried dill. And only dare to twist the mug, they will immediately write to Muscovites.

Summarize!
Bravo, my applause. The best representatives of the Ukrainian people, the most patriotic of the patriots, the most svidomye of the Svidomo, coped with their task simply flawlessly. And dill, this new symbol of restraint, was planted in the brain of a small Ukrainian ... by the very tomatoes. The next stage of the operation for the debilization of the residents of the Square was successful!

But they still made one small mistake in their ingenious plan. One important point in the ukrocentric universe was missed. Dill magic!
Garden dill is capable, magically, of self-education in boilers. And the inexorable magic of dill has manifested itself fully in the civil war in the Donbass. Ukrainian lytsy with dill strips, successfully and repeatedly self-organized into boilers. Where they died.

According to rumors, the APU even issued a secret circular to counteract self-educating boilers. For this purpose it is recommended to catch all the lytsy who wears the symbolism of dill and beat them mercilessly with batogs.

It is strange that creative PR people didn’t use the self-appealing tear-stab scene. After all, she undoubtedly would have increased the degree of patriotic frenzy by an order of magnitude. Laying bunches of dill to the grave of an unknown dill !!!

Traditional addition.
No seriously? Dill, as a national symbol of valor ???
My little Ukrainian friend, you were raped again. And this time, not Muscovites. And your current false power. Sorrel, rutabaga, or even cabbage would be more heroic symbols than dill.

The entire policy of a decaying Ukraine is built on performances and shows. Senseless, but bright symbols and images, allow us to distract from the people turned into a crazy herd, people. They're trying to make dill out of you, a brainless plant that will jump on the whistle, bark on the whistle and shit on the whistle.

Get away from this crazy herd, remember that you are Russian. Perhaps you will be able to rise above the situation and look at what is happening from the outside. And check out the extent of the infinite madness that is happening now in this territory abandoned by common sense and God.

Everything! See you soon!
About Dill. UkroSlov (2) №1 with Ivan Victory

Ctrl Enter
Noticed oshЫbku Highlight text and press. Ctrl + Enter
We are
What you didn't want to know about EnglandRussian "nationalism" in persons - statements of some famous people of Russia in the XVII-XX centuries
Military Reviewin Yandex News
Military Reviewin Google News
52 comments
Information
Dear reader, to leave comments on the publication, you must to register.