Poroshenko in the Knesset: how to become a "kosher Bandera" and sit on all chairs at once 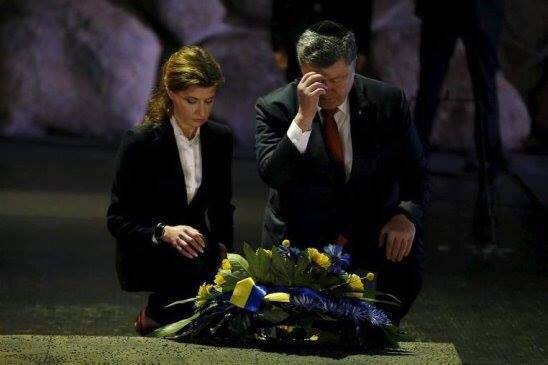 What is worth only one attempt to baptize, wearing a pile. At that moment, all the Jews who saw this miracle thought “Weiz world, what a pots.” However, the Orthodox are also in shock.

However, all this flowers compared with Poroshenko's speech in the Knesset. There Petzünder demonstrated an attempt to sit on all the chairs at once.

That there just was not. And the statements that “the flight Kiev-Tel-Aviv is internal” (hello, Khazar Khaganate). And the stories that Ukrainians and Jews are the two most ancient peoples of the world. And the story of how Ukraine created Israel. And a fable about how the Jews helped create Ukraine. It remains only to find out who in the pair of Adam and Eve was a Ukrainian, and who is a Jew.

Clever Jews sometimes clapped at Poroshenko’s especially enchanting passages, thinking to himself that they had successfully saved this year on tickets to the circus — still no other clown lights up like Poroshenko.

When Poroshenko got into history Ukrainian-Jewish relations, I wanted to somehow stop this madness. I understand that this is in the tradition of the Ukrainian presidents, to carry nonsense. Kuchma once also blurted out about the “century-old traditions of the Polish-Ukrainian friendship” (so “friends” that from time to time they sawed each other out with whole cities). But Poroshenko and surpassed it.

After all, this massacre of Jews in Uman, when they killed the population of the whole city, including women and children, sang the “Ghoul” Shevchenko. Or Poroshenko knows Ukrainian literature so poorly? And it is in the same Uman that the Hasidic Jews regularly, almost every year, are attacked by Ukrainian nationalists-Bandera.

Further Poroshenko strongly condemned the crimes of the Nazi collaborators against the Jewish people in Ukraine during the Second World War. Strange, who is it? Are not those Bandera from the UPA, who are now honored in Ukraine as "heroes"? After all, this Bandera from the division of the wffen-SS "Galicia" staged riots and massacres in Lviv in 1941 year. After all, it was the policemen from among the Ukrainian nationalists who staged a massacre at Babi Yar. So who exactly Poroshenko condemned?

Or is it not Poroshenko flaunted in camouflage with the inscription "Cynical Bandera"? Why did he not put on this wonderful suit in the Knesset? I think that, along with a bale, he would look quite organic, complementing the clown image of Petrushka.

Well, separately, outside the categories, Poroshenko’s statement that “Sharansky fought against Soviet repression and for the freedom of Ukraine.” Historians and archaeologists, of course, are aware of the existence of a certain Nathan Sharansky, but I am not sure that it was him who meant the kosher pig. Lev Natanovich, just in case, should be proud - his handshake yesterday increased significantly.

Ctrl Enter
Noticed oshЫbku Highlight text and press. Ctrl + Enter
We are
What you didn't want to know about EnglandHow can Russia survive and win in the 21st century?
125 comments
Information
Dear reader, to leave comments on the publication, you must to register.