Dear readers "IN"! I dare to present to your judgment my first article. Without having deep knowledge of classification, types, standards, and even more so with the use of this kind of technology, I do not dare to prove which one is faster, stronger and higher. My article will contain a statement of facts collected from media reports, official press releases of companies and statements by various officials related to this topic and the military-industrial complex (hereinafter MIC) of the Republic of Kazakhstan as a whole. As stated above, I am not an expert, and not even a couch warrior. This article will not provide technical details of Paramount Group products. You can find all this in Alex Alexeev’s article “Armored vehicles from the Paramount Group company” from 10 in November 2014 on “BO”.

Plant for the production of armored wheeled vehicles

So from the last News You heard that on November 30, 2015, President of the Republic of Kazakhstan Nursultan Abishevich Nazarbayev visited (according to other sources “opened”) a plant for the production of armored wheeled vehicles sold by a joint venture of Kazakhstan Paramount Engineering LLP, licensed for these activities since November 13, 2015 . The main activity of the plant is the production, maintenance and repair of armored wheeled vehicles, armored personnel carriers: 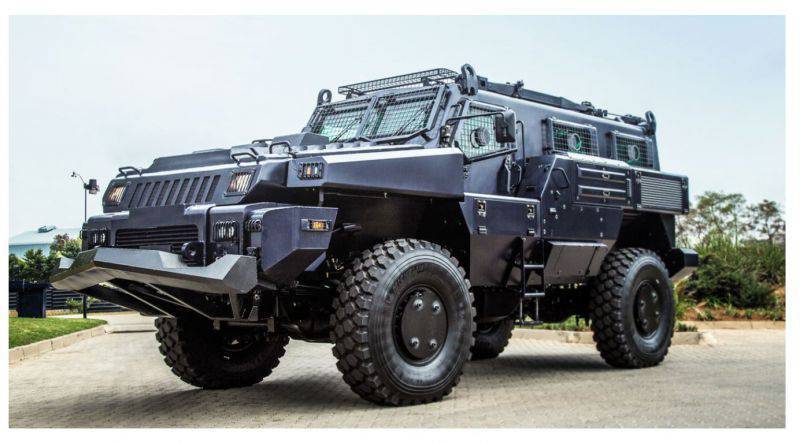 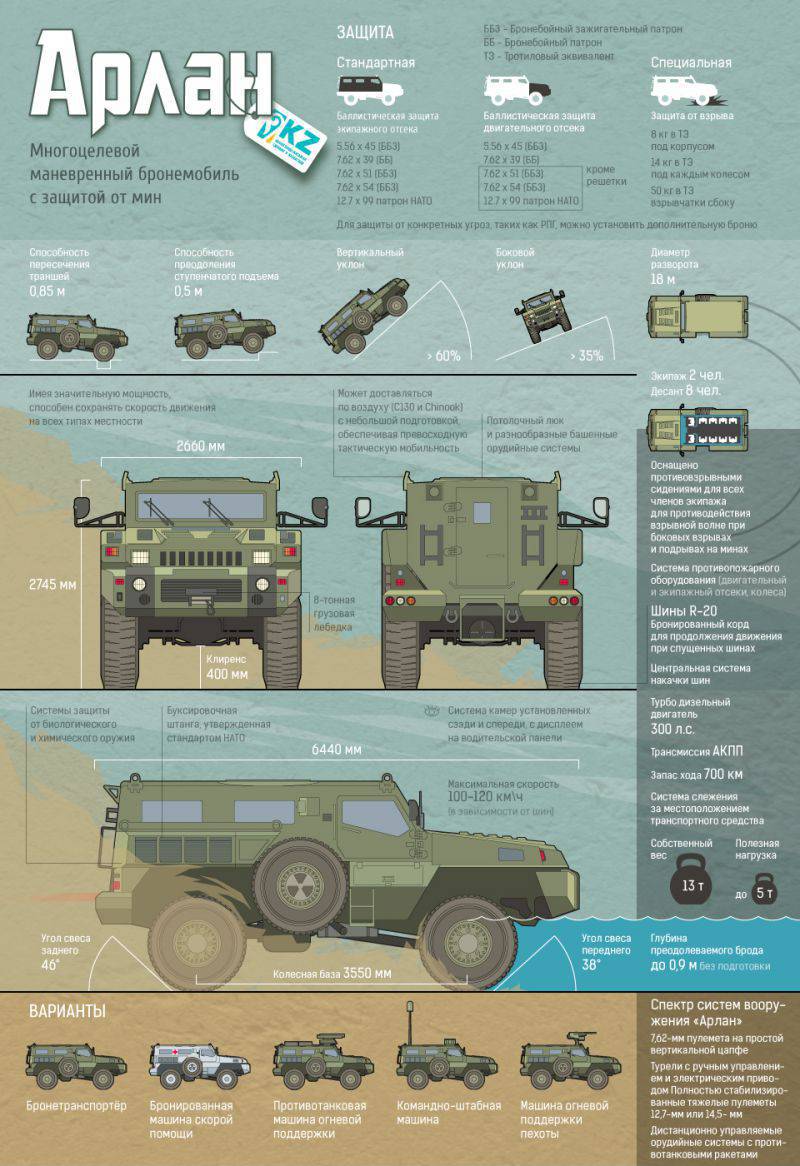 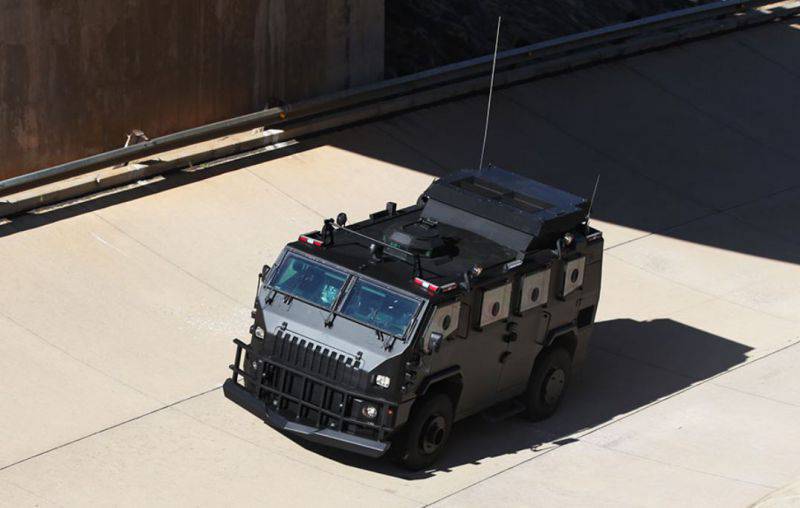 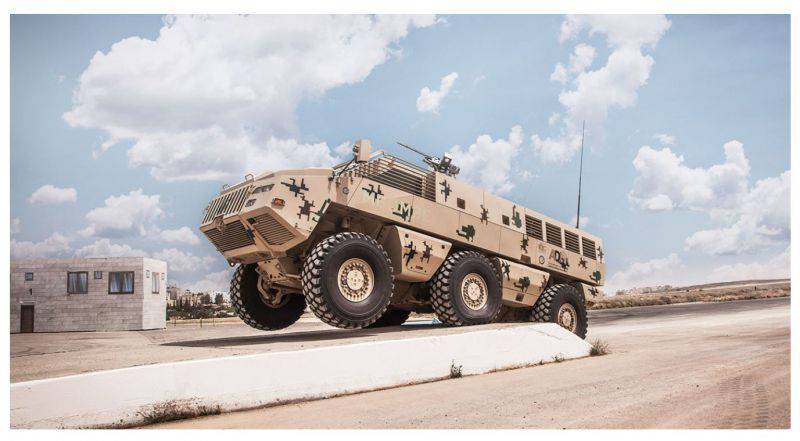 The release of the listed armored vehicles will be possible in modifications. What is not reported. At the same time, Arlan’s hull provides the 3 STANAG protection level, and Barys’s hull provides 3 STANAG-level ballistic protection and 4a and 4b STANAG anti-mine protection.

A promising development direction announced the creation of the modern Barys armored personnel carrier with the wheel formula 8х8. The machine will have a high level of protection and firepower, mobility and high payload. Interestingly, on the official website of Paramaount Group there is no information about armored personnel carriers with the wheel formula 8х8 and, judging by the image that was placed in the shops of the plant at the time of opening, this platform will have a tower with a weapon system by analogy with the BMP-3. Of course, it would not be correct to make assumptions about the caliber and, accordingly, the capabilities of this system, looking at the image of a promising BTR. Let's wait for more details. 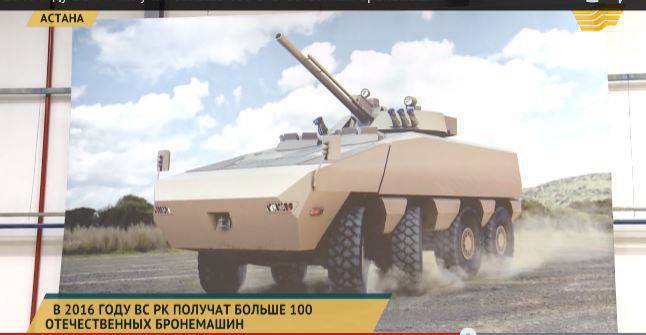 Official factory information: modern high-tech efficient equipment allows you to implement a full cycle of work such as laser cutting of sheet metal, welding armor plates, applying paintwork, assembly work, strict quality control. Technical equipment of the plant involves the solution of a wide range of tasks in the field of production of wheeled vehicles for military and civil purposes. All equipment manufactured at the plant will be manufactured on the basis of international standards, which will allow to sell products both within Kazakhstan and beyond.

According to the Director General of Kazakhstan Paramount Engineering, Yerbol Salimov the company plans to supply 50% of materials for vehicles from the countries of the Customs Union, and work is currently underway on cooperation with KamAZ on the unification of engines, bridges, and various electrical systems. Reached certain agreements.
The volume of investments in the construction of the plant amounted to 7. To 80 mln. Tenge, 150 jobs created, 55 engineers and technical specialists trained in Kazakhstan and abroad. According to the information posted on the e-licensing website of the Republic of Kazakhstan, as of December 2015, Kazakhstan Paramount Engineering attracted only one foreign worker.

If we talk about the markets, then, as mentioned above, the plant has a small share in the country's budget for the needs of the military industrial complex, the plant is focused on the possibility of supplying products abroad and this is confirmed by the signed memorandum with Jordan for the supply of 50 6х6 machines during the next year . The plant management reports that the main equipment supplied for the 2015-2016 year is Arlan 4х4. In general, the production capacity of the plant is 120 machines per year. According to the Tengrinews.kz portal, 50 percent of the plant is owned by foreigners, 50 percent is owned by Kazakhstan Engineering Company.

15 December 2015 of the Year of Defense of the Republic of Kazakhstan presented a video test, after viewing which the following things can be identified: a) sea trials were conducted in the warm period of the year; b) night firing was carried out 25 June 2015 both in a static position and on the move at distances to the target from 500 to 907 meters, while using weapons with a caliber 12,7 mm (most likely a heavy machine gun); c) judging the inscriptions in Turkish on the screen, the optoelectronic component of the combat module is most likely made by Kazakhstan Aselsan Engineering LLP. Why inscriptions in Turkish, and not in Russian or Kazakh language is worth guessing.

Unfortunately, I could not find information about the dates of the signing of the relevant documents with the Paramount Group on the establishment of the joint venture, perhaps the origins of this transaction can be attributed to the KADEX-2012 exhibition, which was held in Astana in 2012, at which NK Kazakhstan Engineering signed various contracts for 1,8 billion dollars.

As a summary of this section, you can highlight the following points:
Choosing a partner. Paramaount group is the largest private aerospace and defense company in Africa (South Africa). That is, this company is private and from South Africa, which can be conditionally taken as the company's independence from political decisions;
Deep integration.If the plant management has plans to supply 50% materials for equipment from other manufacturers, this means that Paramount Group as a partner really makes serious concessions and is ready for deep cooperation, which once again underlines the benefits of choosing a private company as a partner.

Of course, if there was an opportunity to get acquainted with the feasibility studies for choosing a partner, we could know more reliably why Paramount Group.

The strategy of the MIC was developed on the basis of various factors, such as the presence of design bureaus, internal needs, wide possibilities of expert potential, etc. And if we talk about the results of this strategy, the creation in Kazakhstan of modern high-tech industries with the participation of foreign partners can be called "aerobatics" in terms of investment performance.

The picture of the development of the military-industrial complex is complemented by the words of political scientist Marat Shibutov, cited in the article “Are the Kazakh army armed with this or that?” Of the same Central Asia Monitor resource in July at 2015: For our military industrial complex the main goal is to manufacture at least the most common and most used types of ammunition, to carry out partial (non-capital) repair of certain types of military equipment, as well as to release certain types of equipment. For something more substantial, we simply do not have enough strength, even if we could save the entire Soviet potential of our military-industrial complex.

In relation to the procurement strategy: purchased weapons must be sufficiently widespread to change the supplier if necessary; military equipment must have sufficiently common spare parts so that it can be repaired in local conditions; the supplier of weapons and military equipment must be reliable enough to receive timely and high-quality service in the future. Of course, Marat is not a regular soldier and does not work for the MK of the RK and this allows him to be more free than the officials from the MI in his statements.

In principle, theses voiced by Marat are not a secret, and they all follow from:
• the heritage we got after the collapse of the USSR;
• how and what we were able to preserve and not destroy completely;
• The state of the economy and the position of Kazakhstan in the world arena.

Let me add: according to my foreign colleagues (mostly engineering staff from Europe, working in the oil and gas sector), the leadership of our country compared to the leadership of the United Arab Emirates is more reasonable, trying to locate production in Kazakhstan of all that is possible and to increase local content in the output. This is a side view. In this plan of work, we don’t have a clear edge, and if everything were so easy, because corruption blooms with a double color.

As they say, man proposes, and God disposes. And in criminal cases that were started earlier under the Semser self-propelled howitzer and Aibat mortar modernization program, God arranged everything so that Deputy Minister of Defense Lieutenant-General Maermonov Kazhimurat was sentenced to 2013 for 11 years. The case involved other soldiers of the Republic of Kazakhstan and a citizen of Israel. And it all came down to the fact that each of the respondents "signed acts of receiving equipment, knowingly knowing about its malfunction." Read more about this history You can read the article "Aibat self-propelled mortar." International cooperation and corruption scandal "by author Ryabov Kirill on" IN ".

God also arranged the case for the Cobra combat wheeled vehicle, which, according to the commander of the 36 amphibious assault brigade, Major General Dzhumakeev Almaz, was supposed to have been produced in Kazakhstan from 2014 by a joint Kazakh-Turkish venture. But things are there. Whether there is a plant or not is difficult to answer. As if God did not turn everything so that someone else in this case is not planted. According to the scattered information, we can say that the Cobras are supplied to the Turkish assembly in the amount of 10 pieces per year. They are mainly equipped with Airborne troops. He himself witnessed the departure of the 2014 military unit of the Atyrau garrison on the Kobrakh and KamAZ in 41433 to the proving ground.

And as for helicopters, our military-industrial complex seems to be fine: there is a factory, orders, although small, also exist. Eurocopter Kazakhstan Engineering LLP, which owns a plant near Astana, carries out large-scale assembly, painting and assembly of EU-145 helicopters with special equipment, 1 pieces of 2014 were assembled for the Ministry of Emergency Situations and the Ministry of Defense of Kazakhstan on 20 January. Plans to release and EC-645 T2. It is difficult to report exact figures on the localization of production due to the lack of them in the public domain.

As a summary of this section, you can highlight the following points:
1. From the words of the Minister of Defense to a resident of Kazakhstan it becomes at least something understandable in relation to the development strategy of the country's military-industrial complex. I have a question for you, readers, how would you build a country's strategy in similar conditions?
2. As in any country, we have enough of our corrupt officials. As well as the mistakes that were made at the very beginning of whether another scam, or standing case.
3. Our country is small and everything is on the account of the President. Therefore, the Deputy Minister and the Prime Minister may also be put in prison (Serik Akhmetov, given 10 years). In this regard, a very entertaining show is obtained when you watch a live broadcast of the meeting of the President and the Government. Although at such moments you can gloat, sitting on the couch in front of the screen.

What fate has been prepared for the products of the Kazakhstan Paramount Engineering company and the military-industrial complex of the country as a whole, time will tell.