Ambassador Payette and Bandera "democracy": I gave birth to you ...

December 25 2015
41
Europe promised United Krajina a visa-free regime in about six months. What do you take? This is just a promise, we note, without an exact date (!), As well as an exquisite mockery, because it is a promise of the status of privileged ... tourists in Europe. 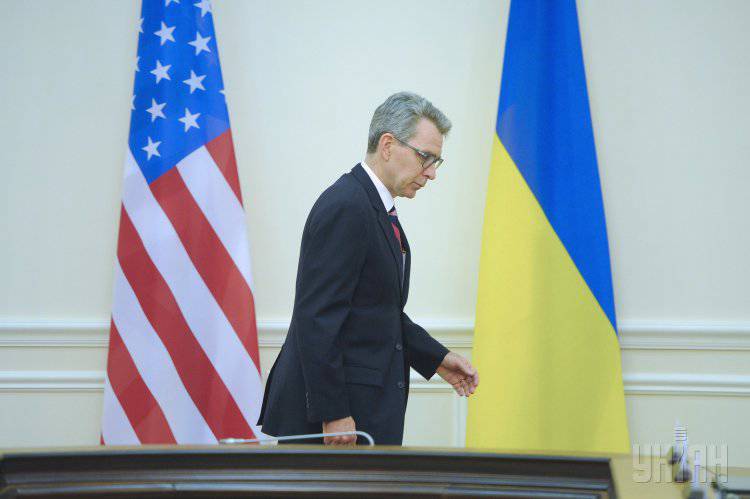 In general, you can promise United Krajina now anything you want, because she is not a tenant! To give a visa-free regime to a country full of paramilitary and military informal nation-formations, and the top officials of the country admit that, even in Brussels there will not be enough insanity! So, mock, it's sweet candy for the New Year's default, so it was something to talk to Svidomo masses.

Europe throws the Bandera Krajina to the mercy of fate, because the IMF’s default shot, which recognized Russia's sovereign debt for Kiev, is Europe’s move. And, perhaps, the revenge of the IMF manager Christine Lagarde of the United States for the dirty game against the former IMF leader Dominique Strauss-Kahn, which led to his resignation.

Europe leaves Krajina, in any case, finances. Remain allegedly the United States, represented by Jeffrey Payette. The Kiev rulers think that the whole army of Washington was behind Payette, and before Joe Biden's visit, this was, in general, true. But his last words were: "You (Bandera) must yourself be the masters of your destiny." Yourself! And under "Faberge" Payette is always on the ready plane to the States.

In reality, today, only his embassy seat is behind Payette, from which he can give advice, and nothing more. Yes, and lately Payette gives little advice, so two of his protégés, Saakashvili and Avakov (through Kolomoisky), gave up on everything and went to glasses of water. And this is only the beginning ...

Europe promises to give a visa-free regime in six months ... This means that in six months, the question of Bandera’s Kiev is being prepared, one way or another, to be resolved. It is recommended that everyone wear seat belts! Possible excesses: throwing glasses, grenades and grabs "a la Barna."

The American "democracy" for its colonies creates a unique "system of checks and balances", it is issued by the world media to the native masses for "democratic political competition." However, this “competition” is impossible without the American ambassador, who plays the role of the power vertical, that is, “Putin,” but is controlled from Washington in the democolonies. The reason Washington’s hatred of Vladimir Putin lies in the reduction to zero of the domestic political role of the American ambassador in Moscow.

The US ambassador always supports the weaker side in native conflicts, and, as far as is practically possible, balances the situation. If the American ambassador is taken out of the unique “system of checks and balances” - a democratized country quickly plunges into chaos of civil strife, that is the role and importance of Payette in Krajina, which threatens his silence, and, moreover, his return to his native land.

In fact, this first leads to political squabbles, the imbalance of the country's economy and, as a result, to an objective (!) Increase in corruption, because everyone must somehow survive in this lawlessness, and with the growth of chaos, and to strife. We see the beginning of this picture in the “seizure of Barna Yatsenyuk”, fights on the budget, in a grenade (!) In the hands of a deputy from Lviv Sobolev.

Based on American unique ideas about native democracy, Jeffrey Payette is now supporting the Yatsenyuk-Avakov block against Poroshenko-Saakashvili, although they are all his clients. He fulfills the clear instructions of US Vice President Joe Biden to support Prime Minister Yatsenyuk by simply banning his resignation: otherwise everything will collapse, not only the parliamentary coalition, but also the “system of checks and balances”. Since the rating of the government Yatsenyuk below the baseboard, and it is today the weak side.

On the other hand, this is the punishment of President Poroshenko for the failure of Payette’s instructions to dismiss "his" Prosecutor General Shokin, which he insistently demanded. Obviously, the demand for the resignation of the Prosecutor General was also dictated by the need to balance ukromemocracy.

The throw by the head of the Ministry of Internal Affairs Avakov, Yatsenyuk’s party comrade, a glass of water in the Odessa governor Saakashvili, Poroshenko’s assistant, can also be said to be authorized by Payette. In general, at the last time, saturated with tragicomic events, Jeffrey Payette’s silence is equivalent to his evacuation from the Kiev political scene. The imperious American vertical is taken out from the ukrodemocracy.

Ctrl Enter
Noticed oshЫbku Highlight text and press. Ctrl + Enter
We are
Results of the week. “I respect you, and you respect me, we are dear people”Memo to mercenaries in Africa
Military Reviewin Yandex News
Military Reviewin Google News
41 comment
Information
Dear reader, to leave comments on the publication, you must to register.