How the Victory Weapon was Cooked - T-34 in Nizhny Tagil 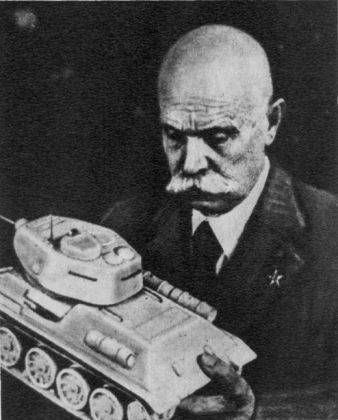 117 years ago 3 was born in Yaroslavl province in December. Soviet design engineer Mikhail Ilyich Koshkin was born. Created before the war, the tank T-34 rebuilt history: both the history of mankind, making a significant contribution to the victory over absolute evil, and the history of military equipment. T-34 became the ancestor and legislator tank fashion for decades to come - the combat vehicle design is so universal and technically perfect.


In addition to high direct combat characteristics - the tank was notable for maneuverability, excellent armament, armor resistance - the car had a high manufacturability of the design, which was an extremely important moment for the organization of its mass in-line production.

“Rivet tanks” is not quite the correct definition for characterizing the workflow, but if you look at the production of the T-34 during the war years, it is only that that comes to mind. The fact is that they are no longer riveted, and cooked. Yes, as no one in the world.

Without mass production, military victory would have been out of the question, and here Koshkin’s design genius combined with the scientific and engineering genius of dozens of people who participated in both the production and the improvement of the T-34. If it were not for the heroic work of engineers and craftsmen, welders, assemblers, women and teenagers in military factories, T-34 would not weapons Victory.

The world's largest center of production of the most important weapons of the era, tanks, became "Tankograd" - Nizhny Tagil. The first T-34 out of the gates of the Ural tank plant N183 them. Comintern 18 December 1941 of the year. In total, during the years of the Great Patriotic War, the Ural Tank Factory produced 30 thousand 627 tanks T-34-76 and T-34-85.

The hard work of engineers and technologists has given its results. During the war, the labor intensity of manufacturing one tank was reduced by 2,4 times, and the cost almost doubled, from 270 thousand rubles per tank to 142 thousand rubles. If the complexity of the manufacture of a diesel engine was reduced in 2,5 times, then the armored hull - in whole 5 times. What led to such a dramatic qualitative improvement in the working process for the manufacture of armored hulls?

In 1941, the Institute of Electric Welding of the Ukrainian SSR Academy of Sciences was founded in Nizhny Tagil from Kiev; its founder (1935 year) and director was Yevgeny Oskarovich Paton. All efforts of the Institute of Electric Welding were aimed at solving scientific, technical and organizational problems of the production of tanks in Nizhny Tagil.

One of the advantages of the T-34 was the sloping arrangement of its frontal armor and the cast tower (however, all the years of the war in different industries made both cast and welded and stamped towers). They cooked armor by hand, it was a long process, and only a highly skilled welder could do it.

Even before the war, Paton began experiments on the automation of the welding process in production. In 1939 — 1940, the creation of high-performance automatic submerged arc welding was completed at the Paton Institute. Decree of the USSR Government 20 December 1940, the new technology was introduced at 20 plants, it began to be used in the production of steel electric beams, bridge cranes, cars, boilers, ships.

Before the war, the Soviet industry received a real trump card in the sleeve - an automatic technology for welding steel that has no analogues in the world. In the production of tanks, it gave an extraordinary effect compared to manual welding. Nobody in the world has done anything like this - in the United States during World War II, tank armor was riveted, like on 19th-century cruisers, and in Germany - they were cooked by hand.

In Nizhny Tagil, the Institute of Electric Welding developed and introduced for the first time in the world the technology of automated welding of armored hulls of T-34 tanks. A production line was launched for the production of armored tanks. By the end of 1942, six units were already operating at the Ural tank factory, and later - nineteen. Other tank factories, Uralmash and the Voroshilov Kirov Plant, evacuated to Chelyabinsk, were also actively interested in submerged-arc welding. Installations for submerged-arc welding were commissioned either at one or another enterprise — only at the plants of the People's Commissariat of the tank industry, by year 1943 did 50 auto-welding installations work.

The performance of automatic welding was not in any comparison with the performance of other methods of welding. For example, the tower’s shoulder strap sector was manually boiled for 5 hours, and 49 minutes for an automatic machine. Instead of 280, highly skilled welders for automatic welding got 57 workers, often teenagers, after 5-10 training days. In addition, the input of one installation released seven welding transformers and eight chokes-regulators. Plants began to save up to 42% electricity.

There was another big plus: during automatic welding, the internal stresses in the metal decreased significantly. This made it possible to dispense with the use of annealing furnaces - local stresses disappeared.

There were problems. One of them were cracks that occur during the auto-welding of armor steels. Thin, often not visible to the eye. The solution at the Institute of Electric Welding was found - there was a proposal to place a low-carbon filler wire in the cutting edge. Thus, not only was the carbonization of the seam and the zone reduced, but the productivity of the process was also increased.

It later turned out that the flux reserves of AN-1 smelted before the war in the Donbass had been exhausted. Specialists began to work on the most difficult task, the solution of which was a fundamental contribution to the development of welding metallurgy. In a very short time, it was decided to use blast-furnace slags as a flux. The slag of the blast furnace, which works on charcoal, came up — there was practically no sulfur in it. To become a full-fledged welding flux, blast furnace slag lacked 10% manganese oxide and metallurgists added manganese ore to the slag.

A lot of difficulties and problems were solved with the release of the T-34, not a single book is enough to tell about the heroism of the creators and those who produced Victory weapons. Like any complex technical product, T-34 began to live its own life, overgrown with names, events, legends. And the main one was the legend of its designer, Mikhail Koshkin, who laid an unlimited resource in his combat vehicle.

Ctrl Enter
Noticed a mistake Highlight text and press. Ctrl + Enter
We are
Iron fist of the Red Army. Motorized and tank divisionsTANK (man, medium, car)
55 comments
Information
Dear reader, to leave comments on the publication, you must to register.