GOELRO - the beginning of big victories and the Great Victory 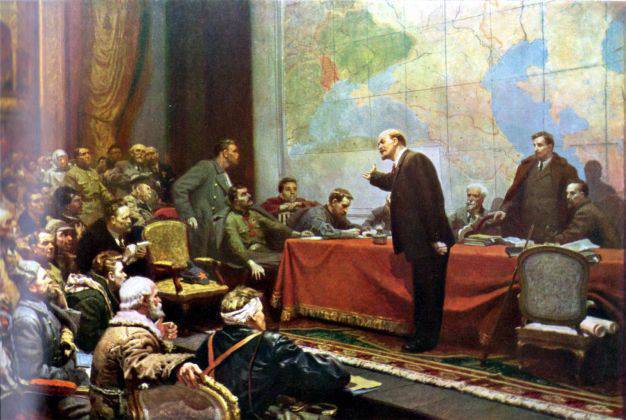 The abbreviation GOELRO stands for “The State Commission for Electrification of Russia”, the creation of which 21 of February 1920 of the year was signed by Vladimir Lenin. The commission was headed by Gleb Krzhizhanovsky - a graduate of the St. Petersburg Institute of Technology and the author of the project of the Elektroperedacha thermal power plant located near Moscow (now - Klasson State District Power Plant), built in the 1912 year.

Krzhizhanovsky, Leonid Krasin, Robert Klasson and many other creators of the plan worked in the Society of Electric Lighting, created in 1886 in St. Petersburg. The company united scientists and merchants in the “electrification of the whole country” business, most of its shareholders were foreigners, first of all, the Siemens concern. Even then, the first large-scale construction projects for power plants and power lines were being developed.

What did not have been enough before the revolution, if the implementation of GOELRO had to take the hungry, poor and cold power of the Soviets at the very beginning of the Civil War - in January 1918, the 1st All-Russian Conference of Electrical Industry Workers was held, which proposed the creation of a body to manage energy construction? But the main thing was missing - a centralized plan for the development of industry. Each owner, including a powerful “foreign lobby,” pulled the blanket over himself, and it was impossible to put the construction of industrial enterprises and energy facilities united in a single network into one framework.

It is impossible to deny the development of energy before the revolution - it was going at a rather fast pace, and the domestic electrical engineering school was considered one of the best in the world. So, by the year 1896 the number of power plants increased to 35, and the efficiency of such stations approached 25% (in modern combined-cycle power plants it reaches 60%). However, they all belonged to private owners, including 12 - the Electric Lighting Society. In terms of power generation, despite its faster growth (20 − 25%) than in other countries, Russia ranked eighth in the world, lagging behind not only the leading United States, but even tiny Belgium. In terms of quality, Russia was not inferior to the leading countries, but in the same year, 1913 in Russia produced only 14 kW per capita. h, whereas in the US - 236 kWh.

There were a lot of problems. For example, all power plants built in Russia are in Moscow, St. Petersburg, Kiev, Baku, Riga, etc. had a limited number of consumers and were not energy related. There was no single system in their development - the values ​​of their current and frequency (20, 40 or 50 Hz) had a huge variation. There were single-phase and three-phase networks ...

At the All-Russian Electrotechnical Congresses, which took place as many as seven from 1900 to 1913, they tried to solve problems, and at the height of World War I (in 1915), Krzhizhanovsky, Director of Electricity Transmission Station, made a report on the problems of the use of coal and peat near Moscow. In their report, they outlined the basic principles of energy construction, which became the basis of the GOELRO plan, and there were discussions and resolutions were adopted. But the plan was impossible to implement.

As already mentioned, a body to manage energy construction was proposed to create in January 1918 for the I All-Russian Conference of Electrical Industry Workers. Four months later Elektrostroy was created. At the same time, a successor and successor of the All-Russian Electrotechnical Congresses was formed - the Central Electrotechnical Council (CES), which included the largest Russian energy industry: IG Alexandrov, A.V. Winter, GO Graftio, R.E. Klasson , A. G. Kogan, T. R. Makarov, V. F. Mitkevich, N. K. Polivanov, M. A. Shatelen, and others.

Then, in April 1918, the concept of electrification of the country was made by Lenin himself in the article "Outline of the plan of scientific and technical work." In 1919, Krzhizhanovsky detailed this idea in his work “The Challenges of Electrifying Industry” and received an enthusiastic response to it. Less than a year later - in December 1920, the plan was developed.

After the decree on the creation of electrification work has gone at full speed. At the IX Congress of Soviets, the commission presented the results of its work - the 650-page plan, divided into the following chapters:

Thus, GOELRO was a plan for the development of not one energy, but the entire economy. The plan provided for the construction of industrial enterprises for the production of all the necessary electricity and scientific and technical base - 1921 was established the State Electrotechnical Institute (VEI) and the All-Russian Thermal Engineering Institute (VTI). And all this was tied to the development plans of the territories - the authors of the GOELRO plan proposed economic regionalization based on considerations of the proximity of sources of raw materials (including energy), established territorial division and specialization of labor, as well as convenient and well-organized transport.

As a result, seven major economic regions were identified: Northern, Central Industrial, Southern, Volga, Ural, Caucasus, as well as Western Siberia and Turkestan. The plan also began the development of the Kuznetsk coal basin, around which a new industrial area was established.

It was planned not only the restoration of specific industries, primarily heavy industry, but also the reconstruction, reorganization and development of the national economy. It provided for the construction of enterprises - future consumers of electricity. Among them - laid in 1927, the Stalingrad tractor, the basis of the domestic tank.

The GOELRO plan was the first step towards the industrialization of the country, and without it it would have been impossible. He did the main thing - he maximally raised the productivity of replacing the muscular efforts of people and animals with mechanical energy. Without electrification — especially in the long run — the development of industry, construction, transport, and agriculture was impossible. In addition, it provided for electrification of rail transport - a case that not all developed countries have coped with today, for example, the United States.

Designed for 10 — 15 years, the GOELRO plan provided for the construction of 30 district power stations (20 TPP and 10 HPP) with a total capacity of 1,75 mln kWh. At the same time, the electoral system of the country was carried out (electrification of old and construction of new railway lines, construction of the Volga-Don Canal). A separate emphasis was placed on hydropower engineering: the Shaturskaya and Kashirskaya TPPs and the Volkhovskaya HPP were first put into operation, and in 1932, Europe’s largest hydroelectric station, Dneproges, launched the first current.

By 1926, the program “A” of the GOELRO plan was implemented, which provided for the restoration of the destroyed energy economy of the country. By 1931, the plan was over-fulfilled - instead of the newly designed 1750 kW of new capacity, the 2560 kW was commissioned. By the end of the fifteen-year term stipulated by the plan - by 1935 - the Soviet power industry became the third in the world after the USA and Germany, and by the 1947 year, despite the terrible war, the USSR ranked first in Europe and second in the world in electricity production.

The GOELRO commission itself was abolished as early as June 1921 of the year, on the basis of which the State General Planning Commission, Gosplan, was created. Thus, GOELRO became the first state plan and marked the beginning of the entire subsequent planning system in the USSR.

Few people believed in the implementation of such a large-scale construction project. Known история with English science fiction writer HG Wells, who visited Soviet Russia in 1920 year. He got acquainted with the GOELRO plan and, relatively speaking, twisted his finger at his temple: “the implementation of such projects in Russia can be imagined only with the help of super-fantasy.” Lenin, in response, invited Wells to come through 10 years and evaluate the results. The writer arrived, however, not in 10 years, but in 1934, and was amazed at the result.

The electrification plan provided for a complete redrawing of social reality: the three most powerful construction projects — energy, industry and transport — were a single node. “Ilyich’s lamp” didn’t just come to the village hut - it changed it and filled it with qualitatively different contents. Attempts to apply GOELRO in other countries are often mentioned - the corresponding plans were announced in 30-s in the USA, Germany, Poland, Great Britain, France, Japan and many others.

Relative success was achieved only in the United States, where Franklin Roosevelt’s harsh state methods organized the construction of large state infrastructure facilities that were supposed to produce a huge amount of cheap electricity: Tennessee Basin Resources Management (TVA), Bonneville Dam and Grand Coulee Dam in the Far West , the Hoover Dam in the Southwest and others. However, a unified system was not created, and the private owner continued to “jerk off” the electric power industry, which in 70's led to a series of “blackouts” due to the increase in energy consumption. Today they are actually everyday in the USA.

The same “effective owner” began to successfully break down the unified system that became the catalyst for the development of 95 years ago - the unified power grid. The reorganization of RAO "UES of Russia" and the transfer of power plants into the hands of private investors, mockingly unofficially called GOELRO-2, led to a rise in the cost of electricity, stopping generating capacities and electrical industry enterprises, to blackouts, and finally to the accident at the Sayano-Shushenskaya HPP, an explosion at the Leninskaya substation in Kazan and the Chesmenskaya substation in St. Petersburg. You can redraw the reality in both directions, the choice - progress or regress.

Ctrl Enter
Noticed oshЫbku Highlight text and press. Ctrl + Enter
We are
How the icebreaker Krasin foughtThe story of one inventor. Gleb Kotelnikov
20 comments
Information
Dear reader, to leave comments on the publication, you must to register.