Transformers in the service of the fleet

December 27 2015
3
The modular approach to the construction of boats provides additional benefits in a special period.
In 2015, the Russian Navy received about ten rescue vessels of various types, including seven multifunctional modular boats of search and rescue support (PSO) of the 23370 project, built by KAMPO JSC near Moscow. 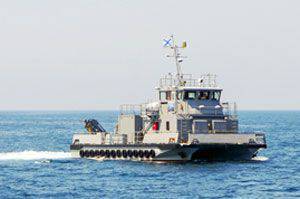 The multifunctional modular boats of the 23370 project are the first and only ships in the Navy at the moment, created according to the modular principle.

In the light of the military shipbuilding program being implemented up to 2050, one of the priorities of which is a modular approach to the design and construction of naval ships, the practical experience of creating such ships is interesting. To discuss the current topic, the developers and builders of boats of the 23370 project, General Director of KAMPO JSC Alexander Kulik and Deputy General Director of KAMPO JSC on shipbuilding, Andrey Shcherban, were invited to the editorial office of the Military-Industrial Courier.

- Alexander Yuryevich, in January 2014, on the pages of our publication (“New technology - for new tasks.” - Ed.), You talked about the development trends of rescue fleet and on the modular approach in shipbuilding as an example of new search and rescue support boats of the Navy. As we learned, KAMPO JSC completed the execution of the State contract for the supply of a series of 12 multi-functional modular boats of Project 23370. We sincerely congratulate you on this event. It seems that our readers will be interested to learn about the stages of the implementation of this project, about the experience of using new boats, as well as about your long-term plans for the development of a modular approach in shipbuilding.

Alexander Kulik: Thank you very much. The completion of the State contract is indeed an important event for us, because despite our internal confidence in the correctness of our concept and the success of the project as a whole, it must be admitted: it was not easy. The project was developed by us in collaboration with KB Quartet-SPb LLC from scratch, without relying on prototypes. But now I can say with confidence that this experience allows us to look boldly into the future and systematically develop the chosen line of activity.

- Andrei Alexandrovich, remind, please, for our readers, the technical characteristics of the boat.

- As far as we know, the modular approach to creating naval ships, incorporated in the military shipbuilding program before 2050, is aimed at reducing the type of ships, at developing constructive platforms, on the basis of which ships of various purposes will be created. Please clarify: the essence of the modular approach lies in the design of the vessel, in the possibility of replacing its structural elements? 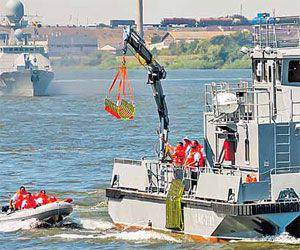 AK: I can only speak in relation to our modular boats, which are really constructive platforms, on the basis of which it is possible to create different-purpose vessels of the same model project. Our boats have a modular design, but this modular approach to creating a full-fledged boat, capable of performing functions as intended, is not limited. The modularity of our boats is twofold - it is not only constructive, but also functional. Each of them gives certain advantages.

A. Sch.: Constructive modularity lies in the fact that the boat itself consists of block modules, which are made with a high degree of readiness in our shipbuilding industry. They include full technical saturation and finish. In addition, each module has an envelope that allows it to be delivered to any region of the country by road, rail or water transport and to carry out a quick assembly of the boat in close proximity to the place of its subsequent basing. It is important that the final assembly can be carried out outside the shipbuilding enterprise, on a site equipped with crane equipment.

- What is the advantage of such a remote production? Isn’t it easier to build boats at an ordinary shipbuilding enterprise?

A. K.: At first glance, it is. And the traditional approach to construction nobody cancels. Large and technically complex ships, of course, must be built on specialized shipyards. Remote production in this case is inappropriate. But if we talk about small vessels, relatively speaking, of an auxiliary purpose, this is where the advantages of a constructive modular approach appear. It not only saves the lifespan of the mechanisms of the boat on the stretch, but also provides opportunities for the rapid build-up of forces in remote regions, the dispersal of shipbuilding capacities, and an increase in mobilization potential. And it can be extremely important in a special period when shipyards can be loaded with the construction and repair of more serious ships.

- With constructive modularity understandable. But you said that to create a vessel capable of performing its functions as intended, it is necessary to use some kind of additional modularity. What is its essence? 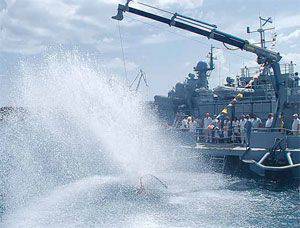 A. K.: I will explain. As a result of remote construction, we get not just a boat, but a universal platform that is easy enough to adapt to various tasks. In order for the boat to perform tasks for its intended purpose, it must be equipped with a complex of specialized equipment.

And here we come to the very functional modularity, which is as follows. The 23370 boats have a catamaran architecture that provides a large free deck area. With a relatively small length of 20 meters, the boat has a width of 9 meters and a free deck area of ​​about 100 square meters. On this area can be placed two standard sea containers - 20-foot and 10-foot. They are the functional modules in which the equipment that provides the boat the ability to perform special tasks is optimally arranged, unfixed and ready for use.

A. Sch.: And it should be noted that the functional modules, as well as the constructive ones, are manufactured at our factory and are delivered in finished form to the place of completion of the boat. That is, here there is a remote construction. The customer receives the entire complex of the vessel of a specific destination at the same time

- How is this principle of functional modularity applied in the series of boats for the Navy built by your company?

- If the containers are removable, then they can be installed on another similar boat?

A. Sch.: Technically, of course, they can not only on a boat of a similar project, but also on a ship or vessel of larger dimensions, provided there is enough space on the deck. This allows the flexible use of both the boats themselves and separately the equipment and property complexes, depending on the tasks of the operator. When containers are removed, the boat is used, for example, for the carriage of goods, people, large-sized vehicles, UAZ and Gazelle vehicles. Boats are equipped with a five-ton cargo crane-manipulator and can independently carry out loading and unloading operations.

- Now it becomes clear why boats are called multifunctional. An interesting approach. Probably, it can be applied not only in the Navy, but also in the civilian sector.

AK: We really believe in it and work in this direction.

- Where are the boats of the 23370 project today based? Is there any experience of their practical application? What are the crew reviews? 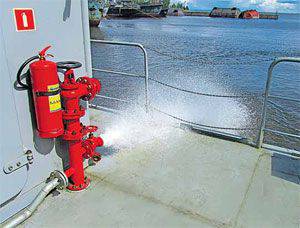 A. Sch.: Our boats serve in the Baltic and Black Sea fleets, the Caspian flotilla. The sailors of the Caspian flotilla note the possibility of using the vessel when working in the narrow channels of the Volga delta, in the canals and in the basing station. The boat can maneuver at low speed and make a turn almost on the spot due to the presence of hydraulic steering columns with an angle of rotation of 60 degrees on each side. Crews of boats confirmed this more than once. The high performance was noted at the Black Sea Fleet. According to the crew of the boat "SMK-2094", six seconds after giving the course, the boat can reach the maximum speed.

Vice-Admiral Alexander Fedotenkov, Deputy Commander-in-Chief of the Navy, on behalf of the Navy thanked our company for creating new generation boats, noting in particular the high quality of shipbuilding and the comfortable conditions created for the stay and work of the crew and specialists.

Of course, certain shortcomings are also identified, which are either quickly resolved or taken into account in the construction of the following orders.

A. K.: And practical experience, of course, there is. Within two years, our boats have already participated in several specialized operations and confirmed their multitasking. In 2013, in St. Petersburg, the head boat "SMK-2093" from the Baltic Fleet successfully completed the tasks of searching, lifting and transporting the sunken vehicle to the pier. The operation was carried out without attracting additional boats. The boat independently performed the functions of several specialized courts - search, diving, floating crane, barge and tug. In 2014, the boat “SMK-2094” from the Black Sea Fleet was brought to lift from the depth 12 meters of a large anti-submarine ship (BOD) “Ochakov” on the lake Donuzlav in Crimea. With the help of standard drainage facilities with a total capacity of 600 cubic meters per hour, the boat participated in pumping water from the submerged BOD compartments.

23370 boats are involved not only for special operations, but also for more peaceful events, such as the celebration of the Navy Day, participation in the International Navy Salon, providing security for the 19th St. Petersburg International Economic Forum (SPIEF 2015).

- Twelve boats built. The project confirmed its success. What are the future prospects?

AK: The prospects are quite positive, and we intend to continue on the path of a modular approach, which we are applying not only for the construction of boats. Today we have designed and built for the Navy five modular pontoon-based complexes (MPKB). They are floating berths and floating platforms consisting of transportable pontoons, which can be assembled and disassembled many times with the help of our own developed original Duplex quick-disconnect couplings. The topic of modular pontoon systems is extensive, multifaceted and worthy of a separate discussion. Now I’ll just say that the production of these systems uses the principle of remote construction similar to boats and, like boats, MPKB are equipped with specialized equipment in container versions. That is, there are the same two types of modularity - constructive and functional.

As for boats, I’m ready to report that in the development of the 23370 project we, again together with Quartet SPb, create a new catamaran boat of the 23370М project with improved characteristics. 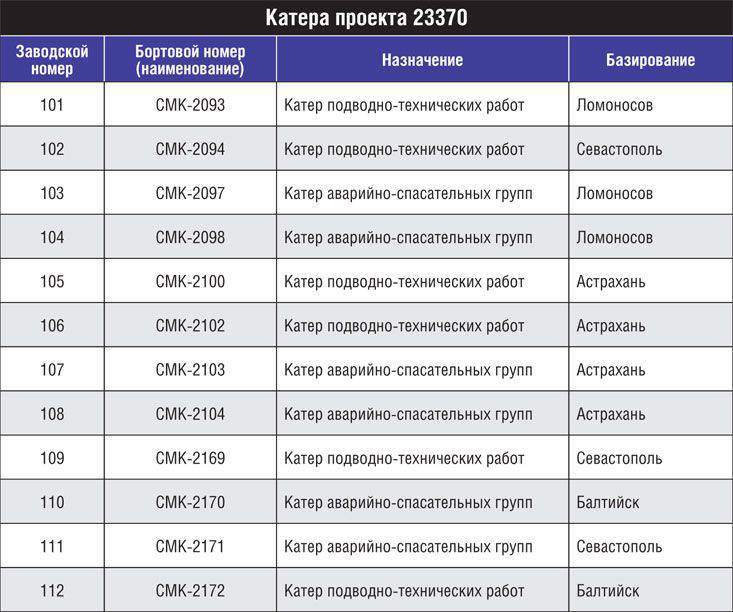 A. Sch.: Boats will have a greater displacement (up to 150 tons), greater hull length (24,2 m), higher full speed (13 knots) and improved habitability (3 human crew and 9 special personnel). The boat is designed for the class of vessels of mixed (river-sea) navigation.

AK: Today we have already concluded a State contract for the supply of three multifunctional modular boats of the 23370М project to the Navy during the period from 2016 to 2018 a year.

We hope that our work on the creation of boats of the new project, as well as those that have already been transferred to the Navy, will receive positive feedback from the command of the Navy, and from the crews.

- Thank you very much for the interesting conversation. We wish in the coming year further success in the creation of new equipment and new non-standard solutions!

KAMPO JSC (before corporatization in 1993 - the Orekhovo-Zuevsky Design Bureau of Oxygen Equipment) was established in 1953 on the basis of a resolution of the USSR Council of Ministers. The enterprise has developed and put into serial production sets of various equipment and equipment for aviation, astronautics, military and civilian fleets, industry, fire departments, emergency rescue services.

In 2015, the company completed the execution of a three-year State contract with the Russian Ministry of Defense for the supply of a series of boats for the search and rescue support of the 23370 project for the Navy.