Thus, the ground equipment of the Ukrainian Armed Forces has already lost more than is available today in the armed forces of Hungary, Denmark and Norway combined. However, there are many times more than lost. Enough for the formation of new units, formations and even two new operational commands.

Today, the ground forces direct subordination has the 19-I missile brigade, the 3 and the 8-th special forces regiment. The remaining units are distributed over four operational commands and airborne troops.

A part of all the listed equipment cannot be restored for various reasons and is suitable only for spare parts, almost all the equipment (except T-84U, BTR-3 and BTR-4) is on the verge of full development of the resource. Nevertheless, if Russia and Turkey are excluded, a significant part of the military potential of which is located in Asia, which makes comparison with them incorrect, not a single European army stands close to the Ukrainian one both in the number of vehicles and in the presence of personnel experience brutal ground contact classic war with the enemy is either almost equal or much stronger. The ground forces of Ukraine are really the strongest in Europe. This is largely due to the voluntary disarmament of Europe (physical and psychological), but that is another question.

Ukraine’s aviation situation is much worse.

In direct subordination of the command of the Air Force and Air Defense are 203-I training, 15, 25, 456-I airborne. The remaining units are divided into three air commands. 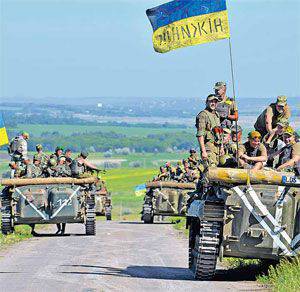 In the ranks of the Air Force remains up to 59 training aircraft L-39 (and up to 37 storage). In the Air Force and other power structures there are up to 30 Mi-8 helicopters (still about 18 in storage).

As part of ground defense - up to 30 of the C-300PT / PS battalions and to the 14 battalions of the Buk air defense missile system.

For aviation, wear technology is more significant than for ground forces. The only aircraft that the Ukrainian Air Force received during the post-Soviet period is the An-70. Other machines are difficult to use not only in combat, but also for combat training. Practically developed resource and ZRV. In today's Europe, in many countries, the Air Force is much inferior to the Ukrainian, but this is poor consolation for Kiev.

With regard to the war at sea, even the joint potential of the Navy and the border guards of Ukraine can be considered zero.

Despite such significant problems in the air and especially at sea, the Armed Forces of Ukraine, of course, are the most efficient in Europe. They have a lot of technology (albeit quite old) and most importantly, they, unlike the Europeans, are ready to fight. Given the catastrophic state to which the Armed Forces of Ukraine were brought by all four previous presidents of Ukraine (from Kravchuk to Yanukovich), as well as the blatant incompetence of the high command, one can only wonder how prepared they were. The example of the Armed Forces of Ukraine once again confirmed that only a conscript army can wage a serious war. If the Ukrainian army was “professional,” it would have been disintegrated long ago. And the “volunteer battalions” sent to the Donbass together with the Armed Forces of Ukraine turned out to be, as was to be expected, legal bandit formations, they are the real punishers.

Today, the Armed Forces of Ukraine - the most Soviet army in the world. She has an extremely low level of training for commanding staff, an ugly attitude to the ordinary composition, indiscriminate drunkenness. Moreover, the current Kiev regime has managed to surpass the Soviet. The leaders of the USSR, unlike the Ukrainian ones, did not turn the war into a personal business; they did not go down to selling the bodies of the dead soldiers to their relatives. Let the maximum price, but sought to win, and not to delay the war to infinity. For Kiev, war is the most important business and at the same time domestic and foreign policy resource. However, almost all of today's Ukrainian leaders managed to visit the party and / or Komsomol workers, so there is nothing special to be surprised about.

On the other hand, the army serves primarily the country, not the regime. That is how they understood the situation in the Soviet army and were absolutely right. In addition, the most important advantages of the SA, which preserved the Armed Forces of Ukraine, were the above-mentioned willingness of people to fight and die, and in the most difficult conditions, which very often creates not so much the enemy as his own command. It was this Soviet legacy that made the sun more battleworthy than one would expect. Accordingly, the transition to NATO standards, about which the Ukrainian leadership endlessly speaks, is the fastest and most effective way to completely deprive the APU of combat capability, in fact destroy them. This is already visible today: the most Europeanized part of the population of Ukraine (residents of large cities and Galicia) at all costs try to avoid mobilization. The local “quilted jackets” are fighting for the territorial integrity of Ukraine in the first place, which the Ukrainian agitprop tries not to notice.

Further prospects of the Armed Forces of Ukraine depend on the economic and political situation in the country. In this regard, it is necessary to understand the nature of what is happening in the country over the past two years. Ukrainian reality is crammed with two well-established systems of myths. In one system of myths in Kiev, the Americans organized a Nazi coup, having the ultimate goal of Russia, in response to which the people of Donbass in one burst raised an anti-fascist uprising. In another system of myths, the Ukrainian people made a revolution of dignity and unanimously made a European choice, in response to which imperial Russia committed criminal aggression against Ukraine.

In reality, by the end of 2013, the two main oligarchic groups (Dnepropetrovsk-Kiev and Donetsk), who ruled Ukraine, brought the country to such a state when the peaceful coexistence of these groupings became impossible, the need for redistribution of spheres of influence in the economy and as a result in politics became necessary. And then President Yanukovych decided to create a third group, called the "Family." A similar state of affairs led to a grandiose criminal-oligarchic showdown that resulted in a civil war. In the first act, known as the Maidan, the Dnepropetrovsk-Kiev group destroyed the "Family" and brought down the Donetsk group. In the second act, known as the occurrence of the DPR and the LPR, the Donetsk group tried to at least partially recoup. Of course, on the side of both groups, external forces intervened (and the appearance of the West was on the side of the Dnepropetrovsk-Kiev one), but on the whole, what was happening had and is of intra-Ukrainian economic nature.

Of course, the winning group was expecting much more economic assistance from the West, it was in no way going to lose the Crimea and the Donbass. Objectively speaking, the West openly threw Kiev. However, as mentioned above, the new Ukrainian government very quickly turned the war into a business, multifaceted and profitable. At the same time, you can always expose yourself as a victim to the West and blame everything on the war inside the country.

The main thing is that the oligarchic group that has come to power successfully performs the task for which it organized the Maidan - the final embezzlement of Ukraine. Even in the West, they began to notice that corruption in the country today is even greater than under Yanukovych, although it seemed that there was nowhere else. Naturally, this finishes the Ukrainian economy and leads to the complete impoverishment of the population, although it has not flourished before. Of course, there is no talk of any “European way of development” even as a distant future, the leadership of Ukraine is going to integrate into the West exclusively within its own personalities. Despite the overwhelming propaganda, the population of the country has already begun to understand: it is not exactly what they promised, or not at all.

Ukraine now has a fairly large military budget, but a significant part of it was originally laid out for looting (this is one of the most important components of a business in a war). The new equipment is still practically not produced, only the old is reanimated, and, as a rule, by “cannibalization”, that is, the complete dismantling of some machines to restore others. The APU requires a total rearmament (even of the ground forces, especially the Air Force and Navy), for which there is obviously no money. While it is not something that did not start, and even not planned. As a result, in a few years, the problem of developing a resource will be fatal for a technician.

The main problem of the APU, however, is different. In Ukraine, there is simply no political entity that is not in words but in deeds is interested in their restoration. The current leadership, as mentioned above, has real goals and objectives completely different. Who can replace him is completely unclear. Ukrainian Nazis exist mainly on the money of oligarchs with Israeli citizenship, so it is very difficult to take them seriously. Saakashvili, unlike Poroshenko, Yatsenyuk and others, hates Russia sincerely, and not because it is commercially beneficial, and at the same time wants to become at least the Prime Minister of Ukraine. It is possible that he will succeed even for a while. But it will not last long anyway. And not because of the Georgians, but because there is too much idealism in it. In Ukrainian politics, this category is not in principle.

As for the people of Ukraine as a whole, a significant part of them still believe in the “revolution of dignity”, “ideals of the Maidan”, “European choice” and “formation of the Ukrainian nation”, which, alas, does not cease to be just cannon fodder and milk cow for the ruling group. Awareness of this situation and the transformation of the masses into a real political subject is theoretically possible, but still stories Eastern Slavs had no such precedents. Therefore, the prospects of Ukraine in general and its Armed Forces in particular are seen as very sad.