The Pentagon helped Assad secret from the White House 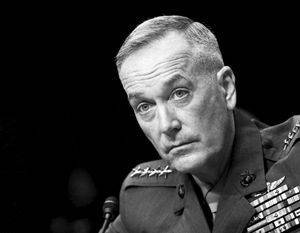 Since the autumn of 2013, the Pentagon has been transmitting intelligence information about ISIS and "al-Nusra" to Damascus, thereby helping the troops of Bashar al-Assad. With such a sensational revelation made the British press. Experts believe that the American generals showed more sobriety in assessing the events in Syria than the US administration.


The leadership of the Joint Chiefs of Staff of the United States Armed Forces (CLS), led by Martin Dempsey, has long tried to convince the White House that the withdrawal of Bashar Assad could bring extremists to power, and Moscow and Beijing are not rivals, but Washington’s allies in the fight against terror. This statement was made on Tuesday by the famous American publicist Seymour Hersh in the British edition of the London Review of Books. “Persistent confidence” of President Barack Obama that Assad should leave and that there are moderate opposition groups in the country that can break him led to the emergence of secret opposition within the American generals, including from the majority of representatives of the KSSH, reports RIA “News", Referring to Hersh's article.

CIA against the American "military"

“In their view, the administration has become hostage to the thinking of the Cold War era regarding Russia and China, and regarding Syria it does not take into account that Moscow and Beijing share Washington’s fears about the spread of terrorism and also believe that the Islamic State group (DAISH, is banned in Russia and several other countries) should be stopped, ”the article says. According to Hersh, similar assessments of the military sounded in the summer of 2013, when the Defense Ministry’s Intelligence Directorate (RUMO) and KSSH presented a secret report, according to which “the fall of Assad will lead to chaos and, possibly, the seizure of power in Syria by the extremists” according to the Libyan scenario.

The article is based on the confessions of two high-ranking military men - this is General Michael Flynn, who led RUMO in 2012 – 2014 years, and an anonymous source, presented as a long-time adviser to the CNSC. According to them, despite the objections of the generals, another department continued to help the rebels - the CIA.

“The former senior adviser to the Chiefs of Staff Committee told me that the document contained the most diverse assessments, from various signals and data from satellites to intelligence information, and it criticized the Obama administration’s focus on continuing funding and arming the so-called moderate opposition,” writes a publicist .

However, he said, “by that time, the CIA had been in collusion with the allies from Britain, Saudi Arabia and Qatar for more than a year weapons in order to overthrow Assad, from Libya to Syria through Turkey. ”

"The moderate opposition has evaporated"

How do the military capabilities of Russia and NATO
The Pentagon considered Turkey as its main hindrance in Syria. As Hersha said, thanks to Ankara, the secret American program to arm moderate opposition in the fight against Assad has become a large-scale program for technical, military and logistical support to the opposition as a whole, including Dzhebhat an Nusru and ISIL. The moderate opposition evaporated, and the Free Syrian Army was a “stump” stationed in the rear, at a military base in Turkey. "The assessment was gloomy: in Syria, there is no viable" moderate "opposition to Assad, and the US is arming extremists," the author writes.

General Michael Flynn, who is also quoted by Hersh, confirmed that his department repeatedly warned the civilian leadership about the serious consequences of removing Assad from power. “He said that jihadists controlled the opposition, and Turkey didn’t do enough to curb the flow of foreign fighters and weapons across the border,” the author writes. According to him, "Flynn said that if American society saw our daily intelligence reports, it would lose its balance."

The author also cites the opinion of the ex-adviser of the committee that "the policy of arming the opposition to Assad was unsuccessful and had negative consequences." According to him, “the committee was convinced that Assad did not need to be replaced by fundamentalists, but the administration’s policy was different: they wanted to remove Assad.” “But extremists dominated the opposition. And who was he to change? It is nice to say that Assad should leave, but this means that any other is better. This approach was a problem, ”Hersh said.

"Obama did not know about this"

Key words: USA, CIA, special services, Russia and the USA, Syria, US foreign policy, Pentagon, US Army, war in Syria, ISIS, IS
As a result, Pentagon intelligence, secretly from the White House, decided to help Assad. Starting in the autumn of 2013, the CNS took steps against the common enemy, without coordinating them with the political leadership. “Germany, Israel and Russia were in contact with the Syrian army and had some influence on the decisions of Assad - and it was through them that US intelligence began to be sent,” the author argues.

“We were not eager to deviate from Obama’s stated policy,” said the same Councilor’s Councilor. - But the exchange of intelligence with other countries through communication channels between the military could be productive. It was clear that Assad needed the best tactical intelligence and operational recommendations. The KSH concluded that if these needs were met, then the common struggle against Islamist terrorism would be beneficial. Obama did not know about it, but Obama and in general does not always know what the KSSH is doing in certain circumstances. This is true for all presidents in general. ”

“When the flow of American intelligence came, Germany, Israel and Russia began to transmit this information about the whereabouts and intentions of the radical jihadist groups of the Syrian army, and in response Syria shared information about its capabilities and intentions,” writes Hersh. “There was no direct contact between the US military and Syria.” According to the same KNS adviser, "it was not some kind of sinister conspiracy of the chiefs of staff to support Assad, bypassing Obama."

By the way, that the Western intelligence services are in contact with Damascus, it became known two years ago. This was admitted to the BBC by the Deputy Foreign Minister of Syria, Faisal Mikdad. "I can not tell you about all the details, but we were visited by representatives of Western intelligence agencies, including the British ones," he said in January 2014.

But then this work was stopped. One of the main reasons Hersh calls the resignation of Martin Dempsey last summer. After that, the "indirect path of the American military to Assad disappeared." His successor, General Joseph Dunford, publicly took a tough anti-Russian stance.

According to the author of the publication, for Dempsey "it remains a mystery why Obama continues to defend Erdogan, given the weighty evidence gathered against the American intelligence community, as well as facts indicating that in confidence Obama agreed with these evidences."

“Dissent persists,” Hersh states. “The longtime adviser to the General Staff was unable to hide his contempt when I asked him to give an assessment of Syrian US policy.” “The decision on Syria is right under our nose,” said the consultant. - The main threat for us is ISIS, and all of us - the United States, Russia and China - need to work together. Bashar will remain in power, and after the situation in the country stabilizes, elections will be held. There is no other option. ”

The press service of the White House Tass said they have not yet studied the article Hersh.

"Many in the Pentagon do not like to fight"

The deputy director of the Institute of the USA and Canada RAS, retired major general Pavel Zolotarev does not exclude that the US military intelligence did help Damascus secretly from the White House with the mediation of colleagues from Germany, Israel and Russia.

“This is a standard trick, which is not voiced, but is widely used. Such things do not necessarily need to be reported to the president. Intelligence agencies have a certain degree of freedom - for the sake of secrecy, and they use it. Although this, of course, contradicts the established order. But I don’t think that the White House will now apply any measures to General Flynn, ”Major General told VIEW.
Zolotarev also recalls that the hardware competition between the CIA and the Pentagon has always existed, so it’s also quite plausible that their positions in Syria have diverged diametrically.

In contrast to the White House staff, an American political analyst, a former Pentagon and State Department official, Paul Grenier told the VIEW newspaper that he had already seen Hersh’s article. “I must remind you that this is a very respected journalist with a lot of experience. This does not mean that you can be charged for every word, but since he writes like that, it means that you need to take it seriously, there is something in it, ”said the expert.

“As for the essence of the article, it is quite conceivable - the difference in opinions between the Pentagon and the CIA, especially on such delicate issues as the Syrian war. As is known, in the realm of "real politics" we have to deal with unpleasant organizations. American foreign policy uses many dangerous groups, and this can then go sideways. Remember the "contras" in Nicaragua or the Mujahideen in Afghanistan? They were far from angels. This is a very dangerous game. And the Pentagon has to then fight in new wars. In 90 I myself worked as a translator with many Pentagon generals. So, many of them, in principle, do not like to fight. These are politicians, theorists are very dashing, that they willingly start wars, ”summed up Grenier.

Ctrl Enter
Noticed oshЫbku Highlight text and press. Ctrl + Enter
We are
What you didn't want to know about EnglandInterview by President Bashar Al-Assad to the Sunday Times
Military Reviewin Yandex News
Military Reviewin Google News
45 comments
Information
Dear reader, to leave comments on the publication, you must to register.