The Golden Apple of Eris by Russian Human Rights Defenders

December 25 2015
34
The entry into force of the law on "foreign agents" greatly overshadowed the everyday work of non-profit organizations in Russia that received foreign funding. However, during discussions at NPO congresses, they found a way out of the situation - creating a union that would be able to lobby for the interests of non-profit organizations when interacting with government authorities. However, the non-governmental agents themselves perceived this initiative as a means of obtaining additional funding, which, in fact, sabotaged the entire project implementation. 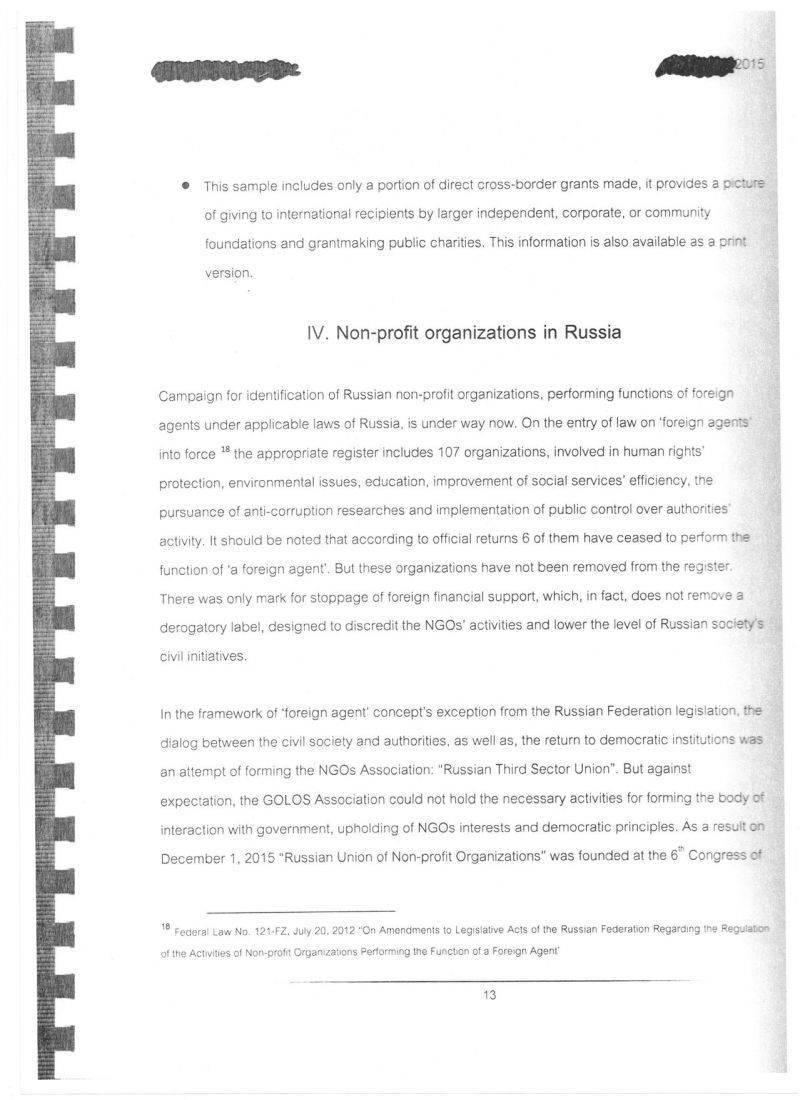 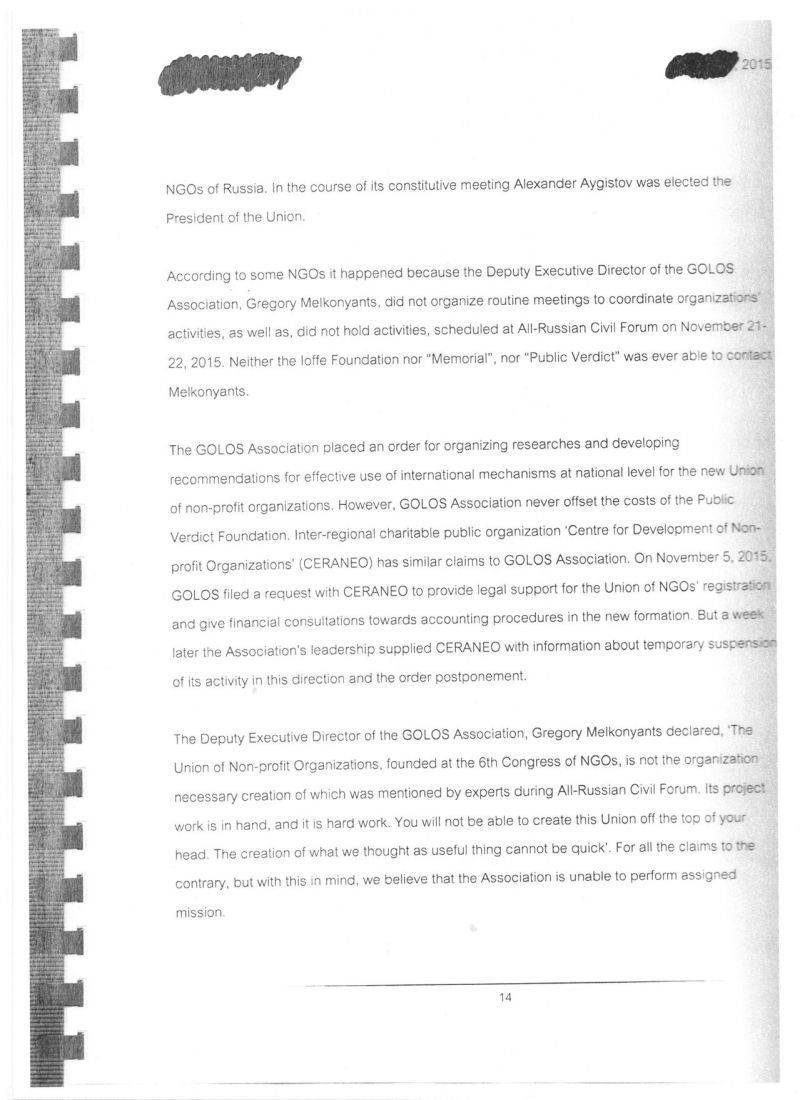 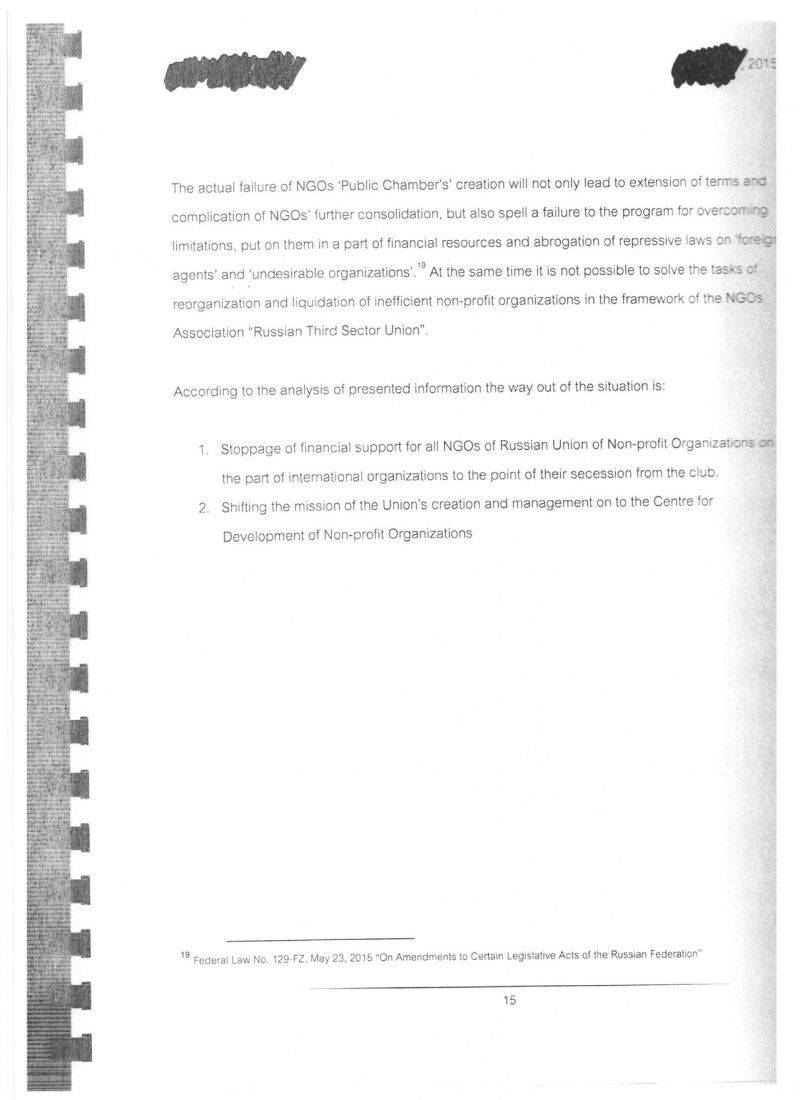 The document reveals with the naked eye the style of work of Russian human rights defenders - the need for a joint division of foreign sponsorship among the leading “missionary” organizations. The report notes that the Golos Association is not able to organize and carry out the necessary measures to create a body for interaction with the state, upholding the interests of NGOs and democratic principles - the Russian Union of the Third Sector. In addition, it is indicated that a number of NPOs are extremely dissatisfied with the work of the curator of this process - Grigory Melkonyants, Deputy Executive Director of the Golos Association. The Golos movement ordered advisory, research, legal and other services from various non-profit organizations, but the leadership of the movement decided to postpone payment for the work done without the consent of the implementing NGOs.

So far, Golos has solved problems of cooperation with leading 1 NGOs in December 2015, during the sixth congress of Russian NGOs, the Russian Union of Non-Profit Organizations was created, which de facto became a competitor to the unformed Russian Union of the Third Sector. What, in fact, Melkonyants confirms with its statement: “The union of NGOs created by the VI congress of non-profit organizations of Russia is not the organization, the need for the creation of which was spoken by experts during the Civil Forum. The work on creating such an organization is being done and this is a lot of work. kondachka, you cannot create this union. It is not a quick process to create what we considered useful. "

(http://polit.ru/news/2015/12/02/nko_com/) Moreover, according to experts who analyzed the activities of Golos, the failure of the movement not only complicated the creation of the NPO trade union, but also disrupted the program to overcome the limitations set by Russian legislation, the sources of financing NPOs and the abolition of repressive measures against non-profit organizations, in particular laws on "foreign agents" and "undesirable organizations." In other words, it prevented an international project to change the legislation of the Russian Federation for the free work of non-profit organizations in the political direction, the protection of recipients of foreign sponsorship and the financing flows from abroad.

All in the best traditions of the "human rights business" - the organization of unfair competition, the discrediting of the opponent, advertising the customer and receiving thanks in the form of a kickback or the possibility of participating in the joint sawing of sponsorship financial income. In an interview with a senior advisor to the Norwegian Helsinki Committee, an anonymous employee "Vote" talks about the internal kitchen of the organization and the process of turning the western grant into an elegant cut with a flick of the wrist. Some part of the funds went to overcome differences with the disgruntled curator of Golos of the creation of the Russian Union of the Third Sector. Another part of the sponsorship money by the decision of the Golos management went to the "stabilization fund." It is noteworthy that the employees of “Voices” themselves find it difficult to answer whether such a fund exists at all. The next article is the mastering of funds - bonuses to the chairmen of the movement and especially distinguished employees. Plus spending on banquets in the restaurants "Siberia Moscow" and "Parisien". Unfortunately, the budget is not rubber, so there is no extra money left to pay for the services provided to Golos by the Iofe Memorial Fund, the Public Verdict and the Center for the Development of Non-Profit Organizations.

Summarizing the information presented by the employee of Golos, the author writes: “The statement of the NGO employee clearly shows what is happening inside non-profit organizations in the Russian Federation. Judging by this information, the work of many NGOs is not about upholding democratic principles and freedoms, developing civil society, the fight against the arbitrariness of the authorities and the security forces, the monitoring of electoral processes, and an internecine squabble for financial support. International funds should understand one thing - before cooperating Russian human rights activists, it is necessary to eradicate corruption within their organizations. "

Like it or not, the creation of a trade union of non-profit organizations will not affect the effectiveness of the work of non-profit organizations. The very desire to unite pro-Western human rights defenders is nothing more than the desire to get the opportunity to cut common funds at a higher level. Even Honore de Balzac in his novel Father of the Goryo described a situation that perfectly illustrates the work of Russian NGOs. "Cruelty, calculation, money reign everywhere. There are no principles, there are only events, there are no laws, there are circumstances. Success falls to those who manage to marry events with circumstances in order to direct them themselves. Considering that fifty thousand good places are all can't find any more, you have to devour each other, like spiders in a can. "