December 24 2015
366
A few days before the end of 2015, Anatoly Chubais for the four hundred “key” employees of the state corporation Rosnano summed up the outgoing year in a specially leased Moscow club on this occasion Duran bar. The video of Anatoly Borisovich’s performance literally in a few days managed to fly up to the first lines of the Runet’s top list, and not because the head of Rosnano at the party showed a certain “cosmic” nano-development, which is called, will make a technological revolution. The number of views of the performance of the main “nanobinovnika” of Russia grew by thousands per hour because of the words that Chubais, standing in the dimness in front of the hall, said:

We have a lot of money (delight in the hall)! There are just a lot of them ...

In principle, even if Chubais had said only these words, then they would be enough so that against the background of the worsening economic crisis in the country, millions of people began to itch again. But Chubais continued:

That is why we had the opportunity not only to roll over with big money, but also to invest them in our long-term strategy, which, as you know, was not just accepted, but also completely solved all the problems, including the problem of financial failure of 17 of the year. No, we will not fail in 17, we are fine. In 2015, we will definitely be able to produce products for the very 300 billion, which were our main indicator. (...) The Board of Directors approved the possibility of us, from the superplan we received according to the results of 2015, to send a significant part of it to the payment of a bonus from the salary saving fund. Accordingly, we have a second prize in addition to the first (stormy applause in the hall). It will not be instant, but we will try for the bazaar answer.


So, the head of a state-owned company, a company that receives the lion’s share of financing from the state budget, states that the company has so much money that there’s nowhere to go. Well, it would seem that employees of Rosnano need to rejoice - two final awards, plus a New Year's corporate event in one of the capital’s pathos clubs, plus statements that the company’s billions will flow into the treasury at least until 2020 of the year (officially this period, Rosnano in the format of state subsidies alone will receive about 50 billion rubles). But it just so happened that the Russians, who watched the video, didn’t show vigorous joy for the “nanocompany” with megatrats. The most decent and mild word in the comments to this feast - “overtook!” The most mild…

Perhaps the reaction to Chubais’s statements about “we will try to answer for the bazaar” and “we have a lot of money, just a lot of them” would be somewhat softer if such statements could be afforded by other companies with their employees, as well as representatives of small and medium businesses that today have to spin in a griddle at least to keep their own business and the backbone of the workforce. Perhaps there were no interjections with the letter “x” or “b”, if only a few days ago the country’s leaders did not hear from the state’s leaders that it’s not necessary to wait for indexation of social benefits for inflation, the retirement age, “Hosh-not Hosh”, increase, and pensions for working pensioners - to freeze. That is, the state, it turns out, has no funds for the maintenance of people who gave it their working life, sacrificing their health, but they have the means for Rosnano, in which there are obvious problems with sacrifice in the name of Russia, excess. Is this not a step towards the stratification of society, which, it would seem, has only recently begun to acquire points for consolidation? Or this is precisely the main message of Mr. Chubais, who has decided that what, then, and Russia’s public consolidation cannot be allowed ...

You can think about this topic for a long time, spitting often, frowning more often, but the fact remains - it was said by Mr. Chubais that this “director himself” will surely appear on the Web and thereby receive, according to least national publicity. The head of “Rosnano” makes it all his appearance make it clear that, as they say, to him, public opinion and the “concerns” that we express are our servants, because the servants will swallow them over time, and not one anti-corruption fund or committee , as already reported in one of the articles, dozens) will not conduct a detailed investigation into what exactly Rosnano spent 300 mentioned by Chubais for billions of rubles, and what will it spend on new tons of bills in the coming years?

At the same time, the main creator of nanotechnology in Russia also makes it clear that the funds with which the same pensioners and public sector employees will sponsor Rosnano are an already resolved issue. At the same time on the website Rosnano The overwhelming majority of investment projects of the state corporation are not supplied with at least some information about how effectively the funds allocated from the budget were spent. At best, Rosnano informs how much the company has invested in one project or another. In a number of cases, Rosnano speaks about participation in the investment project and the money spent on it, but it also adds that the state-owned company has already left the project. And there is no information about why it came out, nor about who the money allocated was spent in the end. From the material "Rosnano":

It must be that during the Moscow corporate party, which cost more than 2,2 million rubles (the money, as the Rosnano press service informs, it turns out, was allocated by the board members of the infrastructure and educational programs fund) employees of the Chubais company laughed at us for a long time "Hawkes" of this kind of "reporting", and also understands what kind of "high-precision pipes" are? ..

Another interesting material from “Rosnano” from December 23:

The Russian private space company Dauria Aerospace, a portfolio company of the fund I2BF-RNC Resources Fund, whose investor is RUSNANO, successfully completed the sale of its satellites in near-Earth orbit. The buyer was the American company Aquila Space, which creates its own satellite constellation. Both the spacecraft themselves and the necessary licenses for the use of Dauria Aerospace technologies were acquired.

It turns out that this is the most private shop “Dauria Aerospace”, in which Rosnano invests since 2013, it is not known how much budget funds are spent on the profits of Russian taxpayers for selling the already launched satellites to the American “partners”. An interesting strategy of investing public funds, isn’t it ... Interesting, especially when you consider that enterprises that are strategic for the Russian economy, including defense enterprises, have to work in workshops at a temperature of + 3 Celsius - and then only those who did not have time optimize to the fullest extent "in order to meet the needs of Anatoly Borisovich and his phenomenally successful office Horns and Hooves." 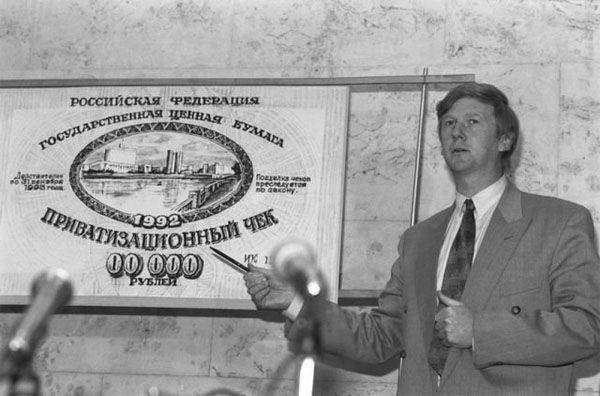 It remains only to calculate what account this statement is from CHAB (starting with statements about two Volga for one voucher), after which people feel like “wooden Pinocchio”, and the unsinkability of the great combinator becomes more and more obvious ...

Ctrl Enter
Noticed oshЫbku Highlight text and press. Ctrl + Enter
We are
Results of the week. "The attraction of unheard of greed!"Results of the week. "In the Greek Hall, in the Greek Hall ... the mouse is white!"
Military Reviewin Yandex News
Military Reviewin Google News
366 comments
Information
Dear reader, to leave comments on the publication, you must to register.