Diplomats are cunning as if they will resolve the Syrian crisis

December 24 2015
11
At the end of last week, the UN Security Council immediately adopted two resolutions on the Syrian issue. On Thursday, 17 December, he developed measures to combat the financing of ISIS. On Friday, I voted for the resolution, which contains a "road map" to resolve the civil war in Syria. Both documents were adopted unanimously. The consensus took place thanks to the mutual understanding reached between the USA and Russia. It was these two countries that jointly prepared both resolutions. 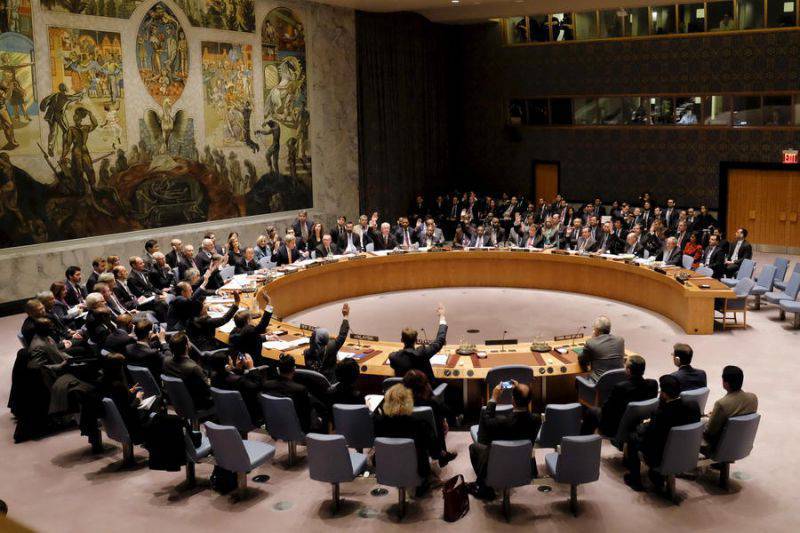 The countdown comes from the "Arab Spring"

The world media hastened to assess the amicable voting and the meaning of the adopted documents as an obvious progress of diplomacy. Skeptics called the new resolutions on Syria "run on the spot" and even more sharply - "imitation of activity". Admittedly, there are grounds for such assessments. First, we recall that the day of voting in the UN Security Council coincided with a sad date - the fifth anniversary of the so-called “Arab spring”.

It starts from 17 December 2010, when, in response to the harassment of local corrupt officials, Tunisian fruit vendor Mohammed Bouazizi from Sidi Bouzid self-immolded. This desperate act was a pretext for mass popular protests in Tunisia, which ultimately led to the overthrow of the government and the flight of the country's president.

Unrest soon spread to other Maghreb states - Algeria, Libya, Morocco, Mauritania. The entire Arab world — Egypt, Yemen, Syria, Iraq — flared up behind them ... The riots and protests were almost everywhere. They choked on the monarchies of the Persian Gulf. The authorities of Bahrain, Kuwait, Oman, Saudi Arabia paid off protesters with an increase in social benefits, student scholarships and salaries. King Abdullah of Jordan reassured his subjects by the change of government. His Western counterpart, the Moroccan king Mohammed VI, to control the situation, had a banal promise to carry out a fundamental constitutional reform.

In the opinion of our authoritative statesman Yevgeny Primakov, expressed by him in April 2013, the “Arab Spring” began spontaneously, but its distribution in Arab countries is already connected with the latest technologies - the Internet, television, and other communications. The Islamists "saddled" this process. Their organizations took control of the situation. ”

Unlike today's political coquetry, when instead of the name of the terrorist group Islamic State of Iraq and the Levant hypocritically impose the obscure Arabic abbreviation DAISH on the world, the experienced Yevgeny Primakov is very precise in his wording “Islamists”. This is the way not of the Muslims we are used to - the followers of Islam, but representatives of the most radical, fundamentalist trend in this religion.

Raised their monarchies of Saudi Arabia and Qatar. History this stretches from the last century, when the funds of rich countries began to finance Wahhabi groups aimed at promoting their movement in Islam and even “holy war” - jihad. The terrorists of Al Qaeda, known to the world, and their followers have bred on this yeast. They were noted in Afghanistan, the North Caucasus, the United States, the Arab East, and Africa.

The Islamists put their hands to the overthrow of the heads of Libya, Egypt, but stumbled on Syria. For years, its land has become a painful point not only for the Arab world, but also for the entire international community. The choice of these countries was not accidental. Their leaders were careless to quarrel with the monarchs of the Gulf. In response, they received brutal armed aggression by Islamic terrorists.

The fact that behind these wild bearded men are Saudi Arabia and Qatar, the former Iraqi Prime Minister Nur al-Maliki has repeatedly said. Evidence that the monarchies of the Persian Gulf financed the group of ISIS and helped her to stand up, slipped and in the Western press. Last year, for example, the American newspaper The New York Times published material on how large sums of money were allocated by the private foundations in the Persian Gulf for the war against undesirable Saudis regimes.

The article even called the name of one of these financiers - entrepreneur Ghanim al-Matiri. He openly sent money to Islamists fighting against the army of Bashar Al-Assad. I even set my own dachshund - 2,5 thousand dollars for an action movie.

All these evidences led to the fact that this February the UN Security Council adopted a resolution calling for the suppression of the financing of terrorism, in particular, the sale of ISIL oil, as the main source of criminal proceeds of this group. The February call of the Security Council remained essentially a figure of speech. After the adoption of the resolution, no practical action by the UN followed.

It is no coincidence that this autumn German Deputy Chancellor Sigmar Gabriel, in an interview with the German edition of Bild am Sonntag, again focused on the problem of financing terrorist groups and specifically addressed Saudi Arabia with a demand to stop supporting radical Islamists. “We need Saudi Arabia to take part in resolving regional conflicts,” said Gabriel. “But at the same time, we must clearly indicate that it is time to look back. Wahhabi mosques around the world were funded by Saudi Arabia, and from these communes many dangerous Islamists entered Germany. ”

As we see, skeptics have grounds for pessimism. It is possible that the resolution adopted on Thursday may be comprehended by the fate of its February predecessor. Not all is well with the "road map" to resolve the civil war in Syria. The corresponding resolution provides for a ceasefire, negotiations between the authorities and the opposition, the establishment of a transitional government, the beginning of the process of drafting a new constitution, and then holding presidential elections in Syria for 18 months.

At first glance, there seems to be a harmonious program for resolving civil conflict. In fact, a declaration of intent, because beyond the brackets of "unanimity" was the key question: who will become a party to the negotiations? The list of Syrian terrorist groups has remained uncoordinated. Experts number them a half dozen, diplomats of the western coalition recognize only two - "Islamic State" and "Dzhebhat an-Nusra."

In addition, the situation with the format of the negotiations is not clarified: will a single representative take the place of the opposition on them or will they drop off all this terrorist camarilla against the President Al-Assad of the Syrian Free Army? There is no agreement on the role of Bashar Al-Assad himself in the process of resolving civil conflict. It is naive to think that the special envoy of the UN Secretary-General, Staffan de Mistura, who is entrusted to start an intra-Syrian dialogue in January, will resolve all these contradictions.

The main word will say the military

Admittedly, diplomatic activity around Syria was provoked by the operation of the Russian Aerospace Forces, which ensured the offensive of the government army and its allies to the positions of terrorist groups. For two months, only ISIS lost the seventh part of the controlled territory, lost a significant part of its income, weapons and military equipment. Along with the success of the combined forces, the statements of politicians that the Syrian conflict has no solution other than the diplomatic one.

The Russian president adheres to a similar point of view, but clarifies: the operation of the Aerospace Forces will continue until the Syrian government army arrives. In other words, the time of diplomats will come when the military stops. So all conflicts end.

There are many examples on this subject in history. Take the same Syria. Almost half a century ago, Israel, during the six-day war, ousted from it the plateau of the Golan Heights of almost two thousand square kilometers. The Syrians protested, appealed to the world community, but the Knesset of Israel unilaterally proclaimed the sovereignty of the Jewish state over this territory. The UN Security Council by special resolution declared the annexation of the Golan Heights to be illegal. So the world lives, and Israel, as if nothing had happened, controls the disputed territory and even built dozens of Jewish settlements on it.

Similar examples can be found in Cyprus, Transcaucasia, the Pyrenees, the Balkans, the Indian subcontinent, the islands of Southeast Asia, the South Atlantic, and dozens more territories, which were given to the winners as military trophies. Syria is no exception. Its border will be marked where the government army and its allies will stop. They say that they plan to reach at least the Euphrates. Diplomats will only draw up the final of the protracted civil tragedy.

The fact that the Syrian crisis will not be solved at the negotiating table, confirmed the manipulation of Saudi Arabia. Represented by an active participant in the settlement process, invited to the Vienna and New York negotiations, this country has demonstrated that it is not satisfied with the peaceful resolution of the war in Syria and the revival of this state. The Saudis are still determined to destroy it. They hastily put together an Islamic coalition, whose task is to form a hundred-thousandth military contingent for operations in Iraq and Syria.

Experts believe that Saudi Arabia does not have enough strength to fight on two fronts - in Yemen and against Damascus. Nonetheless, it is assumed that non-citizens of the Saudi kingdom will fight. In the war in Yemen, Saudi Arabia bought thousands of mercenaries from Africa. This technique is quite applicable in Syria. No wonder that the basis of the Islamic coalition became the rich monarchies of the Gulf.

They have something to fight for. Tens of billions of dollars have been spent on the creation of Islamic terrorist groups. Now all of these an-nusry flee from Syria under the blows of the combined forces. The plans of the Arab monarchies are crumbling to saddle the Middle East. The contingent of the Islamic coalition will hardly change the situation. However, it is obvious that she is looking for her happiness not in diplomatic disputes, but in the use of military force.

The practice and vigorous assessments of the media have not stood the test, as if the resolutions of the Security Council brought the United States and Russia together in the fight against terrorist groups. On Monday, a cold shower spilled on the heads of optimists - the United States threw a new portion of anti-Russian sanctions onto the conference table. This is a payment for an independent line of Russia and an extra reason to be convinced: strong negotiating positions of Russian diplomats are impossible without successful actions in Syria of the Aerospace Forces of Russia and the troops united in our coalition.

Ctrl Enter
Noticed oshЫbku Highlight text and press. Ctrl + Enter
We are
Results of the week. “He was terribly unlucky, especially on Friday”The fall of the Syrian airbase Abu ad-Duhor. The longest siege of the civil war is over
Military Reviewin Yandex News
Military Reviewin Google News
11 comments
Information
Dear reader, to leave comments on the publication, you must to register.