One of the specialists who had previously worked for MTT put at the disposal of the author some materials of that time, including technical characteristics and diagrams in three projections, which to some extent make it possible to evaluate designs of aircraft like P.1106, P.1107 and P.1108 and some presumably still completely unknown projects. At the same time, it still remains unclear whether these MTT aircraft projects were fully developed or it happened after the surrender of Germany. For one such project, in addition to certain technical characteristics and diagrams, the three projections also contain a detailed longitudinal section, but its typical designation is missing.

As was to be expected in such cases, some of the published technical specifications contradict data from other sources that have been available so far. The reason for this in the first place were numerous current changes that influenced the geometric and technical parameters.

Project P.1106
The P.1106 project is a miniature interceptor fighter (overall dimensions smaller than that of the Non-162), designed as a high-wing aircraft with one jet engine, V-shaped tail assembly and the front landing gear. The pilot's seat was to be located far behind in the aft fuselage. This project should have contained the minimum number of structural elements and should have been easy to manufacture.

Carrier plane
The wing was supposed to be free-carrying, two-spar, trapezoidal shape without transverse V. The ailerons should have been located at 75% of the length of the wing. Discharged outboard fuel tanks should have been suspended closer to the wingtips.

Empennage
The tail of the V-shaped should consist of the keels and rudders, which should have been placed trimmers, and tips.

Power point
The power plant was to consist of a jet engine of unknown type.

weaponry
On the submitted drawings, weapons are not defined. 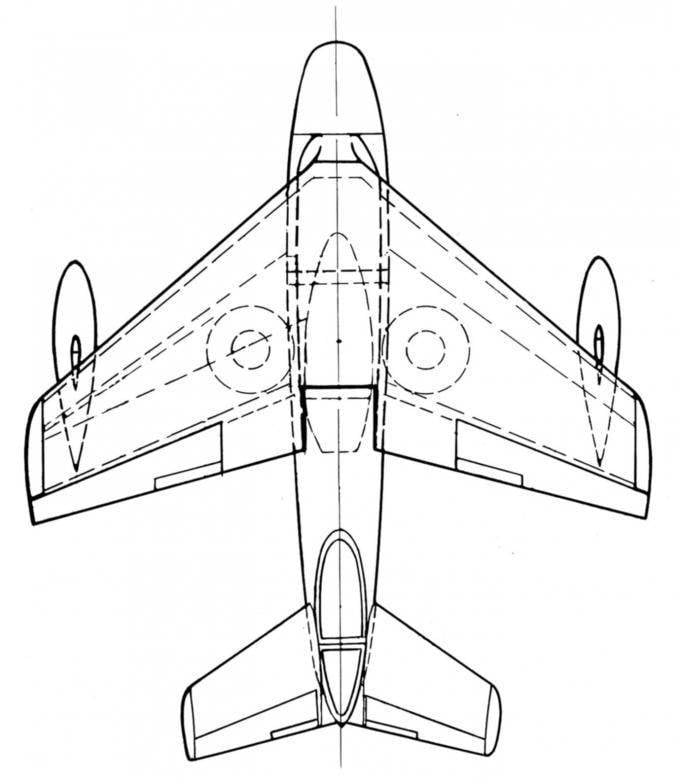 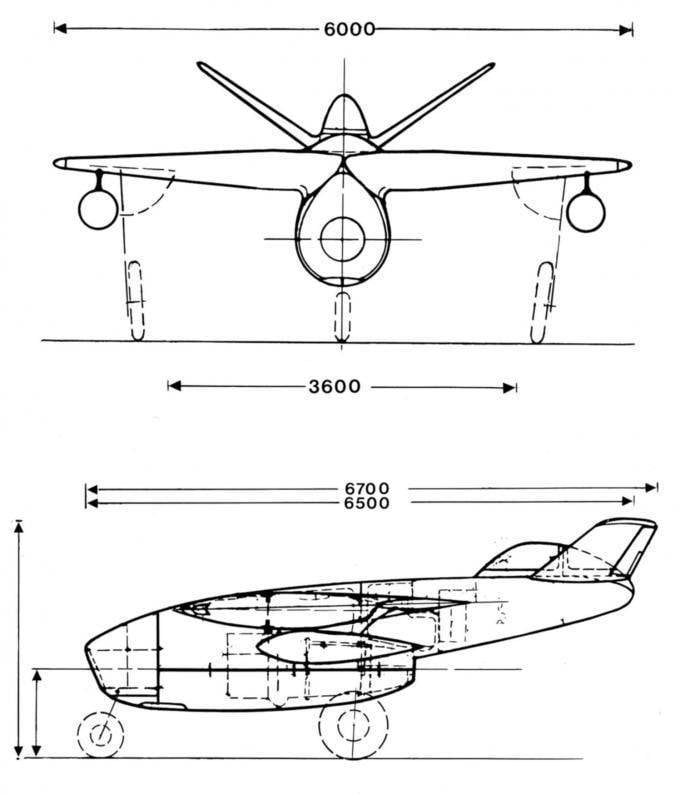 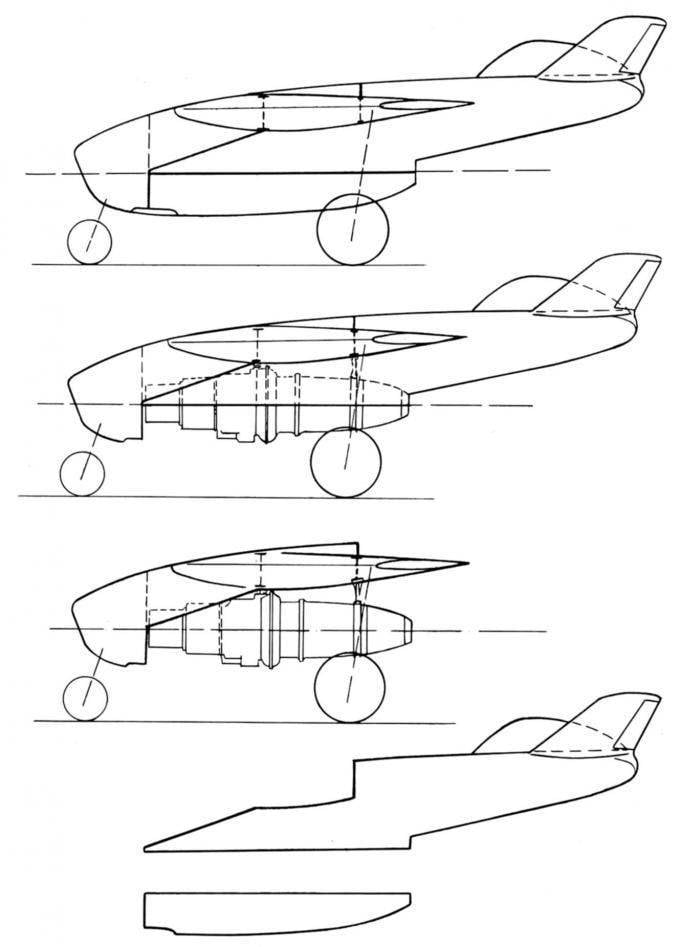 Figure 2 (illustration of the “main structural units and their joints”) shows the simplicity of the design of the aircraft and the ease of its maintenance.

Project P.1108
R.1108 was a long-range bomber project with four jet engines. This was supposed to be a flying-wing mid-flight. The wing should have a large sweep angle. The front landing gear had to retract in the backward direction. The main landing gear had to be removed in the direction back at an angle to the outer sections of the bearing planes.

The power plant of the four engines was to be placed in the wing of two turbofan engines in each console. The fuselage is made as a unit with the wing. In one of the first options, the air to the engines of the power plant recessed into the bearing planes was to be led through the air intakes located above the wing. In the second version, both the power unit and its air intakes were to be located under the wing. It is interesting to note that this project, at about the height of the air intakes of the power plant, on the upper surface of the wing provided for the installation of suction boundary layer slots (Absaugeschlitz). Fuel tanks were to be placed in the fuselage and in the wing.

If we carefully examine the rather detailed schemes made in three projections, then we can see the absence of any tail. 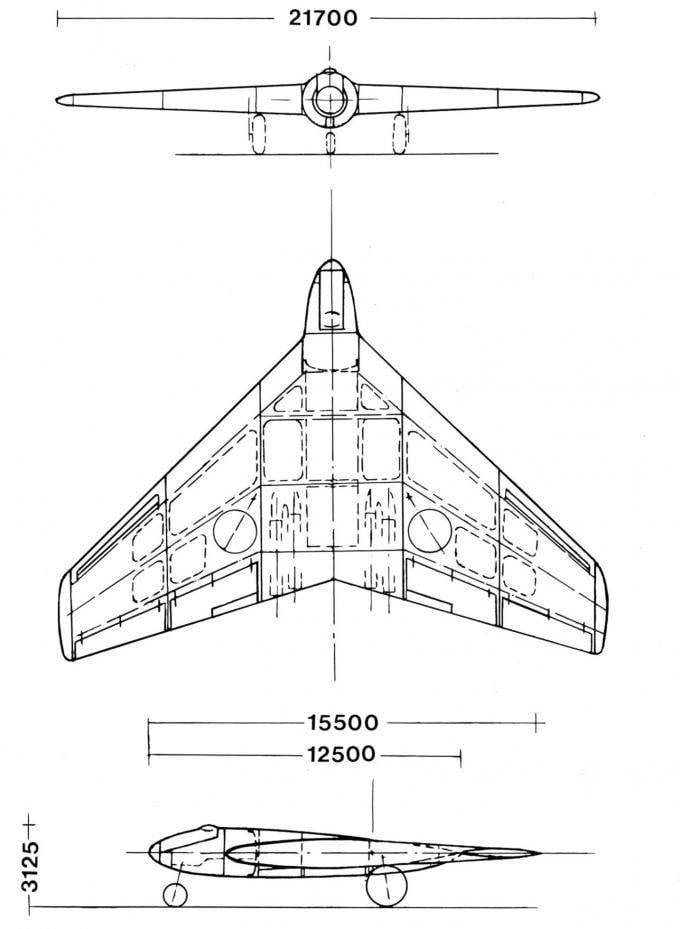 Other flight technical data of this and subsequent projects, which will also be discussed in this material, are located in the “Project Overview” table.

The P.1108 project had another version, which, in contrast to the first, received a very small tail. Also, unlike the first version of this project, the second version was supposed to have significant changes, which also related to technical parameters:

Fig.4 Two different types of air intakes in the project of a long-range bomber with four P.1108 jet engines: in version I, the air intakes of the power plant are located above the bearing planes; 1 scale: 100

Project P.1107
Early drawings and some technical specifications of this long-range bomber project, equipped with four turbojet engines, have already been published in another edition, and as in the case of P.1108 they deviate significantly from the table at the end of the article.

The project of a twin-engine Schwalbe fighter-bomber
In this project, made under the "flying wing" scheme, the engines of the power plant should have been located above and below the wing. Pilot cabin should be located between the upper air intakes of the power plant. Under the cab there should be a compartment in which the landing gear should be placed in the retracted position. The main landing gear had to be removed in the forward direction at an angle to the longitudinal plane of the aircraft. The ailerons and elevators were to be connected to the wing with the help of hinges; the fuel was to be located in the fuel tanks and in the wings in the fuselage and in the wings. 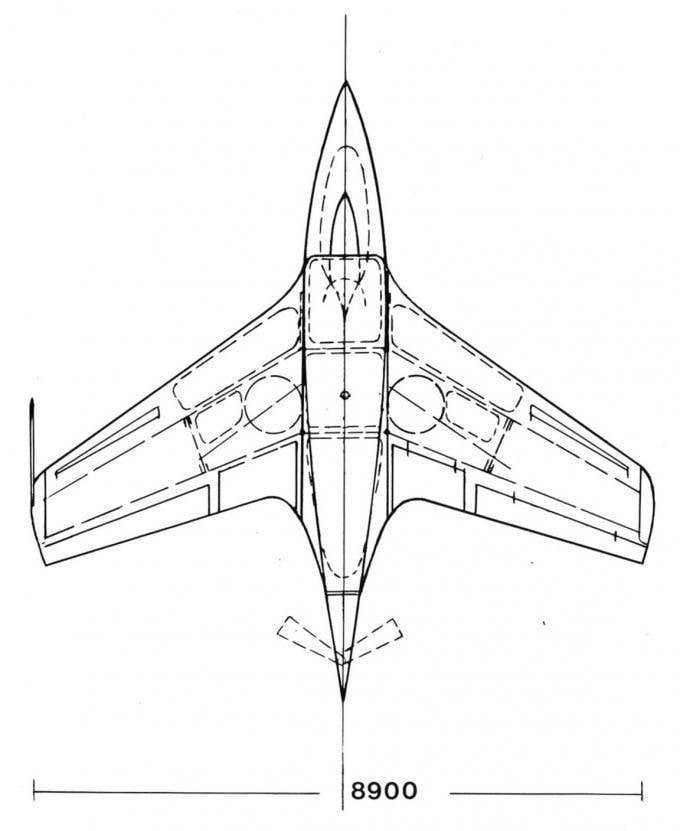 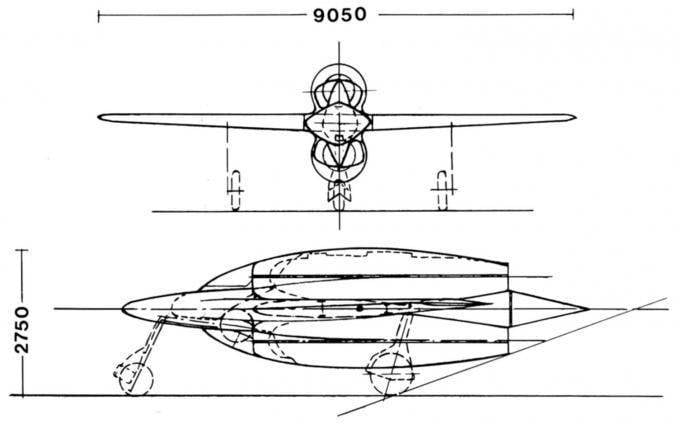 Fig.5 Schemes in three projections of the project of the twin-engine heavy fighter "Schwalbe". 1 scale: 100

What at first glance resembles a reverse, supposedly should have been either a brake flap or flap, which was intended for maneuvering during air combat.

Single-engine jet fighter "Wespe"
This mid-plane was represented by two variants with so many significantly different versions that they look more like two different projects.

This project was inherent in the wing with a large angle of sweep, which was a single unit with the fuselage, and the rear elongated part of the fuselage with a V-shaped tail.

Option II (“Ausführung II”) was supposed to get swept high keel and stabilizer. In this way, this option was significantly different from option I. Presumably, the carrying planes of both projects should have been identical. 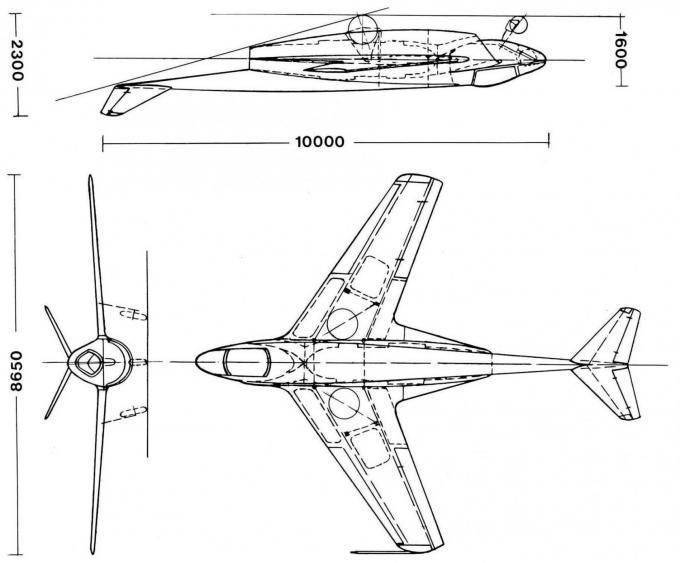 Fig.6 The project of single-engine fighter "Wespe". Scale 1: 100. The lower side view is a version that received the designation "Ausführung II"

Much more interesting was the project of the light fighter "Libelle"

The project of the light fighter "Libelle"
A single-seat fighter with a short egg-shaped fuselage, which should accommodate the pilot, power plant and a rather narrow chassis with a nose strut. The crescent-shaped form of the wing was an idea that first appeared on the same mid-plane of the Arado company. To improve the stability of the aircraft when flying at low speeds, the outer wing sections should have received slats. V-shaped tail assembly was to be far behind the fuselage itself. The tail unit should have been connected to the fuselage using a tubular section. Above all, this aircraft, with its wing span of 7 meters and the entire length of the 7,3 meter, should have been smaller in size than the well-known Non 162. 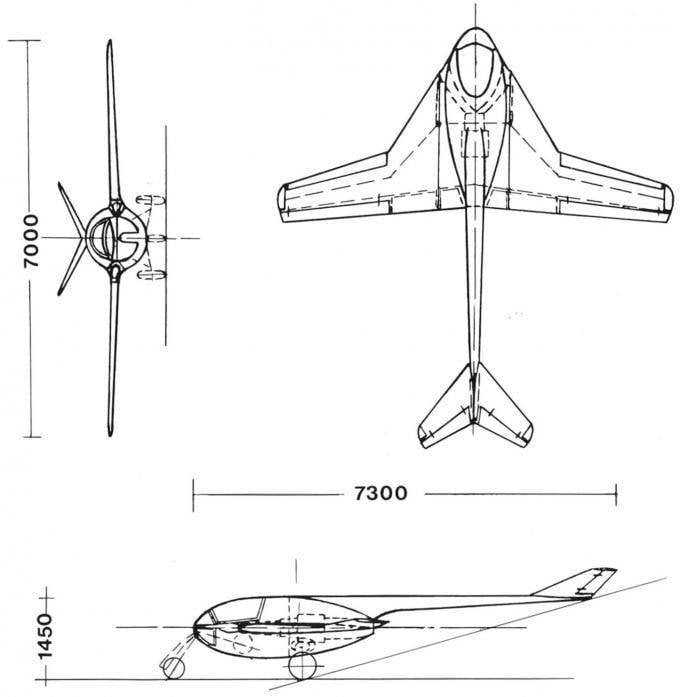 Fig.7 Schemes in three projections of the project of the Libelle light fighter. 1 scale: 100

Bomber-transport aircraft "Wildgans"
A six-engine jet aircraft with a take-off weight of 50 tons outwardly appears massive and in terms of form is nothing interesting. And here the air intakes of the power plant were to be located next to the cockpit. The exact location of the six engines is shown only in the side view. The front landing gear had to retract into the fuselage in the backward direction, the main landing gear had to retract in the direction back to the fuselage in the wing.

V-tail looked too small and flat. It is unlikely that such a tail could be sufficient for such an aircraft. Interesting in this project is the wing with an increased (dashed line) span. 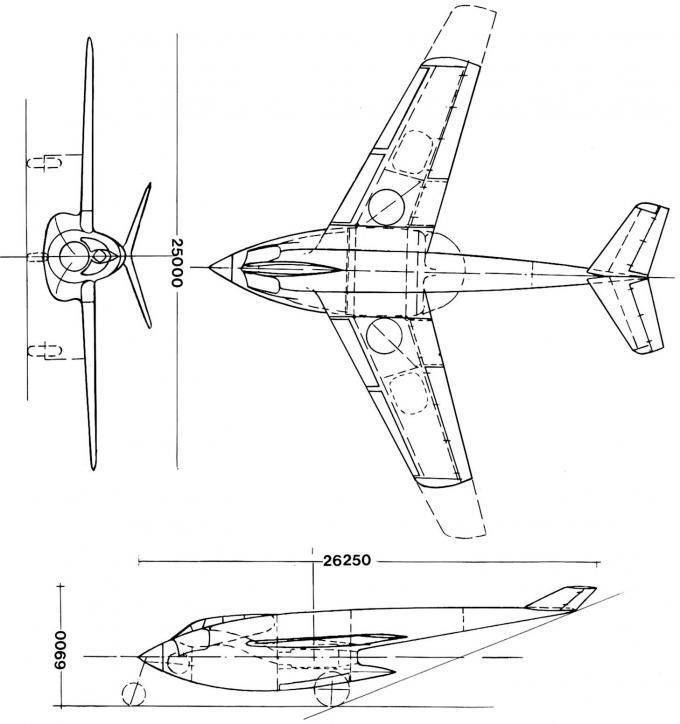 Fig.8 Schemes in three projections of the project of the six-engine bomber-transport aircraft "Wildgans" with a take-off weight of 50 tons. 1 scale: 250

The project of a heavy fighter with a T-shaped tail
The type designation of this vysokoplan unknown. With its shape, this aircraft resembles other MTT projects, for example P.1112. The design of a heavy fighter was supposed to have two guns mounted in the fuselage, as can be seen in the longitudinal section. This detailed drawing suggests that this project was quite thoroughly worked out. 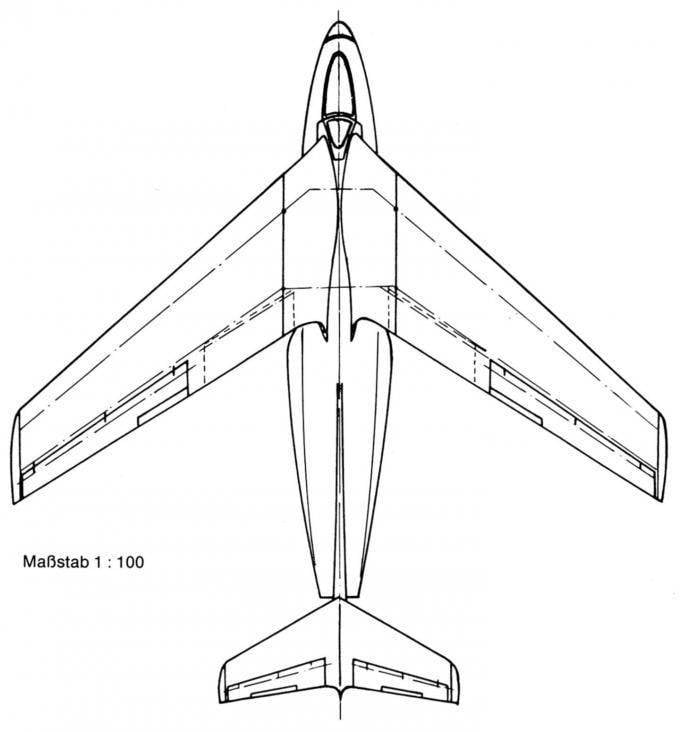 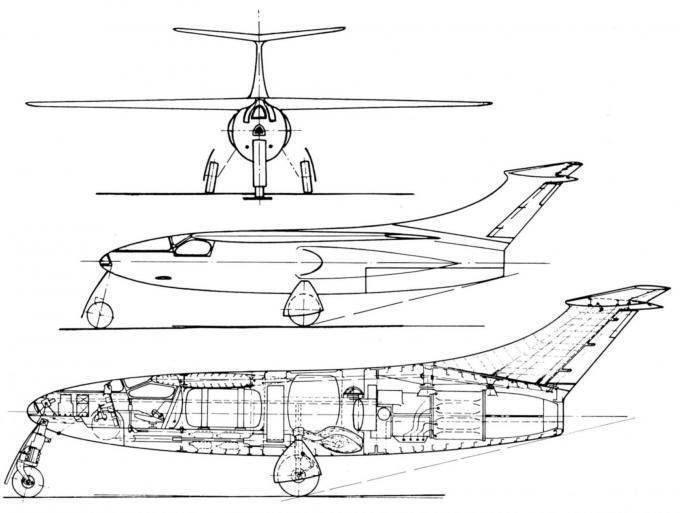 Fig.9 Schemes in three projections of the project of a heavy fighter with a T-shaped tail assembly (no typical designation) 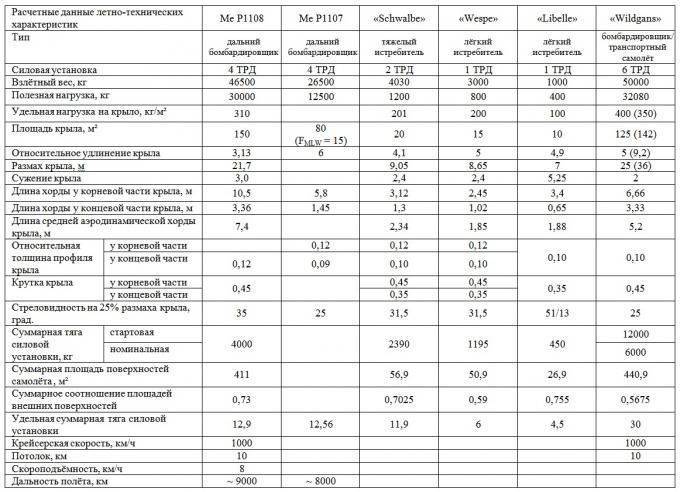 Notes to the table

1 For aircraft projects of the types “Schwalbe”, “Wespe” and “Libelle”, the specified weight loads are not related to the military, but to special versions of the aircraft data
2 Workload - the weight of all the loads that are needed to complete a task. It includes the materials consumed in the course of the assignment and other loads related to various materials, which are also used during the flight. Minimum amount of lubricating fluid, coolant, fuel, brake fluid, and servo-controlled oil systems.
Service load - the weight of the crew and the equipment removed after the assignment.
The load consumed during the flight is the weight of the materials consumed during the flight (fuels and lubricants)