Project "ZZ". Will Putin be the prime minister of Britain?

December 23 2015
127
Jeb Bush is angry with everything: Putin’s popularity, his own low election rating, favoritism of rival D. Trump. He said that the United States is losing influence in the world, and the “bully Putin”, on the contrary, is gaining influence. As for influence, the truth is true: it turned out that almost 80% of Britons want to see Putin as the next prime minister of the United Kingdom. German analysts say that Putin has practically become a symbol of Russia. And only a lonely figure of the Russian-speaking writer Sorokin announces that "this country" does not have a "normal future." And they have to, they say, drink Russian vodka and swear ... 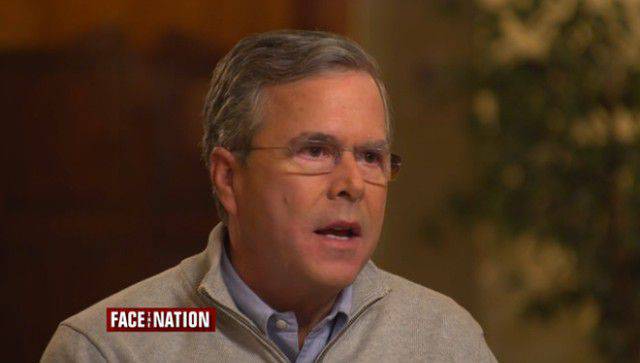 Jeb Bush on Face to the Nation (CBS News)

Jeb Bush, a potential US presidential candidate, spoke at CBS News "Face to the nation".

The former governor is only in fifth place in the Republican election race. But he has not yet lost hope: he is going to issue a “campaign” and “show” who he is.

The number one goal for Bush is, of course, the successful businessman and election candidate Donald Trump. Finding no more convincing arguments, Bush called Trump a “frivolous candidate,” and then added that Trump is a “frivolous person.”

Apparently, his own speech seemed unconvincing to him. And then the politician criticized the billionaire for his praise of Russian President Vladimir Putin.

“We [the US] are losing influence all over the world, and Putin is gaining influence. He is not an ally. He is a dictator. He’s a bully, ”Bush said.

Jeb knows which president the United States needs: this man would stand up for America’s interests everywhere — in Europe and the Middle East. Building a "better relationship with Putin" is no good. You can't say that Putin is “a great guy,” said Bush. “He is not like that at all. He's killing journalists. ”

Trump had something to protest Bush.

Speaking at "ABC", he ridiculed the "accusations" against Putin concerning the "murder of journalists."

“The truth is, well, about Putin,” Trump said, “you are saying that he was killing people. However, I did not see it. Can you prove it? ”

Next, Trump called Putin a “highly respected” person. And he recalled the presumption of innocence: “No one has ever proved that he [Putin] killed someone. You are considered innocent until proven guilty. At least that's the way it is in our country [USA]. ”

In the meantime, the British public wanted to change the prime minister. Cameron Englishmen have long disliked. In the new premiere tipped ... Putin. 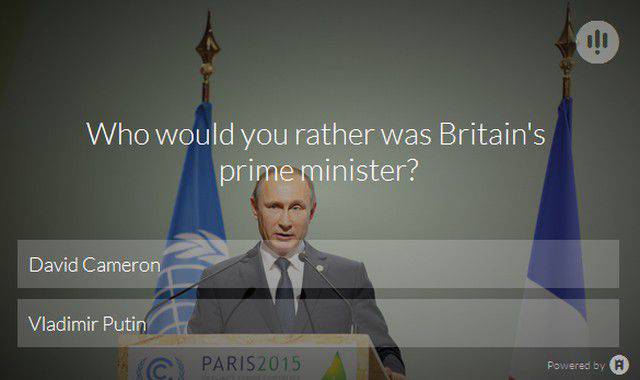 According to the newspaper "Express", 4 from 5 residents of the United Kingdom would prefer to see the leaders of Great Britain as the Russian president, and not at all David Cameron.

"The strong personality of the former KGB officer," the newspaper notes, is very attractive to the British. Almost eighty percent of readers of Express.co.uk are ready to entrust Putin with “governing the country”.

Answering the question “Who would you rather see as the Prime Minister of Great Britain?”, 78% of respondents named Vladimir Putin. The remaining 22 percentages cast votes to Mr. Cameron.

A thousand people were interviewed.

By the way, more than 70% of readers supported Putin's airstrikes on the positions of "IG" in Syria.

Putin’s popularity has grown greatly in recent months, the newspaper notes. But Cameron’s approval rating has been going down in Britain for more than a month. Apparently, he “does poorly” his work.

Putin’s popularity is high in Russia, the newspaper writes. Russians like the "annexation of the Crimea" and "air strikes in Syria."

The Moscow correspondent of the publication Stefan Scholl writes that Putin has a very high rating in Russia, despite the economic crisis. Putin is still popular. According to the most recent VCIOM survey, 88% of the population support its policies. A huge indicator; he is taller than ever, notes German. An increase in the retirement age, and an increase in taxes, and the inability to fly to Turkey for tourists - all this did not change anything. "The laws of nature have no authority over Putin," said Valery Fedorov, Director General of VTsIOM.

The journalist believes that the head of state has become a “role model”, a “political and moral superstar,” and there is simply no “alternative” to him. And everyone is sure that he is being re-elected in 2018.

On TV, on the radio in Russia they praise Putin. Yes, this is propaganda. And nevertheless ... In television studios they talk about "a feeling of love for Vladimir Vladimirovich, our leader." Guests of the programs, young entrepreneurs, writers, regional deputies and spectators all explain in chorus “why they love Putin,” and not only love, but “worship” him and even “idolize” him. The speakers and the audience alternately assure each other that "Putin raised Russia." And the trends have reached the West: the opinion that “such a person is born once in a hundred years” becomes popular here.

Other figures in Russia, continues the journalist, like actor Ivan Okhlobystina, generally state that the time has come to rewrite the Constitution of the Russian Federation and make Vladimir Putin a monarch. Others say that it is time to manufacture the “imperial crown” for Putin. The request of “numerous Orthodox believers” (auf Bitten zahlreicher orthodoxer Gläubigen) about the “accelerated canonization of Putin” (müsse man Putin im Eilverfahren heilig sprechen) for the “titanic forces” with which he “protects the house of God” (die titanischen Kräfte, mit der er die Heimat schützt, von Gott erhält).

In another German newspaper, "Tageszeitung", published an interview taken from the Russian-speaking writer Vladimir Sorokin. The aforementioned Sorokin spoke about the Russians and Putin about something special. According to him, the Russians drink vodka, swear, but there is no normal future for this country.

As this writer stated, for Russians, vodka is like “armor”; it shelters people from “harsh everyday life” and from “the state”. Sorokin, a well-known free syllable, believes that Russians are materns: swears are “important” for them, because “this is the language of the people,” a language that the state cannot influence. This kind of "doping" of the Russian people, the same as vodka, the interviewee believes. “Vodka and mate are the dope of the Russian people,” he told the Tageszeitung.

According to Sorokin, “state space” in Russia is “a hostile sphere”. In Germany, everything is different. Sorokin has an apartment in Charlottenburg (a district in Berlin), and there, as he observes, the border between the citizen and the state "is not felt." The apartment was bought three years ago, Sorokin prefers to spend more time in it than in the Russian house, and assures the public that in Berlin on the street he does not have a feeling of fear. If in Russia “a person serves the state”, then in Germany the opposite is true: there “the state serves a person”. The writer does not like Moscow, believing that “too little of humanity” has remained in it.

Sorokin is convinced that a difficult economic crisis is brewing in Russia. According to him, the Russians "are beginning to understand that there will be no better." “People understand that this country has no normal future,” summed up the writer. No, because "Putin does not know the solution."

So, opinions are divided. Some observers and big businessmen (for example, D. Trump, a potential US presidential candidate), as well as the general British public, consider Putin to be the star of world politics and even suggest making him a British prime minister. Judging by a poll by the newspaper Express, almost eighty percent of Britons want to throw off Cameron and put Putin in power. The Russians, however, will not give up their president. This is evidenced by his rating: according to the latest VTsIOM survey, 88% of citizens of the Russian Federation are satisfied with Putin.

One of the dissatisfied who did not fit into 88% is the writer V. Sorokin. He believes that “this country [Russia] does not have a normal future” and that the Russians are “booked” from the state through a special “doping”. “Vodka and mate are the dope of the Russian people,” says Sorokin, predicting “disintegration” of Russia.