Russian "Blue" against the American "Trident" 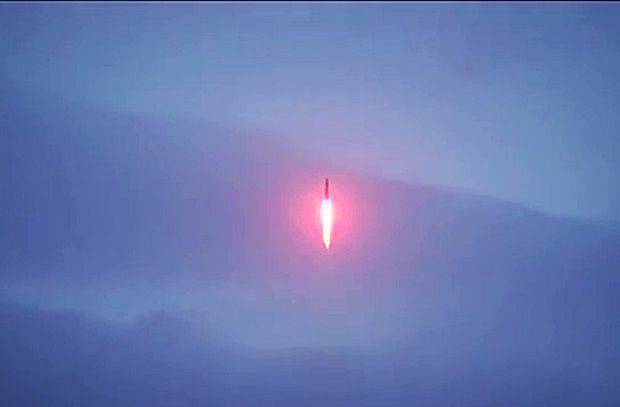 Underwater-based Sinev ballistic missile surpasses the American equivalent Trident-2 in a number of characteristics
The successful, already 27, December launch of the 12 December of the Sineva ballistic missile from the atomic strategic missile cruiser Verkhoturye confirmed: Russia has weapon retaliation. The rocket overcame about 6 thousands of kilometers and struck a conventional goal at the Kamchatka Kura range. By the way, the Verkhoturie submarine is a deeply modernized version of the atomic submarines of the Delphin-class 667BDRM project (Delta-IV according to NATO classification), which today form the basis of the strategic nuclear deterrent naval forces.

For those who jealously monitor the state of our defensive capabilities, this is not the first and rather familiar message about successful launches of the Blue. In the current rather alarming international situation, many are interested in the issue of the capabilities of our missile in comparison with the closest foreign counterpart - the American UGM-133A Trident-II D5 (Trident-2) missile, and the Trident-2 is in use.

The R-29RMU2 “Sineva” missile is intended for hitting strategic enemy targets at intercontinental distances. It is the main armament of strategic missile cruisers of the 667BDRM project and is based on the R-29РМ ICBM. According to NATO classification - SS-N-23 Skiff, under the START Treaty - PCM-54. It is a three-stage liquid three-stage intercontinental ballistic missile (ICBM) of a third-generation submarine-based submarine. After being put into service in the 2007 year, it was planned to launch about 100 Sinev missiles.

The maximum deviation from the target when starting from depth to 55 m does not exceed 500 m, which is ensured by an efficient onboard control system using astrocorrection and satellite navigation. To overcome the enemy's missile defense, Sinev can be equipped with special means and use a flat flight trajectory.

These are the basic data of the Sineva ICBM, known from open sources. For comparison, we present the main characteristics of the American Trident-2 rocket, which is the closest analogue of the Russian “underwater” sword. 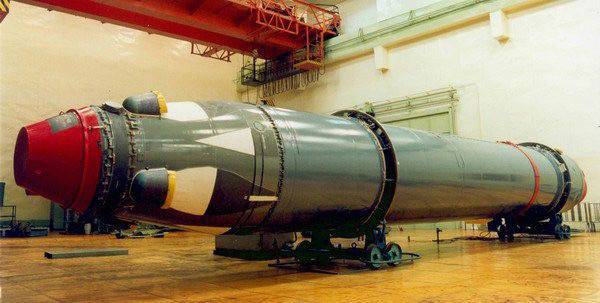 The solid-fuel intercontinental ballistic missile of a sea submarine-based "Trident-2" was put into service in the 1990 year. It has a lighter modification - "Trident-1" - and is designed to hit strategic targets in the territory of the enemy; Solved problems are similar to the Russian "Blue". Missile equipped with American submarines SSBN-726 class "Ohio". In 2007, its mass production was discontinued.

With a starting mass of 59 tons of ICBMs, the Trident-2 is capable of delivering payloads weighing 2,8 tons to remove 7800 km from the launch site. The maximum range in 11 300 km can be achieved by reducing the weight and the number of warheads. As a payload, the rocket can carry 8 and 14 warheads of individual guidance of medium (W88, 475 kt) and low (W76, 100 kt) power, respectively. The circular deviation of these blocks from the target is 90 – 120 m.

Comparison of the characteristics of missiles "Sinev" and "Trident-2"

On the whole, Sinev is not inferior in its main characteristics, and in some cases surpasses the American ICBM Trident-2. At the same time, our rocket, in contrast to the overseas counterpart, has great potential for modernization. In 2011, a new version of the rocket, the R-2014HRMU29 Liner, was tested and adopted in 2.1. In addition, the P-29RMU3 modification, if necessary, can replace the solid-fuel ICBM Bulava.

Our “Sineva” is the best in the world in terms of energy-mass perfection (the ratio of the mass of a combat load to the starting mass of a rocket, reduced to a single flight range). This indicator in 46 units significantly exceeds the similar indicator of ICBM "Trident-1" (33) and "Trident-2" (37,5), which directly affects the maximum flight range.

Sineva, launched in October 2008 from the submarine nuclear submarine “Tula” from the Barents Sea, flew 11 547 km and delivered the model of the head part to the equatorial part of the Pacific Ocean. This is 200 km more than the Trident-2. Such a reserve range has not one rocket in the world.

In fact, Russian strategic missile submarine cruisers are capable of firing at the central states of the United States from positions directly off their coast under the protection of a surface fleet. You can say without leaving the pier. But there are examples of how an underwater missile carrier carried out a secretive, “under-ice” launch of the Sineva from the Arctic latitudes with an ice thickness of up to two meters in the region of the North Pole.

The Russian intercontinental ballistic missile can be launched by a carrier that moves at a speed of up to five knots, from depth to 55 m and waves of the sea to 7 points in any direction along the course of the ship. ICBM "Trident-2" with the same speed of movement of the carrier can be run from depth to 30 m and excitement to 6 points. It is also important that immediately after the start, Sineva steadily goes on a predetermined trajectory, which Trident cannot boast of. This is due to the fact that the Trident starts at the expense of the accumulator of pressure, and the submarine commander, thinking about safety, will always make a choice between an underwater or surface launch.

An important indicator for such weapons is the rate of fire and the possibility of salvo firing during the preparation and conduct of a retaliatory strike. This greatly increases the likelihood of an enemy's missile defense system breaking through and inflicting a guaranteed defeat. With a maximum start-up interval between the Sineva ICBM and 10 seconds, this indicator in the Trident-2 is twice (20 s) more. And in August 1991 of the year, a salvo launch of ammunition from 16 ICBM "Sineva" by the Novomoskovsk submarine was made, which so far has no analogues in the world.

Our Sinev is not inferior to the American rocket and is exactly hitting a target when equipped with a new medium power unit. It can also be used in a non-nuclear conflict with a high-precision high-explosive fragmentation warhead weighing about 2 tons. To overcome the enemy's missile defense system, in addition to special equipment, Sineva can fly to the target and follow a flat trajectory. This greatly reduces the likelihood of its timely detection, and hence the likely damage.

And one more important factor in our time. With all its positive indicators of Trident type ICBMs, we repeat, it is difficult to modernize. For more than 25-year service life, the electronic database has changed significantly, which does not allow for the local modernization of modern systems in rocket design at the software and hardware level.

Finally, another plus of our “Sinevy” is the possibility of its use for peaceful purposes. At one time, the carriers "Wave" and "Calm" were created for launching spacecraft into low near-earth orbit. In 1991 – 1993, three such launches were carried out, and the conversion “Sineva” hit the Guinness Book of Records as the fastest “mail”. In June, 1995-th this rocket at a distance of 9000 km, to Kamchatka, delivered a set of scientific equipment and mail correspondence in a special capsule.

As a result: the above and other indicators became the basis for the German specialists to consider “Sinev” a masterpiece of maritime rocket production.

Ctrl Enter
Noticed oshЫbku Highlight text and press. Ctrl + Enter
We are
Missile attack on Europe: myth or reality?Transportation and loading into the mine of an intercontinental ballistic missile of the 5 generation rocket complex RT-2PM2 Topol-M
Military Reviewin Yandex News
Military Reviewin Google News
81 comment
Information
Dear reader, to leave comments on the publication, you must sign in.