December 29 2015
3
The construction of several types of armored vehicles based on a common chassis allows you to solve a number of important problems associated with their production and operation. Nevertheless, these projects with a maximum degree of unification are far from always successful and lead to the rearmament of troops. So, at the final stage of World War II, the American command began several projects to develop promising armored vehicles for various purposes based on the latest light tank M24 Chaffee. The family, which received the Light Combat Team symbol, planned to include military vehicles for various purposes, including a self-propelled mortar, which, however, did not reach serial production, remaining in a single copy.


It should be noted that the project of a self-propelled mortar based on the Chaffee tank was not the first such development, created in the mid-forties. With the 1942-43, attempts have been made to create a similar combat vehicle on the chassis of existing medium tanks, etc. technology, however, due to certain reasons, they were not crowned with success. For example, until the end of 1944, work continued on the T27 and T29 projects, which were eventually closed due to a host of problems of a different nature. However, the troops still needed a self-propelled mortar, resulting in an order to start a new project. 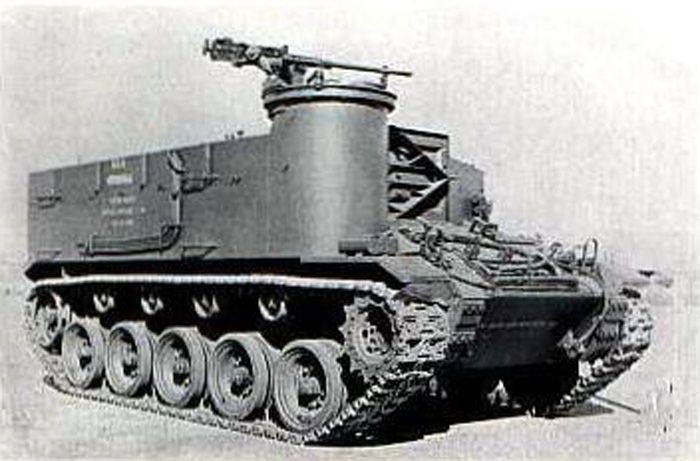 In accordance with the technical task of May 1945, the company had to use the chassis of the auxiliary machine T13 and mount an 4,2 caliber inch mortar on it. This version of the armored car was named T35. Soon there was a proposal to use the promising T16 chassis that was being developed at that time, as a result of which the T35 project was reworked accordingly. Nevertheless, the development of the T16 machine was delayed and the exact timing of the appearance of the finished tracked chassis was questionable. 13 September of the same year, an order was signed to begin the development of a T38 self-propelled mortar based on the M37 HMC ACS, already launched into the series. A few weeks later the project T35 was closed as unnecessary.

The development of the new T38 project was entrusted to the York Safe and Lock Company (York, Pennsylvania). In the framework of the new project, the developer had to change the design of the base self-propelled howitzer in order to install the required mortar. In this case, it was necessary to submit a set of special equipment, by installing which the base ACS could “turn” into a self-propelled mortar. A characteristic feature of the T38 project, launched after the end of World War II, was the extremely slow pace of implementation. It took several years to develop a project based on finished equipment. Documentation for the construction of the first prototype was transferred to the Detroit arsenal only in the fall of 1948. 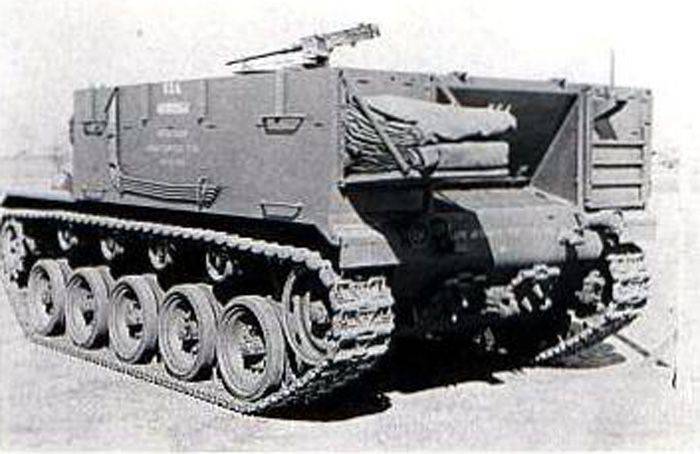 As the base for the T38 self-propelled mortar, the existing ACN M37 armed with an 105-mm howitzer was taken. During the development of the project, it was decided to remove a number of special equipment from the base machine and install new units in the fighting compartment. At the same time, the chassis design underwent minimal changes associated exclusively with the installation of new weapons. The layout of the machine, power plant, transmission, etc. Borrowed from the basic project without modifications.

The M37 Howitzer Motor Carriage self-propelled gun mount was based on a modified M24 Chaffee light tank chassis. She retained the overall layout of the tank, but differed in the location and size of the fighting compartment. Like most American armored vehicles of the time, the M37 chassis had a transmission compartment in front of the hull, behind which was located the control compartment with the seats of the driver and his assistant. Behind the department of management there was a large fighting compartment, made in the form of an open-top armored cabin. In the aft cabin there was a casing inside which the engine, radiator and elements of the fuel system were installed. The engine and transmission were connected by means of a cardan shaft passing through the fighting compartment.

The M37 SAU hull was welded from a set of armor plates up to 12,7 mm thick, which provided protection against small-arms bullets. weapons and artillery shell fragments. Its frontal part consisted of three sloping sheets, behind which the frontal leaf was located. The cabin itself was made of several sheets and occupied the entire middle and aft parts of the hull, covering the crew from all sides. In the front right part of the cabin there was a cylindrical unit with a workplace assistant driver and a ring turret for a machine gun. 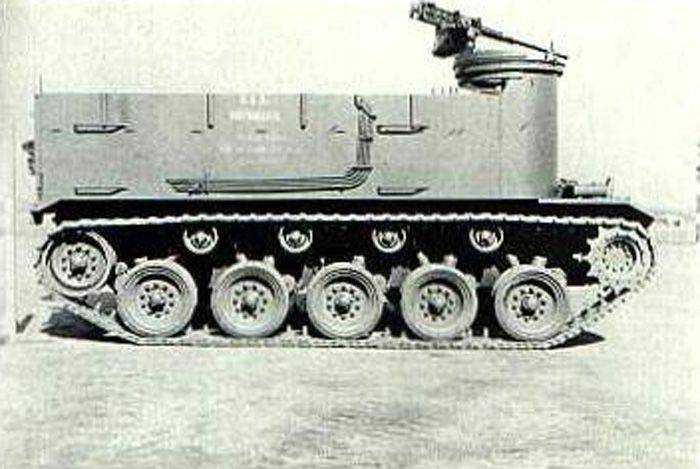 In the aft compartment of the hull were two Cadillac 44T24 petrol engines with 110 horsepower each, connected to the forward transmission compartment with a propeller shaft. Manual transmission ensured the rotation of the front drive wheels. The chassis had five pairs of road wheels with a torsion bar suspension and additional shock absorbers on the two front and two rear pairs. To simplify the production of technology, the undercarriage was borrowed from the base tank without any changes.

The T38 project involved dismantling the M105 4-mm howitzer with the M5 installation, thereby releasing a large enough volume in front of the deckhouse. In addition, the mask was dismantled guns in the front sheet. The resulting window was proposed to close the curved armor plate with a thickness of 12,7 mm. In addition, it provided an attachment for a rectangular base plate of the new mortar. If necessary, firing from the ground plate should be removed and used for its intended purpose. In the transport position, it had to slightly increase the level of frontal projection protection.

In the central part of the combat compartment of the new machine, it was proposed to mount a special installation for the M2 mortar of the 4,2 caliber of inch (107 mm). The main element of this installation was a turntable with vertical guidance mechanisms. The mortar mounted on it could be guided in a horizontal plane within 90 ° from the axis of the machine and fixed in several predetermined positions. The manual screw design allowed vertical guidance ranging from + 45 ° to + 60 °. 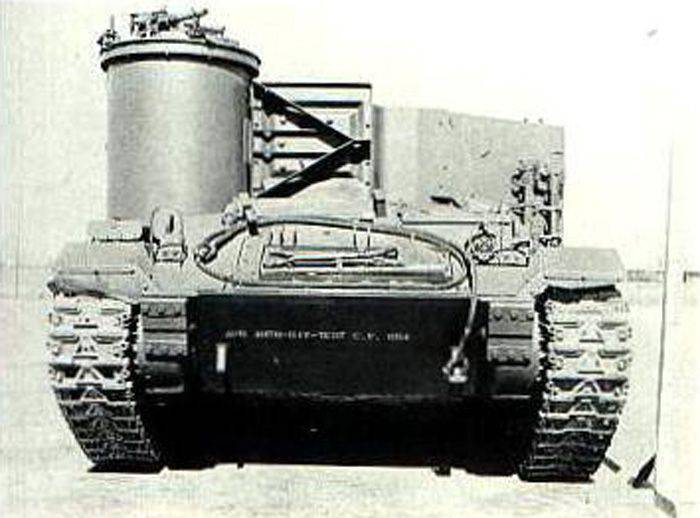 The M2 mortar had a rifled 107 mm caliber barrel and was charged from the barrel. The propellant charge was ignited by samokol. The mortar calculation could fire at a rate of up to 5 rounds per minute for some time after the start of shooting. With a long shooting rate significantly decreased.

For use as part of the armament of the T38, the M2 mortar did not undergo any changes, thereby maintaining the possibility of firing not only when mounted on the chassis, but also from the ground. In the latter case, the mortar should be dismantled from the installation of the fighting compartment, and also removed the base plate from the frontal part of the cabin. Next, the mortar fell to the ground and collected in the original wearable configuration.

The basic self-propelled gun M37 HMC had racks for ammunition located along the sides of the wheelhouse. When reworked at T38, such ammunition transportation devices remained, but were slightly modified for transporting mortar shells. Available free volumes allowed to bring the portable ammunition to 140 min. 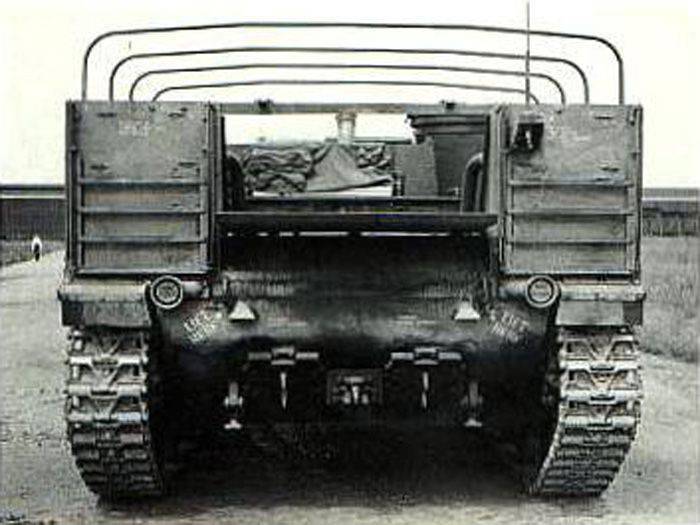 Stern T38. On the body there are arches for an awning, aft door is open

The range of M2 mortar ammunition included 107-mm mines of several types: high-explosive, smoke and chemical mines. Ammunition weighing from 11,1 to 13 kg, depending on the type of propellant charge, had an initial speed of up to 250 m / s and could fly to a distance of 4-4,4 km. The primary ammunition was considered to be the M3 high-explosive fragmentation mine with an explosive charge of 3,64 weight, which provided it with an intermediate position between 105 and 155 caliber artillery shells.

As additional weapons to protect against infantry or aviation the enemy’s self-propelled mortar T38 was supposed to use a heavy machine gun M2HB. This weapon was mounted on the T107 installation, located on the "tower" of the assistant driver. Also allowed the use of personal weapons of the crew, consisting of carbines and submachine guns.

According to the project, the crew of a promising self-propelled gun was to consist of six people. The driver and his assistant were located in their seats in front of the case. The remaining four controlled weapons and placed in their places in the wheelhouse. 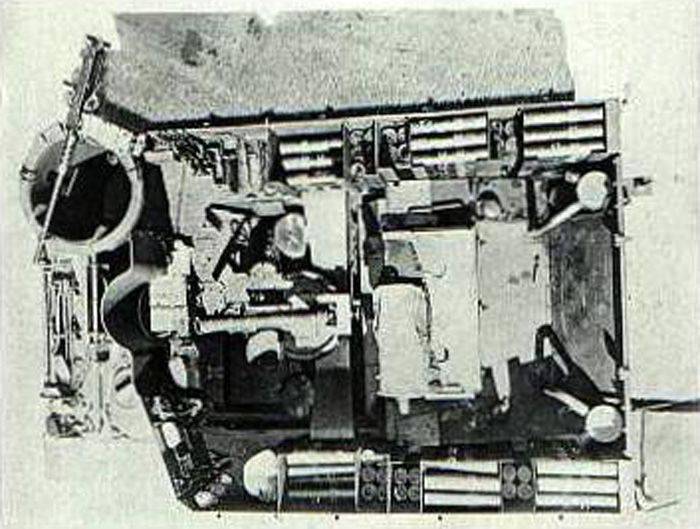 View of the car on top. Clearly visible layout cutting

Due to the absence of major changes in the design of the chassis, hull, etc. T38 self-propelled mortar and M37 base artillery mount had similar dimensions. The length of the prospective machine was 5,5 m, width 3 m and height (on an anti-aircraft machine gun) - 2,84 m. The refusal of a large and heavy howitzer and the installation of a relatively light mortar with guidance mechanisms led to a reduction in combat mass. In the case of T38, this parameter was equal to 17,5 t versus 21 t in the base M37.

In the autumn of 1948, York Safe and Lock handed over to the Detroit arsenal a set of documentation for building a prototype of a new combat vehicle. As a basis for an experienced armored vehicle, the M37 GMC serial self-propelled gun, built in the 1945 year, was taken. With this ACS they removed the gun and its installation, and also removed the sights and other units used with the original howitzer. The hole in the front plate was closed with a half-inch armor plate, and in the fighting compartment installed mechanisms for securing and pointing the mortar M2.

It didn't take long to make a prototype T38 mortar. Already in December, 1948, he was sent to the Aberdeen Proving Ground. Over the next few months, the test site specialists were checking the new combat vehicle, identifying its strengths and weaknesses. Any information on the detection of serious design flaws are missing. However, this was not a reason for optimistic estimates. 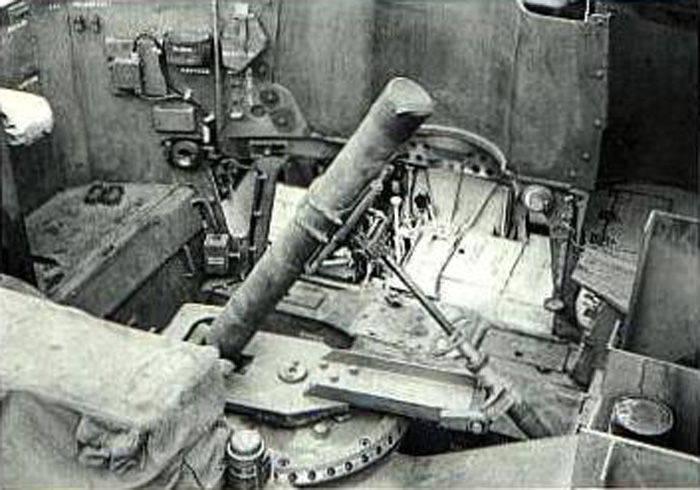 In April, the first prototype of the T49 was sent to Fort Benning base for further tests in April. The main task was to determine the combat qualities of self-propelled mortars and their prospects from the point of view of use in armed conflicts. However, these tests did not take place. For some reason, the command decided to stop the development of the project T38 and close it. The only prototype of such a combat vehicle, converted from a serial self-propelled gun, was later used in tests of other military equipment based on the M38 ACS.

The exact reasons for the refusal to further develop the T38 self-propelled mortar are unknown. Given the further development of American self-propelled artillery systems, it can be assumed that the T38 project was closed due to an outdated chassis. It was based on the M37 ACS units, which, in turn, were a development of the M24 light tank, created during the Second World War. Apparently, promising mortars were planned to be exploited for quite a long time, and the equipment based on the Chaffey tank had to remain in service no more than until the mid-fifties due to moral and physical obsolescence. Thus, the T38 self-propelled mortar was of little interest to the troops because of an aging chassis with insufficient characteristics.

After completion of the tests, the prototype T38 self-propelled mortar lost its weapons and later, according to some data, was used as the basis for new prototypes. The failure of the T38 project did not affect the further development of self-propelled artillery systems. Already in the early fifties, a new project was launched to create several self-propelled mortars with weapons of various calibers. By the middle of the decade, new designs led to the adoption of several new combat vehicles, including those equipped with 107-mm mortars. The T38 project, in turn, remained in stories as an interesting, but hopeless development, the fate of which was affected by the poor choice of the base machine.