As a result of the shelling by militants of the school in Deir ez-Zor, at least 9 children died

December 22 2015
8
Today, the militants of Daishe (ISIL), retreating under the onslaught of the Syrian government army, attacked the city of Deir ez-Zor. As a result, several mines hit the courtyard of one of the local schools. The head of the city reports that as a result of the shelling of the school, the militants killed at least 9 children, 15 were injured of varying degrees of severity. It's about girls' school. 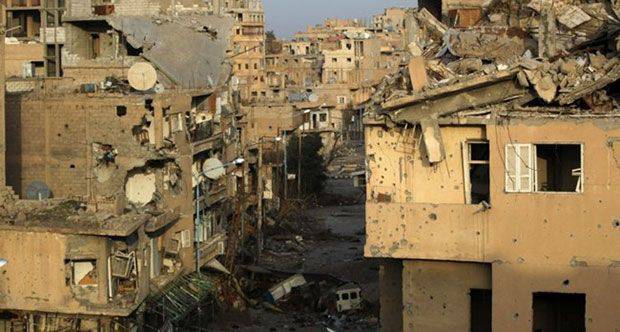 RIA News cites a fragment of the statement of the agency interlocutor:
Mortar terrorists fired on a school in the Hrabish quarter. The shelling was this morning, nine children died.

Information Agency Sanareferring to a representative of the Ministry of the Interior of Syria, reports that the shells exploded on the school site at the time when the girls were sent to an educational institution.

Meanwhile, the active phase of the offensive of the Syrian government army continues. Thus, significant success was achieved by soldiers of the SAR Armed Forces in the metropolitan province of Damascus, where the largest underground tunnel of militants was found and destroyed, connecting East Guta with another Damascus suburb, Jobar. As a result of a series of strikes on the object, several dozen militants were buried under the rubble along with weapons and ammunition.

Ctrl Enter
Noticed oshЫbku Highlight text and press. Ctrl + Enter
We are
Weekly summary (February 27 - March March 5) about the military and social situation in the DPR from the Mage military officerReports from the militia of New Russia for 13-14 September 2014 of the year
8 comments
Information
Dear reader, to leave comments on the publication, you must to register.