From the Geneva communique to the 2254 Resolution 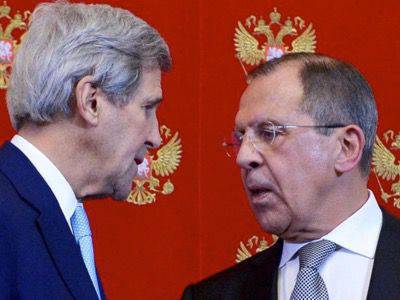 The content of 2254 is almost the same as the Geneva communique adopted three years ago. The two most powerful military powers expressed support for the Syrian Arab Republic, while the imperialists, and especially France, continue to bear the dream of overthrowing power by force. However, the world has changed over the past few years, and the new agreement will be difficult to block, as was done in 2012.


Relations between Washington and Moscow

The United States and Russia agree for the second time and agree on a peace plan for Syria.

- The first time this happened at the Geneva Conference in June 2012. [1]. Then it was about establishing peace in Syria and throughout the Middle East by dividing the region into zones of influence [2]. However, this agreement was sabotaged by Secretary of State Hillary Clinton and a team of “liberal hawks” and “neo-cons”. Less than two weeks later, France convened the “Friends of Syria” [3] conference and resumed the war against Syria, launching Operation “Volcano in Damascus — an earthquake in Syria” [4]. In 2013, a coup d'etat was carried out in Ukraine. Both events led to an almost complete cessation of diplomatic relations between Washington and Moscow.

- The second time was during a meeting in the Kremlin of John Kerry with Vladimir Putin in December 2015 [5]. After this meeting, a meeting of the High Commission of the Syrian Opposition was immediately held, a resolution 2253 [6] was adopted, prohibiting the financing of al Qaeda and Daesh, and 2254 [7], which gave an official character to the efforts made in Geneva and Vienna regarding Syria. To everyone's surprise, the High Commission of the Opposition elected the former Prime Minister Riyad Hijab, a member of the Ba'ath Party, as head of the delegation. In order to avoid a misinterpretation, Secretary of State John Kerry said at a meeting in the Kremlin that the United States’s view of President Assad would not affect the elections in Syria, and he confirmed at a meeting of the Security Council that “the political process is not in the choice between Assad and Daesh, but in the transition from war to peace. "

Russia acted in accordance with the Geneva communique. The latter envisages the introduction of opposition representatives into the government of the national unity of the SAR. Wanting to prove that the struggle is being waged against terrorists, and not against political opponents, although armed, Russia has concluded an agreement with the Free Syrian Army and its sponsor, France. And although this army never had the importance that the Western media attached to it, and after 2013, it ordered to live long, 5000 militants, who came from nowhere, now cooperate with both the Russian army and Syrian government forces, and fight against Al Qaeda and Daesh. The picture is all the more surprising when you consider that the SSA was conceived for military operations in the south, and now it is fighting in the north of the country.

After the sabotage of the decisions of the Geneva Conference, held in June 2013, a lot of water has flowed. Some characters were neutralized, and the balance of power has changed dramatically.

- President Obama seems to have taken power again and closed the Arab Spring project. He managed to consistently get rid of General David Petraeus (in November 2012, he was arrested, and even handcuffed), Hillary Clinton (in January, 2013) and General John Allen (dismissed from his post in October 2015 g, i.e. exactly 2 a month ago). He also cleared his administration, including the National Security Council, from the Muslim Brotherhood. However, in the UN, the second number is Jeffrey Feltman. He developed a plan for the complete and unconditional surrender of Syria and obstructed the peace negotiations on Syria, counting on the defeat of the Syrian Arab Army [8].

- In June, the 2013 of the White House forced the Qatari emir Hamad Al-Thani to renounce power, and his Prime Minister to leave politics [9]. However, the latter becomes the co-chairman of the Brookings Intitution Doha, and the new emir Tamim financed the Muslim Brotherhood and their terrorist organizations until the crisis of diplomatic relations with his Saudi neighbor in March 2014 [10].

- Despite the warnings of the DIA, the Petraeus team managed in the middle of 2014 to increase the size of an organization called the Islamic Emirate in Iraq, created back in 2004 by Colonels James Steele and James Coffman and Ambassador John Negroponte. They used this structure for ethnic cleansing and the subsequent division of the country. This operation was supported by a number of states (Saudi Arabia, Cyprus, the United Arab Emirates, France, Italy, Israel, Qatar, Turkey and Ukraine) and transnational companies (Exxon-Mobil, KKR, Academi).

- The White House managed to remove from power the clan of the former king Abdullah and the clan of the prince Bandar bin Sultan, and also bring the princes Mohamed bin Nayef and Mohamad bin Salman to power in Saudi Arabia under the new king Salman. Although this weakened power, it made political change impossible.

“The 5 + 1 agreement marks Tehran’s refusal of revolutionary ambitions [11], so the modus vivendi with the Saudis are now becoming real [12], although events in Yemen make this difficult.

- Both Washington and Moscow were hostile to the act of Turkish President Recep Tayyip Erdogan [13]. However, Turkey is a NATO member, and this forces the White House to be careful, especially since Ankara is an ally of Kiev [14], another theater, which also occupies an important place in the global strategy of the United States [15].

- The balance of power between Washington and Moscow in June 2012 and September 2015 was gradually changing. NATO has lost its superiority in both intercontinental missiles [16] and conventional weapons [17], and Russia is now the most militarily powerful nation.

That is, there was a change of roles. If in 2012, the Kremlin sought to rise to the level of the White House, today the White House is forced to enter into negotiations and make concessions due to the loss of military superiority.

The analytical center of the military-industrial complex and the herald of the new time Rand Corporation recently published the Peace Plan for Syria. In October, 2014 was a shock to the American establishment, stating that a victory for President al-Assad would be the best outcome for Washington [18]. And now she is proposing a cease-fire, which will justify the presence of opposition representatives and Kurds in the future national unity government [19].

Opposition to a new world order

Opposition to Barack Obama’s policy, however, has not stopped. So, the Washington Post accused him of surrendering to Russia on the issue of regime change in Syria [20].

In 2012, opposition to peace in Syria could be explained by the desire to make the most of US military superiority. But given the creation of new Russian weapons, this makes no sense. Therefore, this can only be explained by the desire to provoke a world conflict, hoping that the West will win it. However, it is impossible to hope for this if China can also reform its army.

France, after the adoption of the resolution 2254 began to act in the same way as it acted after the Geneva Conference. Foreign Minister Laurent Fabius reiterated that all parties should take part in the transition process in Syria except President Assad himself, which is contrary to the principles of the Geneva communique and resolution 2254.

In 2012, the French position could be qualified as a desire to change the regime by forming the Muslim Brotherhood government instead of Ba'ath, similar to changing secular regimes in other Arab countries (“Arab Spring”), or as an attempt to “bleed the Syrian army” and ease Israel’s regional dominance, or simply as a colonial ambition. But today, none of these three goals is unattainable, since they all involve war against Russia.

France turns the Syrian issue into a political tool for American liberal hawks and neo-cons. In this matter, she is supported by Jewish missionaries who, like Benjamin Netanyahu, consider it their religious duty to speed up the coming of the Messiah by provoking eschatological opposition.

Peace in Syria or nuclear war?

It would be extremely surprising if liberal hawks, neoconservatives and Jewish missionaries managed to impose their policies on two great powers. However, the final result will be difficult to achieve by January 2017 and the arrival of the new president in the White House. Now it’s clear why Vladimir Putin pointedly supports Donald Trump, who is more able to block the path of his girlfriend Hillary Clinton [21].

In essence, everything is ready to make peace and allow the losers to leave with their heads held high.

- Resolution 2253 bans funding for Daesh and Al-Qaida. The 2254 resolution repeats the Geneva communique of 30 June 2013. The two great powers agreed to support the Syrian Arab Republic and to promote the creation of a government of national unity.

- The armed opposition, supported by Saudi Arabia, elected former Prime Minister Riyad Hijab, a member of the Ba'ath Party, who served as Prime Minister at the time of the Geneva communique, as head of her delegation. At the same time, Russia concluded an agreement with the Syrian Free Army and its sponsor, France.

- Everything is ready to make peace and allow the losers to leave with their heads held high. However, as in 2012, France, after the adoption of the 2254 resolution, put forward new requirements.

Ctrl Enter
Noticed oshЫbku Highlight text and press. Ctrl + Enter
We are
A great interview with Sergey Lavrov: about Ukraine, Obama and IranWho will be the next victim of destabilization in the Middle East?
Military Reviewin Yandex News
Military Reviewin Google News
15 comments
Information
Dear reader, to leave comments on the publication, you must to register.