December 23 2015
52
The Turkish president criticized the Russian air operation in Syria and said that there are no Islamic State militants in Bayyrbudzhak; ethnic Turkmen live there and are being killed. R.T. Erdogan also informed agitated businessmen in Ankara that the export of Turkish goods to Russia will increase, despite the “problems” in relations between the two states. 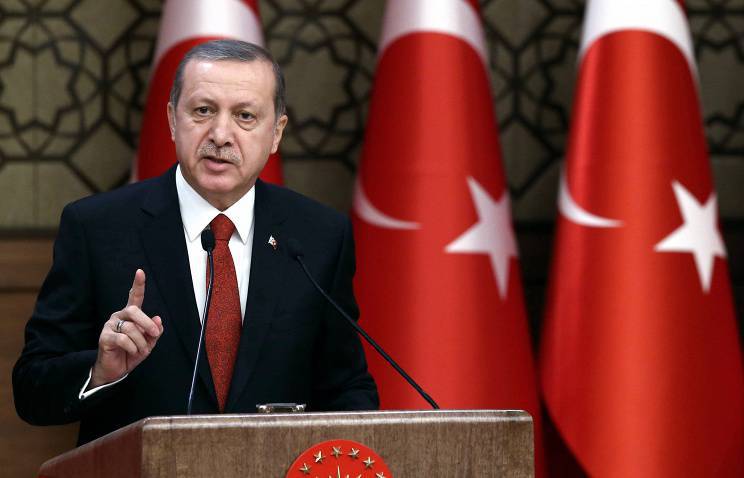 Turkish President Recep Tayyip Erdogan criticized the Russian air operation in Syria and said that he had already spoken to Vladimir Putin about the Turkmen (aka the Turkomans) living in the north of Syria. About this, as reported "Lenta.ru", R.T. Erdogan said, speaking at a meeting of the Chamber of Commerce of Turkey.

“I personally told dear Putin that there is no“ Islamic state ”in Bayyrbudzhak, there are Turkmen there. Now Turkmen are being killed. They came to our border and said that if they die, they want to stay on their land, ”the Turkish president said.

According to Erdogan, Turkish exports to Russia may increase, despite the crisis in relations between the two countries. The President told Turkish businessmen: “Despite the problems that we have with Russia now, I believe that our exports will increase again. You can not worry.

In addition, in his speech, Erdogan reported on the death toll in Syria Turkmen. "Currently there are dead Turkmen", - quotes him RBC.

As the agency recalls, during a press conference on December 17, V.V. Putin said that Russia had shown its readiness to cooperate with Turkey "on the most sensitive issues for it." However, Ankara did not ask to take into account the interests of the Syrian Turkmen in the course of the military operation. “I have never heard of so-called Turkomans,” the president said. “I know that the Turkmens live, our native Turkmens, in Turkmenistan, and here you cannot understand anything <…> Nobody told us anything”.

There is no understanding with official Ankara, Vladimir Putin said further. He added that he did not see the prospects for the restoration of relations so far: Moscow is “almost impossible to come to an agreement with the current Turkish leadership.

According to the Minister of Foreign Affairs of Turkey, Mevlüt avusoglu, Russia carried out about four thousand bombing raids, and 90% of them fell on moderate opposition. According to the minister, in Russia they “dream” of having Bashar Assad regained power in Syria.

“The death toll due to the Russian bombing of civilians exceeds six hundred,” Cavusoglu quotes the publication. - According to some organizations, eight hundred people died. We want the world to know: more than 150 dead are children. ”

Blows russian aviation in Syria are useless, according to journalists Martin Chulov and Kareem Shaheen, whose publication was published in the British newspaper The Guardian (source of translation - "InoSMI").

The authors believe that, having begun to apply air strikes to support Assad, Russia was counting on the completion of the campaign on the ground by Syrian troops. But it did not work out: after almost three months, the Syrian army and the Shiite forces supporting it “did not achieve any serious success in ground operations.”

"At the same time, Russian aviation inflicted new air strikes, which, according to the available data, killed at least 600 Syrian civilians, including 70 people who died on Sunday in the city of Idlib."

Destruction from air strikes intensifies, and the ground troops of the Syrian army do not show "the ability to use the situation for their own purposes." According to the correspondents, the Russian air campaign, which began on September 30, “is largely focused on facilities that are not related to ISIS strongholds.” Representatives of the local armed forces, as well as diplomats say that at least 80% of Russian air strikes are inflicted on territories held by opposition forces unrelated to ISIL. For example, according to the Syrian Network for Human Rights, mosques, bakeries, residential buildings, schools, power plants, and water supply systems are bombed. According to this human rights organization, the list of those killed during the bombings carried out by Russian aviation includes 570 civilians, including 152 children.

“We have never been bombed like that,” said Isa Khalid, one of 300’s thousands of residents in the eastern part of Guta. - The sky above us was like in Hiroshima. Wherever you look, these mushroom-shaped clouds were everywhere. The destruction was incredible. ”

One of the goals of the Russians, the publication indicates, is to put pressure on Turkey, which does not intend to lose influence in the territories close to its border.

This topic continues to other observers. They speak already about the “cold war” of Russia and Turkey.

According to the Turkish columnist Kadri Gursel (“Al Monitor”, the source of translation is Mixednews.ru), Turkey fell between two fires: the Cold War with Russia and the armed conflict with the Kurds.

"Frosts" came on November 24, when Turkey shot down a Russian bomber. And here the Kurdistan Workers' Party cannot be overlooked.

Back in 1980, Syria, an ally of the USSR, offered the PKK asylum, military and logistical assistance. After the collapse of the USSR, the Russian Federation, which was irritated by the Turkish pan-Turkist trends, as well as the hidden support of Turkey for Chechen separatists, granted the PKK legal status on its territory. And it is not surprising that Russia became the first country from which Abdullah Ocalan asked for political asylum (in 1998 year). Now the PKK has once again become an element of the Syrian “equation”: the Syrian twin of this movement, the Democratic Union Party (PYD), turned out to be the dominant force in the province of Rojava (western Kurdistan in Syria) and a participant in the campaign against IG.

Ankara perceives the “Democratic Union” as a threat: after all, Kurdish autonomy is a danger to the territorial integrity of Turkey.

The position of Russia is also important here. The comments of the Deputy Foreign Minister of Russia Alexei Meshkov, made by him on December 16, are known. According to the columnist, his words "clearly indicate that the" Kurdish card "will be played against Ankara."

“Turkey’s actions, and vice versa, its inaction on certain issues represent a real threat” to Russia's national security. This Meshkov said in an interview with RIA "News". In his opinion, the Kurds should not be excluded from the peace process in Syria and from common efforts to fight against Daesh and other terrorist groups.

“Turkey refused to change its policy towards Syria, while continuing to increase pressure on the PKK, which led to an aggravation of confrontation in the south-east of the country, mostly populated by Kurds. The stronger this pressure becomes, the higher the likelihood the PKK will come closer to Russia. ”

According to the columnist, due to the increased military pressure on the PKK, it is quite possible for a group that is ready for external support to emerge as part of the Kurdish movement.

Analyst conclusion: Ankara is “absolutely necessary” to end the cold war with Russia and achieve stability on its own territory. However, “the normalization of relations has become almost impossible, since Russia demands official apologies and compensation for the downed aircraft as prerequisites for improving relations.” Agreeing to such conditions, Erdogan would suffer a “humiliating defeat.” Therefore, Russia now has the opportunity to increase military and political pressure on Ankara. The goal of Moscow is to force Ankara to abandon the support of jihadist groups in Syria. Will Ankara endure a cold war with Russia while simultaneously having a “hot” conflict with the Kurdish Workers Party? It remains only to guess.

Meanwhile, the United States also analyzed the Turkish-Syrian-Russian topic and came to the conclusion that the end of ... Putinism.

"Syria - the beginning of the end of Putinism?" This is the title of an article by Colbert I. King, published in the Washington Post (translation source - "InoSMI").

“Everyone laughed when President Obama warned Russia that it might get bogged down in the Syrian quagmire,” the author writes. But who will be the last to laugh now?

"The Russians return to their homeland in bags for corpses:

• A Russian passenger plane carrying the 224 man aboard crashed in Egypt as a result of an explosion of a bomb planted by Islamic State militants in retaliation for Putin’s military actions in Syria.

• The Russian bomber was shot down by the Turkish Air Force after it crossed the Turkish airspace, which was the first direct attack by a NATO member on a Russian military aircraft in the last 60 years.

• A Russian military helicopter that took off to search for and rescue a bomber pilot was shot down by Syrian rebels.

These sacrifices have become the price that Putin is paying for unilateral and reckless military intervention in the situation in the Middle East, where tensions have now reached their ultimate level. ”

Putin is engaged in Syria, the observer notes, and in Russia inflation is rising, the economy is shrinking, the level of poverty is increasing. Western sanctions "dealt a sizeable blow to the Kremlin." The decline in oil prices (the main source of income for the Russian government) "aggravated the situation." And not without reason, David Lesh in the Foreign Policy notes that “Putin’s intervention in Syria will end in something akin to the Egyptian Pyrrhic victory of 1957 of the year or the sudden strengthening of Soviet influence in the late 1950s, which was accompanied by a sharp increase in foreign policy problems. It will take another half a century, and historians will probably call the Russian actions in Syria in 2015 the beginning of the end of Putinism, as the landing of Egyptian troops in 1957 was the beginning of the end of Nasserism. ”

The Russian government, further writes Colbert King, is forced to spend resources "on the realization of Putin's ambitions." And because of this, it "cannot fulfill its social obligations to the people."

“Obama is right to disagree with Putin’s leading position. Or not trusting Russia's alleged influence in the international arena. Obama is right that he remains cool and continues to work on creating an international coalition of strong powers to launch an offensive against global terrorism. ”

According to King, "Putin has plenty of opportunities to stir up the water," but Russia "cannot compete with the United States as a superpower and leader in the process of resolving the situation in the Middle East."

Summing up, we note that the West is united with Turkey in the negative assessment of Russia's activities in the Middle East. In addition, neither Europe nor the United States, nor, of course, Turkey, do not consider Moscow’s role in the international arena significant.

It cannot be otherwise: Washington does not intend to say goodbye to the status of the world hegemon, or even think about it. Therefore, the reports of “human rights organizations” and similar in tone speeches by representatives of the Turkish authorities will continue. Turkey is not going to miss its interests near the border in the same way as the West is not going to recognize the role of Russia in the fight against IG. Such recognition would be tantamount to political defeat.