Japanese planes and crews in the service of the Allies

December 22 2015
12
Today, the course of World War II in the Pacific Ocean is known only in general terms to most Russian-speaking audiences. In a country that waged a bloody war with Nazi Germany in Europe, interest in the Pacific theater of operations, which was located many thousands of kilometers from Moscow, was secondary. At the same time, the hostilities waged by the United States and Britain in the Pacific were rife with many interesting episodes and stories. Take, for example, the same operation with the landing of Americans on the island of Kyska, which turned into a real joke. These interesting episodes of the Pacific War include the use of Japanese aircraft with crews in the interests of the British Empire.


In August, 1945, after the American bombing of Hiroshima and Nagasaki with atomic bombs and the Soviet Union entering into war with Japan, which in the shortest possible time achieved a crushing defeat of the largest Japanese Kwantung Army, the position of the Land of the Rising Sun was disastrous. The Japanese empire was falling apart before our eyes. In a radio address to the nation of August 15, the emperor of Japan recognized that the continuation of the armed struggle would cause the complete destruction of the Japanese people, and on September 2 of 1945, the Second World War officially came to an end. In August, the British military command regained control of Southern Indochina (Vietnam), Borneo, all of Java and Western New Guinea. In Indochina, with a total population of millions of people in 128, then there were a large number of Japanese prisoners and internees. There were a total of up to 633 thousands of Japanese military and about 93 thousands of civilians, as well as about 10 thousands of Koreans and Thais. All the military were demobilized and had to be repatriated.

At the same time, the British took on the bulk of the concerns of transporting and arranging such a large number of people, while the Americans defiantly distanced themselves from ways to solve this problem. To transfer this contingent in Japan, the British had to create additional 9 transport squadrons and two more special-purpose squadrons. At the same time, a power vacuum was established in Indochina itself for a time. In the north of the country, the Vietnamese nationalist Viet Minh, who declared the country's independence from France, lifted their heads; detachments from China quickly came to their aid. 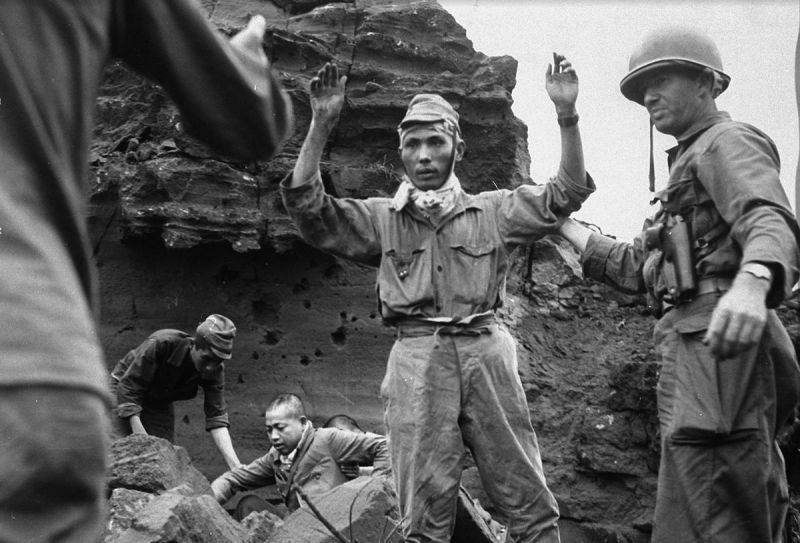 In September, 1945 of the Vietnamese airfield Tan Son Nhut boarded the first Allied aircraft, it was the American C-47 transport, which was owned by the Office of Strategic Services (OSS, the first United States intelligence agency, predecessor to the CIA). The task of the American intelligence officers who arrived here was the primary collection of information. Among other things, they reported that 50 serviceable Japanese transport planes, fighter-bombers and simply fighters were found at the airfield. It was also reported that the power in Saigon formally belongs to the Japanese administration, but in the city there are about a thousand armed rebels, who call themselves "Annamants".

September 6 The first units of the British Army began to arrive on 1945, the Hyderabad Regiment with attached units of medical and engineering units. First of all, the British organized the RAPWI - Recovery of Allied Prisoners of War and Internees (a department for sending prisoners of war). A permanent radio contact was also established with Rangoon, in which the command of the British occupying forces was located.

Marshal Walter Cheshire flew to Saigon to coordinate air traffic from the Royal Air Force. According to his advice, consolidated reconnaissance units from 1945 and 681 squadrons armed with both Spitfires XIX and Moskito PR684 and Spitfires Mk VIII 34 were deployed to the Tan Son Nhut airfield during September 273 of the year. Squadron Their main task was to escort Allied transport aircraft and conduct unarmed reconnaissance. At the same time, Walter Cheshire had the idea to create a special operational connection “Gremlin”, in which, in addition to British and French aircraft, it was planned to use not only captured Japanese aircraft, but also captured Japanese pilots. 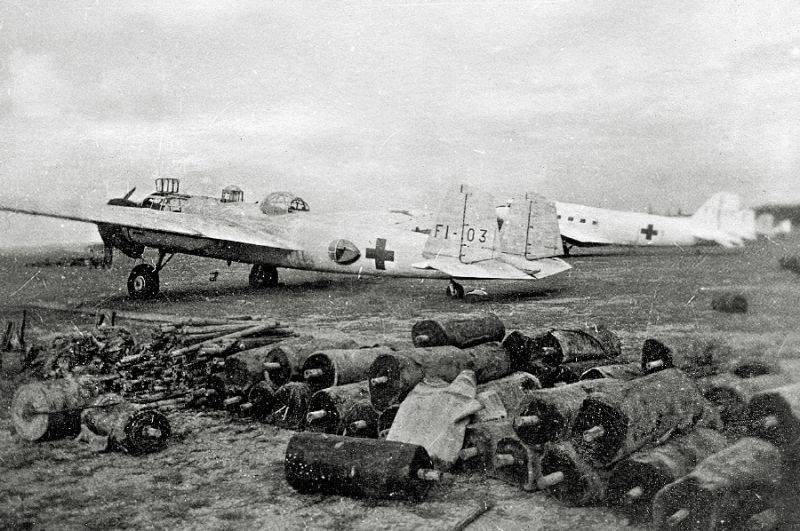 Mitsubishi G3M "Nell" and L2D "Tabby" airplanes painted "prisoners" with green crosses, these crosses were applied to Japanese aircraft after the surrender of Japan

For what reason it was decided to call the task force "Gremlin" is difficult to say. This mythical creature from English folklore appears to have first appeared directly during World War II in 1940. The mythical character became popular among British military pilots and aviation technicians in the midst of the Battle of Britain. And the first publication about this "phenomenon" appeared in the English press in April 1942. With the light hand of British pilots, the mythical creature, known for its hatred of various technology and the people who use it, got life on the pages of science fiction and in cinema. In any case, the British-created unit with an unusual name was absolutely peaceful and had to solve the problems of transporting people and goods, reconnaissance, delivering humanitarian aid, and so on.

The squadron-leader MacNab was appointed to command the task force. In this case, most of the sorties were made by Japanese pilots, who were under tight control by the British. In addition to conducting reconnaissance flights and transporting Japanese, British, and French returnees, the unit’s pilots were used to deliver humanitarian supplies and to drop leaflets calling for surrender. Many Japanese soldiers continued to wage their own war after Japan’s surrender not just for years, but for decades, not believing in the incident, not knowing about it or considering information about the surrender of their country as misinformation. In addition to Indochina, the airplanes of the Gremlin operational unit managed to light up in Singapore and Bangkok.

Speaking of Japanese aircraft, it can be noted that, starting from 1932, all army vehicles received the designation "Ki" (short for "China" - design) and a serial number, for example, Ki-36. Japanese designated their own aircraft models using Roman numerals. In addition, the planes of one model could differ depending on the modification by the presence of an additional hieroglyph (which was later replaced by Latin letters): “Kai” (a) - meant changing the design of the airframe, “Ko” (b) - changing the powerplant of the aircraft, “Otsu »(C) - a change in the equipment or designation of the aircraft," Hey "(d) - a change in the arming of the machine. In addition to the short designation, the Japanese used the numbering by the year the aircraft was adopted for service. In doing so, they led him according to their own system of chronology. In the designation of the aircraft indicated only the last two digits of the year. For example, an aircraft put into service in the 1939 year (2599 year according to Japanese chronology) received the designation type 99, in 1940 (2600 year) - type 100, etc. 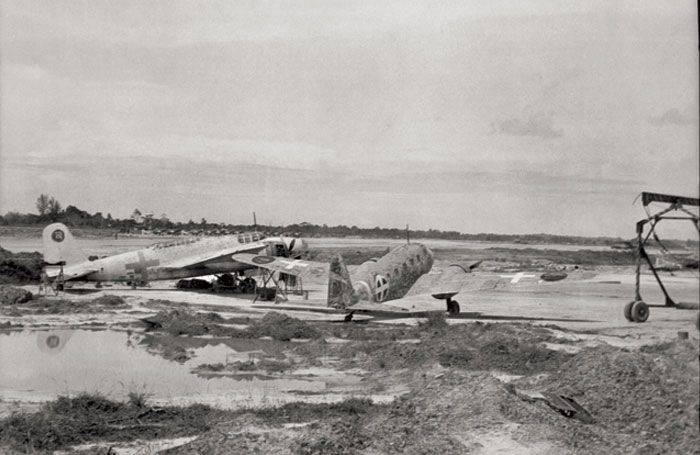 In Indochina, the Allies captured a sufficient number of Japanese aircraft, only at the airport Tan Son Nhut, as noted above, they were 50. The vast majority of captured vehicles belonged to the aircraft of the army aircraft. For coherent flights and conducting photo reconnaissance, the allies widely used Japanese aircraft Ki-36 "Ida", Ki-51 "Sonia", Ki-46 "Dinah" and Ki-48 "Lily", the names of the machines used code names that gave the aircraft allies. The first two aircraft consisted of a light attack aircraft and short-range reconnaissance type obsolete at that time. For example, the maximum speed of the Ki-36 “Ida” aircraft did not exceed 285 km / h. These machines were used by the Japanese mainly over China, where the probability of meeting with modern Allied fighters was minimal. Ki-46 "Dinah" was a heavy twin-engine fighter with powerful weapons. The car could accelerate to 629 km / h, and its armament consisted of two 20-mm and one 37-mm aircraft gun. The average twin-engine bomber Ki-48 "Lily" could take on board up to 800 kg of bombs. Most likely, in the last two vehicles, the Allies attracted their practical range, which was 2000 and 2400 km, respectively, which expanded their capabilities for conducting reconnaissance.

To carry out transport flights in the operational connection “Gremlin” were used: the average Ki-21 “Sally” bomber, which could take on board up to 1000 kg of cargo, the practical range of its flight was 2700 km. After the end of World War II, the aircraft remained in service with the Thai Air Force; Ki-54 multi-purpose aircraft “Hickory”, which was also used as a training train in Japan; the payload of this vehicle reached 8 passengers; Ki-57 transport aircraft Topsy was one of the most advanced in its class in Japan. Created in August 1940, this aircraft could travel up to 3000 km, its maximum speed was 470 km / h, and its passenger capacity was 11 people. All these transport vehicles fully met the requirements of their time.

Another Japanese captured aircraft that the Allies paid attention to was the Tabby L2D. This aircraft was a Japanese "Lee-2". It was created on the basis of the famous American aircraft Douglas DC-3. A license for its production was purchased by Japan from the USA in February 1938 of the year. The USSR appreciated this aircraft even earlier by acquiring a license to manufacture the machine from the Douglas Aircraft Company 17 July 1936. The L2D “Tabby” aircraft was actively used in all Japanese theaters of military operations for transporting people, equipment and cargo. In all, up to 1945, 487-like machines were assembled in Japan.

Nakajima B5N2 “Kate” in white color “captive” with green crosses, such crosses were put on Japanese planes after the surrender of Japan

The Allies used Japanese aircraft and pilots rather intensively. Only in January, 1946, the Japanese made 408 sorties on various missions, spending 810 hours in the sky. During this time, they transported 2200 passengers and about 228 tons of various cargoes. For comparison, the statistics of the 118 th wing of the Royal Air Force in Burma, which for the same period of time, had three Dakot squadrons (the C-47 Dakota was also based on the passenger Douglas DC-3) transported 4500 passengers to Hong Kong.

On most of the captured Japanese planes that were used by the allies, the identification marks of Japan were replaced or painted over with green crosses. In this part of the Japanese aircraft, for example, Ki-43 "Oscar", received crosses in red, which can be well identified by looking at monochrome photographs. Why a cross and these colors were chosen for recognizing airplanes, today we can only guess. At the same time, the operational connection “Gremlin” existed for a relatively short time. The aircraft were operated until complete wear and tear, and new spare parts for them were simply nowhere to be found. Also, some Japanese aircraft were operated for some time by the French Air Force in Indochina, for example, the Ki-43-III Ko or the Ki-54 "Hickory". The French were transferred at least seven Ki-54, which they did not disdain to use and exploited until the 1947 year, when they were all written off from the French Air Force.

Ctrl Enter
Noticed oshЫbku Highlight text and press. Ctrl + Enter
We are
The defeat of the Kwantung Army - a sample of genuine lightning warKwantung Army. 70 years of surrender
Military Reviewin Yandex News
Military Reviewin Google News
12 comments
Information
Dear reader, to leave comments on the publication, you must to register.