December 27 2015
59
In November, the Memorial to the victims of the famine 1932 – 1933 was opened in Washington. The exact number of those killed at the opening ceremony was not called: they talked about the millions of victims. 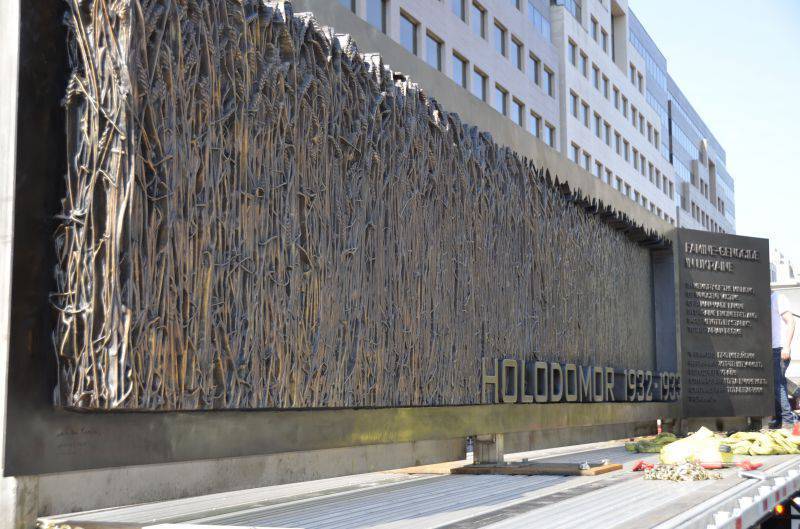 Washington. Memorial to the victims of famine 1932 – 1933
The organizers of the event did not repeat the absurd assertions about 7 – 10 million Ukrainians killed during the so-called famine. Otherwise, we would have to answer the question of where, when and by whom almost a third of the population of the Ukrainian SSR was buried.

HOLODOMOR AS AN IRRATIONAL AND ANTI-SCIENTIFIC REPRESENTATION

The law “On Holodomor 1932 – 1933 in Ukraine” was adopted by the Verkhovna Rada 28 in November 2006 on the initiative of then-Ukrainian President Viktor Yushchenko. Memorial Day for victims of famines is celebrated on the fourth Saturday of November annually. And the brainwashing of citizens of Ukraine goes on without a break. Historians like Stanislav Kulchitsky assure them that "the Holodomor was the result of a previously calculated and well-organized terror by famine."

In Soviet times, this twisted historian argued that "the idea of ​​organized famine in Ukraine is not only deeply erroneous, but also irrational, that is, unscientific." After the collapse of the USSR, Kulchitsky’s irrational and antiscientific idea was adopted for service. The idea that hunger was not needed by the Bolsheviks, if only because it had become an anti-advertisement for the collectivization of agriculture, he ignores.

The first to assert that the famine of 1932 – 1933 had an anti-Ukrainian orientation, as early as the 1930-s, the radical Ukrainian nationalists began. During the Cold War, the myth of the famine began to be used by the West in anti-Soviet propaganda. Under US President Ronald Reagan, who declared the USSR an “evil empire,” they engaged in the famine thoroughly. US citizen Yekaterina Chumachenko, who later became Yushchenko’s wife, also took part in this venture.

In 1980, Robert Conquest’s books The Harvest of Sorrow. Soviet collectivization and terror by famine "and James Mace" Communism and the dilemmas of national liberation: national communism in Soviet Ukraine in 1919 – 1933. ”

Speaking at an international conference in Tel Aviv, Mace, the first of Western researchers, qualified the famine in Ukraine as genocide by sowing the seeds of lies, which gave such a bountiful harvest in post-Soviet Ukraine.

Serious Western historians do not share the views of Mace and Conquest. And for this they have good reasons. For example, German historian Stefan Merle remarked:

And why, in contrast, hunger to some extent spared the north-western part of Ukraine? Much says that the measures taken by the government concerned the entire Soviet peasantry, and by no means only Ukrainians ...

Conquest and Mace do not provide convincing evidence in favor of their thesis on genocide. It's a shame that they did not even try to substantiate it seriously. The fact that these authors presented to the reader is a mixture of unsubstantiated allegations, leading questions and isolated facts.

The problems that arise from the material they have submitted about hunger as a result of national policies remain unresolved. Actually, the wider approach of Conquest, whose book aims to describe the struggle of the Bolsheviks not only against “Ukrainians”, but also against the peasantry as a whole, leaves the reader wondering why the author speaks of hunger only for Ukrainians. ”

The question is put right by German scientists. Another thing is to give an honest answer to him the propagandists of the myth of the Holodomor cannot.

At the beginning of the Harvest of Sorrow, Conquest quoted the words "a famous English writer": "Facts are sacred - opinion is free." Reliably established facts are exactly what will allow us to show the falsity of the myth about the anti-Ukrainian famine.
What happened in the same years outside the Ukrainian SSR?

The situation in a number of regions was extremely difficult. In Mordovia, the collective farmers of the Zubovo-Polyansky District ate a surrogate in the form of a mixture of lentil flour, moss, and millet chaff and fallen horses dug out of cattle graves. “Mortality by s. Anaevo has recently increased dramatically, 10 and more people die daily, mostly children. From 10 April to 10 May, at least 130 people died. Due to the lack of bread, the population goes to Siberia, where more than 30 farms have left Anaev, ”the special reference to the Mordovia regional executive committee of 21 in May 1933 said.
A similar food situation has developed in other collective farms of the region. Due to food difficulties, the epidemic situation has sharply worsened. In the first half of 1932, 1463 patients with smallpox, 1371 - typhoid fever, 909 - typhoid fever, etc. were registered. And these are only registered patients ...

Historian Viktor Kondrashin published the results of a survey of the registry offices of the districts of the former Nizhne-Volzhsky and Mid-Volzhsky territories of Russia as early as 1991:

“It is known that in the starving areas, due to the lack of normal food, people were forced to eat surrogates, and this led to an increase in mortality from diseases of the digestive organs. Actual books for 1933. Show a sharp increase (in 2,5 times). In the column “cause of death” there appeared records: “from bloody diarrhea”, “from hemorrhoid bleeding due to the use of a surrogate”, “from poisoning with ziruhoy”, “from poisoning with surrogate bread”. Mortality significantly increased due to such causes as “intestinal inflammation”, “stomach pain”, “stomach disease”, etc.

Another factor that caused an increase in mortality in 1933 in this region of the Volga region was ... typhoid, dysentery, malaria, etc. Records in assembly books allow us to speak about the outbreak of typhoid and malaria epidemics here. In sec. Kogevino (Nizhne-Volzhsky Krai) in 1933. Of the 228 dead, 81 died of typhoid fever and 125 of malaria. The following figures speak about the scale of the tragedy in the village: in 1931 there, a person died from typhoid fever and malaria 20, in 1932, 23 died ...

In the books of books, there are other causes of death of the population in 1933, which were absent in the past, and now determined the growth of mortality and directly pointing to hunger: many peasants died “from hunger”, “from hunger strike”, “from bilelessness”, “from exhaustion organism on the basis of starvation ”,“ from malnutrition of bread ”,“ from starvation of death ”,“ from hungry edema ”,“ from complete depletion of the organism because of insufficient nutrition ”, etc. In sec. Alekseyevka from 161 of the deceased 101 died of starvation. ”

Historian Yevgeny Oskolkov wrote about the tragedy of another Russian family: “In the Krasnoyarsk farmhouse (now part of the Ternovsky village council of the Sholokhovsky district. - Omskolkov's note) of the Lebyazhinsky village council of the Veshensky district of Semen Danishovich Shmatov, a grain-grower, died of starvation. In December, 1932, Mr. Semyon Danilovich and his wife, Ulyana, buried nine-month-old Grunya.

But a fragment of the memories of F.L. Slynko (town of Belovo, Kemerovo region):

“When in the Akmola region they began to organize collective farms, they didn’t accept the father as a farmer and no tax authorities. He had to leave his native village and look for another share with his family. So he was forced to go to his relatives in the North-Kazakhstan region, the village of Pokrovka, Mamlyut district ...

My father settled down to clean the snow at the airport of the local Osoviahima, began to get rations on himself. We, the dependents, were not allowed rations. We were swollen from hunger, the father caught the crows, who got the hand to lure at the airport. Once I covered a flock of sparrows with a fishing net - here was a holiday for us, our joys cannot be described. 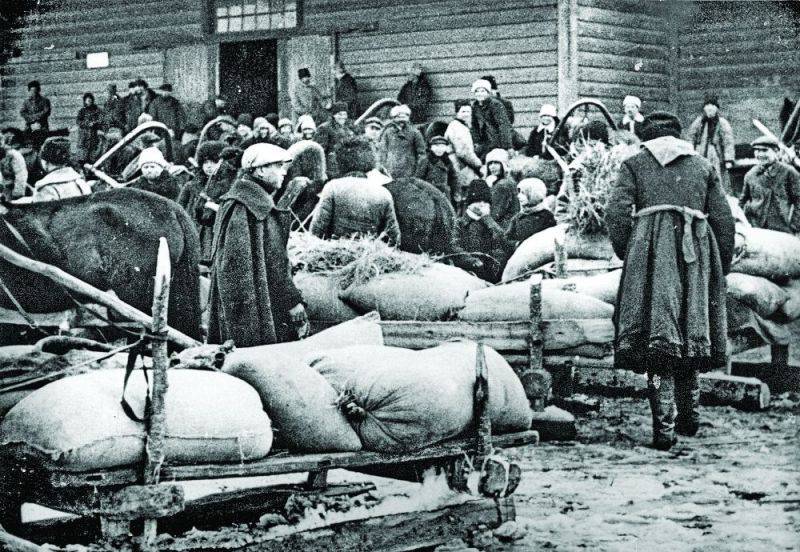 My father grew weaker, completely emaciated, and went to Pokrovka for his relatives to at least get something for us. And on the road, before reaching the village, he died on the side of the road. At that time, a lot of people died at Mamluta station ...

My father had documents in his pocket, and our friend recognized him, came and told his sister that his father was dead in the barn. There is a stir in the family, a cry. The sisters went to look for the father’s body, but they don’t give it to him. With great difficulty we got and brought on a sled home.

The neighbors made a coffin, but there is nothing to put on, there is no linen — only rags. Neighbor ... gave worn, but clean underwear, pants and shirt. There was no Russian cemetery in Mamlute, it was necessary to bury it in Pokrovka. But there is no transport, and they decided to bury at the station by the tracks - a Russian cemetery spontaneously formed there. ”

Note that the propagandists of the anti-Ukrainian famine amicably silent about Russian cemeteries.

The head of the political department of the Yeisk MTS drew a heavy picture: “The condition of people in January of 1933 was terrible. From January to April, a number of collective farms died from 365 to 200 people. Total for 4 collective farms - over 1000 people. In Eyukrepreniya there were a number of cases of massacre and cannibalism of their loved ones, relatives. The corpses were stolen from the cemetery. ”

The massacre and cannibalism took place not only there. In the Volga region, eyewitnesses witnessed the facts of cannibalism in the villages of Shumeyka - Engels and Semyonovka - the Fedorovsky cantons of the Autonomous Republic of Germans of the Volga region, Simonovka, Novaya Ivanovka of the Balandinsky district, Ivlevka - Atkarsky, Zaletovka - Petrovsky, Ogaryovka, New Burasy - Novo Brask region, Brashinsky region, Brashinsky district - Volsky districts of the Saratov region.

Often the object of cannibalism were children. At times, the threat came from relatives and friends who lost their mind on the basis of hunger. And the old men stopped eating and went to die away from their home ...

It has been a quarter of a century since the topic of 1932 – 1933's famine has ceased to be a white spot. stories. And the above, and many other facts are not secret. However, propagandists of the myth of the anti-Ukrainian famine are silent about them.

But sometimes they miss it. In the Harvest of Grief, Conquest admitted in passing that “in the Central and Lower Volga, as well as on the Don, according to the data available, the losses were proportionally as great as in Ukraine.”

And if so (and this is exactly so!), Then all the stories about the so-called famine, organized by the Soviet authorities with the aim of exterminating the Ukrainians, are dirty and cynical falsification of history, pursuing political goals.

Ctrl Enter
Noticed oshЫbku Highlight text and press. Ctrl + Enter
We are
Losses of the USSR and Germany in the Second World WarPopular unrest in the USSR. 1953-1985
Military Reviewin Yandex News
Military Reviewin Google News
59 comments
Information
Dear reader, to leave comments on the publication, you must to register.