Born of revolution: how a red star appeared in the Red Army 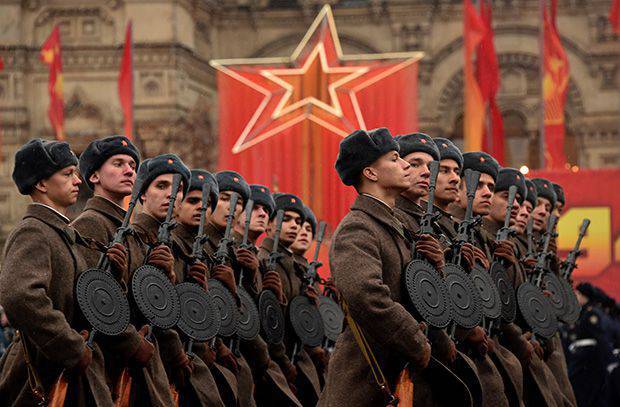 The history of domestic victories and military achievements of the twentieth century is inseparable from the main symbol of the Red, and later - the Soviet army: the red star. Laconic and simple, easily remembered and visible from afar, this identification mark of twentieth-century Russian soldiers is known all over the world. The Red Star became the same famous symbol of victory in World War II, like the T-34 tank or the Il-2 attack aircraft, and the same universally recognizable symbol of the post-war Soviet power, like the Kalashnikov assault rifle or the MiG-21 fighter.

From the Red Guard - to the Red Army

When the October coup ended, and the Bolshevik government faced the question of armed defense of their conquests, the only real military force on which they could rely were the Red Guard units. These heterogeneous formations, which became the main striking force in St. Petersburg and Moscow, consisted mainly of workers and the most conscious soldiers who left their units not for the sake of fleeing from war, but with the thought that life in the country really needed a serious shake-up. 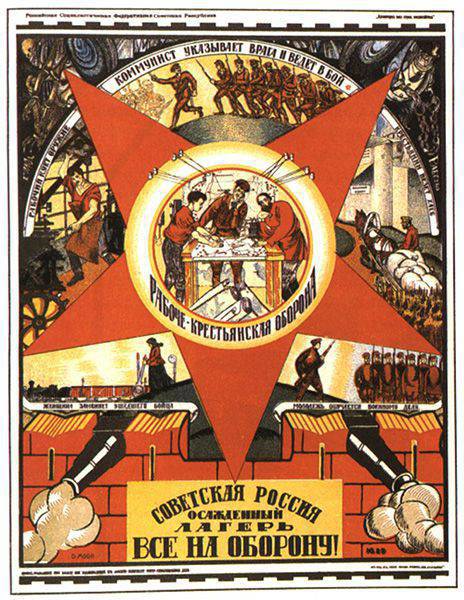 A red star. Poster D. Moore. Photo: wikipedia.org
But in the conditions of the beginning of the civil war, the armed forces of the new government were forced to use the same weapons, based on the same combat regulations and dress in the same military uniform as their opponent. Specific signs were the only way to distinguish one from another. Red Guards, as expected, relied on the red color, long and firmly associated with the revolutionary movement in Russia. At first they were treated with red bandages on the sleeves and red stripes on their caps and papakhas. But by December 1917 in Petrograd, the Red Guards, as the most organized of all such detachments, decided that they needed a more convenient and not so easily forged sign.

They became the red star, which 15 of December 1917 of the year introduced in the Petrograd Red Guard the commander of the Petrograd Military District Konstantin Yeremeyev. Five days later, on December 20, the Red Guard General Headquarters of Petrograd discussed the new emblem and recommended its use everywhere in revolutionary military units, both existing and emerging ones.

Where are the military stars

But to believe that it was Petrograd Red Guards who were the inventors of the star is wrong. As a military symbol, denoting, however, not so much the nationality of military units as the rank of commander, five-pointed stars appeared on the uniforms of the Republican French army during the Great French Revolution. Then they could be seen on headdresses, epaulettes, scarves, and uniform tails. A little later, in the Great Army of Napoleon I, the stars remained only on the generals' epaulets. Apparently, from there they were in January 1827 by the decree of the Emperor of All-Russian Nicholas I - a big fan of the Napoleonic army - and migrated to the epaulettes of Russian officers and generals. The size of the stars was the same, and the rank category was determined by the presence or absence of the fringe and its thickness. And when in 1854, the epaulettes began to take up positions for epaulets, then their rank was still determined by asterisks and still the same size: the rank category indicated the number and presence of gaps.

Almost at the same time, but at a very different end of Europe - in the garibald Italy swept by revolutionary fire - the red star appears for the first time as a symbol of the revolutionary army. In 1849, the five-pointed red mark put on the peak began to be worn along with the banner in front of the columns of supporters of Giuseppe Garibaldi. Given the popularity of this revolutionary in Russia, it is not difficult to assume that his symbolism was certainly known to domestic socialists and other monarchy subversors. 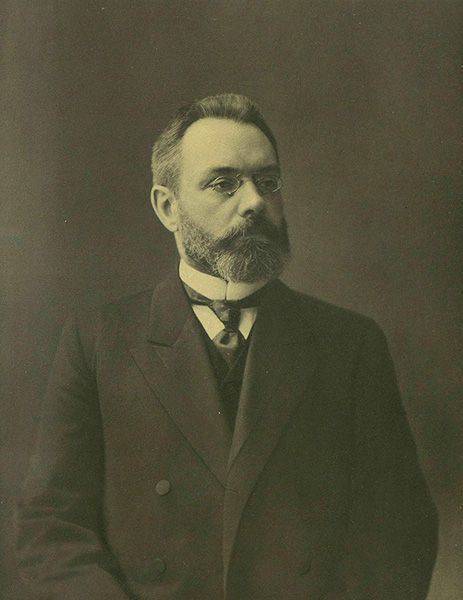 Alexander Ivanovich Guchkov. Photo: wikipedia.org
Finally, the idea to use the star as a military identification mark of the Bolsheviks could have been prompted by their predecessors from the Provisional Government. It is known that 21 on April 1917 of the year military and maritime Minister Alexander Guchkov, by his order No. XXUMX, introduced a new cockade for the sailors: an outlet with an anchor, above which a star was placed.

"Mars star with a hammer and a plow"

So, the star as a military symbol was already well known in Russia by 1917, and it only remained to decide how to turn it into a symbol of a new, revolutionary workers 'and peasants' army. The answer was obvious: make it red, like all previous insignia of the Red Guards.

So by the time the very concept of the Red Army appeared, its main symbol - the red star - had already been created. It only remained to turn it into a single sign of distinction for the new armed forces. And for this it was necessary to develop and approve a single look of the sign, since in December 1917, although it was introduced, didn’t regulate it, limiting only the dimensions: no more than six and a half centimeters.

The first official sketch of the red star as a sign of the Red Army was approved in the spring of 1918. 19 in April in the newspaper "News of the All-Russian Central Executive Committee of the Councils of Peasants, Workers, Soldiers and Cossack Deputies" appeared a correspondence stating that the badge for the Red Army soldiers in the form of a red star with a golden image of a plow and hammer was approved by the Commissariat for Military Affairs in the center. The star itself, which, by the way, in the article, and some time after its official adoption was called the “Mars star”, personified, on the one hand, the war god Mars, on the other, due to its red color - protection of the revolution. But the symbolism of the hammer and plow was even easier to read: they, of course, personified the “workers-peasant” character of the new army.

It is interesting that at one of the preliminary sketches, drawn and proposed by the Moscow Military District Commissioner Nikolai Polyansky, besides the plow and hammer, there was also a book - as a symbol of the intelligentsia. But they refused the book, considering that it overloads the sign and makes it difficult to read. The very idea of ​​combining the symbols of workers and peasants in one sign was first implemented in March 1917, when the image of crossed hammer, plow and rifle appeared on the banner of the workers of the Moscow factory Faberge.

When officially approved by Order of the People’s Commissariat of the Republic No. 321 of May 7, 1918, the new Red Army badge was called the “Mars Star with a plow and hammer” and had to be worn on the chest on the left. By the way, many Red Army men, especially the red commanders, preferred to put a badge on the sword belt so that it would not cling to it and close it, turning the red warrior into an unknown armed man. And this consideration in July 1918 made the Revolutionary Military Council of the republic give the order to transfer the red star from the chest to the cap of the cap - a place that had become familiar to several generations of Soviet soldiers. And on November 15 of the same year, PBC order No. 773 was issued, with which the red star was finally placed on the headdresses, not only of the Red Army, but also of the Red fleet. 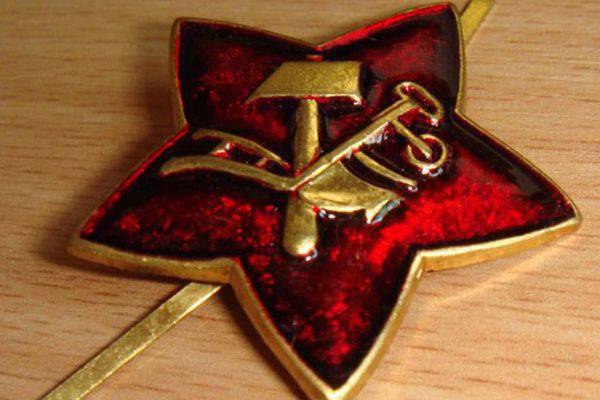 Red star with plow and hammer. Frame: youtube.com
The first enamel red star, called “Mars,” had a characteristic shape. Its rays were thicker than we used to see, and their faces were slightly convex, which made the whole star seem more voluminous. As such, with bulging thick beams, a hammer and a plow, it existed for four years. 13 April 1922, the plow that was considered a symbol of the prosperous peasantry, that is, fists, was replaced by a poor sickle (although this replacement most likely had a more mundane design explanation: the sickle is simpler to portray and easier to understand). Three months later, on July 11, they changed the shape of the star's rays - they were straightened, giving the sign a familiar look.

Very soon, the symbol of the Red Army — the main force called upon to defend the first state in the world of workers and peasants — became both for its defenders and for their opponents to personify Soviet Russia itself. So there is nothing surprising in the fact that in 1923, a red star, but without a sickle and hammer, that is, in its most general form, appeared as a closing element on the coat of arms of the USSR. A year later, a red star appeared on the flag of the USSR, in 1928, it became a sign of the Octobrist organization (instead of a sickle and hammer on it they placed an image of young Volodya Ulyanov), and in 1942, a pioneering badge.

As for the Red Army, in it the red star was not only a distinctive sign, which was placed on headdresses - caps, field caps, helmets and “Budenkovka” helmets, but also part of the insignia. From 1919 to 1924, the year the red star flaunted on the sleeves of all Red Army soldiers, from the detached commander to the front commander. After 1924, the red stars were preserved only on the buttonholes of the youngest category commanders, K-1 (flight commanders and detachments in the ground forces and junior mechanics in the Air Force), and after 1940, only among senior officers, starting with Major General. For the RKKF sailors, the red stars on the cuffs of the sleeves lasted much longer: until the 1991 of the year, gradually changing to gold in all ranks, except for the admiral.

True, in 1969, the armenian stars in the Soviet army returned - but not in the form of insignia, but in the form of an element of armbands indicating the type or type of troops in which their owner serves. It is noteworthy that such servicemen were worn only by servicemen of fixed-term and extra-term service and cadets of military schools - the officers managed without them.

Ctrl Enter
Noticed oshЫbku Highlight text and press. Ctrl + Enter
We are
Born of revolution. The first steps of the Soviet policeRed commanders on the Alley of Mig
Military Reviewin Yandex News
Military Reviewin Google News
63 comments
Information
Dear reader, to leave comments on the publication, you must sign in.