December 23 2015
49
I'm tired! I'm not tired, Crimean Tatars tired! How much can you, sitting in Kiev, shout about what you are saying from the whole nation? What kind of people? Togo, whom you made a food blockade? Or the one who sat without light and water thanks to you? And maybe the one whose children you are agitating to join the Crimean Tatar battalion of punitive? Or maybe your people are the one to whom you threaten a sea blockade? 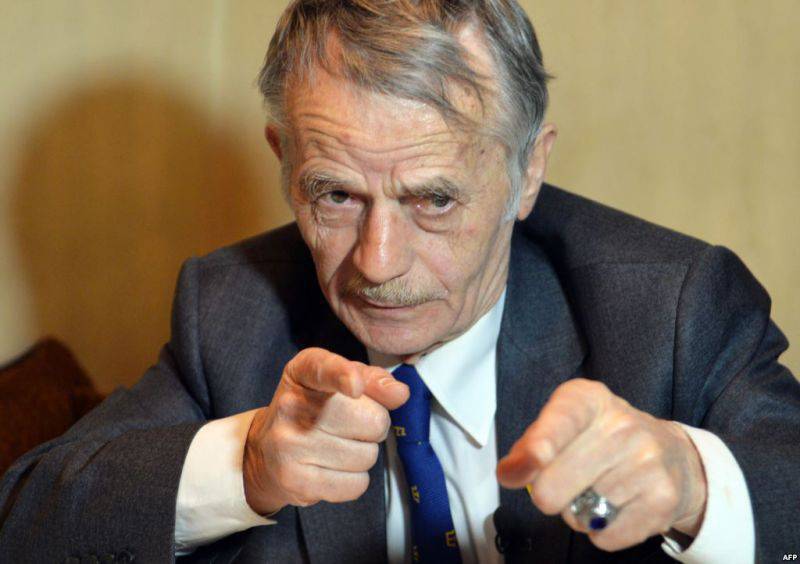 These questions are not for you, reader. These questions are for the great fighters for the rights of the Crimean Tatar people Dzhemilev, Chubarov and other Kyiv guardians of the Crimean Tatars. Almost every day, even though there is no interest in this topic, one of the so-called "leaders" speaks. And the playground is absolutely not important. The main thing is that the media somehow reacted.

The media, especially the Ukrainian, are reacting. Sometimes we react. Sometimes the Western press. Just because the reader, the thoughtful reader, should receive information. And he himself will draw conclusions. Not our task. Not a Khan case, if according to Dzhemilev.

Only here the unexpected happened. Something went wrong with these "civil activists and leaders of the people". Wrong, frankly, went. We somehow got used to the fact that the Crimean Tatars are silent. I mean those who are now developing new lands for agriculture. Those who build new homes. Those who revive the culture of the Crimean Tatars on the peninsula. They are busy. By the way, it is those who seem to be trying to slow down the matter.

But the patience of the people is not unlimited. Yes, and work in the field diminished. Peasant labor is cyclical. Winter is a time of some lull in farms. And questions to Dzhemilev and Co. remained. And people increasingly began to ask them. And most importantly, in the heads of ordinary Tatars, the question arose: "And who are these very" spokesmen of the aspirations "of our people?"

Representatives from the entire December 19 region gathered in Simferopol for the congress of the Kyrym movement. There is nothing supernatural in translation. Just Tatar name of Crimea. And asked this question. The answer was received from them. It happens. When one answers, this is his opinion, but when they answer together, this is the opinion of the group. And if people representing the people answer together, then this is the opinion of the people.

"Rolling Dzhemilev, Chubarov and Islyamov to cooperate with extremist groups persecuted throughout the progressive world deprived them of the right to represent the Crimean Tatars. From now on, all their statements in any forums should be qualified as speeches of private individuals," the resolution adopted at the end of the congress says.

Like this. The Crimean Tatars, those who live in the Crimea, actually expelled this clique from their people. Exactly. Deprived of the right to speak on behalf of the people. In principle, nothing new happened. This practice has existed and still exists throughout the world. No one will say that immigrants from Russia to Western countries represent the opinion of the Russian people. Or Americans who receive citizenship in the Russian Federation represent the opinion of the people of the United States.

Just have such an opinion. Private opinion of the person.

And now that the Ukrainian deputies of a certain nationality will receive in response from the Crimean Tatars. And they will get it for sure.

"When the water first overlaps, so that people cannot plant anything, they starve, the transport communication is blocked, then the food blockade begins, they say," die, "now the energy blockade, it is obvious that it all comes down to destroying."

These are the words of the leader of the movement "Kyrym", the vice-speaker of the Crimean parliament, Remzi Ilyasov. What Dzhemilev and others have been talking about for so long has happened! How many times have these, in short, these and all, spoken about the genocide of the Crimean Tatars? How many times have called for upholding their rights and freedoms? Agreed

Ilyasov said that he would seek recognition of the blockade of the peninsula by the Majlis as a genocide. Ilyasov intends to make a corresponding proposal to the State Council of Crimea. Get it and sign it!

Well, so, gentlemen, ugh, pan Jemilev, Chubarov and Islyamov who joined them? You thought that the people to whom once belonged, dumb cattle? Will he tolerate your antics? It seems that every nation has defective ones? Did you hope to continue to fight against your people and not get an answer? In vain ...

For Crimea today it is important that all nations become Crimeans. Not by registration, not by place of residence. And for the soul. And today, this principle is at the forefront. Today, after what the Ukrainian former Tatars were doing, the Crimeans really became one. This makes me happy.

By the way, the crying that somewhere something is wrong is less. Everyone understands, while not everything that is in Crimea is translated into Russian standards. It is difficult all at once. Although I want to very much. And if you want, it will be done.

Ctrl Enter
Noticed oshЫbku Highlight text and press. Ctrl + Enter
We are
Russia, Turkey and the "Crimean Question"Results of the week. "Peacocks, you say ..."
49 comments
Information
Dear reader, to leave comments on the publication, you must to register.