December 22 2015
26
Once again, an interesting pattern is confirmed:


if it’s about NATO’s combat readiness, it’s about internal information consumption by one or another country, which enters the alliance, the rhetoric looks like this: “We are occupying Russia in a maximum of a week.” An example is the “diplomatic” statement by the Prime Minister of Turkey, Mr. Chavushoglu, made last week;

if it’s about NATO’s combat readiness, it’s started at a general meeting, and most importantly, by military officials of the North Atlantic military bloc, then the rhetoric changes exactly the opposite: “Russia is preparing for anti-NATO aggression! Guard!"

In principle, this logic of representatives of NATO member states in the context of NATO-Russia is quite understandable. The possibility of the "occupation" of Russia by NATO forces is claimed by political camps who are trying to score certain rating points at any cost. But about the fact that Russia itself “can occupy”, it is the military ranks of the alliance with subtext to politicians shout: “Give me money!” In the mode of such a combination of NATO rhetoric, it existed practically from its very first day, except that the Soviet Union

Naturally, such controversial rhetoric of NATO members who are sufficiently strong militarily unnerves the youngonatsev, whose army is most often limited to a couple or three amusing regiments and a dozen armored vehicles units bought from old-timers. The nervous state was once again noted by representatives of the Baltic countries, and it was noted after a new statement by the head of the European command of the US ground forces, General Ben Hodges, that Russia could take the territory of the Baltic "sisters" for several days if desired. According to Hodges, the current state on the eastern borders of NATO is not entirely useless, but close to that, and NATO is unlikely to be able to protect the Balts who broke into the arms of democracy from "Russian aggression."

A similar idea was recently presented by the commander-in-chief of NATO forces in Europe, American General Philip Breedlove. According to him, the eastern frontiers of NATO cannot, of course, be called helpless, but they are “clearly vulnerable.”

After these words, the Baltic natophiles, having clasped their knees with their hands, plunged into hard thoughts about what such statements would be made by the main friends of the Baltic states? In Lithuanian, Latvian and Estonian media there has been a wave of critical statements about this position of American generals. They say that it is you who allow yourself there - “we are in you” (or, more correctly, you have entered us), and therefore let us protect the Baltic States from any aggression.

It seems that historical the desire of the Baltic “elites” to hide behind someone’s back, just to be able to yell piercingly from behind (then this effect is suddenly called “occupation”) prevents these same elites from being at least an honest with their citizens. Indeed, it is clear to any adequate representative of the Baltic society (well, one whose brain has not yet completely turned into a Euro-gel) that American generals are trying to fulfill the financial tasks assigned to them by their statements.

The problem of the Baltic countries is that their military budget, so it happened, does not fall short of the nationwide standards - 2% of GDP. Thus, in 2016, Lithuania plans to develop approximately 1,48% of GDP in the military sphere. Latvian military spending in 2015 amounted to slightly more than 1% of GDP. The leaders are Estonians. They solemnly promise that next year they will even surpass the NATO bar and spend 2,09% of GDP on the defense sector.

It turns out that NATO generals Hodges and Breedlove are such motivators in uniform with big stars. In order not to disappoint the Baltic "partners" at all, they declare that, they say, not everything is so bad for you, guys - even a lot of 30-year-old German armored personnel carriers bought - wow! At the same time, the generals need to somehow unwind the financial pyramid, in comparison with which all the offspring of the Mavrodi are real babble. NATO's financial pyramid - this is “MMM”, like “MMM” ... I didn’t buy “shares” - wait for “Russian aggression”! 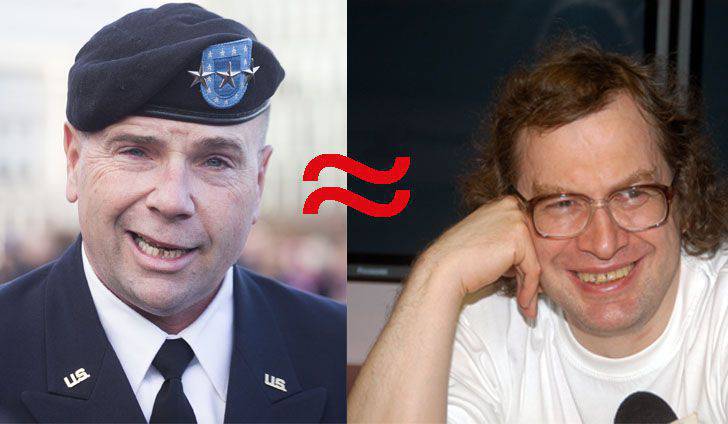 The motivation, as they say, is transcendental, especially if we take into account the fact that the level of anti-Russian paranoia in the camp of the Young Europeans-Youngonatsev is brought by the same motivators to acceptable grades themselves. Now any sneeze of Vladimir Putin is perceived as a veiled order to occupy Vilnius, Riga and Tallinn, taken together, and from there invade Poland and then - according to the extensive NATO list. And if it were not for the valiant Ukrainian army, which, as it turns out, continues to restrain the "hordes of Russian troops" in the Donbas, then the Balts would be morally difficult. That is why, in the Estonian clinics, ghouls from the Nazi battalions of Ukraine are put on their feet, apparently counting on the fact that in the absence of real military assistance from Washington and Brussels, it is these “rebels” who will save the Baltic coast from the “Russian aggression”.

If suddenly one of the Baltic partners gets acquainted with this material, really confident that Russia is about to attack the Baltic States, and that in order to counter the “Russian aggression” in NATO, it is necessary to “list” the 2% of GDP urgently, then allow to make a mini appeal: partners, well, how much can you believe in this, I'm sorry, scam? I don’t know about you, but we in Russia have scammers who send SMS to mobile phones in the style: “Dad (moms, grandfather, women, brother, friend), I have big problems, immediately throw 300 rubles to this number . There is no time to explain. I'll call you back myself. ” The gullible people send ... And since when did you suddenly become so gullible that you are ready to send your taxes only in order for the American generals to have new stars, and the American economy would be able to delay the collapse of their astronomical debt?

By the way, for the Baltic partners, the simple question is: why are the years in the Soviet Union, whose people rebuilt the Baltic republics, turning them from farmstead farms into a huge country window with a demographic boom, universities, theaters, schools, a developed trading system? occupation, and the voluntary-compulsory system of coroners and dues for NATO with the invitation of American soldiers so that they can urinate on the flower beds in the center of the city - is this democracy? Try to answer this question for yourself, and right after that it will become clear why Breedlove and Hodges arrange demonstration horror stories for you ...

Ctrl Enter
Noticed oshЫbku Highlight text and press. Ctrl + Enter
We are
Continuation of the heartbreaking story about the duel "Russia - rating agencies"Turkey against the Kurds. Is there a new phase of conflict ahead?
Military Reviewin Yandex News
Military Reviewin Google News
26 comments
Information
Dear reader, to leave comments on the publication, you must to register.