Where does education go? Russian lawmakers propose replacing or "improving" the exam by IQ tests

December 22 2015
219
The other day, an appeal was sent to the Ministry of Education and Science of the Russian Federation from a representative of the legislative body of relativity innovations in the system of control of students' knowledge and skills (as they say now, competencies) with a view to enrolling in a higher educational institution. MP Mikhail Serdyuk, representing the Just Russia faction in the State Duma of the Russian Federation, states that the Unified State Exam should not remain the only control system that applies to student competences. According to MP Serdyuk, representing in the lower house of voters from the Khanty-Mansiysk Autonomous Okrug, Russian schoolchildren should also be checked for IQ.


Newspaper "News" leads the statement of the State Duma deputy
The talent of Russian children, regardless of geography of residence, family income or social status of parents, is beyond doubt. However, for a full disclosure and further development of innate abilities a systematic assessment approach is needed. In addition, unlike standard test assignments, which still remain the only, but long-lost objective measure of student performance, there is a need for differentiated tests aimed at a comprehensive analysis of their capabilities. 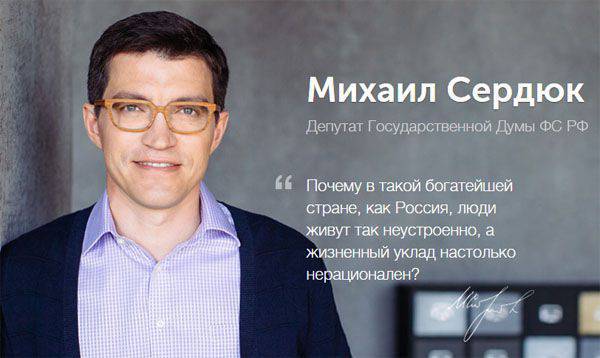 As can be seen from the statement, Mikhail Serdiuk believes that the system of knowledge testing has long since lost objectivity, but at the same time he suggests (at least now) not to refuse such a system, but also to check a student’s IQ on it. At the same time, it is argued that IQ tests over time can become the basis of the very test of students' knowledge and skills, and also a control innovation instead of the so-called unified state exam.

The modern Unified State Examination has really managed to turn into a system that has nothing to do with the actual assessment of a student’s competencies in a particular subject of the school curriculum. The unified state examination is a complex, frankly, it is not always clear by what criteria of the chosen tasks, which is aimed at a unified assessment of the possibility of a student entering a university. And more precisely, it’s not even for an assessment, but for the possibility of adjusting such an assessment to the required threshold.

In other words, the EGE was an unequal replacement for the entrance exams and became no substitute for the final (school) exams. Perhaps, only representatives of the Ministry of Education and Science are ready to argue that the Unified State Exam actually tests a complex of knowledge and skills obtained at school by students, and that the Unified State Exam is designed so that it motivates students to study a particular academic subject in depth. And, perhaps, only the Ministry of Education and Science is ready to prove the unprovable thesis that within the framework of the school curriculum, you can prepare for the same unified state exam so that you can get the maximum number of points. For all the others, the fact that the ministry of an effective manager, Dmitry Livanov, is held only because the scoring results of this “exam” can be used to report on “progress” in the Russian education system, has long ceased to be a secret. Each year, when you pass the indicators, you understand, they grow, but university professors look at these figures in perplexity and at applicants, at applicants, then at figures ... then again at applicants, and they do not understand at the expense of whom the "indicators" grew , and in what region remained those “geeks” who introduced new bonuses to the Ministry of Information ...

Against this background, representatives of the legislative authority of the country propose to walk even in terms of the IQ level of Russian schoolchildren. Like, a large IQ indicator - you need to take to the university, you must give way. Well, if only a small one - at once “hello to the family” - let them figure out where to attach the child with the available indicator of his IQ.

Frankly, it is not entirely clear, why did such an initiative suddenly appear in terms of controlling the notorious competences? After all, even the authors of the IQ tests themselves say that such tests are more suitable for identifying the level of giftedness of children, which may be completely unrelated to the fact that these children pass as part of the school curriculum. Moreover, the scientists who studied the IQ indices of certain people derived a whole formula that clarifies that the talent factor depends to a large extent on the innate parameters - on heredity. In addition, the IQ is affected by the environment and the level of nutrition. That is, the background of the intellect indicator is such that children from wealthy and successful families are initially more likely to show better results than children from the socially unprotected. And despite the fact that high IQ does not guarantee at all that a person who possesses it, will be able (or will want) to realize himself in this or that industry - engineering, production activity, etc.

So, if we assume that the Ministry of Education and Science will suddenly support the parliamentary initiative, then, frankly, it is not entirely clear how the verification of a person’s intellectuality level will be compared with the knowledge that he received during his schooling? Well, for example, is it possible to say that if a student answers IQ test questions? “What number should be inserted instead of a line: 2 5 8 11 _?” Or “Insert the next letter in the series A D A E A Z A L A _”, then his knowledge of mathematics and the Russian language is enough to start studying at a university in a specialty, say, an aircraft design engineer or a pediatrician?

What specifically of the school curriculum is able to check this question from the same test: Which numbered figure should occupy the free space: 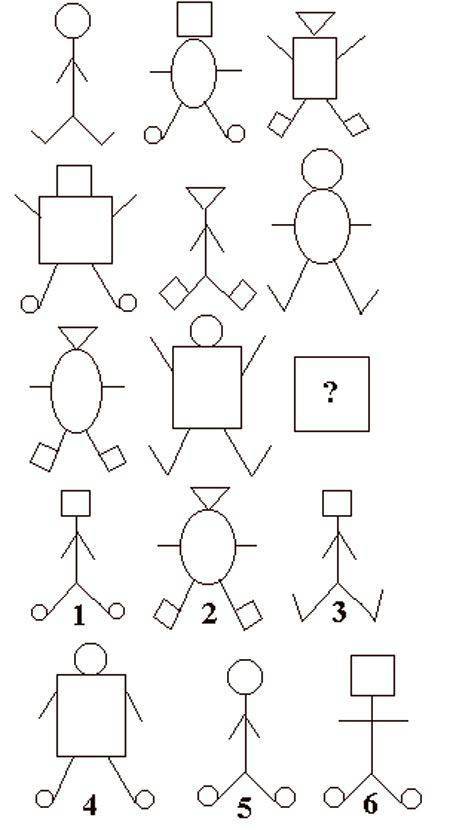 I suspect that the correct answer - New York - as a city, unlike all others, does not have the status of the capital. But this is the case if you look at the question from a geographical point of view. If you look from the linguistic point of view, then Ottawa should be superfluous, if only because it is the only one in this list that starts with a vowel. And if a schoolboy answers that Canberra is superfluous here, since this is the only city in the list that does not belong to a NATO country ... - As they say, who will throw a stone at him and say that he is wrong? .. It is clear that the computer program will exclude both the second and the third possible answer choices, but in this case, where does the level of human intellectual abilities do at all? ..

But what about testing a student's ability to solve equations, calculate the volume of geometric bodies, determine current strength, voltage and resistance in a circuit, or write Russian words competently? Apparently, the IQ test is much more effective as a final check ...

By the way, in the world practice there are many examples when the IQ indicators of outstanding scientists, web application developers, creators of new drugs, famous athletes or actors turned out to be even lower than the IQ values ​​of a regular ninth grader of a completely ordinary school. The great boxer Muhammad Ali’s IQ is 78, and actor Bruce Willis has an IQ around 100. If the experts of our deputies corps joined in, then these individuals would have no chance on the path of self-realization ...

It may be enough to try to invent a bicycle, and it’s time to take real steps to return the education system, which is still recognized as one of the best in the world. And, as they say, where does the unified state examination and IQ?

PS For readers interested in the problems of the modern education system, a report on the situation in the Unified State Exam, voiced by Professor Alexander Ivanov in Petrozavodsk 9 December 2015 of the year:

Ctrl Enter
Noticed oshЫbku Highlight text and press. Ctrl + Enter
We are
Results of the week. "The attraction of unheard of greed!"Inequality in education. Only affordable education will make Russia a strong state.
Military Reviewin Yandex News
Military Reviewin Google News
219 comments
Information
Dear reader, to leave comments on the publication, you must to register.