December 22 2015
35
Last Friday, the UN Security Council voted for a resolution on Syria. The document was adopted unanimously. It provides for the drafting of a new constitution and contains a roadmap for resolving the situation. The leading role in the organization of the negotiation process is assigned to the UN. The resolution also provides for the holding of presidential elections in Syria, to be held within eighteen months from the beginning of work on the drafting of the constitution. 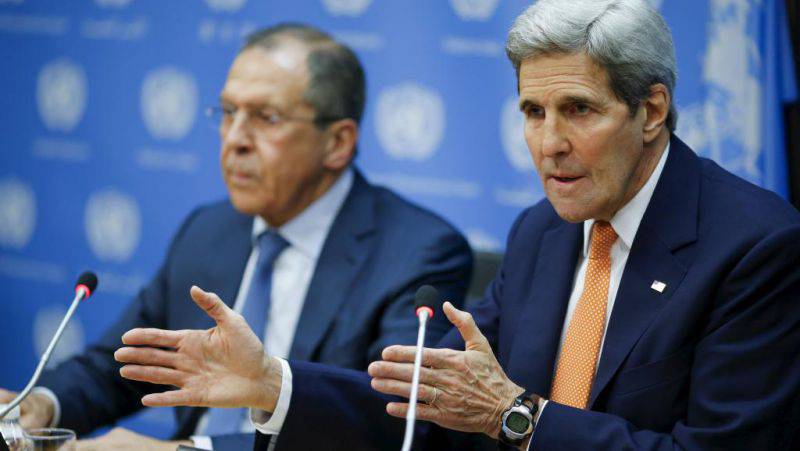 The text was prepared by an international group headed by two co-chairs - Russia and the United States.

This resolution was the first and so far the only document on Syria for the entire period of the civil war, which the negotiators were able to agree on in the UN Security Council.

In accordance with the adopted document, a transitional government will be formed in Syria over the next six months. According to the plan of the UN Security Council, it should represent "all parts of society." The organization of the negotiations rests with the United Nations.

Elections in Syria in accordance with international standards and under the supervision of the UN must pass within eighteen months. All this time, the international group in support of Syria will continue to conduct its work on a cease-fire and finding ways of a political settlement in the country.

"Vedomosti" provide an assessment of the new resolution by leading world politicians.

According to UN Secretary-General Ban Ki-moon, the resolution should be considered "success."

The adopted document establishes the right of the Syrian people to determine the future of the country, said Russian Foreign Minister Sergei Lavrov.

US Secretary of State John Kerry believes that a cease-fire in Syria may be announced as early as January 2016.

The publication recalls that the draft resolution John Kerry brought to Moscow 15 December. President Putin generally supported him, calling him "acceptable." Putin himself said this at a December 17 press conference. According to him, the resolution should arrange and the Syrian authorities.

Already identified and those who are not satisfied with the document. This is not Assad, but the so-called Syrian opposition. As they write “Vedomosti”, its representatives criticized the adopted text. In their opinion, the resolution undermines the outcome of the negotiations of opposition representatives in Riyadh and reduces the value of previous UN resolutions to resolve the conflict. So tweeted the head of the West-backed National Coalition of Syrian Opposition and Revolutionary Forces, Khaled al-Hoxha.

“Syria must remain a single secular multi-religious political state, comfortable and safe for all groups of the population, and only the Syrian people themselves have the right to determine their future,” the “First” quotes Sergey Lavrov.

“The agreement reached gives the Syrian people a real choice not between Assad and ISIL, but between war and peace. When I was in Moscow, President Putin confirmed that Assad was ready to participate in the political process, ready to cooperate on the formation of a constitution, to prepare elections, ”said Kerry.

“You know the name of the film“ Mission Impossible ”. So, the mission becomes potentially feasible thanks to what we saw today. Unanimous support in the UN Security Council confirms this. The process will be difficult, but hope has emerged, ”said UN Secretary General Representative Staffano Mistura.

RBC notes that the resolution does not have an exact date for commencing work on the constitution and not mentioning whether Assad can run for election.

In the West, they still consider Assad a war criminal responsible for the deaths of tens of thousands of people, and Moscow and Tehran see him as a key regional ally. On the other hand, over the past few months, in view of the struggle with the "IG", the positions of the parties are converging. Not without reason, at a meeting with Sergei Lavrov, the US Secretary of State said that the United States and its partners "are not looking for a regime change in Syria." And yet, ultimately, Washington does not want to see Assad in power in Syria.

“The Secretary of State clearly spoke when he said that Assad does not have the opportunity to lead the future Syria. He noted that no one should forcibly choose between a dictator and terrorists, adding that the challenge remains to us how to create such conditions so that an alternative appears to this, ”representative of the US Embassy William Stevens told RBC.

It is difficult to say what Russia thinks about this, let us add. We already brought on "IN" one Reuters publication. Sources of the agency in diplomatic circles claim that the Russians “made it clear”: they are ready to agree to Bashar al-Assad’s resignation from the post of Syrian president. At least, this “readiness” of the Kremlin is confirmed in “private conversations”. Some Western officials believe that there is a possibility of a similar compromise between the West and Moscow.

At the end of the “compromise”, Assad is leaving, said a high-ranking Western diplomat, who spoke to journalists on condition of anonymity. According to him, “in private conversation,” the Russians accepted the point of view that Assad would resign at the end of the transition. True, Moscow is not yet ready to make a corresponding statement publicly, he explained.

In any case, let us add on our own, one can only guess at this topic.

Some world analysts believe that the resolution shows: Moscow was right regarding Syria.

"InoTV" cites the opinion of the Algerian newspaper "L'Expression". According to the publication, the approved resolution on Syria shows: Putin was not mistaken in his policy, eventually forcing the world to reckon with Russia. True, Saudi Arabia and Turkey are still interested in continuing the war in the Middle East.

The adopted resolution shows that Russia was right. Putin won an international contest. "You can not change the model of life on the planet without the consent of Moscow, which put an end to the unipolar world," writes the publication.

Iran has the right to rejoice. After twelve years of economic sanctions, Tehran returns to the international arena.

But Saudi Arabia document "lost nose". Another “side victim” of the resolution is Turkey. Russia has proved how the Turkish authorities are helping the IG militants to sell oil, the newspaper said.

There are also the opinions of Russian experts on the resolution adopted by the UN Security Council.

As the vice-speaker of the State Duma, a member of the Duma committee on international affairs, Nikolai Levichev, noted, the adopted resolution was a great success for Russian politics. The approved document lays a solid international legal foundation for a Syrian settlement and creates the prerequisites for the formation of a broad antiterrorist coalition.

“The resolution of the UN Security Council on Syria is a great success of the Russian policy, the cumulative result of the efforts of our president, diplomats, the military, and all those who are today involved in solving this acute international crisis. The resolution creates a solid international legal foundation for the Syrian settlement process, ”Mr. Levichev said RIA News".

According to the deputy, the adoption of the document was an important milestone in a civilized solution to the conflict after the Vienna agreements and the solution of the problem of chemical weapons in Syria. According to Levichev, the resolution is an important step towards the "formation of a unified and broad anti-terrorist coalition."

The expert believes that the resolution is also an unconditional victory of the Russian approach: “It’s about the unconditional victory of the Russian approach, at the head of which is the leading role of the UN in world affairs as the cornerstone of the modern international security system, the inadmissibility of interference in the affairs of other states, including to change governments, the sovereign right of the Syrian people to determine their own destiny, the inadmissibility of double standards in the fight against international terrorism, attempts to divide terrorism Comrade on the "bad" and "good."

Thus, we add in conclusion, for the first time during the civil war, a collective international document on Syria was born, which was fully agreed upon in the UN Security Council. The unanimous "yes" says a lot.

As for the fate of Assad, the adopted resolution, which does not clarify other details, does not establish its direct “departure.” Obviously, this issue will be discussed more than once at the highest level.

It can be said that this time the American version under the motto “Assad must leave” did not go to the UN. And this is the merit of Russia.

Observed and commented on Oleg Chuvakin
- especially for topwar.ru
Ctrl Enter
Noticed oshЫbku Highlight text and press. Ctrl + Enter
We are
Results of the week. "The attraction of unheard of greed!"Kuriles - an integral part of our homeland
Military Reviewin Yandex News
Military Reviewin Google News
35 comments
Information
Dear reader, to leave comments on the publication, you must to register.