December 21 2015
85
Billionaire Donald Trump, a potential candidate for the presidency of the United States, said that if Vladimir Putin respects him, moreover, he is ready to recognize him as a “brilliant” figure, then he will accept it. Not personally, but on behalf of America. Such an ambitious statement was not born from scratch. As the Western press recalls, December 17, Putin called Trump "a very bright person, talented, without a doubt". American analysts are confident that the Kremlin boss favors Trump for a reason: the goal of the Russian leader is to destroy the United States with the help of a Republican villain, a clown, xenophobe and a destroyer. Some observers see this as a billionaire. 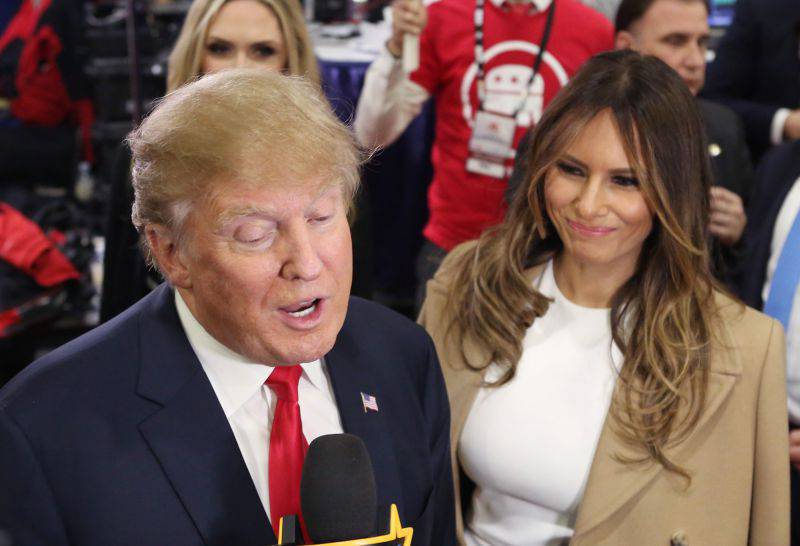 Recall, December 17, Vladimir Putin, said he was positive about Donald Trump's intention to raise the relationship between the United States and Russia to a new level: “He says he wants to move to another denser level of relations. Can we not welcome this? Of course, we welcome it. ” In addition, Putin called D. Trump a bright and undoubtedly talented man.

Billionaire did not stay with the answer. According to him, such a high assessment is a great honor: “It is always a great honor to receive a compliment from a person who is respected not only in his own country, but also abroad.”

As reported late in the evening on December 20 "Lenta.ru", the contender for the US presidency, Donald Trump said on the air "ABC" that he was ready, if elected to the presidency, to get along with Russia and Putin.

According to a potential candidate, if Vladimir Putin respects him and wants to call him a brilliant man, he will accept it on behalf of his country.

In addition, the politician praised Russia for his contribution to the fight against the "Islamic State". "If Russia wants to bomb the hell out of IG and join us in this, then I’m entirely for it," he said. He added: "If we get along well with Russia, then this is a positive thing, not a negative one."

This kind of courtesy on both sides - from Trump and Putin - gave American journalists a reason to look at one important futurological question with a magnifying glass. What awaits the United States, if Trump is elected president, and he will get close to Putin?

In the American edition "BuzzFeed" an article by the editor of the department of world News Miriam Elder, entitled "This Is The Real Reason Putin Loves Donald Trump." As is clear and without translation, the material is dedicated to identifying the true cause of “Putin's love” for Donald Trump.

The author also recalls the words of Putin, who called Mr. Trump "a very bright person, talented, without any doubt" and "the absolute leader of the presidential race" in the United States. Not without irony, Miriam Elder notes that D. Trump accepted Putin’s compliments on the same day, and he did it twice: speaking on Fox TV and giving an interview to the MSNBC channel. And in the latter case, Trump ignored "questions about the murders of journalists and critics of Putin in Russia." To this, Trump replied: "In our country, too, many are killed."

Miriam Elder, apparently, knows exactly the reason why the Russian leader wants to see Trump in the role of US president. Putin is pursuing his geopolitical interests: he, the author of the article believes, knows how to deal with a billionaire, with this straightforward type, in which all “human rights” and “armed invasions” in the White House will fade into the background. What is important for a billionaire? Right, business. That's what Trump will do. In this journalist, obviously, catches his similarity with Putin. And another thing: in her opinion, Putin and Trump are similar to others: both look like “macho” and tend to authoritarian style of government.

But it's not just about the similarities, business, and autocracy. The main reason is below.

Putin is showing “sympathy” for Trump for his own benefit. The Kremlin is on the beaten dark path. These technologies are already run in by Russians "in other countries." Putin discovered a new tool for influencing a strategic adversary.

If in France, the far-right National Front party received a loan from Russia, in Greece, officials and billionaires close to Putin became friends with the ultra-right party SYRIZA, and the leader of the ultra-right United Kingdom Independence Party, Nigel Faraj, was often in Russian television, then an unpleasant picture emerges: supporting similar parties in Europe, Putin plans to weaken the European Union. The EU is not the limit. Closer to Trump, Putin dared to shift his strategic approach to the USA!

Trump, this insolent type, this xenophobe, this circus performer, has reached such ugly statements in his rhetoric that Washington has become an object of ridicule all over the world, the author believes. And every week this clowning continues. Everyone wonders what a catastrophe it will lead to. They have not yet guessed, and Putin has already realized: it is necessary to extract political advantage from the chaos in the USA. The Kremlin boss only supports Trump because Trump is a “threat” to the United States, according to Miriam Elder.

However, analysts from Europe strongly doubt the strategic strength of Putin. In particular, some Germans deny Putin even the ability to be a strong leader.

According to the journalist, at the annual press conference, Vladimir Putin "has built himself a strong leader, but he is not." The author finds the speech of Putin as an actor, the face of the Russian leader is called a “mask”.

Jacques Schuster writes that Putin’s press conference is only suitable for the public to learn: Russia is Hoo, and the Kremlin boss is the only one who is able to influence the fate of the country. “Putin is the lead actor in this great performance,” the commentator said. - His face is smooth and resilient, it is pink, and looks like a wax. The mask is made in the cosmetic kitchen of the Kremlin. It may temporarily give the impression of thoughtfulness or belligerence, and yet it is only a mask. ”

Putin needs such “cosmetics” for propaganda: he is aware that his voters “want to see the image of a warrior with the head of the Kremlin”. He caters to the public, but forgets that "strong power behaves quietly, and making noise is the lot of the weak."

The journalist reminds that in 2015, Russia has visibly manifested its weakness. The economy hit oil prices - after all, it is she who serves as the main source of government revenue. And there is no confidence in the price increase next year.

Inside the impoverished country, Putin has nothing to please the electorate with; It remains to flaunt in the field of foreign policy. A typical autocratic tactic, says Schuster. After all, those who become poorer, should be "intoxicated by the dope of victories." It was a dope, since the Kremlin has no real victories either.

In Syria, Russia is likely to suck in the “Middle Eastern whirlpool” (obviously, a hint of a “new Afghanistan.” - O. Ch.). In Europe, Moscow is still isolated. Washington, as before, does not take it seriously. In the face of Ukraine, Russia has acquired an eternal enemy. Finally, spending on military operations: they eat up billions of rubles, and there’s no place to take them ...

There is a slightly different view on the "weakness" of Moscow. American look. It is stated in the journal column "The American Interest".

The news is about Ukraine’s probable non-payment of Russia's debt, despite the fact that the IMF recognized this debt as sovereign and recommended that Kiev “without fail” review the terms of payment with Moscow. However, instead, Arseniy Yatsenyuk announced his readiness to "fight in court." It turns out that Ukraine will not pay Russia if the latter does not agree to the Kiev conditions proposed earlier. The payment deadline expired on December 20, with the default in Kiev coming ten days later when the interest-free repayment delay period ends.

“The American Interest” believes that debt differences between Ukraine and the IMF are “a serious victory for President Vladimir Putin.”

According to the publication, Putin’s geopolitical goal is to be able to create “unrest” in Ukraine “at any time”. The goal of the Kremlin is a faltering and divided Ukraine. On this “front,” the newspaper notes, the Kremlin is achieving “amazing success.”

Whatever the Kremlin does, everything leads nowhere. And from the chaos, which everywhere, including in its own country, Moscow reserves for itself, can get pretty well the USA. This is today's leitmotif of the Western press.

Chaos and propaganda noise - only the Kremlin has succeeded in this. But the noise and chaos of him and destroy, because both speaks of weakness. In Syria, Russia will get bogged down, Ukraine has made the enemy for many years, in Washington they laugh at Moscow, and Europe continues to “isolate” and sanctions. As for domestic policy in Russia, the Kremlin’s weakness is evident here: the people in the country are getting poorer and eat, apparently, only propaganda.

If in the United States they elect President Trump, and Putin converges closer with him, chaos will also come to the great democratic America. These two - Trump and Putin - will start doing “business” and forget about “human rights”. Today, American citizens watch Trump's circus acts, and tomorrow they will get a real disaster.

Ctrl Enter
Noticed oshЫbku Highlight text and press. Ctrl + Enter
We are
Overseas ally? Donald Trump - US Presidential CandidateSituational analysis of the death of the MH17 flight (Malaysian Boeing 777), made on the basis of engineering analysis from 15.08.2014
Military Reviewin Yandex News
Military Reviewin Google News
85 comments
Information
Dear reader, to leave comments on the publication, you must to register.