December 21 2015
26
Devices for firing from small weapons because of all sorts of shelters for a long time do not give rest to the inventors. Back in the years of the First World War, specially created periscope rifles, which allowed soldiers to fire without leaving a safe trench or trench, remaining inaccessible for return fire from the enemy, got their way into life. Later, both in Germany and in the USSR, weapons were developed with a curved barrel or with the use of a special kinky nozzle, which was intended for firing from around the corner, from various fortification devices or military equipment.


It is worth noting that the First World War largely initiated development in this direction. Turning to the positional stage, she forced the designers to think about creating a weapon that allows firing with “indirect” aiming. Similar developments have appeared in almost all armies that took part in this international conflict. A striking example of such a weapon was the French trench rifle, created on the basis of the Lebel Mle 1886 rifle. On this weapon, they decided to replace the usual straight butt with a special double-curved, also on the rifle two mirrors appeared on the brackets, which formed the simplest periscope. The shooter sent the cartridge into the chamber, locked the bolt, set the rifle on the forearm on the parapet, then through the mirror system looked at the scope and front sight of the rifle. Such devices did not receive special distribution.

During the Second World War, this kind of development was returned again. So, at the end of 1943, the German company Rheinmetall received an order to develop special tools - warped barrels, which were planned to be used on all standard Wehrmacht weapons, designed to use the 7,92XXNNXX mm machine-gun cartridge. These devices were designed to reduce dead zones from a distance of 57-150 meters to 200-15 meters. The first such sample of the special nozzle on the barrel (Krummerlauf, German - curved barrel) was intended for the Mauser K20k regular rifle. An experienced barrel, bent at 98 degrees, had an inner diameter of a smooth channel of 15 mm, and an outer diameter of 10 mm. At the same time, the results of shooting from him were considered unsatisfactory.

Realizing that the rifle ammunition does not fit, the German designers turned their attention to another cartridge - the 7,92x33 mm, the so-called "intermediate" cartridge; its bullet was shorter and the muzzle energy was smaller. The tests have shown that such ammunition is better suited for such structures, and only assault rifles that have just started to appear in the German army are better suited for a curved barrel. In fact, they became the only weapon model where such a barrel mattered and could be put into practice. In July, an 1944 assault rifle MP.43 with a nozzle on the barrel curvature 90 degrees showed the top leadership of the Wehrmacht. In the first embodiment, the rifled barrel had several venting openings. At the same time, during tests and shooting of such a machine gun, equipped with a curved barrel-nozzle, the shooting accuracy was considered quite satisfactory. When firing single ammunition at a distance of 100 meters, the dispersion was within 35 cm, and the survivability of such a lining on the barrel was about 2000 shots.

After the end of the Second World War and in 1950-s, such developments were again not in demand and lost their relevance. Again they were remembered only at the end of the 20th century, when various special forces units needed means to fire and monitor the enemy from behind the shelter. Such devices could be very useful during assault operations, for example, when freeing hostages from buildings, vehicles, etc. captured by terrorists.

In many ways, the issue of “firing around the corner” again became relevant precisely because of the growing terrorist threat. Conducting counter-terrorist operations, as well as the fight against well-armed and equipped criminals have become relevant for almost all states of the world. Local conflicts as well as fights in urban development among a large number of civilians, where there is often no possibility of using full artillery support, have become commonplace, and using grenades is not always convenient. In addition, the attention paid to the personal safety of soldiers has increased all over the world, which means that demand has reappeared for systems that would allow firing from around the corner, shelter, without exposing the shooting soldier to unnecessary risk. 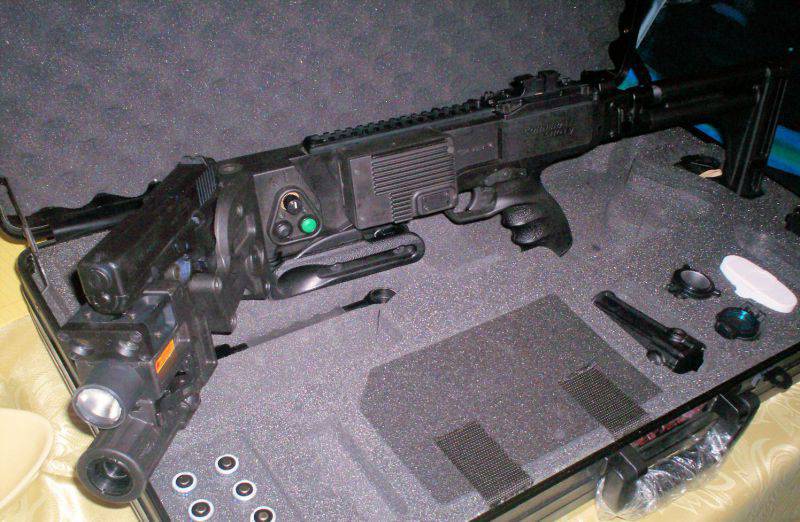 One of the prominent developments in this area was a system called "Corner Shot", which was created by Amos Golan, a former Israeli special forces officer, and the name of this system became a common noun. This device was a special rotary carriage, equipped with a video camera. It was easy to attach pistols of various caliber and other weapons, as well as a variety of non-lethal weapons, which are becoming increasingly popular, and various optoelectronic devices and devices. Despite its narrow scope, Corner Shot devices have become popular in many countries around the world. They are used by special forces in Azerbaijan, Israel, India, China, Mexico, Russia, the United States, and South Korea. Analogues of such a device for small arms were developed in India and Pakistan.

In this case, Chinese engineers would not have been Chinese engineers, if they had not attempted to develop a similar design. They decided to call their own project “Change-Line-Free Shooting Tactical System”. For the first time the Chinese development was shown at the 4-th exhibition of police weapons China Police Expo (CIPATE). It is reported that the device was created under the direct supervision of chief designer Qin Hanseng. It was presented in two versions: low-tech model CF-06, which is an optical-mechanical design and high-tech model HD-66, equipped with a video camera. In fairness, it is worth noting that both Chinese developments presented are not exact copies of Amos Golan’s Israeli invention, but have become their own. Of particular interest is likely to be a simpler model CF-06, which should cost several times cheaper than the more complex Israeli Corner Shot, which sells for approximately 4-5 thousand dollars.

The Chinese device "Change-Line-Free Shooting Tactical System", developed and manufactured by Sunlonging Photoelectric & Technology, is a platform carriage equipped with a pistol grip, shoulder rest, and an optical sight. It is equipped with a special rotary module, which is used to mount a pistol type QSZ-92, caliber 5,8x21 mm or 9x19 mm, while the manufacturer claims that other types of modern pistols can be used with the product. A periscopic lens was mounted on this module, and other accessories in the form of a tactical flashlight or a laser designator can also be installed. The Chinese module is able to rotate in both directions at an angle of 90 °. At the same time, the used optical sight has a variable magnification ranging from 1 to 4 times; sight field of view - 4-16 °; the exit pupil diameter is 5-9 mm, and its distance from the eyepiece is 70-76 mm. The total weight of the entire device is 3,85 kg. To facilitate transportation in the stowed position, the stock and sight can be easily removed.

Already now we can say that the development of the "Change-Line-Free Shooting Tactical System" from Sunlonging Photoelectric & Technology will be of interest not only to representatives of law enforcement agencies, but also, due to its simplicity and affordability, will be attractive to fans of airsoft.