PR and EP - twins, or How Ukraine is similar to Russia? 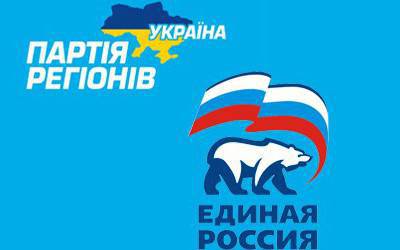 The processes that concern Russian society today as a manifestation of the crisis are quite understandable. But, as in any situation, there are certain nuances that make you wonder whether you want it or not.


It made me think about some similarity in the actions of the above political associations. "Party of Regions" and "United Russia". Indeed, these parties have a lot in common. Starting from the actual status of the "party of power", ending with actions, after which the term "former" is applied to the Ukrainian colleagues. Former deputies and officials of the former party of regions.

What did I actually find together with a group of like-minded people from Ukraine?

Go back to the 2012 year. When the Maidan and its consequences were born. But it was born precisely when the PR won the elections to the parliament. Yes, such a total superiority, like the EP "regionals" did not have, however, their capacity was enough to send the Tymoshenko team to resign.

The fact that the original acts of the "regionals" and led to the fact that the people began to openly express discontent is indisputable. Only the one who believes that the Maidan was organized by the "pravoseki" will argue. Alas.

Maidan 2013 of the year was economic. At its very beginning, politics did not even smell. The 2012-2013 years were years of hefty tax increases. Up to the point that they tried to impose on 13% extortion transfers from abroad (consider - from Russia). With a general decrease in the rate of income tax, excise taxes and state duties increased. Plus, the introduction of an advance income tax system played into the hands of those who Maidan. For there were many dissatisfied.

We have already forgotten how maidan started in 2013. And it began with the requirements of a purely economic plan. And gentlemen such as Tyagnibok and Lyashko clearly said "get out!" It was about completely different problems than the problem of language and "klyutyh ..." Everyone was replayed in the course of the play by the production directors. The result is known.

Was the first maidan manifestation? Definitely not. Speeches against outright lawlessness of corrupt officials and government representatives were all 2013 year. More precisely, the whole second half. A start was made by the events in Vradiyevka. The culmination was Kiev. The people really began to rise against the lawlessness, and they were actively supported by the journalistic corps.

Although, to be honest, Yanukovych, and his patrician party members, did a lot for the Ukrainians to rise. And more was not done. Who, tell me, prevented Yanukovych to disperse (again, I note) Maidan, and then go out to the people, ask for forgiveness, demonstratively plant a couple of highly presumptuous princes on the ground, drive out a couple of ministers, launch several social programs ), to start fighting corruption is real, and not in words. What would not forgive?

Parallel events have a place to be with us. It is not necessary to prove that corruption in Russia already sometimes sometimes takes ugly dimensions. Everything is up to date. The only question is one. If you do not take measures to curb the outrages that are happening on the ground, there will be forces that will willingly take advantage of the situation.

The freshest example is the "strike" of truckers. Strange strike. Fifty trucks in two parking lots. The rest parted. The rest need to work. Despite the fact that "Plato" no one will cancel.

One of the participants of the protest rally, Yevgeny Staritsyn, told media representatives that the presidential statement can be interpreted in the vein that none of the government structures intend to cancel this system of fees, therefore its specific future raises questions. “According to the president, I remained unemployed. My children will now be hungry, my wife does not work, there is no work. One way out remains after such a presidential message: I will come, buy soap, a rope, I will put the children on first, then myself.”

Peculiar approach. Comment is not worth it, just go to the site http://ati.su/ and see how much truckers cost today. Words about hungry children seem somewhat ... insincere. Yes, if you sit in the parking lot and do not work, then you might think about hungry children. But for some reason it seems to me that the Staritsyn family is all right. Some force will not let his family die of hunger. And this power has the opportunity to take care of the strike participants in 49.

Let's just say the power is not very powerful yet. But the Right Sector also once seemed a bunch of nationalist clowns. December is not yet 2013.

On the other hand, protesting dalnoboev can be understood. By and large, they were not to blame for the burden they imposed on them. Indeed, thousands of trucks ride around Europe and America in the same way. But the roads are not the talk of the town.

And the recipe is simple: if in Russia you spend 90% of the planned amounts for road repairs (10% are stolen, but this is already a national tradition), and not 40-50%, then you will not have to strangle anyone with taxes. After all, they are strangling by and large not truckers, they are already 15% in their prices in their rates. They stifle us, those who will buy products that have risen in price by exactly 15%.

Who is to blame - also known. This year in Voronezh, we have the case of the head of the Voronezh Regional Highway Administration, Alexander Trubnikov, who was detained while receiving a bribe in 1,25 million rubles. And during a search in the garage, he found in boxes about 140 million rubles. This is an example. An example of an ordinary official, of course, a member of the "ER".

Strange, yes? Officials throughout Russia take such amounts, and we pay what they stole, we. Or maybe the calculation? Until they yell at rallies - you can sleep, or rather, steal easy. And if the usual regional leader rowed so beautifully, what was going on in the upper echelons? One can only guess.

I'm all for what? And the fact that the grain Maidan in Ukraine sank into a very fertile soil. In the country, however, such a crisis, as we have, was not. Only scheduled. But it turned out. Will you say that there are no "guardians" around Russia who want to do the same?

Yes, in Russia there seems to be no personalities like Tyagnibok, Avakov, Turchinov. This is a plus. But this absolutely does not mean that the “one” should step on the “regional” rake. And to continue with success the work of labor in the field of personal enrichment begun over the years. Buy exclusive cars, carry your bodies on VIP airplanes, write out multi-thousand premiums for yourself on holidays. In the country, they say, the crisis. And to please the people with new taxes and fees. I don’t know where it’s like, but in the Voronezh region entrepreneurs were “pleased” with the fact that they raised “imputation” from 1 in January by 15%.

Yanukovych and the company did not want to think. The result was today's Ukraine. And the former comrades-in-arms of Yanukovych in the party feel quite comfortable in other party blocs. In Russia, everything is relatively calm.

Today makes us think about how similar the situation is today in Russia with the situation in Ukraine in 2013. And conclusions need to be done today. Tomorrow there may not be enough fiery speeches, because you will not connect the duroscope to the refrigerator. And the demonstrative "shootings" of individual governors or officials will not calm anyone down. Because the majority understands that they planted far from everyone who would be worth it.

Ukrainian Maidan in the past. And do not forget that it was not only scumbags with chains and bats who went to him. They just came later when the main thing was done. Maidan in Russia at one of the forks of the future. The future, which will determine not only power, but also the people. I would not like to see in the Russian Independence not representatives of some kind of opposition, but ordinary people, driven to despair.

After all, the most disgusting thing about this is that the bulk of United Russia will instantly evaporate - who is in a certain direction and who is not. In the house, or apartment, away from the fire. How it made a lot of their colleagues in Ukraine.

Dear our United Russia (and you really do cost us dear), isn't it time to think? We do not want Maidan. And you?

In essence, the article is correct, because, firstly, the PR and the EP are parties created by the nomenclature and serve only the interests of the state, but not the people, this does not mean that it is bad or good, it is just a fact. Another question is that often these interests do not coincide; here it is already necessary to look at who is the beneficiary of those or other interests. Since the power is heterogeneous, and lobbying of certain groups in power can be either benevolent or destructive for the country. Secondly, paradoxically, the two parties have fundamental differences - Putin has never stood at the head of the UR, he gave UR ​​the right to use his authority to win some support from the population, but formally he is not the party’s leader. Therefore, now there is no direct association between the president and the parliamentary majority. Maidan in this situation is hardly possible, just one simulacrum in the form of EP will be replaced by another, for example, in the form of ONF.

Ctrl Enter
Noticed oshЫbku Highlight text and press. Ctrl + Enter
We are
Situational analysis of the death of the MH17 flight (Malaysian Boeing 777), made on the basis of engineering analysis from 15.08.2014Memo to mercenaries in Africa
Military Reviewin Yandex News
Military Reviewin Google News
80 comments
Information
Dear reader, to leave comments on the publication, you must sign in.