From the cycle "overpowered chi zrada". Visa-free ice breathing with the EU

December 21 2015
132
At the end of last week, the Ukrainian political, God forgive me, the establishment together with the most otmaydanenny media jumped literally to the ceiling. The reason for the next race is related to the statement of the European Commission, in which it was said that Kiev fulfills its obligations under the terms of the abolition of the visa regime, and that the EC considers it possible to introduce a visa-free border crossing of the EU countries already next year. To say that in Kiev such a statement by the representatives of the European Commission was called “Peremogy” - to say practically nothing. 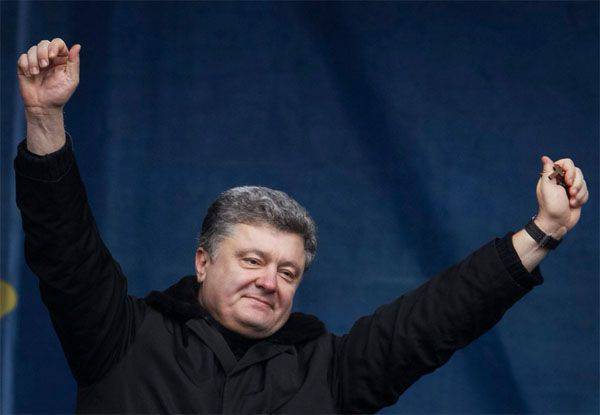 It should be added that the European Commission expressed similar words about “the likely introduction of a visa-free regime” to Georgia.

In the meantime, a real carnival reigned in the Ukrainian media, in the European media they decided to issue materials explaining more to the Europeans themselves that the visa-free regime for the visa-free regime was different. The reason for the publication of this kind of publication is that, to put it mildly, not all European citizens perceived the statement of the EC representatives with obvious enthusiasm. The Europeans said that the EU, even without the presence of Ukrainians and Georgians, is suffocating from refugees and displaced persons (primarily from Africa and the Middle East), and the abolition of visas with these countries can only contribute to aggravating the migration crisis that has engulfed Europe. As a result, European publications had to proceed with the urgent publication of materials concerning what exactly the visa-free regime with Georgia and Ukraine is, and why Europeans should not be afraid of such a decision. One of these materials was voiced by a German radio station. Deutsche Welle.

German journalists confirm that visas for citizens of Georgia and Ukraine can be canceled in the summer or autumn of 2016, and in the event that all countries of the European Union, without exception, support the European Commission. If at least one of the EU countries has doubts about the expediency of abolishing visas for Georgians and Ukrainians, then the visa regime will continue to operate - until the next meetings on the same issue.

At the same time, the European Union has already made it clear to Kiev and Tbilisi that the abolition of visas for citizens of these countries (if abolition occurs at all) will have a number of restrictive principles. So, in the event of the abolition of the visa regime, Ukrainian citizens will theoretically be able to get on the basis of an internal passport not in all EU countries. Completely ignore the initiatives of Brussels in London and Dublin. That is, the citizens of Georgia and Ukraine will be able to get to Britain or Ireland only when they issue visas at the embassies of these countries.

By the way, about the internal Ukrainian passports. In Brussels, they said that in the future only Ukrainian and Georgian citizens who will acquire biometric passports are ready to let in. As the President of Ukraine Poroshenko was informed during his visit to the printing plant Ukraine, in the near future millions of biometric passports (ID-cards) will be issued for Ukrainian citizens. Printing plant is included in the structure of the National Bank of Ukraine, headed by the notorious Valeria Gontareva, which, with an official salary in 12 thousand UAH. reported income in the amount of 3,85 mln. per year and the presence of three cars Infiniti FX35, Porsche Panamera and Porsche Cayenne. The transfer of millions of Ukrainians to biometric plastic cards — one of the requirements of the European Union — clearly replenishes the personal budget of both Ms. Gontareva herself and the oligarch President Poroshenko, who expressed satisfaction with the process of stamping new Ukrainian documents. 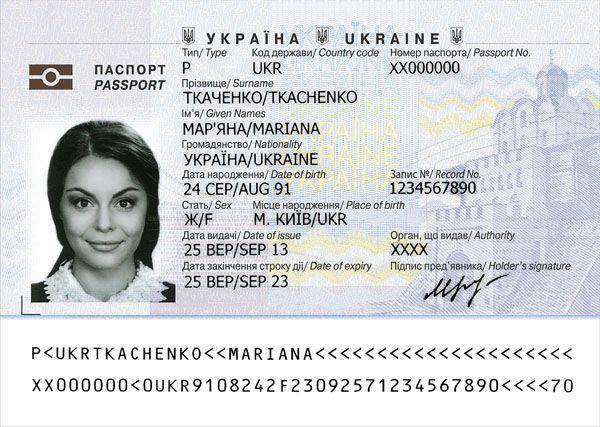 Restrictive measures for Ukrainian and Georgian citizens also relate to their stay in EU countries. If a visa-free regime is ever introduced, the same Ukrainian citizens will be limited to stay on an internal passport in 90 EU countries for days. At the same time, it is immediately added that such citizens cannot work in the EU. To work, you will need to receive a separate permit, the cost of which (the simplest) starts from Euro 380 for the same three months. Moreover, if a Ukrainian citizen intends to cross the border of the Schengen zone just for work, then the European Commission says that he will still have to get a visa. And if we consider that the abolition of the visa regime in Kiev was seen primarily as an opportunity for European employment, it is completely incomprehensible what the positive effect of the EC’s peculiar initiative to abolish visas with Ukraine is in reality if you work without a series of permits ...

Ukrainian and Georgian citizens will not be able to get an education in the EU if visas are so peculiarly canceled. The fact is that Brussels made it clear right away: it is possible to study without a Schengen visa only if you complete any short-term courses (for up to 3 months). In all other cases, you will have to get a visa and an appropriate permit (not free, of course).

This is not all, with which the hypothetical abolition of visas for Kiev and Tbilisi is connected. Deutsche Welle “For the future” reports that any Ukrainians who find themselves without a visa in a particular EU country, representatives of the police or migration service have the right to ask for travel documents (a train or plane ticket), including the date of departure departure, if such the person went to the EU for about half the maximum allowed period (ie, 45 days). In addition, the police are even entitled to get into the wallet or check the contents of the bank card entered the country. If on a card or in a wallet the amount is less than 1 thousand euros, then such a visa-free guest can point to the door in the direction of the return route. The reason, as reported, is that such a “guest” will not be able to purchase the required insurance and return ticket if he does not have permission to work in the Schengen countries.

Many were surprised by the citizens of Ukraine and Georgia when they learned that the EU had signed documents on the abolition of the visa regime with Moldova in April 2014. During this time, over 3 thousands of Moldovan citizens were fined in EU countries for violating immigration laws, two thousand sent back to Moldova. About one and a half thousand Moldovans were simply not allowed into the EU without visas. 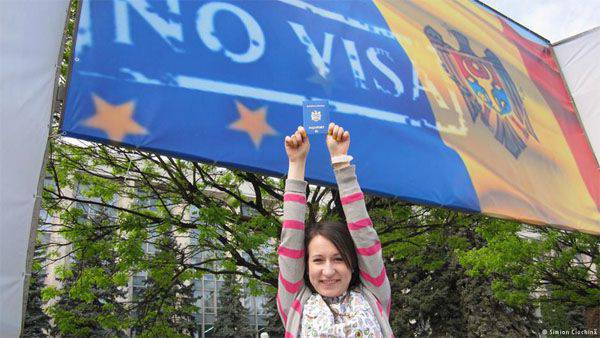 By the way, in order to gain a visa-free regime, Moldova was then obliged to open customs control points on the border with the MRT, which in fact officially recognizes the PMR as a separate territory from Moldova. In addition, the Moldovan authorities signed a document in which they pledged not to violate (read - to encourage) the rights of the LGBT community (apparently, for Europe this is one of the most important conditions for a visa-free regime ...), which caused a storm of indignation both in the camp of the opposition and in church representatives. The Chisinau authorities called the increase in the number of Moldovan tourists in Europe a positive aspect of the abolition of visas. According to the Tourism Association of Moldova, if in 2009, a little more than 800 Moldovans visited Greece, then 2015 thousands of people have already been to 15. About the return tourism, which could bring funds to the budget, the Moldovan association delicately silent ... Neither the Greeks, nor the Germans, nor even the Romanians did not go to Moldova ...

Reasonable question from the Twitter user under a nickname Lev sharansky:
Flight Kiev-Paris round-trip 8000 UAH., The hotel is not quite bomzhatskaya, a week - 12000 UAH. Meals, if pasta week - 7000 UAH. Total 27000 uah The average salary in Ukraine 2000 UAH. Attention, question: why the hell would you have visa-free regime

Ctrl Enter
Noticed oshЫbku Highlight text and press. Ctrl + Enter
We are
Results of the week. "The attraction of unheard of greed!"Results of the week. “Lord, why didn't England please him ?!”
Military Reviewin Yandex News
Military Reviewin Google News
132 comments
Information
Dear reader, to leave comments on the publication, you must to register.