... Friends called them "two Ivan." "Two Ivan - neighbors." “Two Ivana are bosom friends, they would even study at school and sit at the same desk, if it’s not a teacher’s ban.” "Two Ivana began working at the Novolipetsk Metallurgical Combine, now we rarely see them, they often stay on overtime shifts." “Two Ivana have decided not to evacuate to the Urals after the workshops of the plant, they are waiting for the agenda for the front, although they have a reservation.” "Two Ivana pass medical commission" ...

And suddenly Ivan had to part. The commission (she was appointed due to the fact that both volunteers, having come to the military registration and enlistment office with a request to send them to the front, were very strongly coughing) recognized only Ivan Petrovich Poletayev as eligible for service. And Ivan Nikitich Polukhin (even the names of one letter!) Did not take to the front. He was diagnosed with tuberculosis of the lungs in a closed form, which he had previously considered a common cold.

"Familiar with the medical case"

Ivan Poletaev, who at that time was twenty-four years old, went to war with the Nazis. He was sent to the thirteenth army, which occupied the front in the Efremov-Volovo area. This army numbered only about ten thousand people: there were few divisions, regiments, people were needed here. Ivan was assigned to the 121 Infantry Division, where he was supposed to serve (she was fighting in the Volovsky and Terbunsky districts), as the unforeseen happened. Part of it came under German shelling. A military doctor and two nurses died. But the wounded were not considered, and all needed help.
The division commander, having quickly built a soldier, asked:
- Which of you, comrades fighters, are familiar with the medical case?

I must say, even before the start of the war, Ivan studied at medical courses. He was not going to work all his life at the plant, he was really attracted by the profession of a doctor. But in Lipetsk there was no medical school, and Ivan couldn’t go to another city: he was caring for his sick mother. Therefore, I went to work at the plant, postponing the dream for the future.

And now he looked back at the fighters: maybe there is a doctor among them or someone familiar with the medical case? But the comrades were silent. Then Ivan sighed and took a step forward.

“Now you will give first aid to the wounded, send them to the hospital, then stay in another part for a while, pick up the experience of the doctors and come back to us,” said the commander. Apparently, he realized that Ivan was only familiar with the medical business, nothing more.

So Poletaev did. He rendered first aid competently and fairly confidently: great attention was paid to this in the courses. But Ivan really had to start his new duties very soon. In the fall of 1941, during the defense of the Volovskiy district, in the first battle there were many wounded. He carried more than twenty people from the battlefield. Everyone needed help. And Ivan rendered it as best he could, as his little experience allowed. To study medical art on the battlefield is a huge task in its complexity, because the learning process is without a right to make a mistake. But, apparently, this is the power of man.

Ivan was especially remembered by a fair-haired young man, to whom a bullet “pierced” his leg and stuck somewhere in the muscle, near the bone. Ivan knew: the bullet must be pulled out, the consequences can be bad - from further rupture of the muscle to gangrene. But taking a scalpel was very scary and unusual. Yes, neither a sleeping pill nor a strong painkiller at that time Poletaev had a bag. He poured half a circle of alcohol for the young man and advised:
- Close your eyes. Ten minutes of patience - and I'll get your bullet.

Trying to stop the trembling in his hands, Ivan began to wield a scalpel. The fighter strongly moaned, but tried with all his might not to kick his leg, and this patience gave an inexperienced surgeon strength.

- Tanks fit! moaned the fighter. - Ours are fighting, we have few forces and people, and I'm lying here ... Faster, please!

But Poletaev was in such a hurry as he could. Here it is, a bullet. Ivan pulled it out and began to sew up the wound.

- Everything! Soon you will dance and remember me! - He promised and suddenly saw a black blast wave, rising from the ground very close. I saw, but did not hear: the speed of sound is less than the speed of light, in order to hear what you see, you have to live for a few more moments. And Ivan has already lost consciousness ...

Ivan Polukhin stayed at home. The doctor prescribed him a treatment: good nutrition, rest whenever possible, warming up. But how could he, a young man, remain calm and follow the instructions of doctors when the country was in such great danger?

The blast furnace of the plant where Polukhin had previously worked has already been evacuated to the distant Urals. And Ivan began working as a postman - there was desperately lacking hands. During the day, he delivered letters and military newspapers, and in the evening and at night he worked at the bakery - help was also needed there. Of the three prescriptions, Polukhin faithfully carried out only the third — warming up. Because, dragging letters and winding kilometers, he warmed up. And when I got into the bakery, I was there, as if in a bath. But as for food and rest ...

At first, Ivan’s mail bag was very heavy: letters, letters, and very few newspapers. But with every war day there were less and less letters in the bag, but on the contrary, more and more newspapers. It was then that Ivan encountered the hardest work of the postman - with the expectation of letters from fathers, husbands, brothers. And, of course, with funerals.

Once on the street he was stopped by a very old woman, heavily supported by a stick, whom he did not know by name, but who also brought mail:
- Honey, from my son nothing? FROM Koziakov Sasha. So, probably, I will die, without waiting. After all, the ninety-third year has gone.

Ivan opened the bag, began to sort out the letters. And he saw on the very bottom of the burial with the name "Koziakov". He paused for a moment, and then, as he could, calmly said:

- No, Grandma, nothing yet.

Returning home, Ivan read the sad document. "Heroes died ..." Give grandma? But her image stood before his eyes: a thin, with a wand, heavy walking, living only by hope ... Ivan sat down at the table and began to write: “Hello, mother! I am in the hospital, so my comrade is writing for me. Everything is fine with me, the wound is not heavy, but so far I have to lie down. Letters will come rarely: wounded in the hand, I myself can not write. Do not worry..."

He did not know whether Sasha Koziakov used to refer to his mother to “you” or to “you”. Did not know his face, age, character, handwriting at last. He wrote very mean phrases that could not be guessed about fake news. But sometimes it seemed to him that Sasha Koziakov was he, Ivan. And that his hand is really injured, which will not heal soon ...

Sasha's mother, whose name Ivan never knew, died about a year later. At each meeting, she respectfully nodded to Ivan. And during this time he wrote her three letters: two from the “hospital” and one from the “front”. True, here he also came up with some reason explaining another's handwriting. She died with a calm heart, knowing that her son had already gained some military experience.

Soon, Ivan’s bag turned out to be a notice of the disappearance of Ivan Poletayev. Polukhin carried his mother to his friend with the words:
- Here ... But I believe: he is alive! .. Maybe in captivity ...

And Ivan Poletaev really was alive. It only turned out later, when Polukhin had already regained his health and had gone to the front. Therefore, he learned about the fate of a friend after the war.

And then, in 1942, Ivan Poletayev wrote a letter home, in which he said that after a concussion, his part did not find him right away - Ivan was covered with earth. He was accidentally discovered by soldiers of another part, then sent to a hospital, where he stayed for quite a long time. And then Ivan returned to the front, but in another part. So this sad misunderstanding happened.

... Two Ivan met after our victory. Only they were no longer called as before. Now they were called by name and patronymic.
Ivan Petrovich Poletaev did not become a doctor, he chose the path of the military and resigned with the rank of lieutenant colonel. And Ivan Nikitich Polukhin worked for a long time as a railroad worker. But at the beginning of the nineties, a lung disease had survived - Ivan Nikitich died. And Ivan Petrovich survived a friend for twelve years. 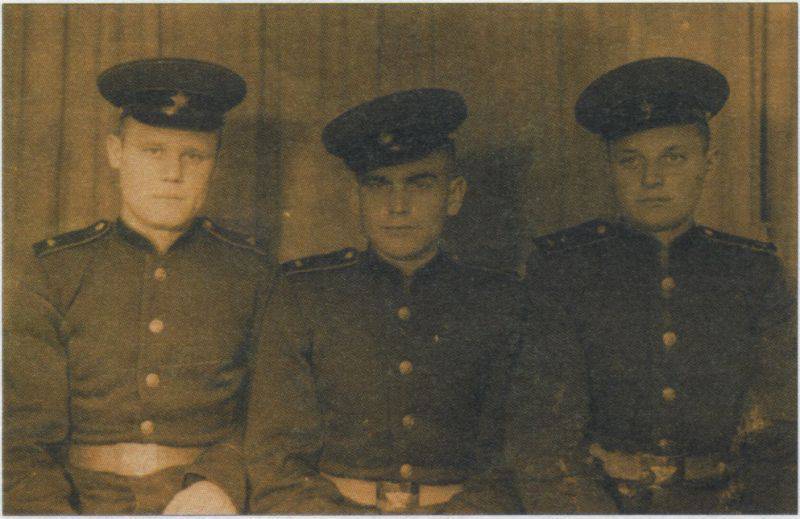 In the photo Ivan Polukhin - in the center