Misha as part of the Ukrainian political fauna

December 21 2015
33
"Be-be-be-be-be", "artist", "guest performer", "yap", "brought his country", "scoundrel", "such a bastard." Attention, a question: about whom it is, tell me, what is his name? Of course, we are talking about the current governor of the Odessa region, Michael (or, as he calls himself, Mikheile) Saakashvili. And all the epithets and other characteristics of the light of the fight against Ukrainian corruption, Ukraine and the world heard from the mouth of the representative of the Maidan government, one of the main perpetrators of everything that led to the bloody coup in Kiev, Arsen Avakov. The video in which Avakov rushes in a glass and pours mineral water on those sitting around, belching curses at the one who interferes “in one person” to rob Ukraine, demanding and sharing with him, has become super popular on the Web. This is truly "spiders in the bank" ...


It is worth paying special attention to the time of ignition of this skirmish, which demonstrates the level of “homogeneity” of the Ukrainian authorities. The case of watering and selective obscenity was after leaving the “Square” of its chief curator of antiquity, Biden. Joe himself, whose keen interest in Ukraine (as a result of her apparent problems with shale deposits and disappointment in connection with this Bayden scion), was also in some respects wiped out. Now Ukraine for Biden has turned into something resembling a private zoo, in which the owner at least occasionally needs to go and see, in order not to lose the ability to distinguish the inhabitants of the zoo from its ministers, especially since recently in some cases some have changed places with others. And the plates on the cells do not always give reliable information ... 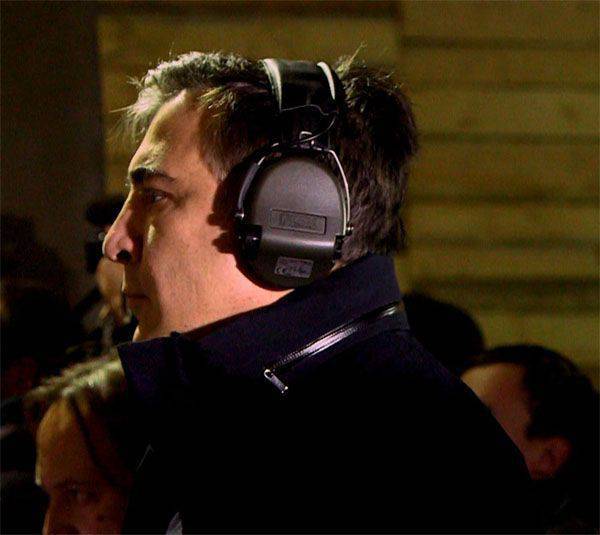 So, the skirmish between Avakov and Saakashvili that attracted attention occurred after the departure of old Joe across the ocean, along with selfies made with the fauna of Ukrainian “power”. After the departure, it became clear that Yatsenyuk, whose fate as the Ukrainian prime minister was hanging by that thread, seemed to have been resolved. The owner allowed Arseny to bring him slippers in his teeth for some time, i.e. perform the premiere work in Ukrainian. In Yatsenyuk camp, and formally Avakov from this camp (from the so-called “Popular Front”), they decided that some opponents, of lower rank, can now be made enemies of Ukraine and with the stick that creeps into the spokes of “Euro-reform”.
The main opponent of the “front-line soldiers” of Yatsenyuk, the lower-rank opponent, but at the same time obviously claiming a higher rank, is Saakashvili, who not for the first time calls both the prime minister and his team thieves. A couple of months ago, Saakashvili declared that government officials were plundering Ukraine, bringing the country to the economic situation in Zimbabwe. They say that Zimbabwe is offended by this comparison ...

And when the transatlantic curator made it clear that Yatsenyuk could remain in the prime minister’s chair, Avakov’s “front-line soldier” declared Saakashvili almost the main brake on Ukrainian reforms. The thing is that in the last few days several, as they say, signals from Western partners have come for Ukraine at once. At first, the IMF (apparently not without a hint from the United States) seemed to have allowed Kiev not to pay Russia on debts (Yatsenyuk vigorously announced a “moratorium”), but then the deputy director of the IMF, David Lipton, said that there was no lending under the International Monetary Fund can not be discussed, if Ukraine does not carry out structural economic reforms, which boil down to reducing costs. For obvious reasons, the Ukrainian Cabinet urgently needed to find a figure on which to hang all the dogs in terms of slowing down the reforms. They say that he is the state Georgian criminal, deprived of his citizenship (and Saakashvili was declared by Georgia on the wanted list at once under two articles of the Criminal Code - Art. 182 of the Criminal Code of Georgia - “Spoils of public funds” and Art. 333 ch. official powers ”), which now also hinders Ukraine’s aspiration to a“ bright European future ”.

To acknowledge the fact that every representative of the Ukrainian Panopticon from the authorities is responsible for the monstrous economic failures of a national scale, for obvious reasons, no one wants, but to point with a finger at who should be considered guilty of all troubles - for the sake of god

On Saturday, Sergey Brilev’s program on Russia 1 TV channel presented an interview with Secretary of State John Kerry. During the interview, the topic of Ukraine was also discussed. And it’s certainly not clear whether Kerry was cunning or not, but the fact is that the phrase about pressure exerted by Washington on Kiev in terms of the need for reforms by the Ukrainian authorities escaped from his mouth. After that, the Ukrainian authorities simply need, by definition, to find a switchman to whom you can write off the failures. But the question immediately arises: are the American curators ready to let Kiev merge Saakashvili exactly? The internationally-wanted ex-president of Georgia feels painfully at ease as the governor of Odesh region, and painfully frank statements about the Ukrainian authorities allow that the explicit approval of the United States to allow this official to be allowed ...

By the way, Avakov’s skirmish with Saakashvili led to the fact that, unexpectedly for Avakov himself, Mishiko’s rating in Ukraine rose to 40%. This is despite the fact that sociological monitoring services recently issued rating results of the Yatsenyuk Cabinet at the level of 2-3% and of the President at the level of 12-20%. It turns out that a single head of the RSA in Ukraine has a total rating higher than the ratings of both the president and the cabinet, and combined ... This information is not without interest for Poroshenko, for Yatsenyuk, and for the same Avakov, who actually contributed to the rating growth of the “artist” and the “guest performer”, who was hardly left without overseas patronage (Saakashvili, even as a “response to Putin,” showed a work visa - say, see what support I have).

As it turned out, Avakov raised Saakashvili’s rating not only for Ukraine, but also, for example, for ... Kazakhstan. So, the Kazakhstan edition Nur.kz It came out with the material, which refers to the decision of the Union of Muslims of Kazakhstan (QMS) and the Muslim Committee for Human Rights (IACHR) in Central Asia. It turns out that the QMS and the ICHR offers Mishiko to come to Kazakhstan and become the Akim (Mayor) of one of the cities of the republic. From the message:

Your resolute and fearless struggle with the corrupt officials of Ukraine made a huge impression on us. We will be very grateful if you translate this advanced experience on the territory of our country.

Human rights activists said that in the fight against corruption, Saakashvili in Kazakhstan will be given full support from both public and from the side, no less, government organizations. Mishiko, by the way, answered:
Thanks to the Kazakh brothers, but I cannot deliver such pleasure to domestic corrupt officials and I am not going to leave Ukraine anywhere.

But not all Kazakhstanis were inspired by the QMS initiative, saying that if Saakashvili liked this Union so much, then let them take it to the position of “Union Secretary General”.

From the comments of Kazakhstan media users:
What kind of union of Muslims ??? Who authorized them? Already for this you can bring to justice and disperse these pests.

QMS, do not disgrace us, change your name

Let us immediately invite the mayor of Kiev, since such a thing! Klitschko, we are waiting for you!

Is our QMS a humorous organization?

Humorous organization of this QMS - who knows ... but the fact that Ukraine, through the work of Saakashvili or Avakov format, has long been turned into a humorous organization, and with a frankly black humor, is a fact. In an effort to plunder the once richest republic to the end, they are ready to sink to the market state, not caring much about how this is perceived by the long-suffering Ukrainian citizens.

Ctrl Enter
Noticed oshЫbku Highlight text and press. Ctrl + Enter
We are
How Maidan ravaged Ukraine. Two years ago, a coup d'état took place in KievResults of the week. "I will tell everyone how far the PZh figurine has brought the planet to it"
Military Reviewin Yandex News
Military Reviewin Google News
33 comments
Information
Dear reader, to leave comments on the publication, you must sign in.