In the lunar scam of the United States put a bullet! 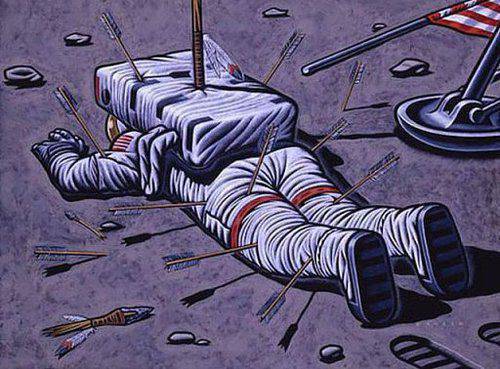 Published a death interview with renowned filmmaker Stanley Kubrick, in which he told in detail and thoroughly that all lunar landings were fabricated by NASA and how he shot all the frames of American lunar expeditions on Earth ... Thus, in many years of unprecedented lunar fraud by the United States itself worldwide recognized by the Hollywood master of directing put bold and final point.

The interview is published later 15 years after death. Director T. Patrick Murray interviewed Stanley Kubrick three days before his death in March 1999. He was previously forced to sign an 88-page non-disclosure agreement (NDA) for the contents of the interview during 15 years from the date of Kubrick's death.

Here is a transcript of an interview with Stanley Kubrick (in English).

Kubrick’s deathbed interview in recent days has become a real sensation all over the world.

In 1971, Kubrick left the United States for Great Britain and never again appeared in America. All his subsequent films were shot only in England. For many years, the director led a reclusive life, fearing murder. According to the English newspaper San, the director "was afraid of being killed by US intelligence agencies following the example of other participants in the tele-support of the lunar scam of the United States."

The director died suddenly, allegedly from a heart attack at the end of the editing period of the film With Eyes Wide Shut, in which Tom Cruise and Nicole Kidman played the main roles. It was Kidman in July 2002, in an interview with the American newspaper The National Enquirer that Kubrick was killed. The director called her 2 hours before the official time of the "sudden death" and asked not to come to Hertfordshire, where, as he put it, "all of us will be poisoned so quickly that we don’t even have time to sneeze." According to British journalists, employees of the US National Security Agency for the first time tried to kill Kubrick back in 1979 year.

The violent nature of the death of Kubrick 7 in March 1999, in an English estate near Harpenden (Hertfordshire) later became the cause of his widow's revelations. In the summer of 2003, in an interview with French television, and later, 16 in November, 2003, in the program “The Dark Side of the Moon” (CBC Newsworld TV channel), the director’s widow, German actress Christiane Suslanne Harlan made a public confession, the essence of which was:

At a time when the USSR was already mastering space with might and main, US President Richard Nixon, inspired, according to the widow, by her husband’s science fiction film epic, which history as one of the best Hollywood masterpieces, 2001: Space Odyssey (1968), called the director along with other Hollywood professionals to “save the national honor and dignity of the United States.” What the masters of the “dream factory” headed by Kubrick did. The decision on fraud was taken personally by the President of the United States.

Similar statements from the participants of the "project" were made earlier.

In particular, missile engineer Bill Keising (Will Kaysing), who worked at Rocketdyne, the company that built the rocket engines for the Apollo program, is the author of the book We have never flown to the moon. The 30 Billion Dollar American Deception "(" We Never Went to the Moon: America's Thirty Billion Dollar "), released in 1974 and co-authored with Randy Reid, also stated that under the guise of a live coverage of NASA's lunar module landing spread a fake shot on Earth. For the filming was used military ground in the desert of Nevada. In pictures taken at various times by Soviet reconnaissance satellites, one can clearly see the huge hangars, as well as a large portion of the "lunar surface" dotted with craters. It was there that all the “lunar expeditions” filmed by Hollywood experts took place.

Daredevils were even among the astronauts themselves. So, the American astronaut Brian O'Leary (Brian O'Leary), responding to a direct question, said that "can not give 100-percent guarantee that Neil Armstrong and Edwin Aldrin really visited the moon."

However, it is only now, after the direct confessions of Stanley Kubrick himself - the world-renowned Hollywood master of directing - that the final and bold point is set in the American lunar scam.