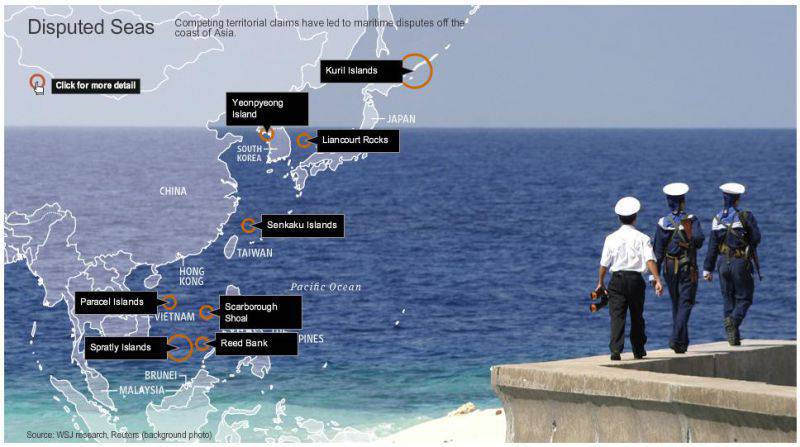 15 and 16 December there were two extremely important events that, at first glance, are not related to each other, but which will affect the entire world order. Event one - after a long discussion, the US approved a deal to sell weapons to Taiwan. Island will be sold weapons worth $ 1,83 billion, including two frigates class Oliver Hazard Perry. Event Two: The US Fed raised its base interest rate in the 0,25-0,5% range. The dollar strengthened, US goods are becoming more expensive. Now, for an airline located, say, in the Emirates, it is cheaper to buy an Airbus than a Boeing, and this is a problem for the American economy. What to do? This is where the frankly colonial mechanisms of the Transatlantic Trade and Investment and Trans-Pacific Partnerships come to mind. In other words, other countries will simply be forced to buy American products at an exorbitant price.

But China, which had previously greatly devalued its national currency, at the same time not being a political vassal of the United States, remains outside this scheme, and will receive an unprecedented economic push, which it just did not have. Moreover, the People's Bank of China literally two days before the historic decision of the Fed lowered the RMB exchange rate to the dollar by 137 basis points - to 6,4495 yuan for the dollar. Thus, these two currencies twice in a week went in opposite directions.

The only way to stop China striving for economic leadership (and simply seeking to trivial survival) China is war, and it is towards her that the US is moving fast-paced. On January 16, presidential and parliamentary elections will be held in Taiwan, in which the Democratic Progressive Party (supporter of independence) will definitely win. Even if the DPP does not take explicit steps toward secession, the relationship between Beijing and Taipei will no longer be the same as it is now.

The Spratly Islands continue to fester, where, in addition to Chinese and Taiwanese bases, there are still Vietnamese and to a lesser extent Malaysians, Filipinos and Bruneians. True, in the coming conflict the archipelago has more chances to become a peripheral front than the main one, but this front will be very hot. The 1988 experience of the year, when whole sea battles with dozens of casualties took place near the islands, should not be forgotten in any case.

In December, by the way, the Americans again circled over the archipelago with B-52 bombers, to which China responded by accelerating the construction of infrastructure.

Japan is also preparing for a possible aggravation in its southern seas. In 2016, Tokyo will conduct a public test of the new XASM-3 supersonic anti-ship missile, which will hit the recently decommissioned Shirane helicopter carrying 7500 tonnes. This step is more political, because the Philippines showed great interest in purchasing the ship, but in an aggravated situation, the demonstration of power becomes more important than commercial gain. In addition, Tokyo will test its own prototype of the fifth generation fighter, as well as adopt the F-35 fighter jets and convertible V-22 fighter jets, and the resurgent marines will receive the AAVP-52A7s amphibious aircraft.

However, if to arrange the conflict through the participation of Taiwan and will not succeed, then there are alternative options. For example, in the south. So in November parliamentary elections in Myanmar, the party of pro-American oppositionist Aung San Suu Kyi won. To understand what the views of this woman, even a cursory acquaintance with her biography is enough. It should be recalled here that just a few months ago, there was a border armed conflict between the PRC and Myanmar, which was practically ignored by all world media. And the provocative side was made by Myanmar, the soldiers and aircraft of which repeatedly attacked the territory of China.

On whose side to become in these conditions Russia? First of all, neither the US coalition, nor China are friends with us, and it’s not yet known who the enemy is to a greater degree. Secondly, our country is weak in the Far East, and cannot be a full-fledged ally of any of the parties. The population of the entire Far Eastern region is 6,3 million inhabitants. For example: the population of the northernmost prefecture of Japan, Hokkaido, is 5,5 million, and the northernmost province of the PRC - Heilongjiang - 38 million. We will modestly keep silent about economic and military development. When the Navy of a poor country like Myanmar receives more than two dozen surface warships for the 1991-2015 period, and the Russian Pacific Fleet for the same period is four times less (and only two in the post-Soviet Russia), then what kind of revival you can speak?

And finally, thirdly. Both Japan and China are preparing for the fact that Russia itself, under certain circumstances, can become a field for division. For example, the Chinese Xinhua news agency 17 December published an article entitled “Will Russia be able to withstand the test of strength against the backdrop of a complex crisis?”, Which states that the Russian Federation has come to a strategic dead end and a systemic crisis. The hint is more than transparent. Actually, this is not even a hint. So the big war in Asia, most likely, will affect Russia not at all on a tangent.

For a long time, more precisely, from the very end of the Second World War, in East and Southeast Asia, large-scale redistribution of borders did not occur. No, individual territories, of course, changed ownership - both by peaceful transfer of sovereignty and by force of arms. Often, very large areas, thousands or even tens of thousands of square kilometers, became objects of such revisions. But never after 1951, there was a massive one-time redrawing of borders with a large number of actors. The collapse of the bipolar system and global economic shifts have led to an imbalance, and the imbalance always ends in conflict.

Now the wicks are set on fire: financial, political and military. The huge Asian armies, which until recently had restrained the conflict potential of the parties, are now increasingly being viewed as a valid foreign policy tool. And woe will be to whose instrument is not good enough.

Ctrl Enter
Noticed oshЫbku Highlight text and press. Ctrl + Enter
We are
Projection of forceStrangulation: the context, conduct and consequences of the American naval blockade of China
82 comments
Information
Dear reader, to leave comments on the publication, you must to register.