December 23 2015
2
In preparation for the upcoming landing in Normandy, the military and engineers of the United States began active work on the development of self-propelled artillery. Since the end of 1943, they have been upgrading the M12 ACS, as well as developing a similar M40 machine with a different instrument and on a different chassis. In the future, it was decided to launch several new projects, the purpose of which was to create self-propelled artillery systems with increased firepower. One of these projects led to the emergence of an M43 HMC type ACS.


By the outbreak of hostilities in France, the US ground forces had a limited fleet of self-propelled artillery systems, the caliber of which did not exceed 155 mm. To solve combat missions that require greater firepower, we needed appropriate equipment. Calculations showed that the use of existing developments will improve the characteristics of technology through the use of larger caliber guns. The result of this was the formation of requirements for a promising ACS with an 8-inch (203 mm) gun. The development order was placed in November 1944 of the year. The project received the working designation T89.

According to the terms of reference, the promising self-propelled gun was to be based on the T83 / M40 self-propelled chassis, which was a modified medium chassis tank M4A3 Sherman. A 115 mm M203 howitzer should have been installed on this chassis. Sherman tanks and M40 self-propelled guns were already built in series, and the necessary howitzers were in service since 1940. All this made it possible to relatively quickly complete the design, and then begin production of new combat vehicles. This approach was fully justified: the development of the T83 project was completed in the first months of 1945. 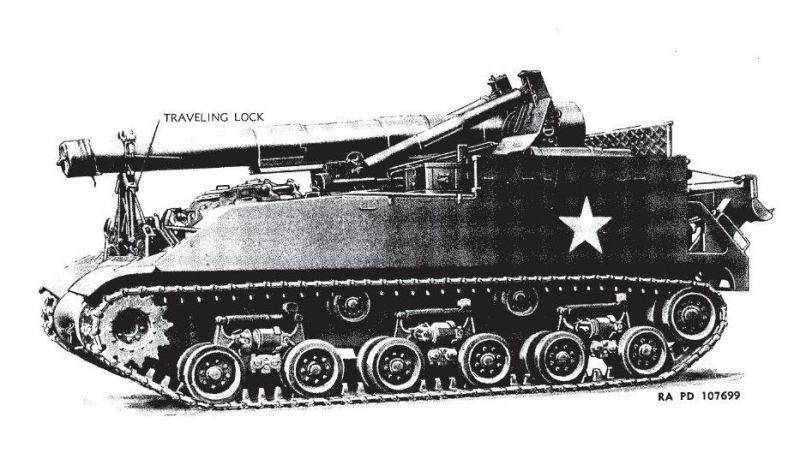 General view of the M43 HMC. Photo of Wikimedia Commons

The main element of the armored T89 became the body of the M40 ACS with a set of all necessary equipment. It was a redesigned hull of an existing M4 tank, designed with the application in mind. Calculations have shown that replacing a tool with a more powerful one will not require significant reworking of the hull or its units. Thus, the base armored vehicle has undergone only minor changes, due to the need to strengthen the rear part for the installation of 203-mm guns.

The housing retained the existing design and was still assembled from several parts of different shapes, sizes and thicknesses. The frontal projection of the hull was protected by the bottom part, which was the transmission compartment cover, up to 4 inches thick (about 10 cm). The upper frontal part was located at a large angle to the vertical and had a thickness of 12,7 mm. The hull had vertical sides with an increased aft part and a horizontal roof. In the stern part, a fighting compartment was designed, made in the form of a cabin open from above and behind.

The layout of the hull was similar to the previous self-propelled guns of the time. In front of the case were located transmission units, due to which the lower frontal part had a characteristic appearance. Behind them there was a department of management with the places of the driver and commander. In the central part of the body provided for the engine compartment. The engine was connected to the transmission with a propeller shaft passing through the control compartment. Feed was given under the fighting compartment with a weapon and ammunition.

Chassis retained radial aviation Continental R975 C4 engine with up to 400 hp The transmission included a five-speed manual gearbox and other units that linked the engine to the front drive wheels. With the exception of the engine and its location, the T89 was unified with the Sherman tank in terms of power plant and related components. At the same time, complete unification with the M40 self-propelled guns was achieved. 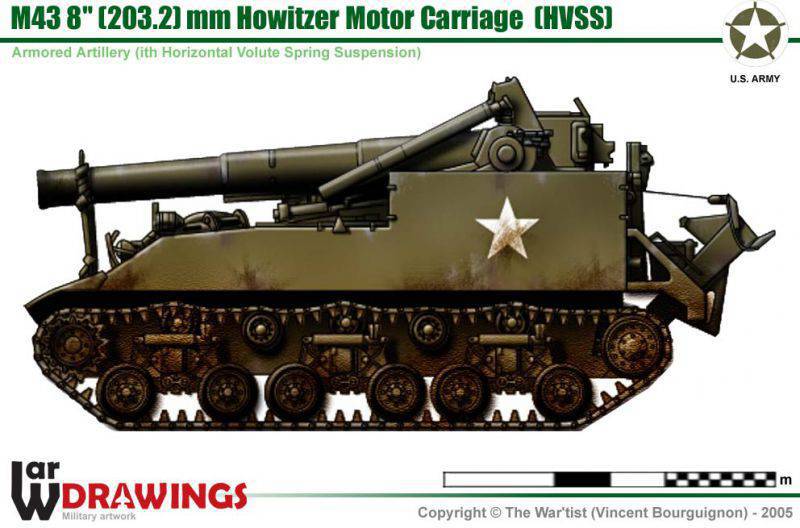 Side view of the car. Figure Wardrawings.be

In comparison with the basic project has not changed and the chassis. On each side there were three trolleys with two support rollers and one supporting roller on each. The self-propelled gun was equipped with a spring suspension of the HVSS type with a horizontal arrangement of elastic elements. By the design of the chassis perspective T89 did not differ from the M40 and M4A3.

To keep the ACS in place during the shooting and the transfer of a powerful recoil impulse to the ground in the stern of the machine, there was a reinforced opener. It was proposed to lower it to the working position before shooting and lift it to the transport using a hand winch. A sheet was provided on the brackets for mounting the opener, which increased the size of the platform for the work of the calculation.

On the stern of the hull placed installation type M17 with fasteners for guns and guidance mechanisms in two planes. Mechanisms with manual drives allowed the gun to be rotated to an angle of up to 18 ° from the axis of the machine in a horizontal plane and to raise the barrel vertically from -5 ° to + 45 °. In addition to the gun installation in the fighting compartment, racks were provided for carrying 16 shells of separate loading, as well as places for landing gunners during movement.

The M115 howitzer used had a caliber 203 mm and was equipped with a barrel length 25,3 caliber. There were hydropneumatic anti-recoil devices that reduced the recoil force transmitted to the body of self-propelled guns. The gun was equipped with a piston gate. Due to the shorter barrel length, the M115 howitzer, having a larger caliber, differed from the M1 / 2 guns used on the M40, with a slightly lower weight. 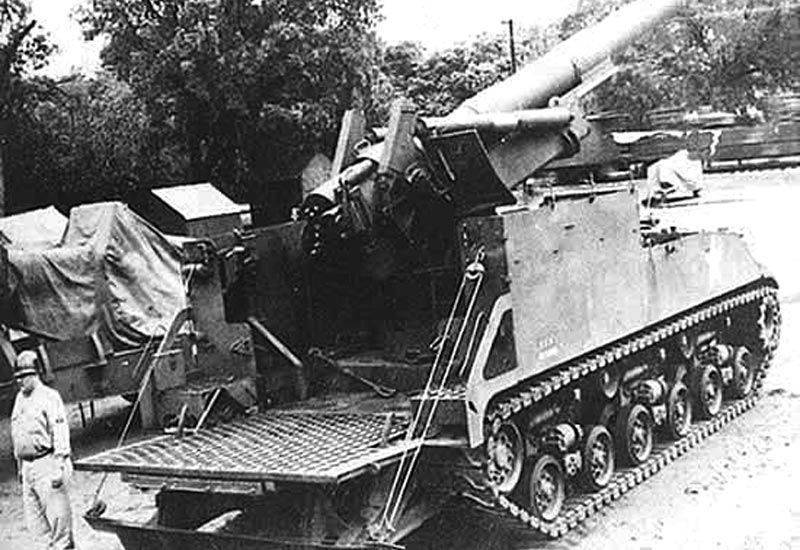 The M115 howitzer ammunition consisted of two types of high-explosive fragmentation projectiles, M106 and Mk 1A1 weighing 90,7 kg. Also several variants of propellant charge with different weights were provided. With an initial speed of up to 595 m / s, shells could fly a distance of 16,9 km.

The T89 ammunition consisted of a total of 16 projectiles with missile charges. To expand the capabilities of this technique was offered with the help of transport vehicles. In addition, a modified version of the T30 ammunition conveyor, based on the T83 / M40, was to work along with the new ACS. At the end of 1944, an upgraded version of this machine was proposed, in the aft compartment of which there were universal mounts for shells from 105 to 250 mm. Thus, such machines could work with self-propelled guns of various types and enable them to fire for a long time.

Despite the use of new weapons, the composition of the crew remained the same. The driver’s office and the commander were to be located in the department. Calculation tools consisted of six people who were in the fighting compartment. Their duties included various operations for the maintenance of weapons and firing.

Self-propelled gun T89, being a modernized version of the M40, had similar dimensions. The length of the machine (without tools) was 7,12 m, width 3,15 m and height (at the upper point of the gun installation) - 3,3 m. The combat weight of the machine was 36 t. No significant differences in weight parameters, as well as in the design of the chassis and power plant allowed to keep the mobility of the new ACS based on the previous M40. The maximum speed on the highway reached 40 km / h, the power reserve - 160 km. The possibility of overcoming the ditch 2,3 m wide, climbing the slope 60% or 61-cm wall, as well as wading through a reservoir to a depth of 1 m was preserved. 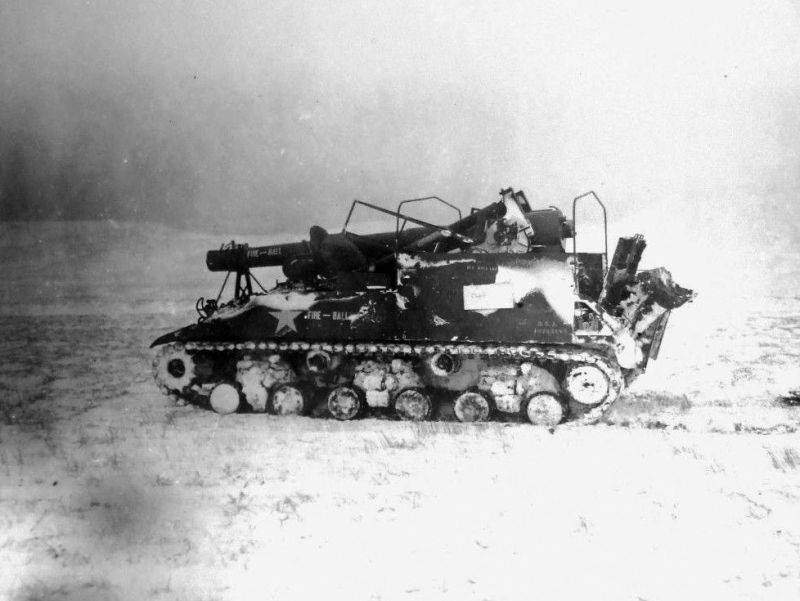 Development of the project T89 took only a few weeks. In the first months of 1945, the company Pressed Steel Car, engaged in the construction of new self-propelled guns, received an order to assemble a prototype of a new combat vehicle. Soon after the construction was completed, an experienced ACS T89 was put to the test, the Aberdeen Proving Ground became a platform. The tests revealed no serious problems. Both the gun and the chassis had already passed the full range of necessary checks and modifications, thanks to which they were able to get rid of all the significant shortcomings.

In March 1945, the prototype T89 completed the tests, which allowed the military and industry to begin planning for the production of advanced technology. In August, the self-propelled gun T89 was adopted under the designation M43 Howitzer Motor Carrier. According to some reports, the decision on the mass production of new equipment was made immediately after the completion of the tests, after which the assembly of the small series M43 began at the Pressed Steel Car factory.

Production of serial M43 HMC continued until the end of the Second World War (according to other data, until the end of 1945 of the year). During this time, 48 armored vehicles with M115 howitzers were built. According to some sources, at least part (or all) of the M43 ACSs were not made from scratch, but were rebuilt from the existing M40 GMC serials. After the end of the war (or at the end of 45), the construction of self-propelled guns was canceled.

According to reports, the M43 ACS appeared too late, which is why they did not have time to take part in World War II. This technique began to enter the artillery units only at the beginning of the summer of 1945, when the fighting in Europe had already ended. Despite this, the troops began to fully exploit the latest technology. After mastering the new machines have been repeatedly used in various exercises and maneuvers. In addition, in the future machines M43 HMC managed to take part in the battles. 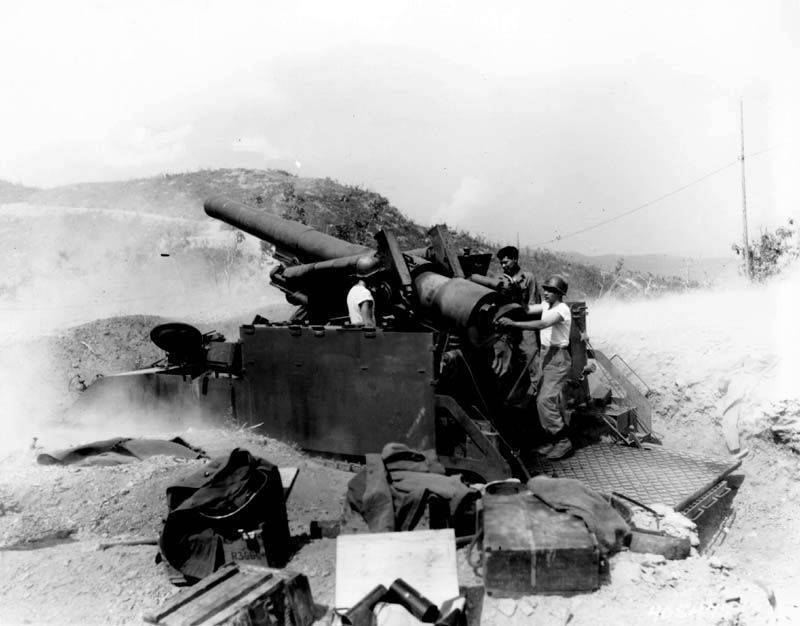 After the start of the war in Korea, the United States armed forces sent various military equipment to the theater of military operations, including self-propelled artillery mounts based on the Sherman tank. The M40 GMC and M43 HMC armored vehicles were actively used to fire remote targets from closed positions. In this case, techniques were used that were worked out during the Second World War by the calculations of “old” self-propelled guns.

The operation of the M43 ACS continued until the second half of the fifties. At this time, American troops began to write off obsolete technology from the Second World War, which remained in service. The ground forces refused the old M4 Sherman tanks and various armored vehicles based on them. As a result, all M40 and M43 were written off. At least three copies of the M43 HMC self-propelled guns are kept in several US museums.