OMDURMAN The Last Battle of Horseman

Oiled clothing
And aches and itching.
Roads and marinas
Descendants Ponastroy,
Put your life on it -
And lie in a stranger's land!
(Whites. R. Kipling)

When was the last time horsemen, dressed in chain mail and helmets glittering in the sun, participated in the battle? Who and who fought in it, when was it for the battle, where did it happen?

It is logical to assume that such a battle should have happened a long time ago, but in fact, only a little longer than a hundred years separated us from this battle. Unbelievable, but it is a fact! In 1898 g in the battle of Omdurman in Sudan, the Mahdist cavalry with shields in their hands, dressed in glittering helmets and chain mail suicidely attacked the British machine guns of the Maxim system ... Horses are very sorry!

At the beginning of the XIX century to the south of Egypt on the lands in the upper Nile formed the state of Sudan, which consisted of principalities and tribal territories that did not reach the feudal system. Sennar and Darfur - the richest princedoms of Sudan - led a rather active trade with their northern neighbor Egypt. They brought ostrich feathers, ivory, black slaves from the Sudanese villages to the Red and Mediterranean Seas for debt, or raided these villages. In Sennar’s export share, the slaves were 20% and 67% in Darfur’s exports, which were farther from the coast of the Blue and White Nile and therefore its “hunting grounds” were richer. 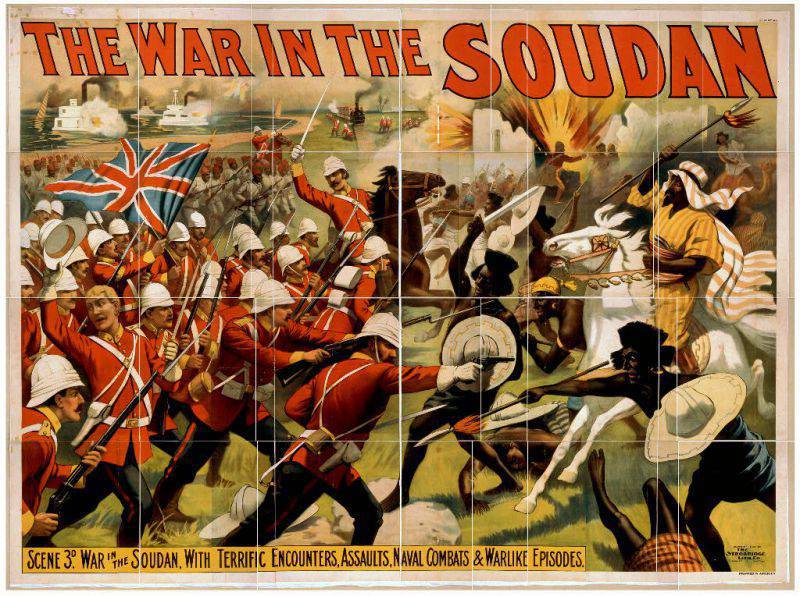 The war in Sudan. British poster of the late XIX century.

In 1820-1822 Sudanese lands were conquered by the Egyptians. Therefore, Sudan became one of the Turkish colonies, because at that time Egypt was formally part of the Ottoman Empire, although it had considerable autonomy. At first, Egyptian (it’s Turkish) government did not cause any particular indignation. Many fortifications did not see the conquerors, but uniteors of the entire Islamic world against the European threat and voluntarily surrendered. After all, quite recently, General Bonaparte undertook a military campaign in Egypt. But it soon became clear that the Sudan was being rapaciously robbed by the Turkish administration, without leaving any funds for development. So the irrigation system that existed before was destroyed. German traveler A.E. Brem reported that "before the Turks on the Nile island of Argo, there were up to 1000 water draining wheels, and now their number has decreased to a quarter." At the same time, after the conquest of Sudan, the slave trade increased many times over. Previously, about ten thousand slaves were delivered to Egypt from Sudan per year, while in 1825, 40 thousand were exported, and in 1839 - about 200 thousand. Such trade did not bring benefits to the country. Villages were deserted, and money for live goods in Sudan did not remain all the same. In addition, by taxes and confiscations, gold and silver stocks were very quickly withdrawn from the country's population.

Initially, the conquerors in Sudan almost did not meet with serious resistance, but later uprisings began. Not always deprived people acted as a pioneer of unrest. Local oligarchs also did not avoid the slave trade. The main problem of Sudanese politics was the division of profits from the slave trade. It was difficult to resolve the issue that the slave trade is the monopoly of the state only, or private entrepreneurs can be allowed into this business. There were paradoxes. A number of historians called “liberals” Sudanese politicians who advocated the demonopolization of the slave trade, and “conservatives” those who demanded to ban this business. And this was its own logic, because the “liberals” tried to introduce Sudan into the economy of the world of capital, seeking freedom of entrepreneurship, and the “conservatives” were dragging the country back into antiquity, towards tribalism. 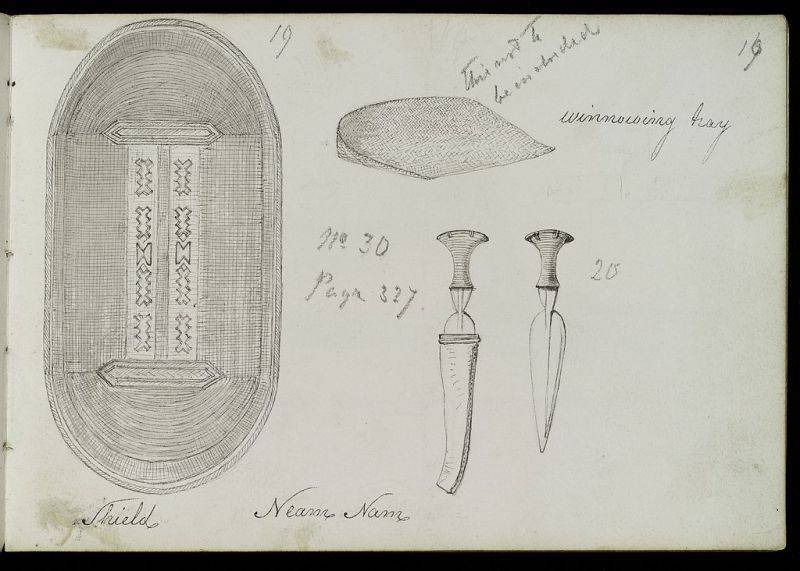 The image of representatives of the authorities as defenders of Muslims against the domination of Europeans did not take shape either. First, the highest administrative posts were occupied not only by the “Turks”, but also by the Circassians, Albanians, Levantis, Greeks and Slavs - Islamized (and not quite). Many of them at the end of the XIX century. Europeanized to such an extent that the cultural divide with the Muslims of Africa was widening. Secondly, in real numbers, under Turks, real Europeans poured into the upper reaches of the Nile: Russians, Germans, British, French, Poles, Italians.

Together with the continued robbery of Sudan by the Turkish colonial regime, there have been weak attempts to modernize it as a state. We even managed to establish the Nile Shipping Company and build a railway branch in the north of the country more than 50 km. Engineers, officers, doctors were invited to the government service. Although there were a lot of easy money seekers, outspoken adventurers. Of course, there were also people who tried to pursue a policy favorable to Sudan.

The title of Pasha was the first of the British, and with it the post of Governor-General of the Equatorial Province of the Ottoman Empire received in US 1869. Baker However, this province was inhabited mostly by non-Muslims, but by pagans and it was still to be conquered. But after a few years, a whole group of Christian governors appeared in the semi-Arab and Arab regions. In 1877, Mr. C.J. Gordon (an Englishman and he was a member of the Crimean War) occupied the post of governor-general in Egyptian Sudan. He sought the appointment of Europeans to military and senior administrative positions, the British and Scots mainly, at worst, the Austrians, Italians, and the Austrian Slavs. But certainly not the Americans or the French. He dismissed some of the representatives of these nations that served earlier. The United States and France had their own views on Sudan and could have Great Britain resisted. Such appointments provoked talk of the “tyranny of the infidels,” through which the Muslims of Africa fell under the direction of the Turks. Soon after the appointment of Gordon as governor-general, an uprising began, as if a national liberation, but there was one pretty piquant detail, which we will discuss later.

In 70's XIX century. The Ottoman state was weakened quite strongly. Ethiopia Turks in 1875-1876 failed to capture. Russian-Turkish war 1877-1878 demanded from the decrepit Islamic empire of tension of all forces. This forced the search for allies who could dictate their terms. Turkey concluded with the United Kingdom in 1877 a convention to combat slave trade in Sudan. Its implementation was entrusted to Gordon. It was the measures taken by him that caused the south-west of Sudan to "rise in flames". We have said earlier that trade in slaves was at the heart of the economy of these territories. Naturally, under various pretexts, the poorest strata of the population were drawn into insurrection, but Suleiman vad al-Zubeir, the largest oligarch slave trader, stood at the head. Support it amounted to armed detachments, which were formed from slaves, and his own. No wonder. The slave of a powerful lord, intended for personal use and not for resale, received a certain social status, by the way, in Sudan, of all possible, not the worst. True, no one had any idea what will happen to the slave after his release.

At first, Suleiman vad az-Zubeiru managed to win the battles, but later, by Gordon’s order, the strictest economic blockade of the south-western regions was established, and by July 1878, the uprising had simply suffocated. At the mercy of the winner, nine leaders and Az-Zubeir surrendered, but all of them were shot. At the same time, Gordon was recalled from the post of governor-general and sent to Ethiopia as a special ambassador. The place of the Governor-General was taken by Mohammed Rauf, a Sudanese Arab.

Further events showed that the excitement of 70-x - it's just flowers. The slavers who were afraid of losing their jobs were not the only discontented in Sudan. And in 80's, the fermentation process continued. But now he continued on religious grounds as well. In 1881, in August, the Muslim messiah Mahdi delivered the first sermon in public. 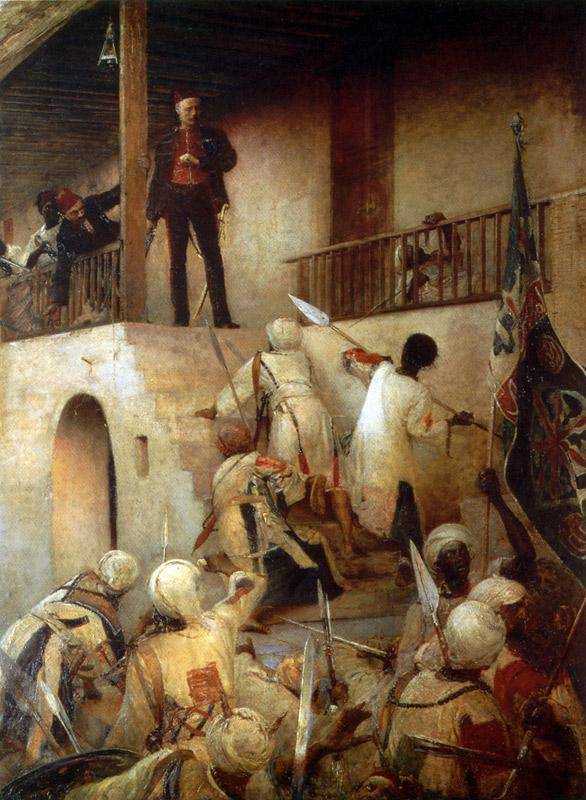 The death of General Gordon during the fall of Khartoum. Painting by JW Roy.

The former name of Mahdi was Mohammed Ahmed. He left the family allegedly belonging to the closest relatives of the Prophet Mohammed. However, the father and brothers Mahdi, despite their origins, earned a living from the most famous craft - the construction of boats.

Only Mohammed Ahmed, one of the whole family, wanted to become a scribe and get an appropriate education for this. In this field, his career was quite successful, and by 1881, he had quite a few students. Mohammed Ahmed first called himself Mahdi when he was 37 years old. After a series of travels, he settled on the island of Aba on the White Nile and from there sent letters to his followers calling for a pilgrimage here. Many people gathered on the island of Aba, and Mahdi called them to a holy war against the infidels - jihad.

It should be noted that the ideology of the Mahdists (this is how the Europeans called the followers of the Messiah) was somewhat different from the early Islam of the Prophet Muhammad, which was due to the current political situation. According to the classical doctrine, jihad is conducted by Muslims, primarily against pagans. And Jews and Christians belong to the “people of the scriptures,” and therefore we will allow a compromise with them. In Sudan, the end of the XIX century, everything turned out a little crooked. Not only Jews and Christians, but even Turks, were among the “infidels” against whom the irreconcilable jihad was directed, since Mahdi called them “Muslims by name only”. At the same time, the pagan tribes of South Sudan were natural allies of the Mahdists, and very often the Mahdists themselves were quite tolerant of their idolatry. What kind of jihad is this? Everything is based on the principle: “The enemy of my enemy is my friend!” 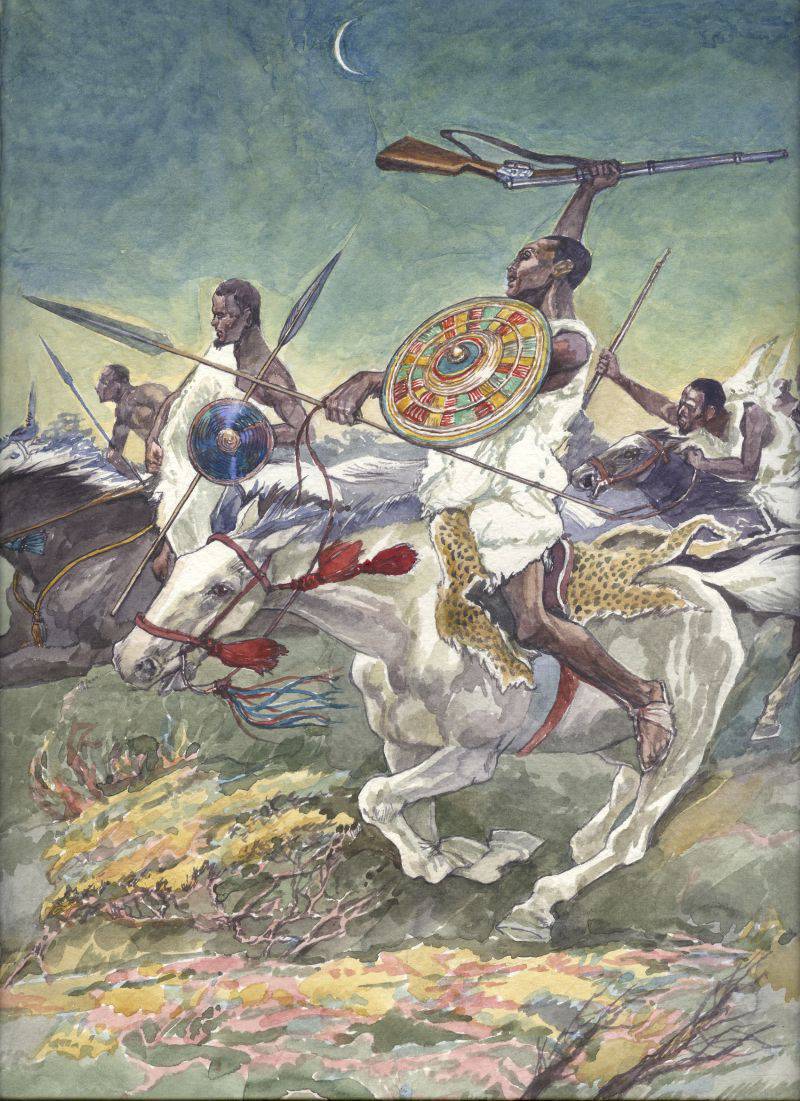 From the capital of Sudan, Khartoum, which is located at the confluence of the Blue and White Nile, Governor-General Mohammed Raouf sent a steamer with a military detachment to Abu to suppress the riot. But the operation was organized extremely ineptly and in fact unarmed Mahdists (they only had sticks or spears) succeeded in destroying the sent punishers. Then a series of rebel victories began, after each battle the rebels tried to seize firearms. Finally, this brought the country to the state, later called the “surrounding of the cities by the rebellious village”.
To be continued ...