"Private Talk" about the care of Assad

December 19 2015
144
Unnamed sources of the Reuters agency in diplomatic circles assert that the Russians “made it clear”: they are ready to agree to Bashar al-Assad’s resignation from the post of president of Syria. At least, this “readiness” of the Kremlin is confirmed in “private conversations”. Some Western officials believe that there is a possibility of a similar compromise between the West and Moscow. 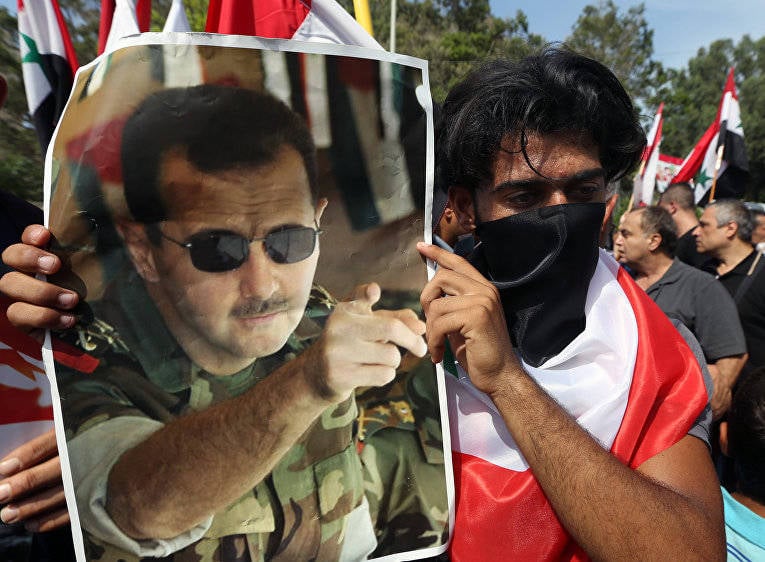 As reported by 17 December agency ReutersRussia "made it clear" to the West that it has "no objections" against the departure of Syrian President Bashar al-Assad in the framework of the peace process. This correspondent was told anonymously by some diplomats.

The article notes that Russia, like Iran, was a true ally of Assad, and on his behalf carried out military intervention. Russian forces are participating in the war against anti-government forces, journalists are confident.

Russia and Iran have long insisted that the fate of Assad should be decided on a nationwide vote. The Western powers, as well as Turkey, Saudi Arabia and some other local countries are unhappy with this state of affairs: they "reluctantly agreed" so that Assad would be allowed to "stay in place during the transition period." However, “the door of precisely such a compromise was opened by Russia,” Western diplomats say.

And in the final of this compromise, Asad still leaves, added one high-ranking Western diplomat, who spoke to journalists on condition of anonymity. According to him, “in private conversation,” the Russians accepted the point of view that Assad would resign at the end of the transition. True, Moscow is not yet ready to make a corresponding statement publicly, he explained.

Several other Western officials confirmed the message of this diplomat.

Further, Reuters recalls that the United States, Russia, Iran, Saudi Arabia and the major European and Arab states had previously agreed on a road map: six months are given for negotiations between the Assad government and the opposition. The formation of a national unity government should begin as early as January 2016. Elections will be held within 18 months.

According to officials, the United States and Europe insist: Assad can not participate in elections.

Despite the rapprochement of the positions of Russia and the West, there is still a “deep gap” in the negotiations on ending the civil war in Syria, diplomats and officials close to the negotiations said to Reuters. However, this gap is gradually narrowing, one senior Western diplomat noted.

According to the assurances of diplomats, Russia in its judgments about the resignation of Assad has already gone further than Iran. And we are talking about the coordination of the transition process. It’s harder with Iran than with Russia: Tehran has supported Assad for many years with military force, and he would have “lost face” if he had allowed Assad to leave.

One of the interlocutors of "Reuters" said that the key to the negotiations is exactly how Russia and Iran will agree to Asad’s departure. In his opinion, both Moscow and Tehran should do this "jointly."

According to another Western diplomat, Russia has already compiled a list of candidates representing a “replacement” for Assad (no details). And it is not clear whether Iran has its own list.

After the negotiations are completed, the UN Security Council expects to adopt a resolution approving a plan for a political transition in Syria. Diplomats say that the UK, China, France, Russia and the United States "have to agree on the text."

A little earlier information from Reuters on White House website There was a recording of the briefing by White House spokesman Josh Ernest.

The text notes that Washington would welcome the actions of the Russian Federation against the “Islamic State” in Syria, but for this, Moscow will have to change its military strategy in the region.

According to Mr. Ernest, the Kremlin supports the regime of Bashar al-Assad in Syria, and the White House is in favor of a political transition. A spokesman said that the Russians are conducting military operations not where the militants of the “IG” were stationed, but where the forces of opposition groups opposing “against the Assad regime” were concentrated.

Washington believes that such actions by Russia are contrary to the policies and priorities of the United States and coalition states. According to Ernest, now there is no reason to talk about the rapprochement of Moscow and Washington regarding Syria.

So, let me add, the United States would “welcome” the struggle of Russia against the terrorists “IS”, but at the same time the United States would also welcome the withdrawal of Assad. The position, it should be noted, is very convenient: the Russians refuse to support the “Syrian regime”, and at the same time shoulder the war with the army of militants, whose appearance in the region is directly connected with the US policy of recent years.

What can the Russians get in return, if they “agree” on Assad’s departure and on a protracted war with the terrorists? Presumably, the White House will promise to “consider the issue” of easing sanctions.

The Kremlin’s consent to Assad’s departure in one form or another and drawing Russia into a “new Afghanistan” would mean a major geopolitical achievement of the United States and a loss in the international arena of Russia and Iran. Of course, B.H. Obama would record this achievement in a small list of his foreign policy victories. He would have a valuable topic for memoirs. He would have remembered both the sanctions and his phrase about the "torn to pieces" Russian economy. And after that, he would not have looked like a political loser. Perhaps the president would even have gotten to the cover of "Time" in 2016.

Recall that Obama has only a year left to join the ranks of the great politicians of the world.

Observed and commented on Oleg Chuvakin
- especially for topwar.ru
Ctrl Enter
Noticed oshЫbku Highlight text and press. Ctrl + Enter
We are
Bashar al-Assad: In Syria, not the “revolution” that the enemies are talking about, but the revolution of the army and the people against terroristsSyria: Americans scare themselves, and Asma Asad buys chairs
Military Reviewin Yandex News
Military Reviewin Google News
144 comments
Information
Dear reader, to leave comments on the publication, you must to register.