Do without machine guns 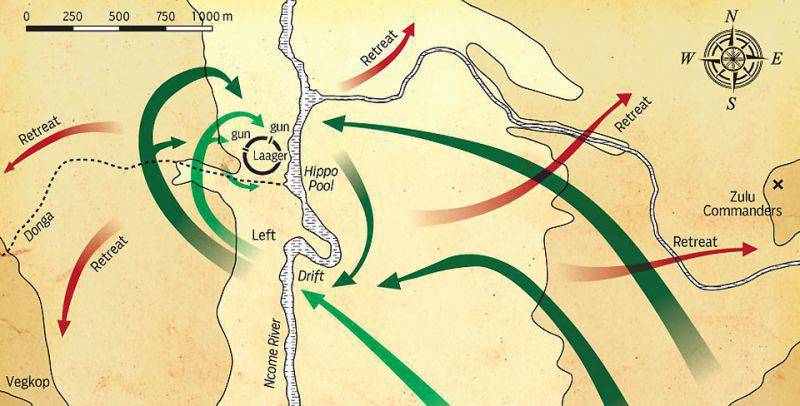 16 December 1838 of the year in South Africa, along the river Nkome, a battle took place between Dutch settlers - the Boers and the militia of local Zulu tribes. However, it would be more correct to call it not a battle, but a slaughter, because the Boers, armed with flint and capsule rifles, as well as two small cannons, with impunity shot them trying to attack their Zulus, armed only with spears and wooden clubs.

A detachment of Boers under the command of General Andreas Pretorius, who invaded the Zulu lands, learned from equestrian scouts about the approach of large aboriginal forces, took refuge in a wagenburg from wagons built on the cape between Nkome and the dry riverbed of Dong. The high steep banks of Nkome and Dongi reliably defended the camp from the east and south, allowing them to concentrate all their forces in the north and west.

Pretorius had only 464 shooter and 200 unarmed black servants, and Zulu's supreme leader Dingane, according to various sources, from 15 to 20 thousands of soldiers, of whom about 10-12 thousands participated directly in the battle. However, such a significant numerical superiority of the Negroes did not help, as the shaman's potion, distributed before the battle to all the fighters and, according to the witches, made them invulnerable, did not help them either.

The Zulus forced the river south of the Boer camp and bravely attacked him four times for four hours, but all four attacks were beaten off with huge losses. Buram was greatly helped by the fact that many shooters had two to three muskets, which were reloaded by servants during the attacks, and this made it possible to ensure a high rate of firing. To increase the likelihood of hitting, the Boers shot grapeshot, letting the enemy go 20-30 meters. Because of this, they did not miss, virtually every charge hit the target.

By the end of the battle, the killed and seriously wounded Dingani warriors lay around the wagons on top of each other in several layers, but no one was able to break into the camp. According to the memoirs of one of the defenders, the Boers feared only that their ammunition would run out before the Zulus had morale. But the fears were in vain. After the reflection of the fourth assault, the Boers saw that the surviving enemies were retreating.

Then many of them mounted their horses and went after them, continuing, as if on a hunt, to shoot the Zulus from a safe distance. The Aborigines did not have cavalry and even bows, and therefore they could not oppose anything to it. The shooting continued until the Boers had run out of charges for muskets.

As a result, the Zulus, according to the Boers, lost about three thousand people killed and died from wounds, and the Boers themselves had no irretrievable losses and only three shooters were injured with throwing spears - assegayas. Enraged by the defeat, Dingane ordered the execution of his adviser Ndlelu ka Sompisky, who commanded the troops on the battlefield.

The Zulus, who had no written language, left no documents and memories of the battle, but after that day they began to call the river Nkome the Bloody River. In South Africa, before 1994, December 16 was celebrated as Oath Day, as Pretorius soldiers swore before the battle to thank God for building a church in case of victory. But after the abandonment of the policy of apartheid and the coming to power of the Negro party, the African National Congress renamed it the Day of Reconciliation and Accord.

In conclusion, it should be noted that a sudden night assault would undoubtedly give the Zulus more chances. However, they did not dare to attack at night. They were frightened off by trucks mounted by drills and not dying away even in the rain. The aborigines decided that this is some kind of witchcraft, from which it is better to stay away. And on the screen saver, as it is easy to guess, the scheme of the battle at the Blood River. 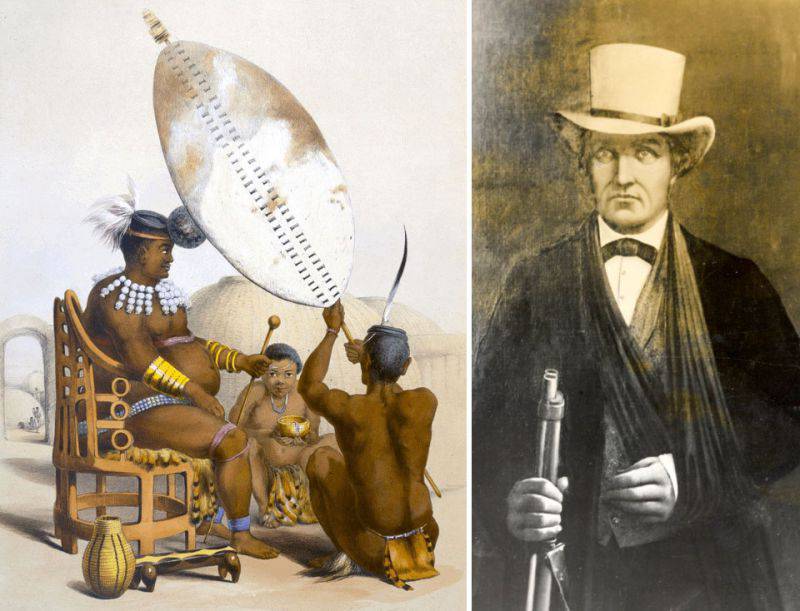 Chief Dingane with servants and General Pretorius. He was one of three Boers who were hooked on Zulu spears in the Battle of the Bloody River. 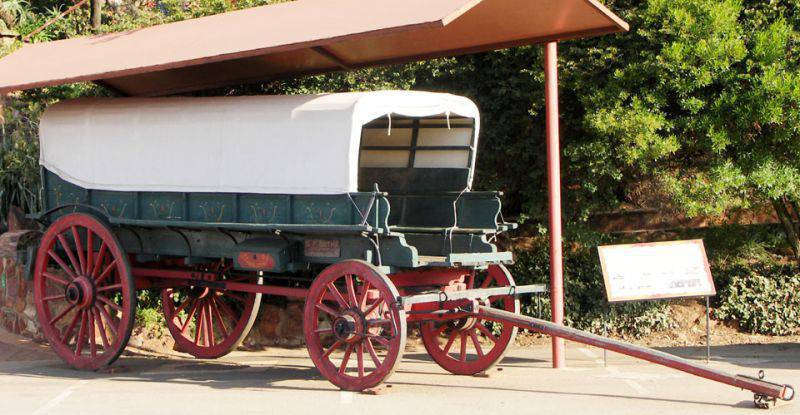 Boer vans, which during the wars with the Zulus were used for the construction of improvised fortifications. 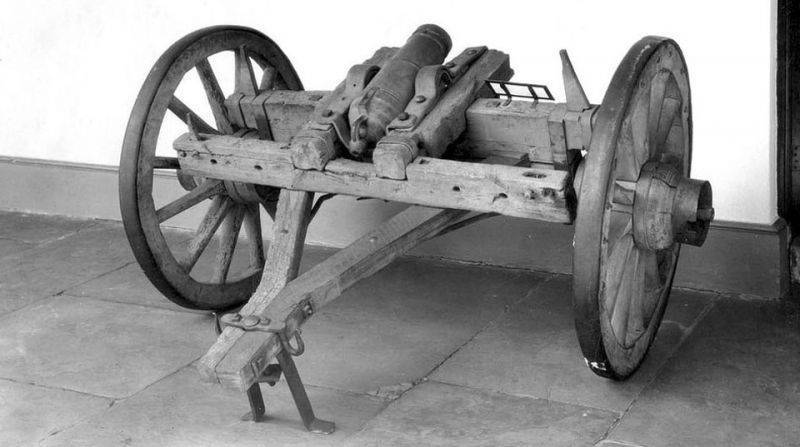 One of the two cannons used by Pretorius soldiers in battle with the Zulus. As can be seen in the photo, the vertical guidance mechanism of the trunk is absent, so it was induced by raising and lowering the trunk of the carriage. 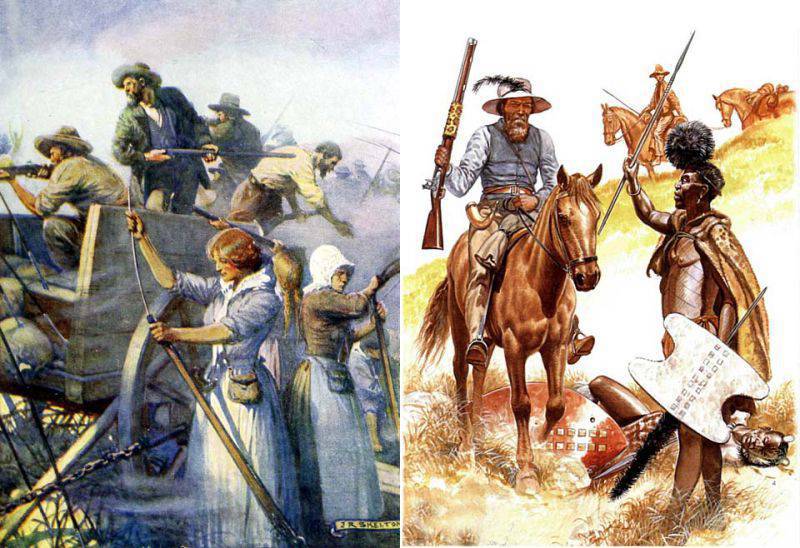 On the left - the Boers defend the wagenburg. In the picture, the guns are loaded by women, but there were no women in the Pretorius squadron, and in the battle on the Bloody River, servants were engaged in this. On the right is the Boer equestrian arrow with a flint musket and a Zulu warrior with a short throwing spear. 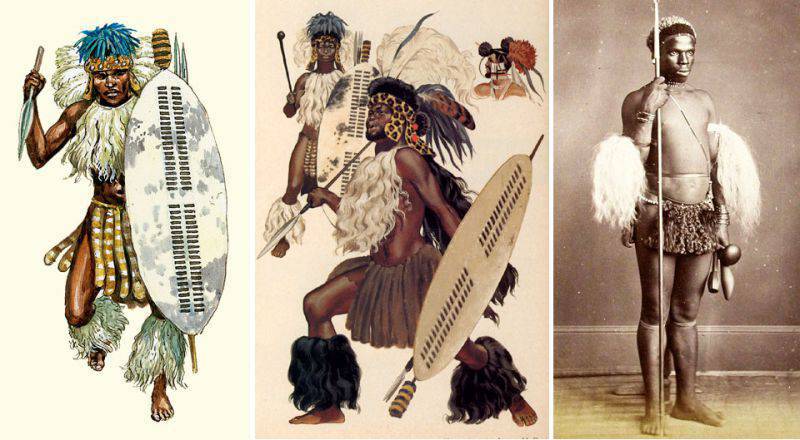 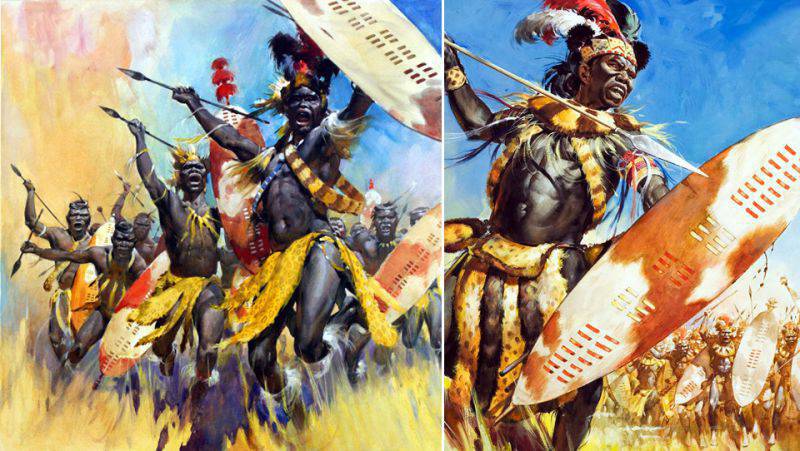 Zulus in the attack.