Peter Connolly on Celtic helmets and chain mail (Part of 4)

December 23 2015
49
In antiquity were weapons fist and nails and teeth.
After the stones and branches of the trees of the dense forest ...

Later, another person knew the power of bronze with iron.
Only first in the run was bronze, and later iron.
Titus Lucretius Kar "On the nature of things"

Archaeologists can say lucky. Celtic helmets are found in a variety. Their descriptions left us and the ancient authors. But what is interesting: for example, the description of the Celtic helmet, left by Diodorus, does not correspond to the information that is provided to us by archeology. It appears from them that the helmets of the Celts were bronze and decorated with a helmet decoration, which made their owners visually much higher. He also reports that they could have the shape of horns, or the type of bird or beast. And such helmets found, but they are not massive. 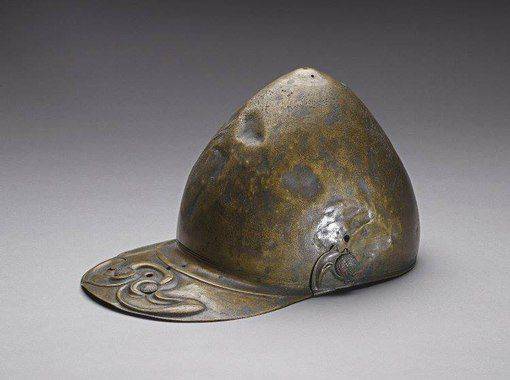 For example, in the area between Ancona and Rimini, the territory where the Senons settled, helmets were found with a visor in the back and a slight sharpening in the upper part. Such helmets were given the name of the Montefortinsky - by the name of the burial, where they were first found. The material for them was armor and, most likely, appeared in Italy at the same time as the Senons. 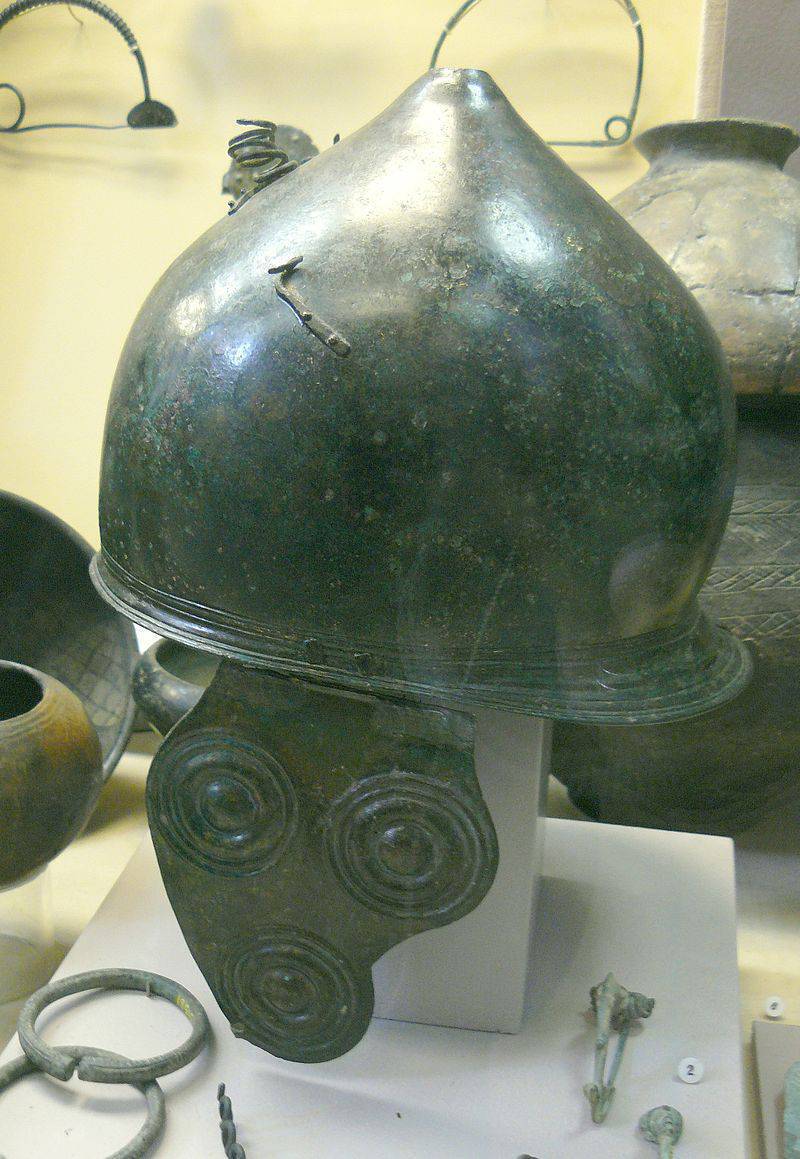 True, the classic Montefortinsky helmet, in addition to the backstop and the rather elongated camo, also had cheek pads, and the early helmets in the burials of the Senons did not have them. In 282 BC This Celtic tribe of the Romans ousted from his places of residence. So helmets found in Senonian burials should be made before this time. The material from which they are made is either iron or iron and bronze, and only occasionally they are completely bronze. On some there is a complex holder for some unknown helmet that looks like a double plug. 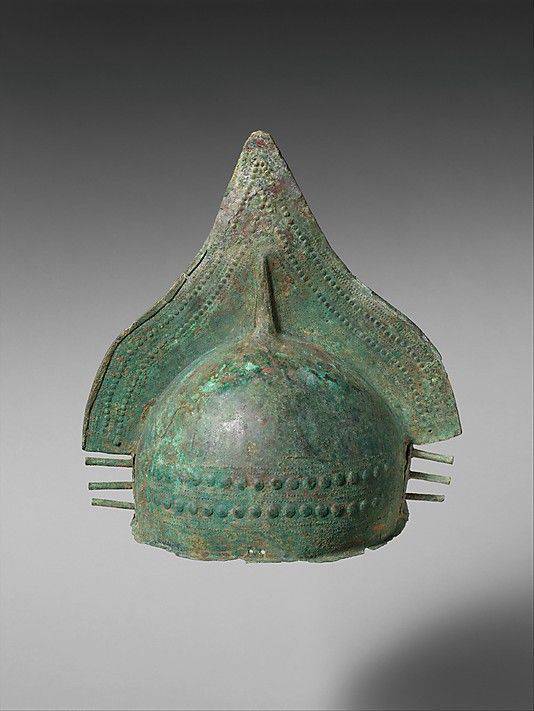 The people of this culture were the first to start processing iron in the territory of present-day Italy, and they also cremated their dead with the subsequent burial of their ashes in urns in the form of a double cone.

The helmet already has such a helmet, and, interestingly, they all have the shape of a triangle consisting of three convex disks. It is so much like the breastplates of the Samnite shells, that one might think that either the Samnites looked at these cheekbones when they made their shells, or the Senons copied them from the shells belonging to the Samnites. In the III. BC. their form was simplified, they became completely triangular in shape, and instead of the discs, three “bumps” appeared on them. The Italians themselves, however, quickly adopted the Montefortine helmets from the Celts and used it very widely. For example, on a helmet found in Bologna, there is an inscription in the Etruscan language, which makes it possible to date it to the time when the Etruscan people had not yet left the area. But this helmet also received universal recognition throughout Western Europe, and not only in Italy.

Such helmets were found in Yugoslavia, you can also see it on the victorious frieze in Pergamy, and it belonged to the Galatians obviously. Although the Celts were ousted from Italy by the first quarter of the 2nd century. BC, Montefortinsky helmet did not disappear anywhere, only to make it steel from iron. The lugs changed their shape a bit, but, as before, they remained the main recognizable feature of these helmets, which became the main type of helmet of the early Roman army, in which they were used ... for four centuries! According to experts, they could have been made about three or four million, so it is not surprising that their findings are so frequent. 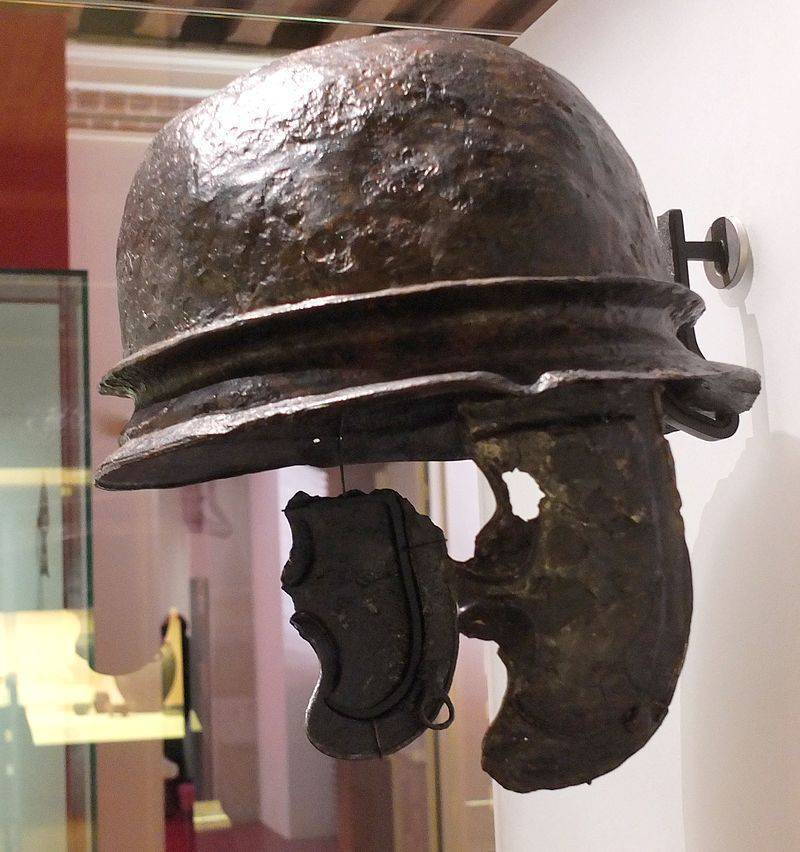 There was another type of helmet, similar to Montefortine, but without a “bump” on top of it. Such a helmet is called “Kulus”, after a pattern found in France. According to Connolly, he did not have such success as Montefortina, but was still widely used in the first century. BC. Its origin can be as ancient as Montefortinsky - one of them, discovered in Senonian burial, is a specimen from Hallstatt burial, which can be attributed to 400 BC.

Some of the helmets have something like wing-shaped decorations on the sides, similar to the wings of Samnite helmets. It is believed that had spread in the Balkans in the III - II centuries. BC. On the arch in Orange you can see hemispherical helmets with visors and horns. And again, an amazing example of a horned helmet of a clearly ceremonial purpose was found in the River Thames near the Waterloo Bridge. He was called so, but he is clearly not fighting, although many artists have not escaped the temptation to put it on the heads of warriors participating in the battle! Well, helmets with animal figures, described by Diodorus, are extremely rare. Actually, archaeologists have found only one such instance. And they found him in Ciumechti, in Romania. Again, this is a typical Monterfontian helmet “with a knob” and a figurine of a bird on its top. The wings spread to the sides have loops, and, in theory, they can clap during the race, when its owner raced across the battlefield. 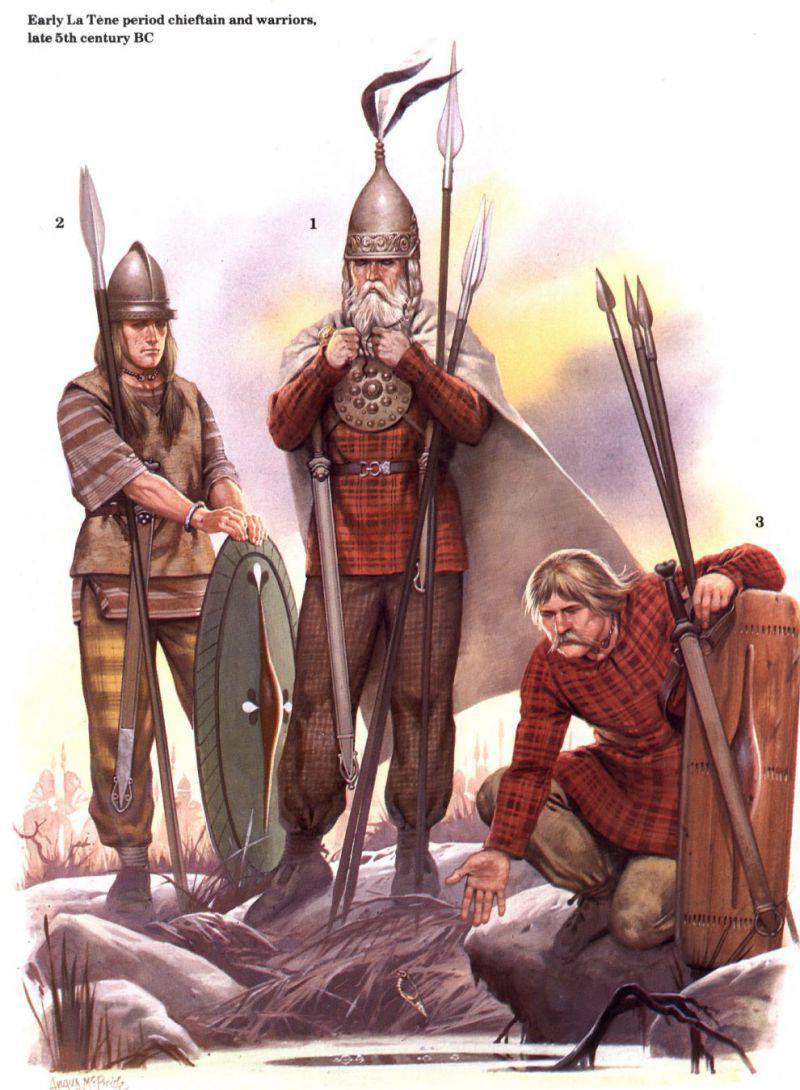 In a number of Celtic burials in northern Italy, Etruscan helmets belonging to the Negau type were found. It is also a spheroconical helmet, but with a transverse ridge and rim. And the Celts borrowed this type, which is confirmed by the finds of helmets of negga in the area of ​​the Central Alps, that is, in the places of their residence.

In the 1st c. BC. Two new helmets, related to each other, entered into use at once. Therefore, it is customary to combine them into one agent-port type. The first one is an Agen type that looks like a “bowler” with fields, and the port “bowler” has a large backstop. The lugs on them are of a new type - the one that the Romans later adopted. It is believed that the port type is the direct prototype of the so-called Imperial Gallic helmet of the first century. AD Samples of these helmets, made entirely of iron, are found in northern Yugoslavia, in the Central Alps, and in Switzerland, and in many parts of central and southwestern France. All these places - the Roman frontier at the beginning of the first century. BC, so it is not necessary to be surprised at their localization. 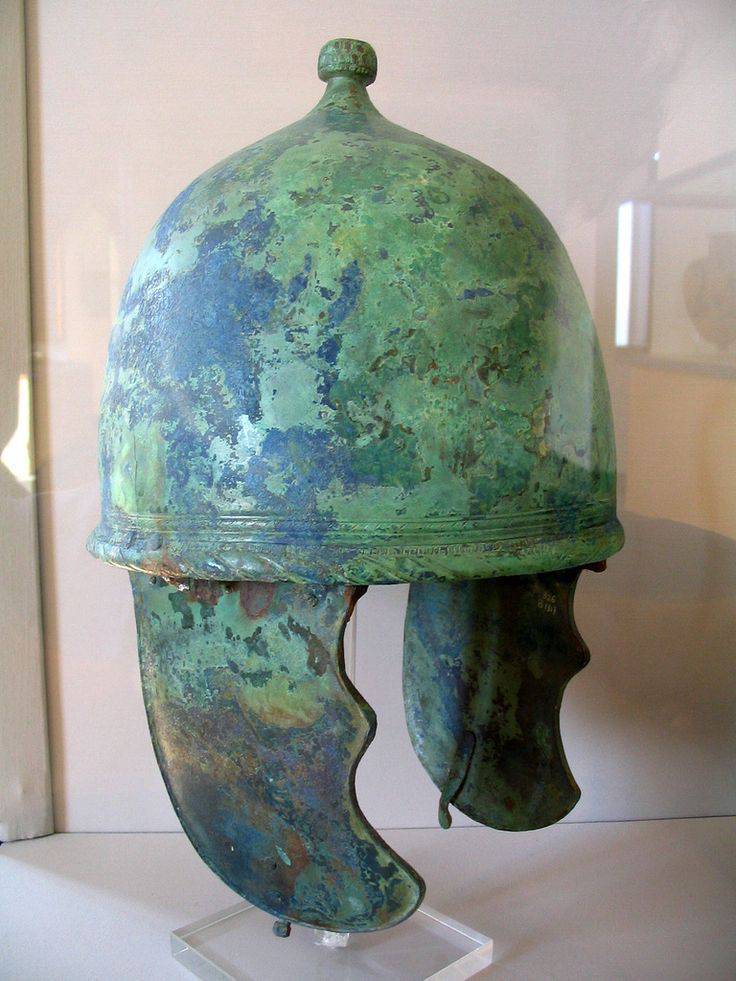 Splinters from Alesia in central France in the 1st century BC. They are a rather strange mixture of the classic Italian type, because they are decorated with “knobs” and “three-disk” old types. There are also finds of conical Greek-Italic helmets, with characteristic Celtic ornaments. Why is that? Obviously, a lot of weapons were captured as trophies. The helmet is broken, but the paddles are intact: “we take it and put it on a new helmet!” It is possible that blacksmith accessories were also captured — matrices, punches for forging, well, what was then used there and again used in their own interests. Apparently, the Romans were practical (and all sources say this!) And did not consider it a betrayal to use other people's armor.

However, most of the Celts fought without armor. Diodorus writes that they smeared their heads with lime and brushed their hair on the back of the head in such a way that they resembled a horse's mane that stood upright. We see this hairstyle on a few coins, so there is no doubt that this was the case. Perhaps it was through this that the crest appeared on the helmets, only they made it not from their own hair, but from horse hair! 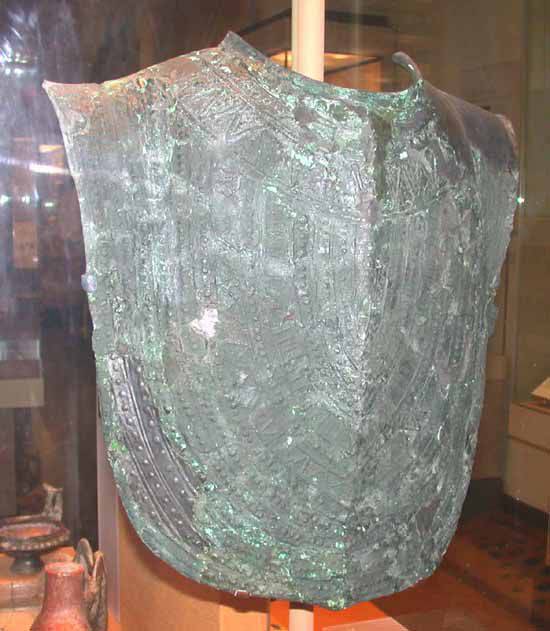 The shell, made in the form of a cape from Etruria. Museum of Philadelphia University.

From 420 - 250 BC. Only a few bronze disks, which could be called chest plates, have come down to us, although this could be ornate horse harness. The statue of Grezain from the south of France, dating from the IV – III centuries. BC, shows us a warrior with armor in the form of a square chest plate and a dorsal plate on belts. But this statue cannot be called typically Celtic; maybe she generally has nothing to do with them!

According to Peter Connolly, the Celtic chainmail appeared around 300 BC. And this is despite the fact that they did not have any predilection for armor. It was not, but somehow came up! Kolchugi calls the Celtic Strabo. And indeed the earliest examples of chain mail were found in Celtic burials! But since mail was an extremely time-consuming and expensive thing, only Celtic aristocrats could use it, and maybe ... priests ?! 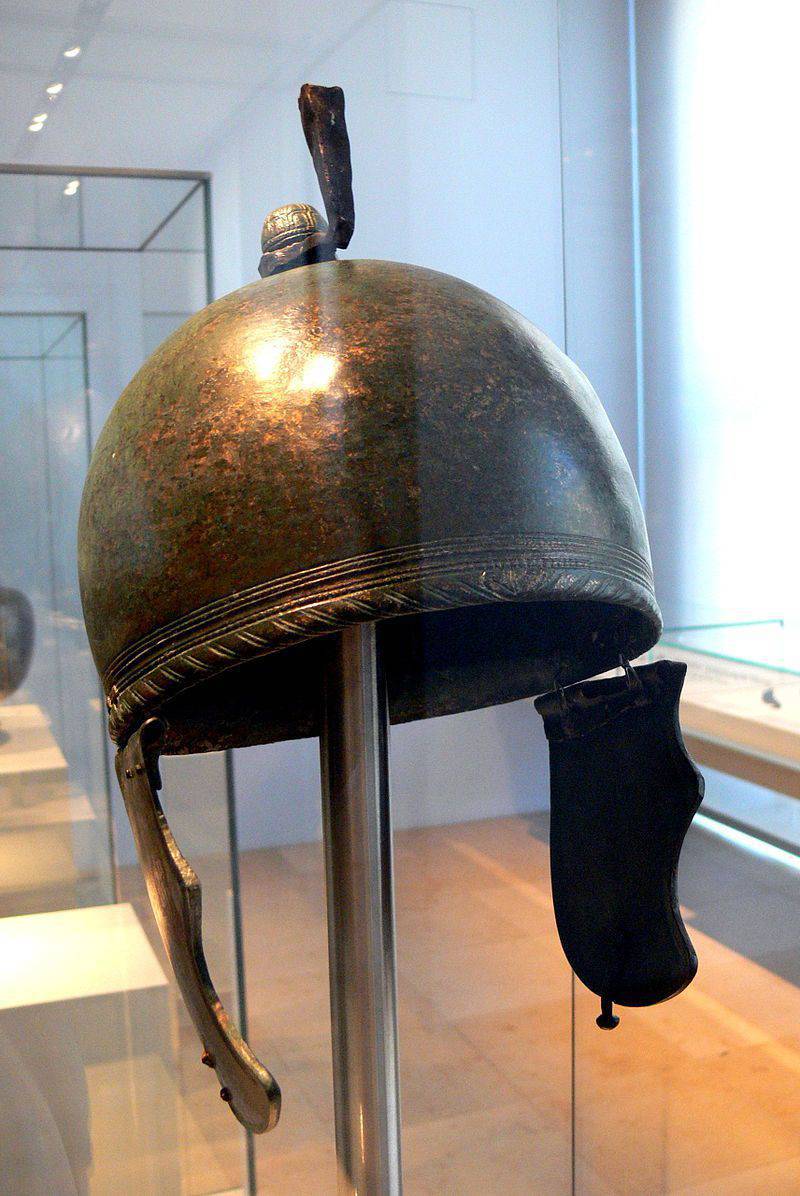 Bronze helmet from Montefortino with lapels. I century BC er., found in the Rhine near Mainz. German National Museum (Nuremberg, Germany).

On different statues depicting soldiers dressed in chain mail that were found in southern France and in northern Italy, two types of this armor can be seen: one with wide shoulder pads in the form of a cloak; and the second, which resembles the Greek flax shell without the pelerine. Probably, the first type was just the original Celtic.

In Romania, in the burial of the III. BC. they also found fragments of chain mail, and maybe even not one, since one part of the rings consists of rows of alternating stamped and butt-joined rings, and on the second all rings are riveted. Such weaving is considered more reliable. The diameter of the rings is approximately 8 mm. The shoulder pads of the chainmail in the form of a Greek linen shell were fastened to her chest. That is, at that time they could not think of chain mail with sleeves, short or long, but the Celts simply took the flax shell and replaced it with a flexible fabric with flexible mail! 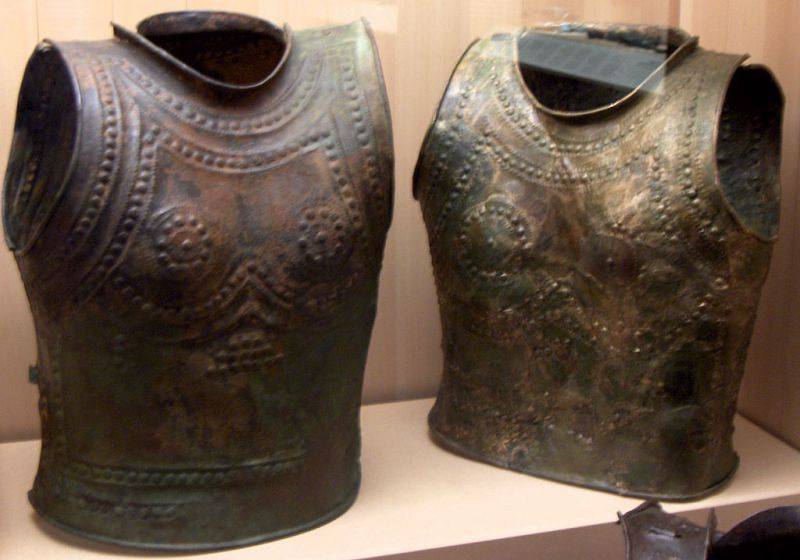 Diodorus, however, very often writes that the same Gauls went into battle naked. At first, it probably was, but he himself describes the time more later. So, for example, Polybius describes the Gazats, who crossed the Alps, to fight along with the Celts in the battle of Telamon in the 225 year. And here they just adhered to old customs. And all the other Gauls were wearing pants and light cloaks. Well, and at Caesar the Celts fought already fully clothed!

For comparison: the armor of the Greek hoplite from the museum in Argos. 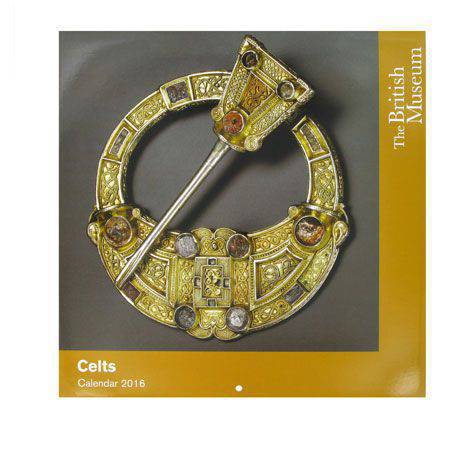 Celtic culture is very popular in the West (and why it is so clear!). Here is a wall calendar for 2016 year with the image of the Celtic antiquities of the British Museum can be bought in its walls for 9,99 pounds sterling.