What can a ship do ten tons of explosives? 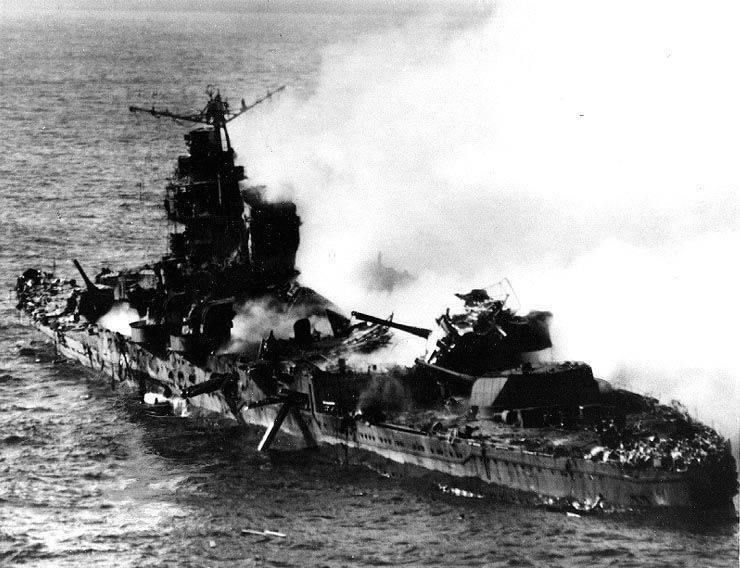 Twenty-four "Long-Lance" so mutilated "Mikumu" that the cruiser has ceased to be like a warship. An hour later, his wrecked skeleton was photographed by an American plane, that shot became a symbol of victory at Midway. Left by the crew, the cruiser was still floating, but its fate was sealed. The destroyers sent to search the next night did not find anything but floating debris ...

The paradox of the death of “Mykuma” is in the very possibility of keeping afloat after the detonation of torpedo ammunition. Each “long-lance” contained 490 kg of THA explosives and an oxygen cylinder with a capacity of 980 liters. The explosive mixture multiplied by twenty-four is the equivalent of 40 ... 50 to European or American torpedoes! 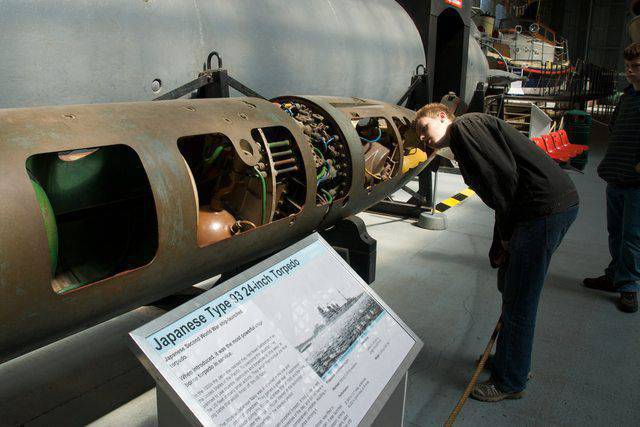 Under normal conditions, two or three hits of torpedoes were enough to knock the ship into the abyss in a matter of minutes. And here - the cruiser did not even fall apart in half.

The paradox is explained by the laws of nature: an explosion in the air by its destructive force is ten times inferior to the underwater. That is why a single torpedo under the keel is able to break the ship in half, but even a whole rack of such torpedoes cannot lead to the instantaneous death of the ship, when they are detonated above the waterline.

But can everything be explained only by differences in the properties of the medium? Russian researcher Oleg Teslenko draws attention to many other oddities in this naval detective story.

Having lost four aircraft carriers near Midway, the Japanese decided on the last decisive step: to shoot the damned atoll from the guns of their cruisers. Forward on the 35 nodes rushed “Kumano”, “Suzuya”, “Mogami” and “Mikuma”. When it was less than three hours from the atoll, an American submarine was spotted ahead. The cruisers began a dodge maneuver, during which the Mogami struck Mikume with a ram attack. The collision of two 15 thousand tons of hulks did not pass without consequences for both: the entire nose of the “Mogami”, right up to the first tower of the Civil Code, turned to the side of 90 degrees! And in the fuel tanks "Mykuma" formed 20-meter hole, which, to all, served as a source of treacherous oil trail.

“Kumano” and “Suzuya” retreated in full swing to the north-west, and two losers went around on 12 nodes, praying that they would not be noticed by the Americans. Naturally, they were noticed. And the fun began.

The first attack was successfully repulsed by anti-aircraft means of the ships. The pilots of the Marine Corps did not achieve a single hit, only by “refreshing” the cruiser with clouds of fragments from close explosive bombs. The only vivid event was the death ram: Dick Fleming's wounded plane repeated Gastello's feat, ramming the Mikuma TKR (fragments of the plane can be observed on the main figure, on the roof of the fifth tower of the Civil Code). However, this had no particular effect: the cruisers continued to retreat into the open ocean.

The end came the next morning. The Mogami and Mikuma already badly battered for the previous 24 hours (if not more) were hit by airplanes with the AB Enterprise, (more than 80 sorties in total). And, probably, this could have been the end of this story, if not for one BUT.

“Mogami” returned home under its own power. But his sistership died.

At first glance, everything is explained by the fatal detonation of torpedo ammunition on board the “Mikuma”. The crew of the second cruiser managed to avoid this by throwing all the 24 torpedoes overboard immediately after the navigation accident at Midway. 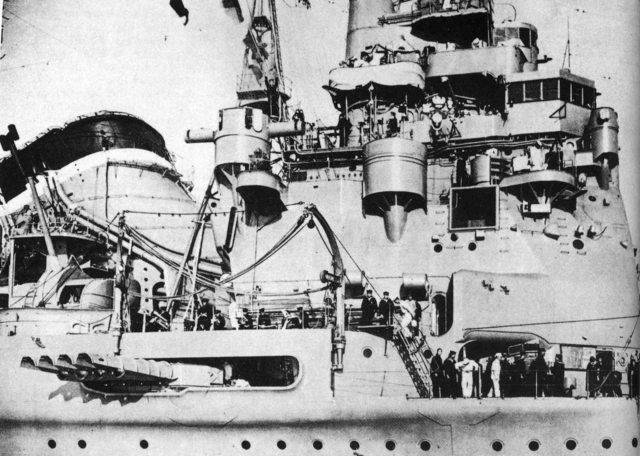 The presence of torpedo weapons on Japanese cruisers is still considered an ambiguous decision. With the help of this weapons many brilliant victories were won (the sunk cruisers of the Allies “Java”, “De Reuters”, “Perth”, “Houston”), but the price was too high. Three of the four Mogami-class cruisers became victims of the detonation of their own torpedoes. Perhaps the whole point is the unsuccessful storage of oxygen “Long Lances” in unprotected compartments and SLT on the upper deck? It is quite possible ... But we will again be transported to the central part of the Pacific Ocean, to the hot waters at Midway Atoll. There, where on June 7, 1942 the American deck aviation tormented by the barely alive Japanese cruisers. Moreover, with very paradoxical consequences.

What is the reason for the miraculous salvation of one and the death of the other? After all, “Mogami” and “Mikuma” belonged to the same type and were identical in design. Moreover, if you rely on official data on the course of the battle, the miraculously escaped “Mogami” received much more damage than his comrades!

Torpedoes are just a consequence. And here is the root cause: during the air attacks, both cruisers received FIVE direct hits from the bombs (not counting the numerous close gaps and the plane crashing on the Mikumu).

Hits in “Mogami” came in including. to the aft tower of the Civil Code (the entire cannon servant was killed), to the middle part of the ship in the MO region (fire in the torpedo repository, fortunately for the Japanese - empty), as well as to the nose bow area of ​​the Civil Code, just before the superstructure. As a result, the disfigured “Mogami”, after refueling in the ocean, developed 20-nodal speed and returned safely to the base. 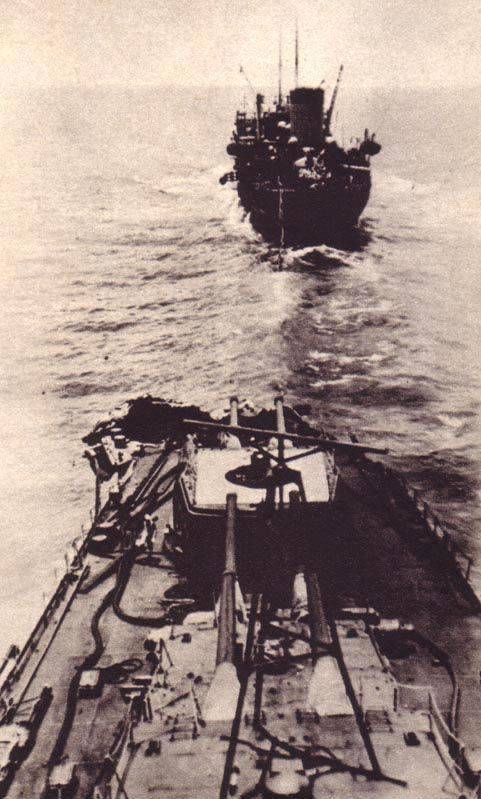 Refueling the damaged Mogami from the tanker Nity Maru, after which the crew of the cruiser eliminated the need for fuel economy. And the opportunity to increase the course

And here’s the main question of this article: could the 500-pound American bombs penetrate the Mogami 35-mm deck?

What if so? So the explosions thundered below the main armored deck, in the engine rooms and the ammunition cellar ("... right in front of the nose superstructure"). Hundreds of kilograms of explosives and tens of thousands of heated fragments, riddled all bulkheads and turbines. Not to mention the consequences of getting into the ammunition.

And the ship, as if nothing had happened, returns to the base. The speed of 20 knots with a severed nose - means that the entire cruiser propulsion system operated at maximum power. Despite the allegedly riddled turbines and steam lines.

It turns out that the thin 35-mm deck proved to be an insurmountable obstacle for 227 kg bombs. Otherwise, it is not possible to explain the results of that fight.

The bold conclusions of O. Teslenko are somewhat lost against the background of damages of the same type “Mikuma”. Five bombs - two each at the left and right side Defense Ministry, as well as into the tower of the Civil Code No. XXUMX. Officially, the cruiser lost the course. On board there was a strong fire, which, after an hour and a half, led to the detonation of the torpedo ammunition. After that, the Mogami and two destroyers removed the surviving crew members of the Mykum and moved further towards the Wake Atoll.

Even with the naked eye it is clear that there is a logical inconsistency in the description. The heroic hour and a half standing under the continuous attacks of American aircraft. What did the Japanese expect? Wanted to look at the fireworks? When torpedoes jerk on the burning immobilized cruiser.

One of the laws of the sea war: as soon as a ship loses a turn in a combat zone, a command is immediately removed from it, and the destroyers are killed off the damaged one. The slightest delay threatens the death of the entire squadron. This rule was followed by all naval commanders at all times.

With great probability, this was the case. A fire was raging on Mikume, but it never slowed down below the 12-14 nodes. Also, as his “Mogami” sistership, where the fight against fire also took about an hour.

Not a single fragment of the bombs could penetrate under the armor deck and disrupt the operation of the ship’s machinery. The hits in the middle part of the “Mykuma” ignited the torpedoes that were there. At first, it did not threaten the ship until the fire reached the combat charging compartments, which were stored separately from the torpedoes. An hour and a half later, an explosion thundered, which completely destroyed the cruiser. Although it did not disperse the “Mikumu” into dust, as might have been expected from an explosion of 50 torpedoes.

Similar история occurred three decades later, 30 August 1974, on the roads of Sevastopol. The explosion of ammunition on a large anti-submarine ship "Brave".

In total, the two drum shops of the Volna aft air defense missile system had 15 B-600 anti-aircraft missiles. And this is serious. The first stage of the rocket consisted of a solid fuel accelerator PRD-36, equipped with 14 cylindrical powder checkers, with a total weight of 280 kg. The second stage directly represented a rocket made according to the aerodynamic “duck” scheme with a solid fuel engine containing 125 kg of solid powder. Warhead - high-explosive type, with ready-striking elements. The total weight of the warhead was 60 kg, of which 32 kg is an alloy of trotyl with hexogen, the rest is shrapnel.

Six tons of explosive substance and half a ton of the most powerful explosives! Such an explosion could be enough to overturn the firmament and disperse the entire Sevastopol raid.

Despite the terrible internal explosion, the small BOD (5000 tons, which is half the size of modern destroyers and three times less than the mentioned Japanese cruisers) lasted more than five hours, and all this time his crew fought desperately for the survivability of the ship. The rescue works of the “Brave” were stopped when the fire began to threaten the storage of aviation fuel and the cellar with depth charges. The victims of the tragedy were 19 sailors.

How do their relatively light warheads, the content by mass is ten times less explosive, cause such terrible destruction to ships?