Does the "hang more" principle work?

December 21 2015
26
Literally, just on the Web, including at VO, there was a material about the next improvement of the BM "Terminator", the model of which was presented at the exhibition "Innovation Days", which was held in October in Yekaterinburg. A fashionable word, a spectacularly painted model, literally spiked with various types of weapons. But is it as effective as it seems to put various means of destruction on a combat vehicle and thus increase its damaging power by several times? 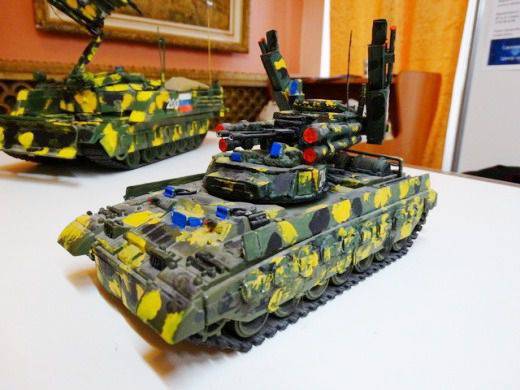 It is not easy to give an unequivocal answer to this question, but you can try it by first turning to stories. But how did the improvement of the existing serial models of BTT go? What ideas and principles guided the designers? After all, the Terminator BMPT is also an improvement, so all this will be correct in its attitude. 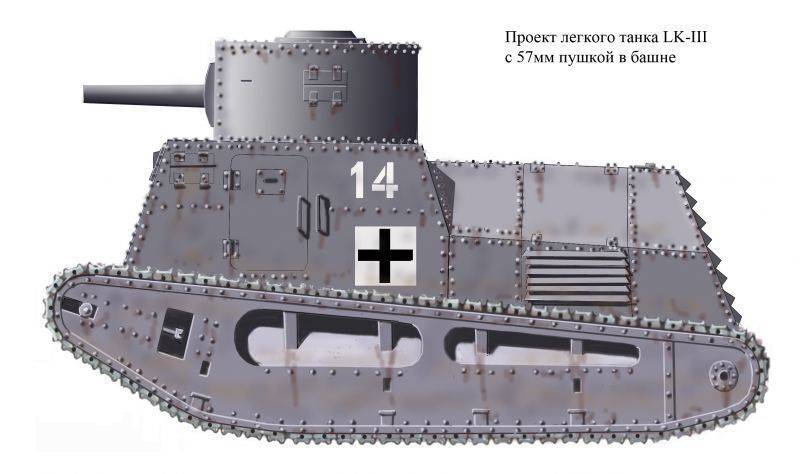 For example, a German project tank LK-III with a 57-mm cannon in a cylindrical tower. How does it differ from the LK-II tank, which, incidentally, didn’t hit the battlefield, although it was tested? It differs only in that it was deployed "backwards." In the base model, the tower was aft. This limited the driver’s field of view right on the course and again didn’t allow him to shoot straight ahead in the trenches. At that time, shooting from a tank almost point-blank was very important, so the Germans decided to rearrange the tower forward, and the engine back! Good idea, but never implemented in practice.

The Swedes in 1932 decided to create an “unobtainable” armored car, covered with armor from all sides. And created! Moreover, they closed all their wheels with armor, including spare ones, which, turning, helped to overcome obstacles on the battlefield. A cannon forward, a machine gun back, a machine gun in the turret ... And what is the result? As a result, the turning angle of the wheels was severely limited by the bronelists and the car lost its maneuverability and could act only on the roads. Of course, on the roads, especially in Sweden, you also need to fight, but isn't it too luxurious: a special BA only for roads? And it ended with the fact that these BA did not go! They were replaced by much more traditional Landsverk machines. 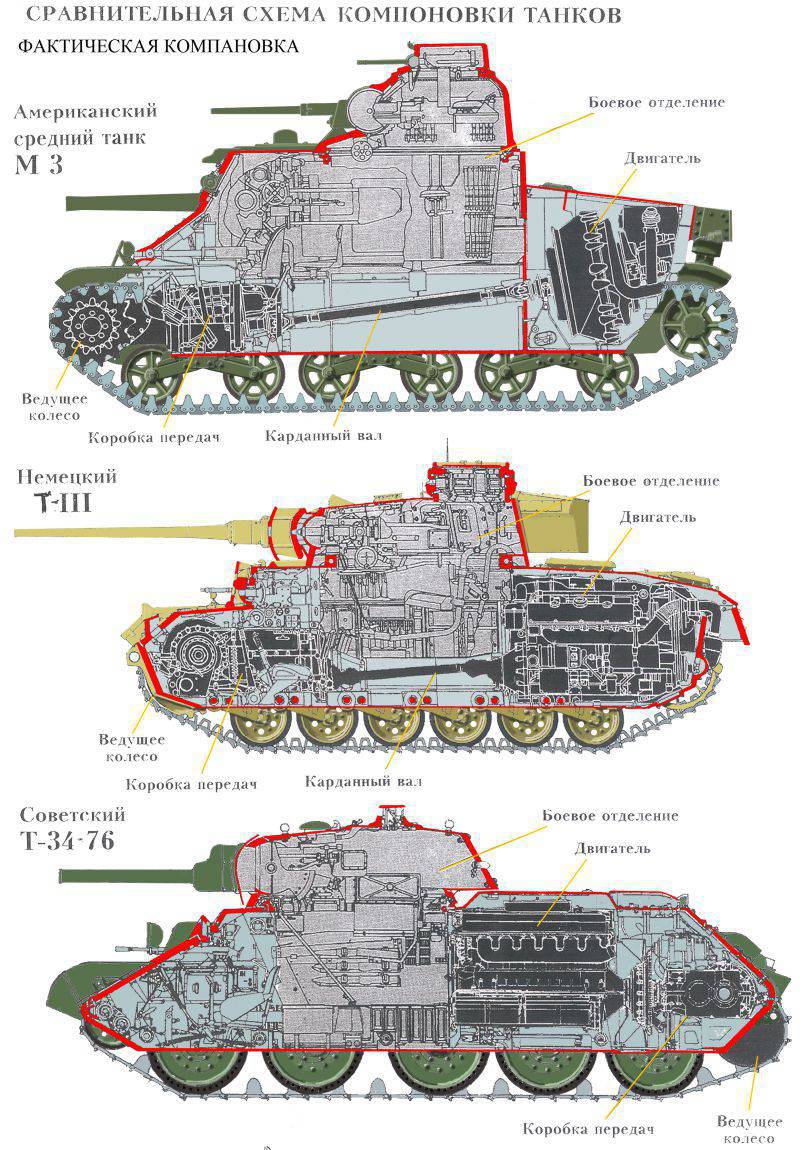 Colossal importance is played by the layout of the tank. Here is the traditional layout of three tanks of the Second World War: М3, Т-III, and Т-34. It is an axiom that the longer a tank is, the greater its agility with all its other characteristics, although it will overcome wide moats. Hence the compromise: a very long tank is bad on the one hand, and very short on the other! Of these three tanks, the shortest T-III, and its "briskness" has always been an unpleasant surprise for the gunners and the Soviet and Anglo-American tanks. In T-34 a lot of space is occupied by the engine and transmission. It is obvious. No wonder it was already then that the T-34M planned to put the engine across to make it shorter. So if the war had lagged a bit, we would have seen a completely different legendary tank on the battlefield!

About the American car can not be repeated. Due to the unique location of the engine, the tank came out very high, which means it was a good target!

And now let's see what the installation of an American type air-cooled engine would give to all these tanks. Well, on the M3 this engine could be rearranged and ... what then? Let's start with the M3. It was enough to install it horizontally, and not obliquely, at an angle, as the height of the car would immediately go down. Not much, but dropped. Motor maintenance would also be facilitated. True, a coupling with bevel gears would be needed, but technically it would not be very difficult to make one. In any case, the level of development of the American technology allowed it. For the T-III, replacing the engine in terms of dimensions would not have played any role, but since the American engine was more powerful than the German one (340 hp vs. 285 hp), the speed qualities of the German tank would increase even more! 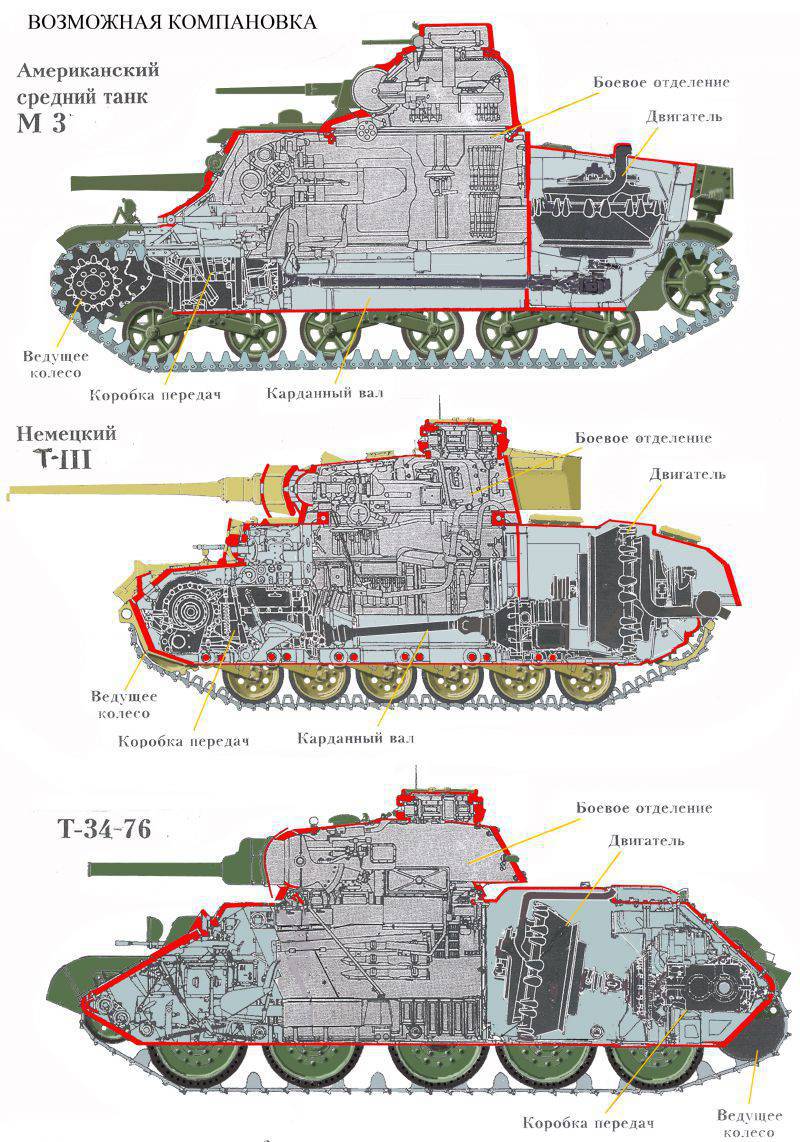 For T-34, such a replacement at first glance would be a blessing. The size of the engine compartment would be reduced. The tower could be moved back. Transfer hatch to the roof of the hull. The centering would also improve, that is, the maneuverability too, but ... The Continental engine power was 340 hp, whereas our B-2-34 had 500 hp. And although some of these forces were eaten by an imperfect gearbox, the replacement would clearly be unequal. Although very profitable in all other respects! That is, the engine would need to be forced to 500 l. with. And this would be reflected in his resource! And then what is the gain?

And finally, weapons. The desire to "hang on a bigger tank" has always been. This is how tanks with two guns were born in one turret, so tanks with three guns were born in three turrets, and the strange thing is that the designers did not teach the experience of these cars! Already at the end of the war, German designers prepared the design of the Maus-2 tank. Probably they didn’t like “just the“ Maus ”and they decided to“ improve ”it. Together, the turrets with two guns (128-mm and 75-mm) were asked to put a tank from the Panther-II with an 88-mm tool and a tower with an 150-mm short howitzer on the tank. Needless to say, nothing came of this project, since the German industry was breathing its last. But even if these tanks had gone, then again they would manifest the same drawback as the previous multi-turret machines: what goal should be considered a priority, and which one should we choose for which tool? In theory, the upper tower hits the infantry, the lower one on the tanks, but in a real combat situation, the human psyche is often simply incapable of adequate solutions based on choice! The fewer opportunities to choose, the faster the reaction! And then ... as long as they decide "from what to whom", while choosing the position "I prefer this way", some single-barreled "St. John's Wort" would surely sneak up on this monster and slap him only one projectile, but 152-mm , very powerful and ... no choice!

Modern technology has untied the hands of designers, so that tanks can now be made very different. Fig.1 is the layout of the Armata tank, but with an electric propulsion system. Why? Because the Americans very loudly announced that they were working on a fundamentally new chassis with electric propulsion. And this car was supposed to be the basis for the new BMP, but ... it did not! That is, the arrangement of the three-person “shoulder to shoulder” thing is a good thing, but with electric propulsion, as from the time of “Saint-Chamonix” and “Ferdinand”, the matter hasn’t been solved, so there is still no breakthrough today. Figure 2 shows a tank with two crew members, robotized to the limit. While this is just an idea, whether it will be embodied in metal, time will show.

“City Tank” is an obsessive “fixed idea” of very many… near-scientific journalists. The military themselves are generally silent. That is, “yes, it would be nice,” but what about the budget? And in theory ... the main crew is in front, and two arrows with turrets on either side of the tower are firing on the roofs and upper floors of the six-barreled Minigun machine guns.

And here again, the possible layout of tanks and combat vehicles of the future. Fig. 1 - the main battle tank with two "arrows on the roofs" or it can be the operators of some systems like UAVs. Fig. 2 - almost completely robotic SAU. Fig. 3 is just something similar to the promising BMTP Terminator, which is reported by the Messenger of Mordovia: the driver in the middle, left and right are the operators of grenade launchers and machine guns in the hull. Behind are two weapon operators in the turret. And then two UAV operators or what is supposed to be put on it? And the situation is about the same as with a multitude of towers - only instead of towers are people who control various weapons systems. And there will not be so many people? Then the very choice will be a hindrance! The last two drawings are heavy infantry fighting vehicles and heavy armored personnel carriers. Why is there no motor in front? And to maintain mobility in any situation! Let it be better to have armor in front, and the engine, in order not to be hit, is behind! Again, these are only ideas; they have not been tested by practice.

Maybe it is easier to do? Create a "tank of support tanks" (or call it the old-fashioned "tank fighter") without any towers, automatic cannons, grenade launchers and missiles in launch canisters vulnerable to bullets and debris. And to place in the hull several heavy high-speed rockets (the variants of their launch are shown in the figure), which only at the expense of their mass will take everything out of their way. Putting on a rocket a kind of cast steel cylinder with TNT inside weight in 100 kg and accelerate it to a decent speed ... Such a “piece” from the flight path will not be easy to shoot down, and if it hits the target, it will demolish the tower from the same “Abrams »Only due to its shock force. 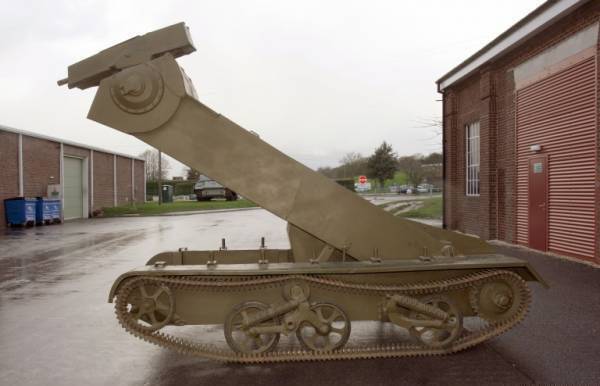 BMPL on the "Terminator" ... well, that is a good thing. By the way, it is interesting that even in 1942, the British created a strange fighting machine called the Praying Mantis with a rising warhead, so as to overlook, so to speak, the terrain and simultaneously comfortably bombard the upper floors and attics of buildings. "Do not go!" Do you know why? The crew, located inside lying, rocked! 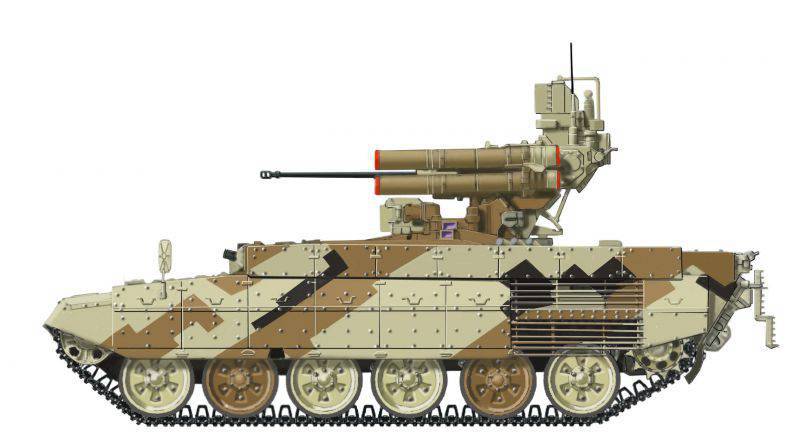 BMPT "Terminator" to the subsequent improvements.

It is clear that in the "Terminator" operators will sit, and they will not rock them, but ... and which UAVs are planned to be installed on this machine? Disposable scouts, battle drones, universal vehicles ... what exactly? Much depends on their purpose. Meanwhile, the hybrid BMP with "Bogomol" has been known for a long time! This is the BMP (project), which has a UAV in the back, connected by cable to the machine and powered by it. It seems that the cable is inconvenient, but it gives you unlimited time in the air. And most importantly - such a UAV will be easy and will be able to carry a lot of weapons. 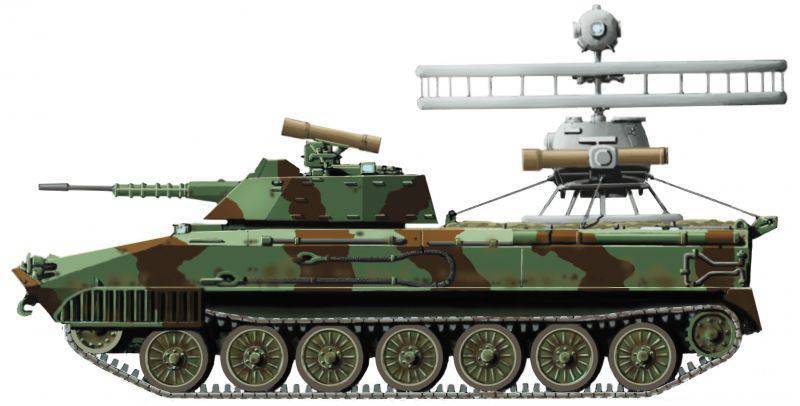 The combat helicopter module seems too large today. You can reduce it at times. And so quite modern design.

And the tactic of using it is simple: he picked it up, looked at it, saw the enemy, launched missiles at it and ... "dive" back into the bushes, I mean, reload onto the BMP site.

Well, as a conclusion: in philosophy there is the principle of "Occam's razor". All redundant entities are "cut off." A tank or a BMP is also a collection of entities, and adding more and more to us ... is it worth it?

Ctrl Enter
Noticed a mistake Highlight text and press. Ctrl + Enter
We are
Innovation Day of the Southern Military District: the main battle tank T-90AInnovation Day of the Southern Military District: airborne combat vehicle BMD-2K-AU
26 comments
Information
Dear reader, to leave comments on the publication, you must to register.