Do not happen to Ukrainians sheikhs

December 18 2015
135
The advanced free press writes about the rich depths of the Crimea. Firstly, analysts pointed to the so-called Dzhankoye oil field - the Russians are rushing it in a hurry. Quickly, of course, will not be devastated, because the stocks there are about the same as in Saudi Arabia. Secondly, in the Crimea, geologists from Russia allegedly found the largest gold-bearing field. According to preliminary estimates, local reserves account for 60-70% of the world's mined gold. 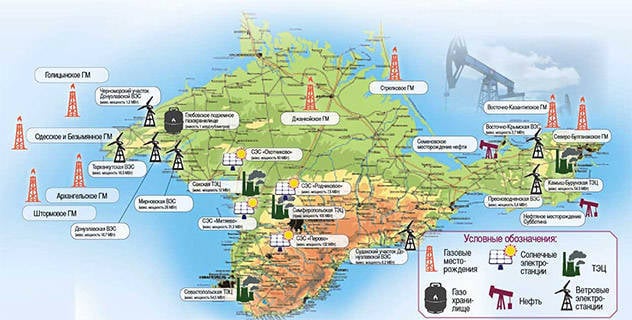 Both "news»Unites one thing: the stories are about the Russians, who, as is well known,“ annexed ”the peninsula not so long ago and now fill the budget with petrodollars, and the Central Bank basements and Putin’s dacha - with gold bars.

The propagandists are trying with all their might to lead their readers to the idea that the referendum in Crimea does not matter, and the goal of the “invaders” is to deprive Ukraine of its wealth that would make the population “independent” richer than other Saudi sheikhs. It is only strange that so far not a single Ukrainian government has bothered with oil and gold, and the Crimea has grown sick year after year. Like it or not, a referendum on joining Russia did not arise out of nowhere. The situation had to.

However, arguments are the last thing propagandists tend to operate on. The first thing they turn to is emotion. “Oh, Russian villains!” - this is the most mild form of reaction that customers of these absurd fakes expect from online readers.

December 12 on the Ukrainian site "Nazpravdi" a note appeared that exposes the “information” about the discovery of a huge gold-bearing field in the Crimea.

According to the sensible journalist Ivan Sashenko, reading this news "can cause serious harm to the health of nationally concerned citizens of Ukraine."

Further, the author quotes a story that has been distributed in Ukrainian editions:

“On the territory of the Crimea peninsula, Russian geologists have discovered the largest gold-bearing deposit, which, according to preliminary estimates by experts, makes up more than 60-70% of all gold mined in the world. Thus, the Crimean deposit becomes the largest source of gold on the planet, having overtaken the previous record holder, Witwatersrand (South Africa), by all indicators, and the gold mining will be several times easier due to the release of highly concentrated gold-bearing veins close to the surface.

The fact that Crimea for Russia becomes truly golden and a source of incredible financial opportunities becomes unquestionable. ”

(Dear “VO” readers, do not send error messages to administrators about spelling errors. We decided to keep the original propaganda phrase “for true” stories.)

Ivan Sashenko calls on those Ukrainian citizens who have managed not to be damaged by reason, to realize that this story is a fake. And he refers to the news of the same kind that narrate in the invasion of Russian special forces in the Donbass.

The call is reasonable, but will it reach the goal? Indeed, if there is already a whole audience, personally observing what is not, then calls for rational behavior will hardly help.

16 December 2015 of the other fake riches of Crimea warned portal "Journalistic Truth".

According to the site’s journalist Mikhail Onufienko, sensational reports about fabulous Crimean riches began to appear in Turkey. The press talks about the Dzhankoy oil field, supposedly already being developed by the Russians. This field supposedly puts the Crimea on the same level with Saudi Arabia.

Ukrainian media, telling about the riches escaping the Ukrainian people, provide a link to the Turkish state radio publication Türkiye'ninSesiRadyosu (Voice of Turkey).

“According to preliminary estimates by international experts, oil reserves in this area are estimated at 7,5-11 billion tons of oil, which makes the Crimean peninsula a small Saudi Arabia,” a source quotes. - And that's not counting the huge resources of the accompanying gas. Moreover, the depth of the oil is not very high, which will undoubtedly be the cause of its extremely low cost. ”

Why so surprising data?

It turns out that "geophysical work showed an incredible result: an extensive oil-bearing layer extends from Strelkovsky to Zadornensky deposits of the Crimea, and work is still underway to determine the exact boundaries of the Crimean oil" underground sea ".

The secret around the giant field is explained by the intrigues of the Russians. The Kremlin "is trying to carefully conceal the results of its discovery, classifying all data on the work carried out."

And yet, apparently, the watchful Ukrainian-Turkish press has made some progress in the investigation, for it is reported that it is difficult to “conceal such major successes achieved in the Crimea.”

“Journalistic truth” reminds that the Dzhankoy oil field does not exist, but in 1962 and 1964. Industrial gas fields were discovered in the Dzhankoye and Strelkovskoye (on the Arabatskaya Strelka).

Likelihood to another injection gives the fact that in the Crimea, oil is in fact. But far from Saudi scale. “The oil outlets on the Kerch Peninsula in the Crimea have been known since ancient times,” recalls the same author. - The first wells were drilled here in the 60-s of the XIX century. Limited volumes of oil were obtained mainly from the Chokrak and Karagan deposits of the Neogene period. ”

There is one more thing that can be called the cause of "oil" stuffing.

A statement by the Ukrainian Foreign Ministry on this issue reports that towing two Chernomyneftegaz drilling rigs from the Odessa gas field is regarded by Kiev as “another episode of large-scale robbery of property and natural resources” of Ukraine from Moscow. The Ministry of Foreign Affairs of Ukraine believes that these rigs were the property of Ukraine. Kiev does not recognize the annexation of the Crimea to the Russian Federation, and Chernomorneftegaz was nationalized after the Peninsula became part of Russia, therefore the Ukrainian Foreign Ministry claims that Ukraine’s sovereign rights to explore and develop natural resources in its territorial waters and offshore were violated (which is guaranteed by the UN Convention on Maritime right).

Drilling rigs, RBC recalls, were towed from neutral waters to Russian territorial waters off the coast of Crimea on December 14, 2015. The company Chernomorneftegaz said that the ship with the Turkish flag tried to block the caravan, and it had to be driven off by a FSB Border Guard boat and a Black Sea missile boat fleet. However, the FSB Border Service has denied this statement. Border guards said the Turkish ship followed the recommendations of the Black Sea Fleet ship, changed course and parted with the caravan.

It is easy to understand the goals pursued by Ukraine, telling stories about gold deposits and the oil wealth of the “annexed” Crimea. It is more difficult to determine what tasks the Turkish press is solving, if only it actually joined the campaign of the Ukrainian fake.

However, it is possible to assume something. Namely, the fact that Ankara is trying to distract the attention of the world community about the scandalous oil trade of the family of President Erdogan with the militants of "IG": information about these affairs is often held in the major media. And they write about it not only in Russia, but also in the West. In addition, the recent invasion of Turkish armored vehicles in Iraq is also, as analysts believe, happened with oil targets. If it has become more difficult for the Turks to “work” in Syria, you must defend at least a business with pipes in Iraq.

Someone is trying to close the image of the dirty Turkish image with episodes about the robbery of the unfortunate Ukraine by the Russians. They took away, they say, the Crimea, and now they suck oil from the depths and dig tons of gold. Of course, the oil actions that the Erdogan family conducts solely for the purpose of replenishing the budget and containing 1,5 million Syrian refugee refugees are just a good thing compared to the sins of Russians who take foreign territories, wealth and even property simply because the owners of the Kremlin are Russia seemed cramped.

Do not happen, it is clear Ukrainians sheikhs.

Observed and commented on Oleg Chuvakin
- especially for topwar.ru
Ctrl Enter
Noticed oshЫbku Highlight text and press. Ctrl + Enter
We are
Iran in the Syrian conflict. The confrontation with Saudi Arabia and the interests of the ShiitesAir Force and Saudi Arabia
135 comments
Information
Dear reader, to leave comments on the publication, you must to register.